The Crimson skated in a Tuesday night affair with the ECAC-rival Engineers, only to reach a draw after 65 minutes of play 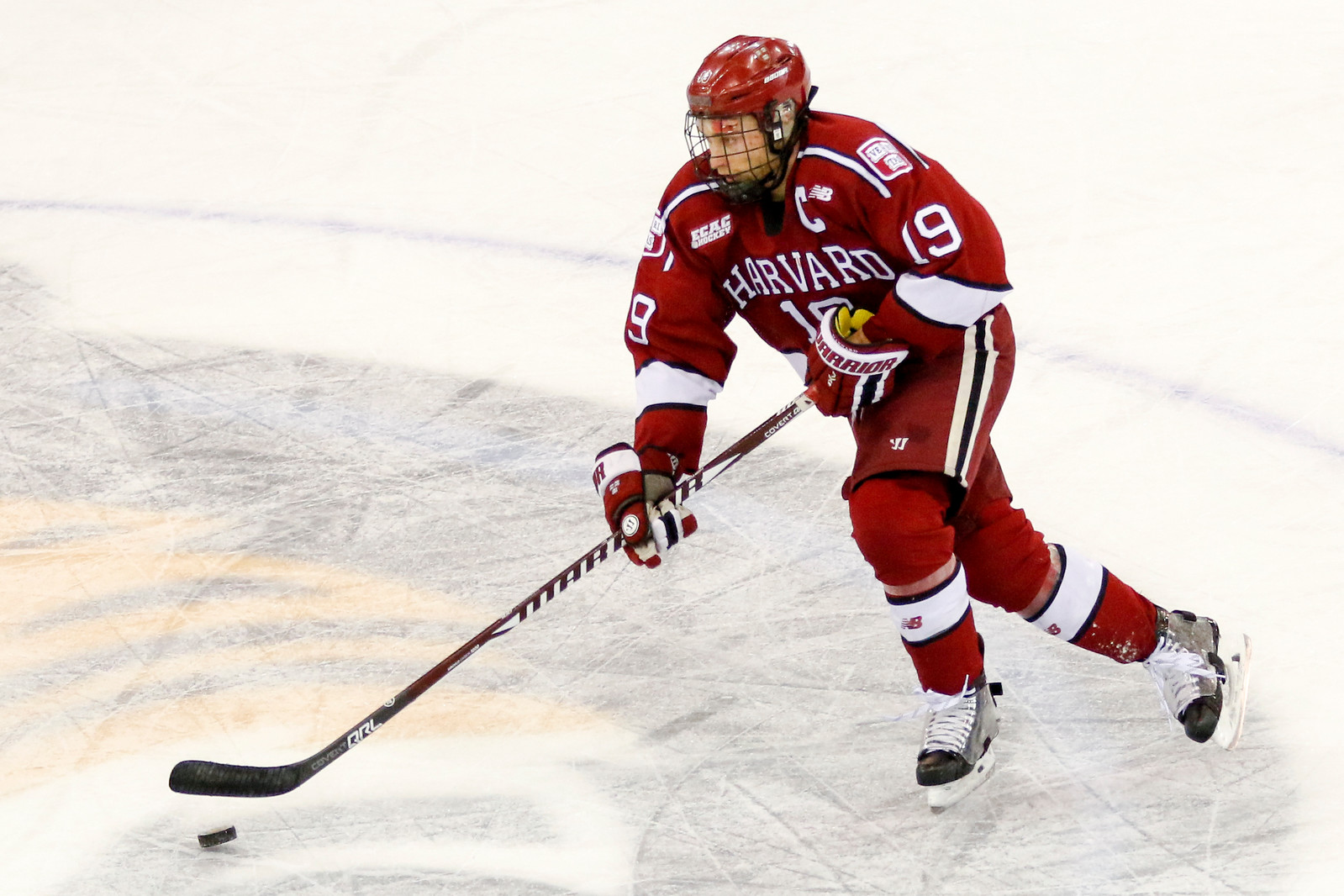 Tri-captain Jake Horton put forth a two-point performance (1-1—2) in Tuesday night's draw with RPI. The senior picked up the secondary assist on linemate Michael Floodstrand's tally and added a goal of his own by deflecting a slapshot from the point past goaltender Linden Marshall. By Timothy R. O'Meara
By Spencer R. Morris, Crimson Staff Writer

After a nine-game road stretch spanning all of November and December, the Harvard men’s hockey team undoubtedly was glad to stay put in Cambridge for a pair of home contests last weekend. On top of that, the squad nabbed a pair of conference wins and climbed back over .500 for the first time since before the away streak.

“You have to adjust your schedule a little bit [for mid-week games],” tri-captain Jake Horton noted. “I wouldn’t say it had a major impact on us. The only other thing would be that we’re playing more games in a shorter amount of time than we usually do, but I don’t think that’s any excuse or distraction.”

Harvard carried play for much of the game and outshot the Engineers, 47-21, but the teams skated to an even 2-2 score after 65 minutes of hockey in the Crimson’s second straight overtime affair. The ECAC foes traded scores in the first 40 minutes of play and entered the third frame even at one. In the final third of regulation, each team lit the lamp en route to a stalemate.

Considering Harvard’s ice-tilting efforts, it appeared that the Crimson would run away with the game after gaining the lead early in the final period when a Horton deflection found twine. But RPI captain Jared Wilson, the main culprit of his team’s earlier penalty troubles, had other plans.

The senior defenseman fired a slapshot from the blue line that beat Harvard tri-captain Merrick Madsen. And just like that, the tilt was tied at two goals apiece, where it would remain after a five-minute overtime period.

“I don’t have an issue with the work ethic or the attitude,” said Crimson coach Ted Donato ’91 of Tuesday night’s performance. “[If we had] executed and taken advantage of some of our opportunities, especially earlier in the game, we wouldn’t be sitting there looking at a tie after 65 minutes.”

A goal from captain Viktor Liljegren just five minutes into the contest gave RPI a lead after one period. The visitors, though, continued to throw a ton of rubber at Engineers net-minder Linden Marshall in an effort to notch the game. It took 36 minutes and 25 shots, but Harvard finally broke through on a one-timer from junior forward Michael Floodstrand.

“We knew we were peppering [Marshall],” Horton said. “It was only a matter of time before one found the back of the net. That was big-time when [Floodstrand] found the back on that first goal…to get us rolling.” 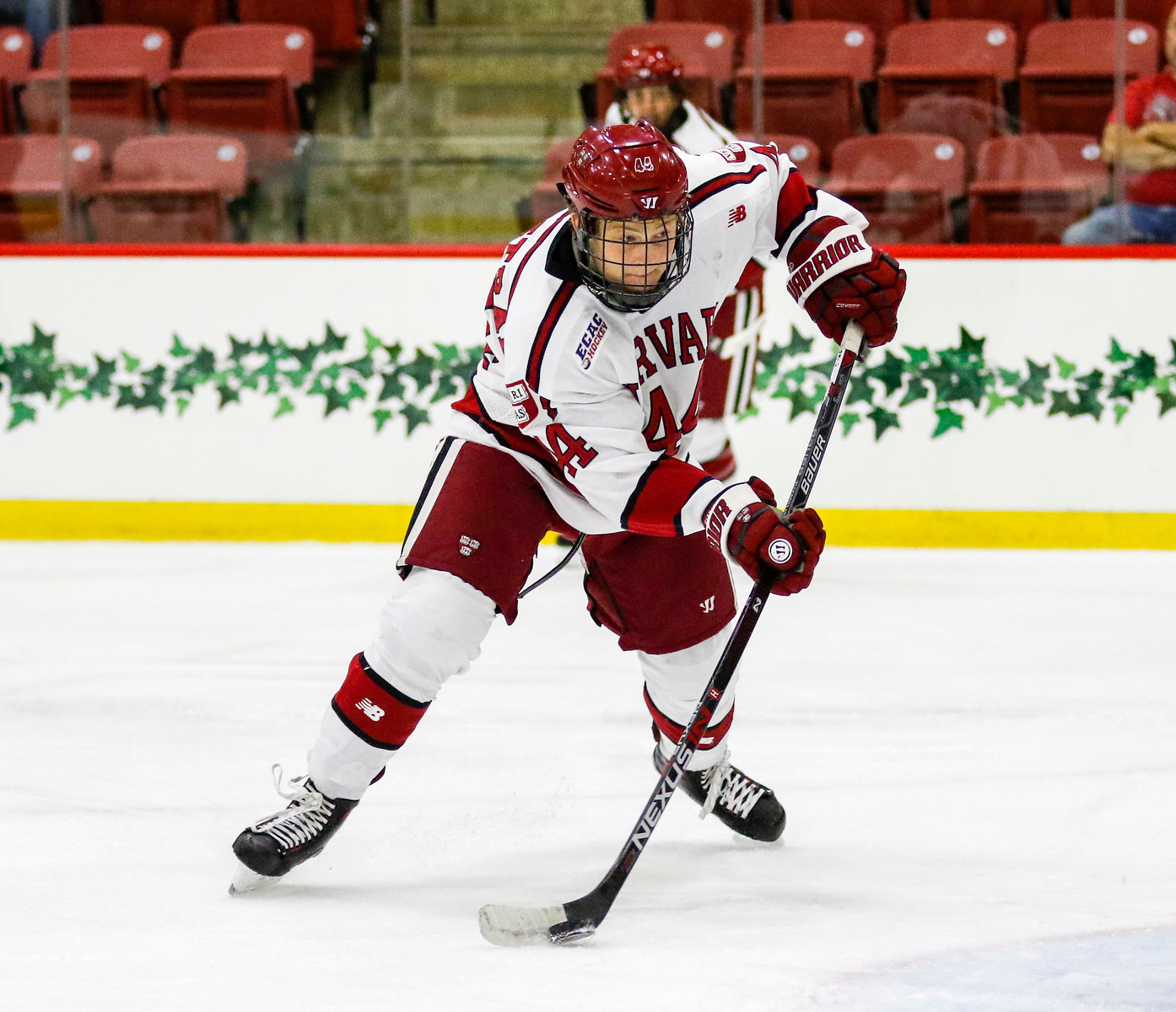 Junior forward Michael Floodstrand opened the scoring for the Crimson on Tuesday night and has found twine in each of his last two games. Secondary scoring will be a key to Harvard's success as it enters the second half of its season. By Timothy R. O'Meara

Sophomore blue-liner Adam Fox, making his return to the lineup after a four-game absence while at the IIHF World Junior Championship, took the puck down the right side before picking his head up and finding Floodstrand with a cross-ice feed.

“[Fox] just plays with so much poise, and he’s such a great mover of the puck out of our zone and in the offensive zone,” coach Donato said. “Any time you can add those elements to your team, it’s a big boost.”

The junior wasted no time and buried the puck short-side, good for his second goal in as many games and his third strike of the season.

Floodstrand’s tally alleviated a mounting frustration on the Crimson bench, as the team trailed despite carrying play. This frustration peaked in the middle of the second period, when Harvard failed to cash in on an extended man-up opportunity.

“We did hit two posts on that five-on-three,” coach Donato said. “But we feel like we can execute better.”

After avoiding catastrophe on the extended Crimson power play, RPI further acquainted itself with the sin bin, heading to the box a total of six times before the final horn sounded. Of these half-dozen trips to the box, Wilson, owner of the game-tying goal, accounted for half of them.

These discipline troubles were relatively uncharacteristic for the Engineers, who entered the game averaging the seventh-fewest penalty minutes per game (9.52) of the 60 Division-I teams.

The 2-2 draw snapped multiple streaks, some good and some bad: the Engineers ended their six-game losing skid, while the Crimson’s stretch of consecutive victories ceased at three. On an individual level, Harvard junior forward Ryan Donato saw his season-long point streak of 14 games come to a close.

While a tie still earns the Crimson a point in the ECAC standings, the squad saw an opportunity for the full two points on Tuesday night and remains frustrated that it left upstate New York without the victory. Strong efforts against conference foes will remain vital as the year progresses, as Harvard will battle ECAC teams in 12 of its final 14 regular season games.

“We know what type of effort and games are going to be played in the ECAC,” Horton said. “We knew it was going to be a hard-fought game tonight…and their goaltending has always given us some issues, so we didn’t come in at all underestimating them. But it’s definitely frustrating for us just because we felt that we played a great game. Maybe we just didn’t execute as well as we could have.”