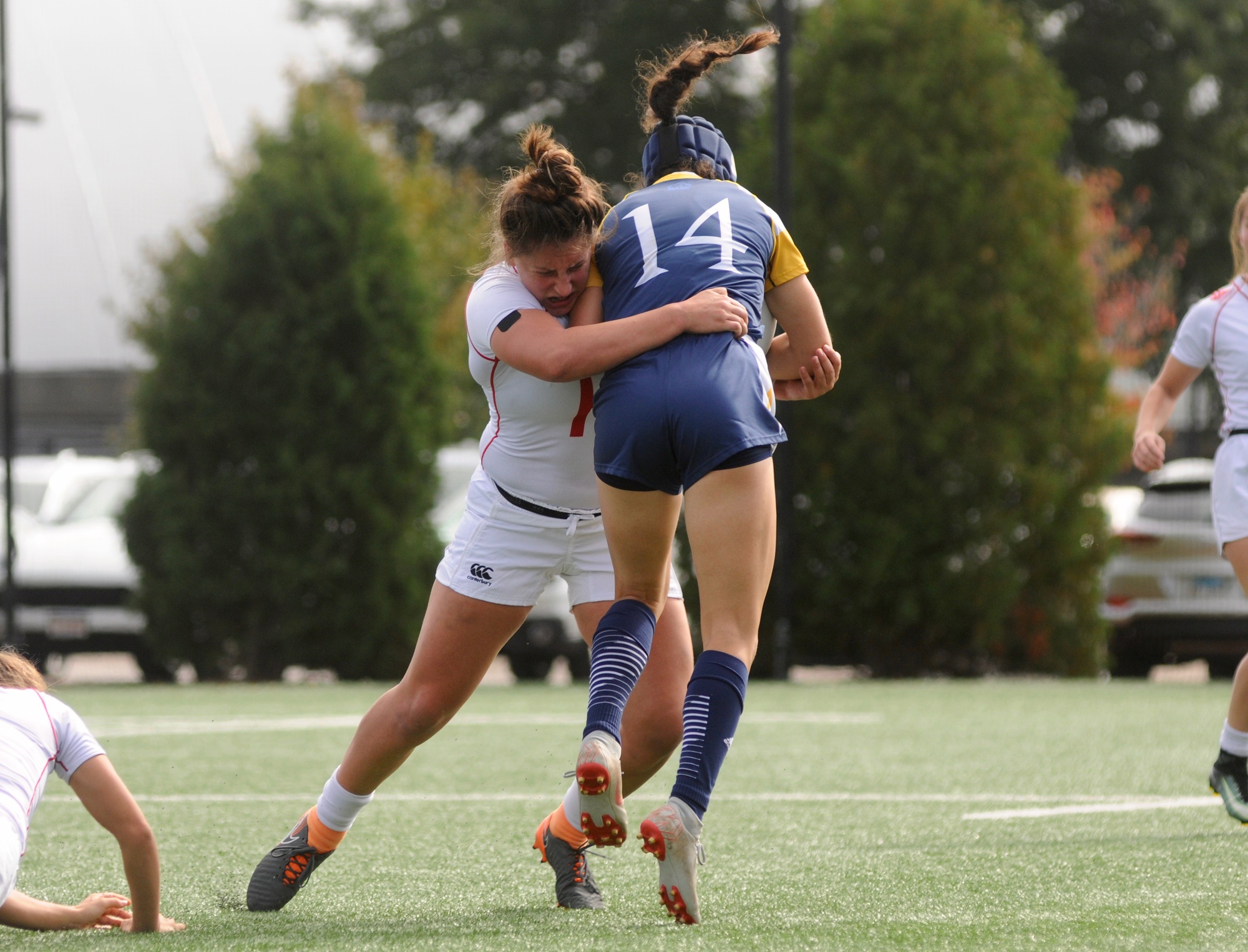 With the win on the weekend, the rugby team moves to 3-1 on the season. By Henry Zhu
By Lucy Connor, Contributing Writer

Harvard women’s rugby dominated Quinnipiac for the second time this season on Saturday with a 24-21 win. The Bobcats scored twice late in the game — one try with 14 minutes left and the other with only a minute left — but the Crimson (3-1) maintained its composure and was able to hold Quinnipiac (2-3) off for its third victory of the season.

“Obviously at the end when things like that happen, we have to keep our composure,” Harvard freshman Sofie Fella said. “One of the things we’ve been working on is managing to stay calm and composed but still keeping that intensity and fire.”

The intensity and fire was high for Harvard right of the bat and was maintained throughout the entire game. The Crimson kept possession and pushed the Bobcats to their defensive side for the first ten minutes, but a breakaway sprint by Quinnipiac freshman fullback Allison Koenig resulted in the first try of the game. However, Harvard senior Caitlin Weigel immediately responded with a try, and senior Jenny Kronish’s conversion points were good to tie the game 7-7. After another long offensive possession, Harvard junior Robyn Beese muscled through the pack for another try, pushing the Crimson to a 14-7 lead at the half.

The first frame consisted of many great Harvard defensive plays. Coming off a tough loss to Dartmouth, it was clear to Harvard that its defense needed to see significant improvements to seal a win against Quinnipiac. The defensive tone was set early with multiple important tackles and forced turnovers.

“The times we kept them off was really impressive,” Beese said. “We felt like a completely different team out there compared to our last game against Dartmouth.”

Harvard ended the first half with all of the momentum and did not let that go with the start of the second. The lead extended with another Crimson try within the first few minutes of the second half, when Fella sprinted through all of the Quinnipiac defenders. Unfortunately, the placement of Fella’s touch when she scored proved to be a tough angle for Kronish, and Harvard could not clutch the conversion points. The same sequence of events occurred about ten minutes later when senior Grace Chao pushed through the Bobcats’ defense for the last Harvard try of the game, but the Crimson failed to seal the conversion points.

Immediately following the Harvard try, there was an amazing breakaway sprint by Harvard senior Susie Clements, but Quinnipiac was finally able to get a stop and punt the ball to safety. Following this defensive feat, the Bobcats were able to get the ball in the end zone to tighten up their deficit to 24-14. For a few minutes, it looked like Quinnipiac might have gained back the momentum and were going to make a push for a comeback.

“It’s so easy for us to get frantic in that situation because it’s nearing the end of the game,”Robyn Beese said. “[But] for us to keep our heads on like connect with each other and encourage each other every scrum I think just showed our mental toughness and our mental edge over the game today.”

Ultimately, it was the improved Harvard defense that continued to come up with one stop after another, and were able to hold Quinnipiac off for the majority of the second half. Harvard senior Caitlin Weigel came up big with a great defensive stop and got the ball out of Harvard’s end zone with about eight minutes left after a long offensive push by the Bobcats.

Ultimately, with one minute left, Quinnipiac scored again, but at that point the game was almost certainly going to end with Harvard on top.

For Fella, what stood out most to her was not that she extended her streak of consecutive tries to four games — it was the performance of the walk-ons.

“[The walk-ons] all did really well for their first ever rugby game.” Beese added.“[They were] the people who were able to adjust and really put a competitive edge on this game.”