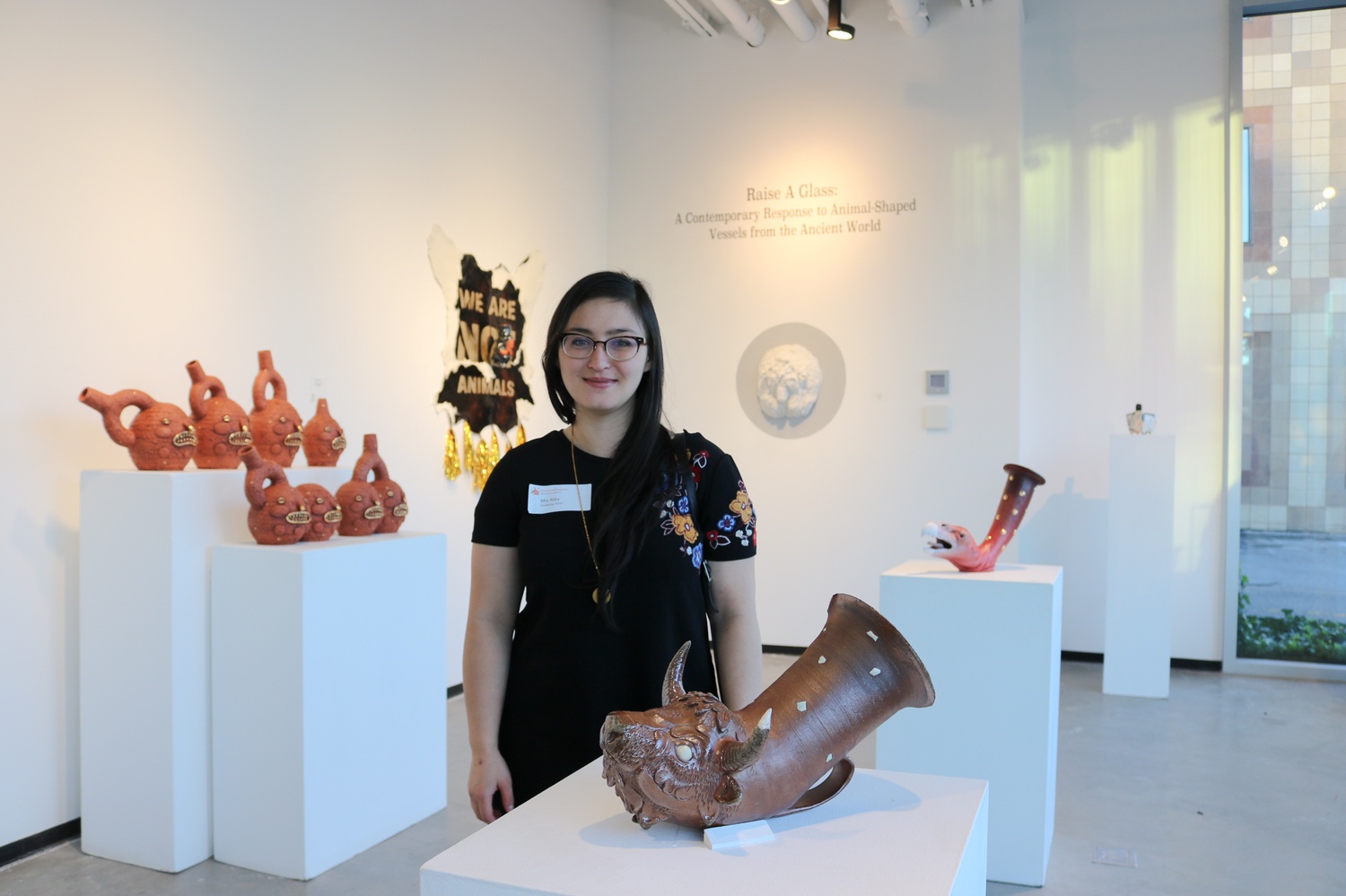 Mia Riley, artist By Courtesy of Darrah Bowden for the Ceramics Program, Office for the Arts at Harvard
By Alexandra C. Kim

On Oct.13, the Harvard Ceramics Studio in Allston hosted an opening reception and public demonstration for their newest exhibition, “Raise a Glass: A Contemporary Response to Animal-Shaped Vessels from the Ancient World.” The exhibition is inspired by a current exhibition at the Harvard Art Museums, “Animal-Shaped Vessels from the Ancient World: Feasting with Gods, Heroes, and Kings,” which offers a collection of various vessels shaped as animals — both real and imagined — that were once used as drinking horns and pitchers. The Harvard Ceramic Program takes a contemporary spin on the collection of ancient vessels.

Kathy King, Director of Education at the Ceramics Program, curated this exhibit, amassing a grouping of work from 15 different artists for “Raise a Glass.” She said she asked these artists to create their own interpretation of vessels inspired by the ancient ones currently on view at The Harvard Art Museums.

“I wanted to find artists that I knew either had worked with animal imagery in some way, or for whom it would be really interesting to give this kind of assignment,” King said.

The artists displayed at the Ceramics Studio are chosen from contemporary sculptors and vessel makers from around the world. Except for one piece made of silver, all of the works are made of clay or at least have some clay component. Other than this commonality in material, each artist found their own unique interpretation of the ancient vessels and produced pieces that are vastly different from one another. One artist, Salvador Jimenez-Flores, constructed a contemporary piece with various media boldly mounted on the wall. A ceramic drinking vessel sits in the middle of a piece of animal hide hanging from the wall. The words “WE ARE NOT ANIMALS” are etched through the hide in block lettering, and bright gold tassels hang below.

By contrast, artist Mia Riley created a work titled “Wolf Spirit Rhyton” that is reminiscent of traditional East Asian art. A wolf’s head opens up into a drinking vessel. The piece is coated in a celadon-like glaze and decorated with delicate carvings. Not only is this piece a nod to her Asian heritage, the animals she chose are very relevant to her upbringing in Canada.

“The wolf and the bison are two animals that have a lot of cultural presence where I’m from,” she said. Because Riley said there is not a lot of indigenous pottery where she is from in Alberta, Canada, she uses the concept of the animal head to realize what “a more spiritual piece of pottery might look like... because we don’t necessarily have that legacy of traditional terracotta.”

Around five or six of the contributing artists attended the opening reception and three artists even said a few words about their pieces and process during the opening reception gallery talk. In addition to hearing about process, the reception offered attendees the opportunity to physically interact with the process by producing their own animal shaped vessel. Tables were set up with small molds and terracotta clay. Guided by a few ceramicists, the public could experiment with making their very own piece.

The “Raise a Glass” exhibition is not only inspired by the exhibition at the Harvard Art Museums. It also exists in conversation with the “Animal-shaped Vessels” exhibit. The curator of the Animal Shaped Vessels exhibit Susanne Ebbinghaus spoke about how the exhibition centers around different cultures interpretation of vessels.

King also spoke about the two exhibitions in relation to one another. Over the one and a half years spent working on the exhibition, she had not seen the ancient vessels now on view at the Museum in person. After working on this upcoming exhibition and staring at images of the vessels for such a long time, King said she started crying when she first went into the show.

When King recruited these artists, she said she put very few limits on what they could or could not produce. As a result, the exhibition displays a diverse range of styles and mediums. Linked through a shared inspiration, the “Raise a Glass” exhibition shares different stories, backgrounds, and interpretations. The opening reception is a particular highlight of this exhibit, given the interactive component. As King said: “It’s a great mix to get people to get beyond the austere museum setting and really experience the work.”