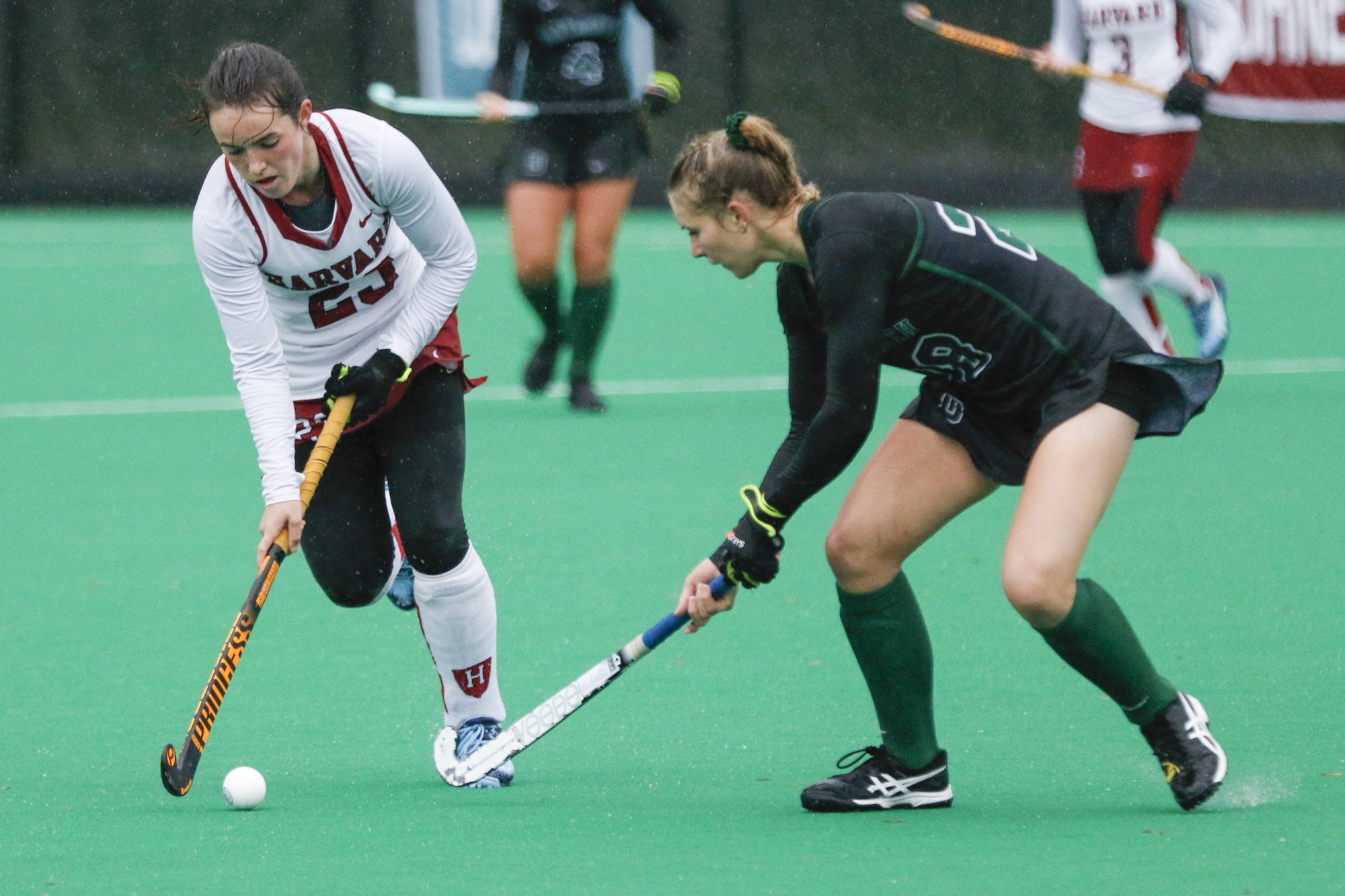 The Crimson's 6-0 shutout win over Dartmouth guarantees itself a share of the title no matter the results of the final weekend of play. By Timothy R. O'Meara
By Ben Stern, Contributing Writer

The No. 6 Harvard field hockey team added to its ledger of achievements on Saturday, notching a 6-0 win over Dartmouth to earn at least a share of the 2018 Ivy League title. Extending a program-record win streak to 12, the Crimson also clinched a berth in the NCAA tournament. The postseason appearance will be the program’s second in the last three years and sixth all-time.

“It feels amazing,” sophomore midfielder Tessel Huibregtsen said. “We have such a strong team and even under these conditions — away game, bad weather, and the pressure of being to secure the share of a championship — we can execute our plans.”

Harvard (15-1, 6-0 Ivy) dominated the entire game despite the frigid, rainy conditions, putting 21 shots on goal. The Big Green (6-9, 2-4) managed only one, which was handled easily by freshman goalkeeper Ellie Shahbo. Shahbo has now won her last nine starts and conceded only three goals in that stretch.

“My defense makes it very easy for me,” Shahbo said with a laugh. “I don’t actually have to do that much. I was just sitting around getting cold today.”

Junior midfielder Casey Allen opened the scoring at 22:15 with a quick finish at the end of a penalty corner sequence, and junior forward Maddie Earle followed with a goal of her own a few minutes later.

The Crimson entered the locker room at half nursing a 2-0 lead and looking for insurance. It got it from Allen, who found the net again at 39:49 to put Harvard up 3-0 and later tallied an assist to finish with a career-high five points.

Senior back Olivia Allin whipped a shot into the top shelf shortly after, and Earle then scored again to put the game essentially out of reach. Earle’s pair pushed her season total to 14 goals, and she now sits atop the Ivy League leaderboard in the category.

Junior midfielder Bente van Vlijmen put the cherry on top of the win with a turnaround flick into the cage at 66:41. The Dutch native was on the prowl all afternoon, pacing the team with eight shots, all on goal.

“One of our big mottoes this year is ‘next five minutes’ and just stay focused,” van Vlijmen said. “We were all super happy.”

Clearly, she took that message to heart on Saturday, when neither sleet nor the efforts of Big Green senior goalkeeper Hailey Valerio could prevent her from eventually breaking through for a goal.

For the team’s leadership, the moment was even more special. The program won a banner in 2016, but after a disappointing 2017 season, the seniors are thrilled to be back on top.

“The growth over the past four years has been fantastic, and it has been an honor to be a part of it with my senior classmates,” co-captain Kathleen Young said. “This season we’ve seen success because our goals have been process-based. Our team goal is to improve every game and . . . see what the outcome is at the end of the game.”

Head coach Tjerk van Herwaarden was proud of his squad.

“We knew what [this game] was going to be, and we mentally prepared for it,” van Herwaarden said. “This team is on a mission. We did a good job of being able to control the controllables.”

As excited as they are, the players acknowledge that their work is not done yet. The Crimson will honor its seniors as it takes on Columbia on Nov. 3 on its home turf, where it is undefeated this season. Harvard spoiled Dartmouth’s senior game, and it will try to ensure that the Lions can’t return the favor. With a win, the Crimson will gain sole possession of the Ivy League throne, and the whole program is hungry.

“We didn’t celebrate too much today,” van Herwaarden said. “We want to win outright on our home field. We don’t want to share this title with anyone.”