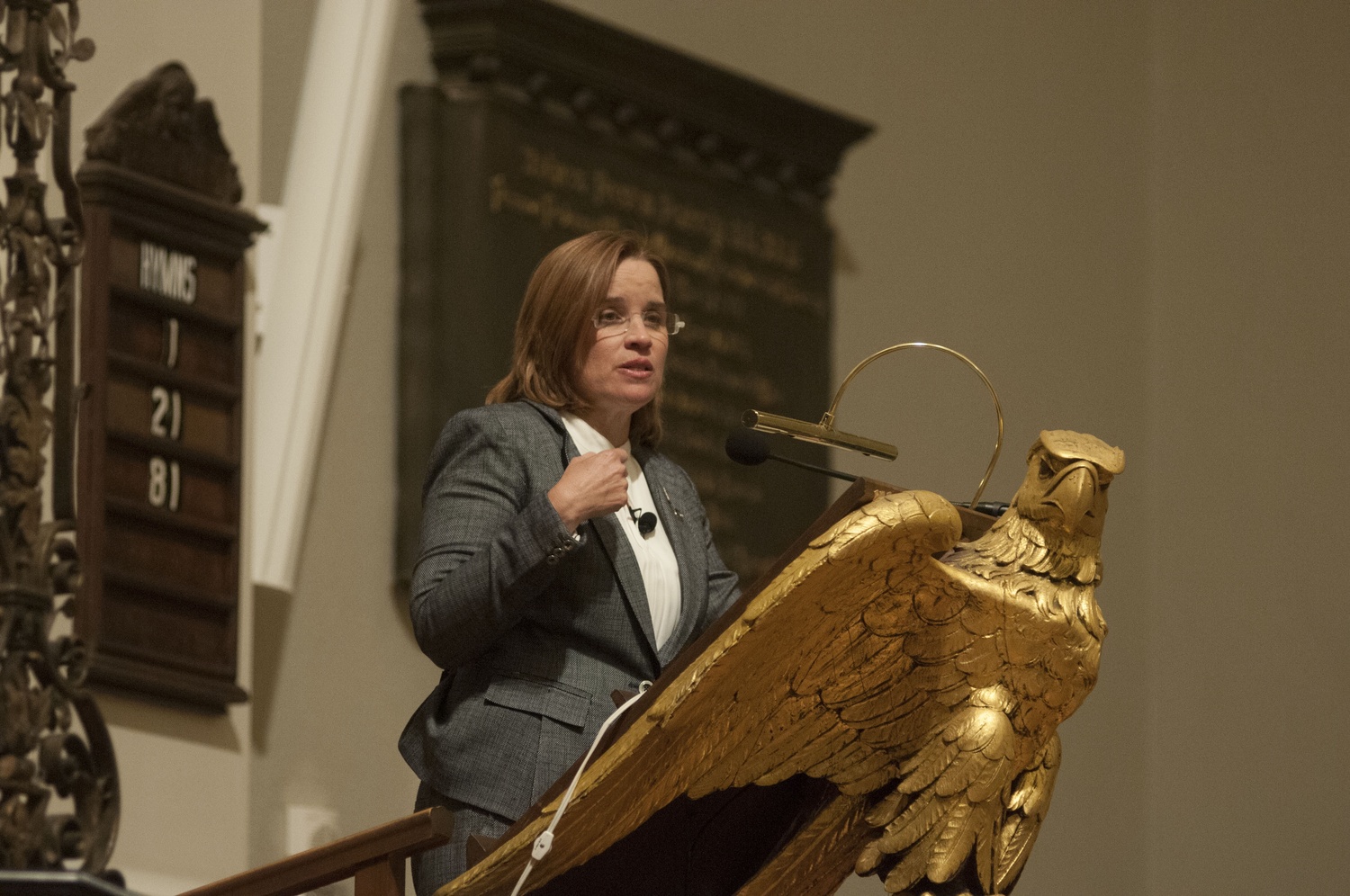 Cruz, who garnered national attention for her criticisms of the Trump administration's response to Hurricane Maria in 2017, is the first Latina woman to receive this public service honor.

In her lecture, Cruz described the hurricane’s devastation, condemned the federal government’s “neglect” of the island, and urged the audience to “tell the inconvenient truth” and serve those who are suffering during humanitarian crises.

During the program, Mayor of Cambridge Marc C. McGovern presented Cruz with a key to the City of Cambridge. His introduced his fellow mayor, citing her advocacy for marginalized groups including the BGLTQ and deaf communities.

“I’m a social worker in my background, and seeing the way that—just your passion and the way that you treat people in your community is wonderful,” McGovern said. “I think there are a few folks down in DC who might learn a thing or two from you.”

The festivities also included a bomba and spoken poetry performance celebrating Puerto Rican culture, and a special guest: Robert Coles ’50, a professor emeritus, author, and psychiatrist for whom the event is named, was in attendance and received a standing ovation.

Cruz described Hurricane Maria's impact in Puerto Rico as something that “no human being should have to experience.”

“We experienced darkness. We experienced hatred. We experienced discrimination and literally were left to die,” Cruz said. “‘Somebody help us,’ was my cry. I am begging you. Mayday. S.O.S. We are dying here. And you are killing us with your bureaucracy and your inefficiency.”

Both deep emotion and light-hearted joy characterized the evening. Cruz’s voice cracked audibly while describing Puerto Rico’s lack of clean bathrooms and textbooks for school children, and she also twice led the audience into song with Aretha Franklin’s “Respect” and Michael Jackson’s “Man in the Mirror.”

After the event, Cruz said she remained optimistic for a more compassionate approach to policy-making.

“We are living in difficult times, but everywhere you look, there are people willing to do what it takes to change them, and to make them inclusive, and to have diversity be at the forefront of the way that they make policies,” Cruz said. “We all have to find a way to join together and have a big caravan of hope that will lead us into pushing agencies that are for the common good.”

After audience member Adebola S. Yakubu-Owolewa ’05 asked Cruz if she had considered running for the presidency in 2020, Cruz explained that her birth in a U.S. territory disqualified her from seeking that office. Even if she could, Cruz said, the job would not interest her.

“I wouldn’t want that job,” she said. “Sometimes the higher you go in office the more distant you are from the people.”

Yakubu-Owolewa said that she felt Cruz’s work with marginalized communities would have made her a strong candidate.

“In the U.S., or anywhere, you only are going to treat people as well as you treat the most marginalized and vulnerable people. She has seen that in Puerto Rico, and she has fought tirelessly,” Yakubu-Owolewa said.

Michael C. A. Leonard ’17, nonprofit management fellow and project manager of the lecture and award, said that the decision to honor Cruz was confirmed this August.

“We do a long selection and ranking process and reach out to our candidates after that. There are students and staff in the room and we try our best to reach a consensus,” Leonard said. “It was pretty easy this year.”

Cruz said that she hopes to continue collaboration and contact with PBHA.

“Often, whenever we go to a particular place, something sparks up a light that allows us to make connections and go back, so we go back, we take a look at them and then try to reconnect,” Cruz said. “But certainly, the Phillips Brooks House initiative is something that we’d like to kind of copy and see how we can do alliances with them to move forward.”

—Staff writer Liana E. Chow can be reached at liana.chow@thecrimson.com.