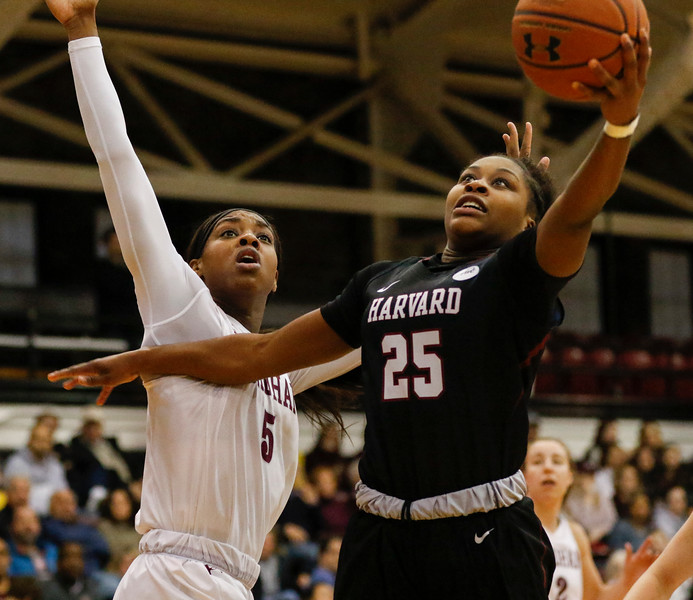 La Salle was no match for senior guard Sydney Skinner and company, with Harvard taking the contest 86-43. By Timothy R. O'Meara
By Kostas Tingos, Contributing Writer

With 8:11 to go in the third quarter, captain Sydney Skinner missed a three pointer from the right wing but then quickly grabbed her own rebound and made a flashy touch pass to sophomore forward Jadyn Bush. Bush finished the basket, got fouled, and completed the three-point play as the crowd erupted.

Skinner’s heads-up play was representative of Wednesday night’s contest between Harvard and La Salle. The Crimson always seemed to be one step ahead, trouncing the Explorers 86-43 in Cambridge.

Immediately off of the opening tip, La Salle (0-3) scored an easy layup to open up the scoring at Lavietes Pavilion. A few possessions later, sophomore guard Rayshel Brown overpowered junior guard Katie Benzan for the offensive rebound and layed it back in for two.

At this point, the Explorers led 4-2, but the winds shifted drastically soon after. Benzan quickly redeemed herself on the other end of the court, drilling a three from the top of the key to take the lead. From that moment on, Harvard (1-2) did not look back.

The team went on a blistering run to take control of the game, at one point leading 33-6.

The home team’s domination was highlighted by some eye-catching plays. Benzan, after fumbling to pick up a loose ball, delivered a pass from half court to junior forward Jeannie Boehm under the basket for two.

However, defense really fueled the Crimson’s run. Double-teaming a La Salle player in the post allowed the group to force a steal and get out in transition. The beneficiary of this play was Bush, who scored the layup.

“We love being on our home court, we play well here,” Coach Kathy Delaney-Smith said. “We are a very good shooting team. I have probably the best three point shooting threats we’ve ever had.”

The Explorers ended a 15-0 run with a hook shot in the lane, but Harvard’s response was a decisive one. Back-to-back three pointers from Skinner, followed by yet another triple from sophomore forward Rachel Levy, maintained the group’s momentum.

This dominant play continued in the second quarter. Yet again, Harvard’s defense stepped up to match its offense. A block by Boehm got the home bench to its feet and served as an exclamation point for the team’s defensive performance thus far.

The end of the second quarter featured little scoring, as both sides held the other in check. At the break, the Crimson took a 38-14 lead into the locker room.

La Salle came into the third frame in a zone defense, hoping to throw off Harvard’s rhythm. With six minutes left in the quarter the Explorers went on a mini run of their own. After picking off an inbounds pass, they quickly pushed the ball up the floor. A dish to guard Kayla Spruill resulted in a quick two for the freshman.

On the next Harvard possession the team settled for, and missed a three pointer. Again La Salle hurried the ball up the floor. This time a lapse in communication left freshman guard Shayla Sweeney wide open behind the arc, who made the Crimson pay.

This sparked a timeout from Delaney-Smith in order to halt the momentum shift. The tactic worked, as the team began to impose itself again.

This was especially true when it came to the offensive glass. Repeated efforts to secure offensive rebounds gave Harvard several second chance opportunities.

Bush provided a clearcut example of this. She tore down the rebound from her own miss, quickly putting the ball back up and in over the outstretched hands of an Explorer defender.

Good ball movement allowed sophomore forward Maddie Stuhlreyer to bank in a shot from the block to give the Crimson a 32 point lead after three quarters.

The fourth quarter offered much of the same. Several plays displayed the ball movement that Delaney-Smith has been preaching to her team.

On one occasion Harvard worked the ball around the key then found a wide open Stuhlreyer under the basket for two. Later on, the ball was dumped into the post from the right corner then immediately kicked out to the left corner to an awaiting Maggie McCarthy. The freshman guard and Massachusetts native knocked down a three and added five more points later in the quarter.

La Salle offered some resistance but its efforts were too little, too late. A steal by the Crimson on the last possession was a fitting way for the game to reach its conclusion.

That being said, the performance was not perfect by Harvard. In order to compete at an even higher level it will need to adjust its offense a bit and limit its turnovers.

“We are trying to play really fast,” Delaney-Smith said. “We look for eight second offense. At that pace you have to give up a little accuracy to do that. We just need to find out how to balance that.”

However, plenty of time remains in the season, and now the group has its first win under its belt.

“There were a few times where we started playing down to their level,” senior guard Kelsey Bogdan said. “At the end of the day we were able to come together, pick up our energy, and get it done.”