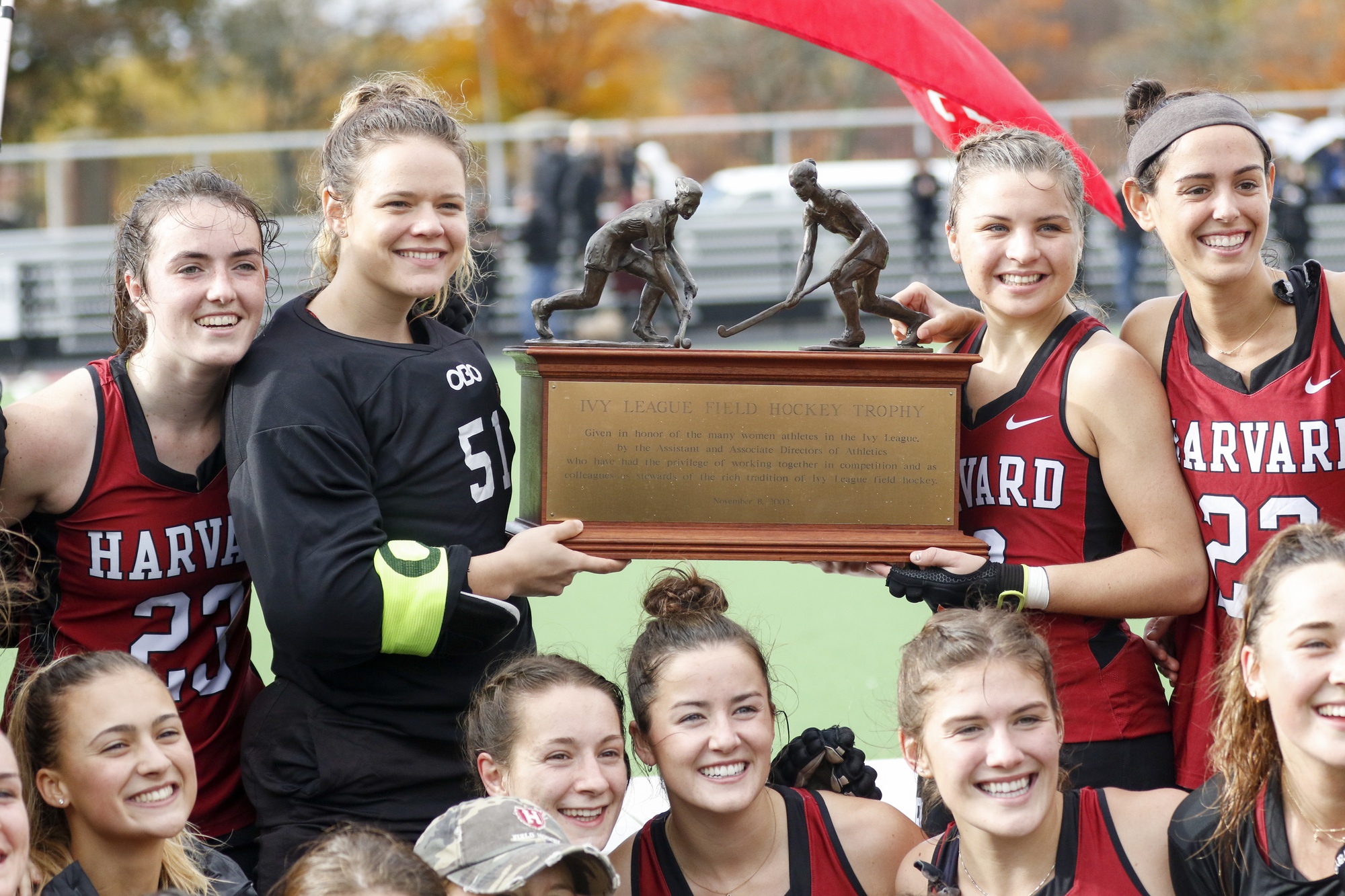 The field hockey team, ranked sixth in the nation, gathers around to pose with the Ivy League trophy. By Timothy R. O'Meara
By David Manikas, Contributing Writer

There was no better way for the Harvard field hockey team to end its 2018 regular season.

Prior to the noon start to the matchup between No. 6 Harvard (16-1, 7-0 Ivy) and Columbia (8-9, 2-5), fans and families filed into the bleachers to support the seniors playing in their last regular season home game.

“Coming into the game I was obviously a little upset but just proud to be a part of such an amazing season and such an amazing team,” said senior back Olivia Allin, who scored a goal in her final regular season outing.

Backs Allin and Brianna Bolon, midfielders Victoria Boylett and Emily Duarte, captain and forward Kathleen Young, and goalkeeper Libby Manela were the seniors honored prior to the start of the game.

“The senior class has been amazing. They took a chance on this program five years ago, when we were in a whole different ball game than we are in now,” head coach Tjerk van Herwaarden remarked. “They made this program what it is today by winning the Ivy League championships twice.”

Following the emotional senior day ceremony, the Crimson set its sights on the Lions, looking to continue its dominance over the Ivy League.

The final match of the season, although against a Columbia team that only won two games in the Ancient Eight this season, was just as important for Harvard as any other. The squad looked to claim the Ivy League title outright for the second time in three years by going undefeated in conference play. Furthermore, the team planned on riding its record-setting 12 game win streak into the NCAA tournament, which begins this coming weekend.

And dominate it did. The Crimson played up to its defensive standard on Saturday, keeping the visitors out of the scoring column for the seventh time this season. The shutout marked the end of a regular season homestand in which Harvard did not allow a single goal.

On the offensive side, the Crimson put on a stellar performance. The scoring began early as Allin opened the floodgates in the tenth minute on a penalty corner sequence. In the same half, freshman midfield Rachel Greenwood, assisted by junior forward Maddie Earle, laid out to extend to the ball and put one past the keeper. To round off first half scoring, Earle earned herself a goal shortly after picking up an assist, as a shot by sophomore midfielder Tessel Huibregtsen deflected off of her stick and into the net.

In the second half, goals by sophomore forward Natalie Sicher and Young sealed the fate of the game and the conference.

Sophomore midfielder Tessel Huibregtsen put one in between the legs of the keeper and into the back of the net in the 68th minute to round off the Crimson’s six goals, guaranteeing the squad sole possession of the Ivy League trophy following the final whistle.

Up next for the Crimson is the NCAA tournament, to which Harvard has an automatic bid after clinching the Ivy League. Currently ranked sixth in the nation, the Crimson is set to take on Penn State on Friday at 2:30 p.m.

In 2018, the Nittany Lions went 12-5 with a 6-2 record in the Big Ten. The team had a recent three-game winning streak before losing its regular season finale, 3-2, against Iowa. Penn State is led by freshman Anna Simon with 12 goals. Senior Moira Putsch paces the team with 29 points. Jenny Rizzo is the team’s primary goalkeeper and has held opposing offenses to 1.32 goals per game.

“We know we have the potential to do very well if we play our game and play for each other and that's going to be our goal going into the NCAAs” said Young, who is excited to enter the national playoffs with a talented roster.

Weighing into the decision of the team’s rank in the playoff was its undefeated stint in the Ancient Eight as well as its current 13-game win streak in which they defeated ranked teams such as No. 18 Maine, No. 24 Boston University, and No. 3 Princeton.

“We put ourselves in the best position to do damage,” van Herwaarden said. “We’re capable of competing with the best teams in this country.”