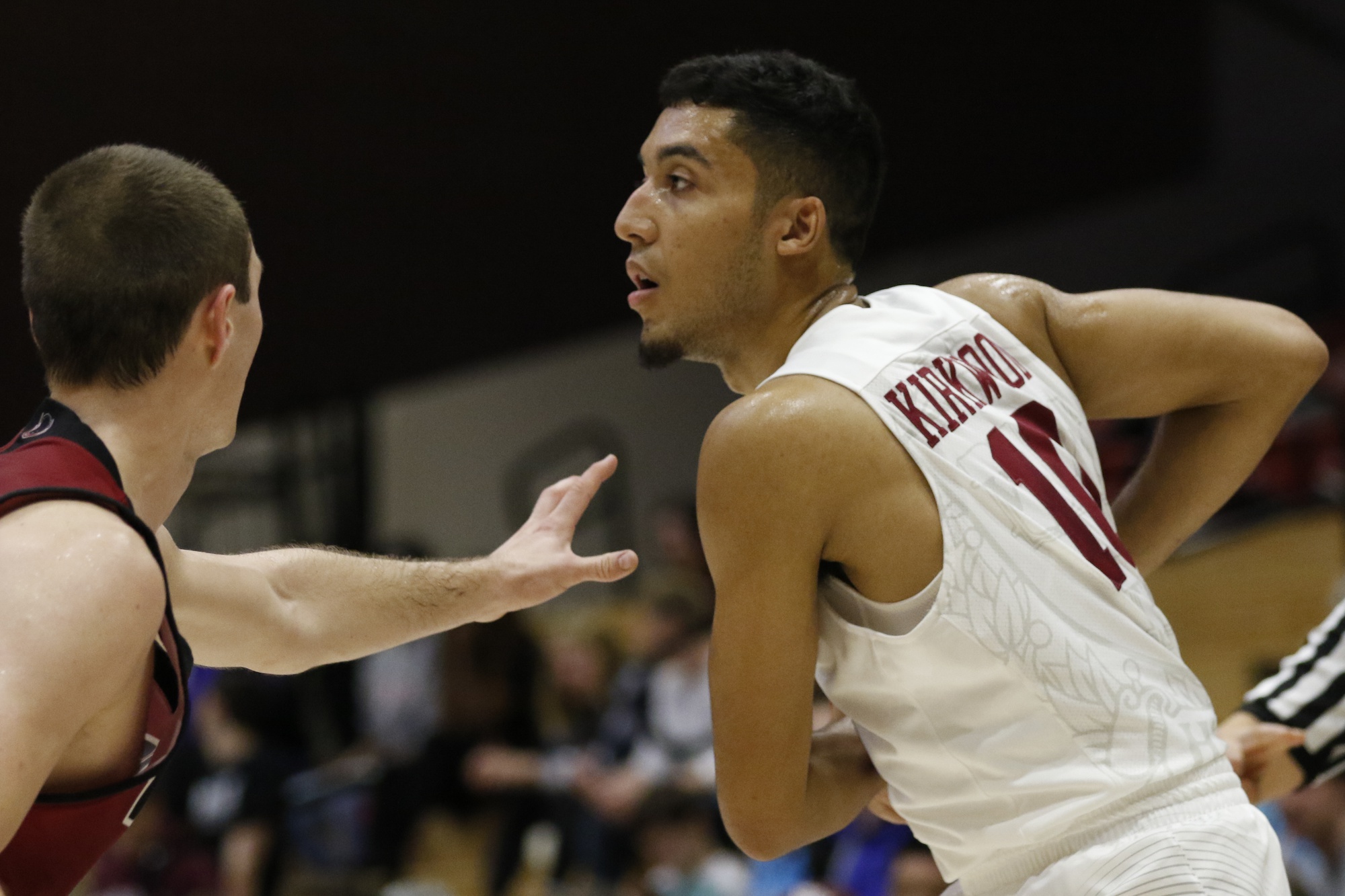 Hosting its Cambridge neighbors for the first contest of the year, Harvard men’s basketball took home the victory, 78-66, over MIT.

The Crimson (1-0) sprung the game wide open in the first four minutes of the second half, thanks to a string of eight points on four straight possessions from junior forward Chris Lewis, dominating the Engineers’ (0-1) post defense.

The first half of the game proved to be a stalemate, with each team trading blows in a fast-paced frame filled with scoring. It was Harvard, however, that seized the game early in the second half.

“I thought our run at the beginning of the second half was one of the keys to the game,” coach Tommy Amaker said.

Following the halftime break, Lewis re-entered the game. Having not played the previous eight minutes of game time due to foul trouble, he showed some signs of bench rust with an airballed floater down low. 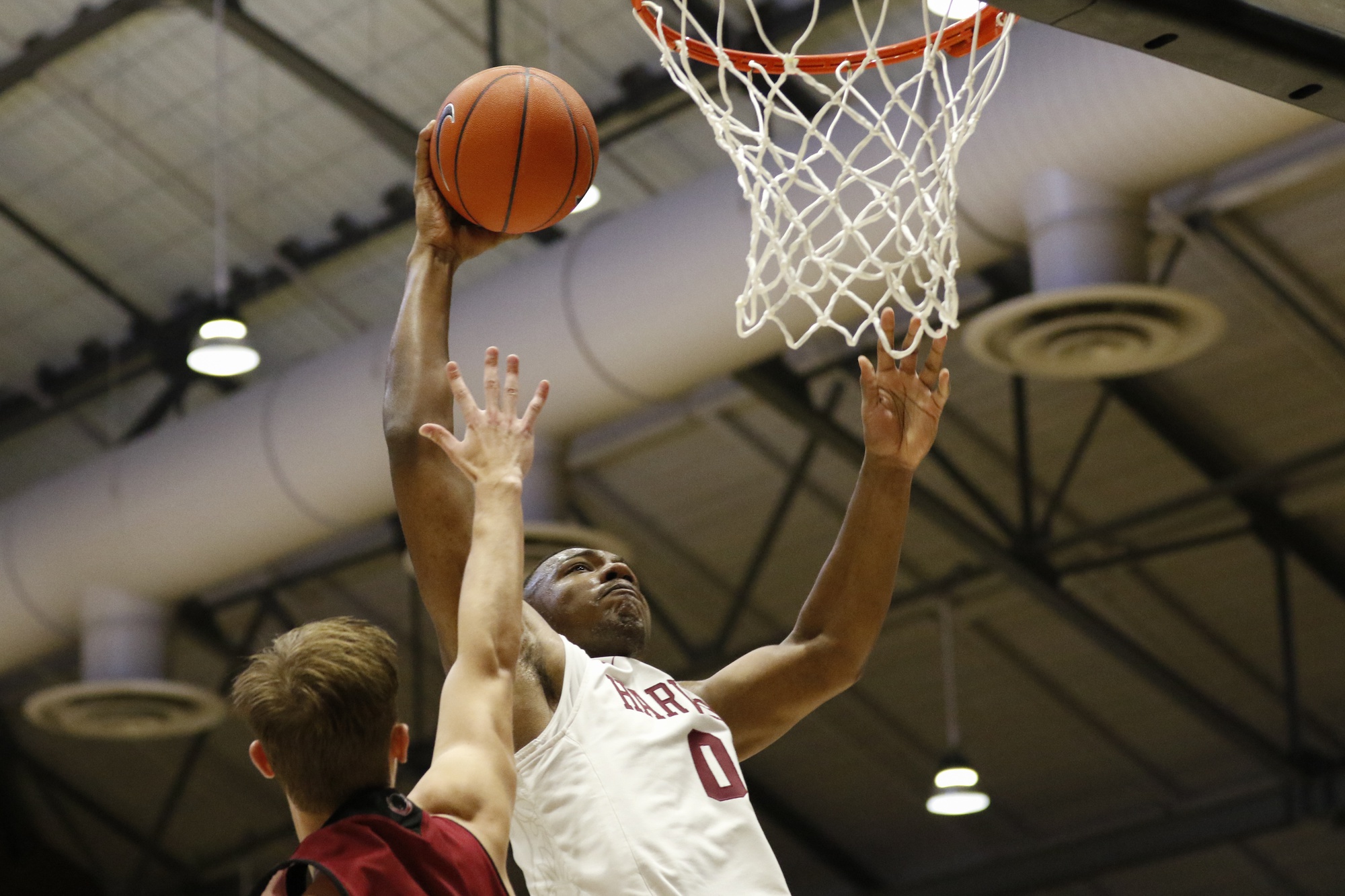 Junior big Chris Lewis put up 20 points in 15 minutes on the court. By Timothy R. O'Meara

This rust was quickly shaken off, as Lewis silenced the jeers of the MIT student section by hitting a similar layup. The Engineers responded with an airballed three as the clock expired, eliciting similar noise from Harvard’s side of the arena.

MIT students traveled down the Charles in full force, taking up an entire section of the bleachers. The two-mile trek from Kendall to Harvard along the Red Line was not enough to keep the Engineers from Lavietes.

On the Crimson side of the arena, the Harvard crowd included former University President Drew Faust, and her successor, Lawrence S. Bacow. Amaker had high praise for the two leaders.

“I've loved how [Faust] talks about how diverse our community has become around our basketball games, and you can just look and see diversity not only in terms of race, but also with students, deans, faculty, professors,” Amaker said. “It's just a whole host of people, the Cambridge community and not just Harvard folks, but Cambridge and Boston.” 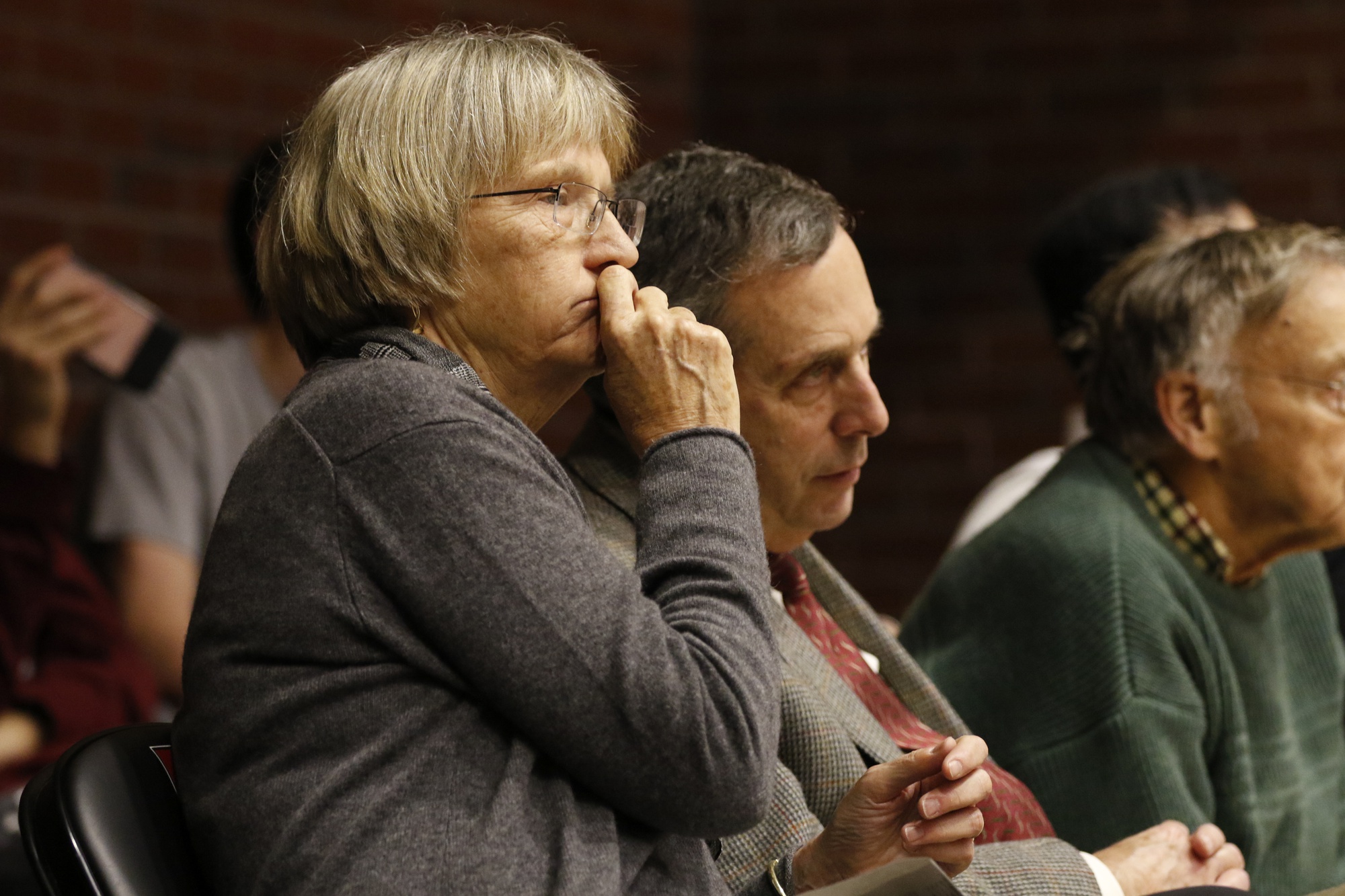 Lewis would score again on the Crimson’s next trip down the court, putting him in the double-digits in scoring. Lewis, again blanketed by multiple defenders in the paint, muscled his way to the rim and knocked down another layup, scoring for a third straight possession. When he beat MIT on another consecutive trip down the court, the Engineers resorted to a foul to keep Lewis from gaining another basket. The junior swished both of his free-throws from the line, giving him eight points on four straight Harvard possessions.

“Certainly with the foul trouble, sitting as long as he did, he was fresh for sure,” Amaker said of Lewis. “I thought he really wanted to make a difference, and we wanted to play through him... Chris really responded for us in the second half and really gave us the confidence as we opened the second half.”

With 16:08 left in the half, Lewis, who had at this point accounted for all of Harvard’s second-half scoring, finally received a well-earned break on the bench just before the first media timeout of the second half.

Despite the forward’s exit, the Crimson offense continued its momentum. Consecutive baskets from sophomore forward Danilo Djuricic, sophomore guard Rio Haskett, and junior forward Harry Welsh,extending Harvard’s lead to 13 points. MIT responded with a three-pointer, but Bassey negated the score with a triple of his own.

Lewis commanded the beginning of the game offensively in the same fashion as the early second half. The first bucket of the game also came from Lewis, this one a layup 1:10 into the contest.

Lewis completed his second layup heavily guarded three minutes in, blanketed by defenders in the paint. This was the story for Lewis while he was on the floor early in the game. The Engineers quickly double-teamed him in an attempt to swallow up the 6’9”, 235 pound forward. Lewis proved he would need even more attention, scoring again and following up with a block on the defensive end of the court. Lewis accounted for six of Harvard’s first eight points before exiting the game due to foul trouble.

The Crimson cycled a new group of five onto the floor following the first media timeout, including freshman guards Noah Kirkwood and Spencer Freedman. Kirkwood, playing in the first minutes of his college career, took the ball at the top of the key and stepped back off the dribble to knock down a contested three for his first career points. Kirkwood would finish the game with 13 points off the bench, good for second most on the team, while Freedman knocked down two threes in the game to finish with six points.

“I know it's tough coming in as a freshman [in the] first game. We've all been there, but those guys did an amazing job,” Bassey said. “...it kind of reflected in the minutes that they played tonight.”

Despite having multiple sets of five to enter the game early on, Harvard was not operating at full strength. The Crimson played without junior standouts in guard Bryce Aiken and forward Seth Towns. The former was 2016-2017’s Ivy League Rookie of the Year, and the latter is the reigning Ivy League Player of the Year. Aiken missed the majority of last year, while Towns’ injury came in the Ivy League Championship against Penn. 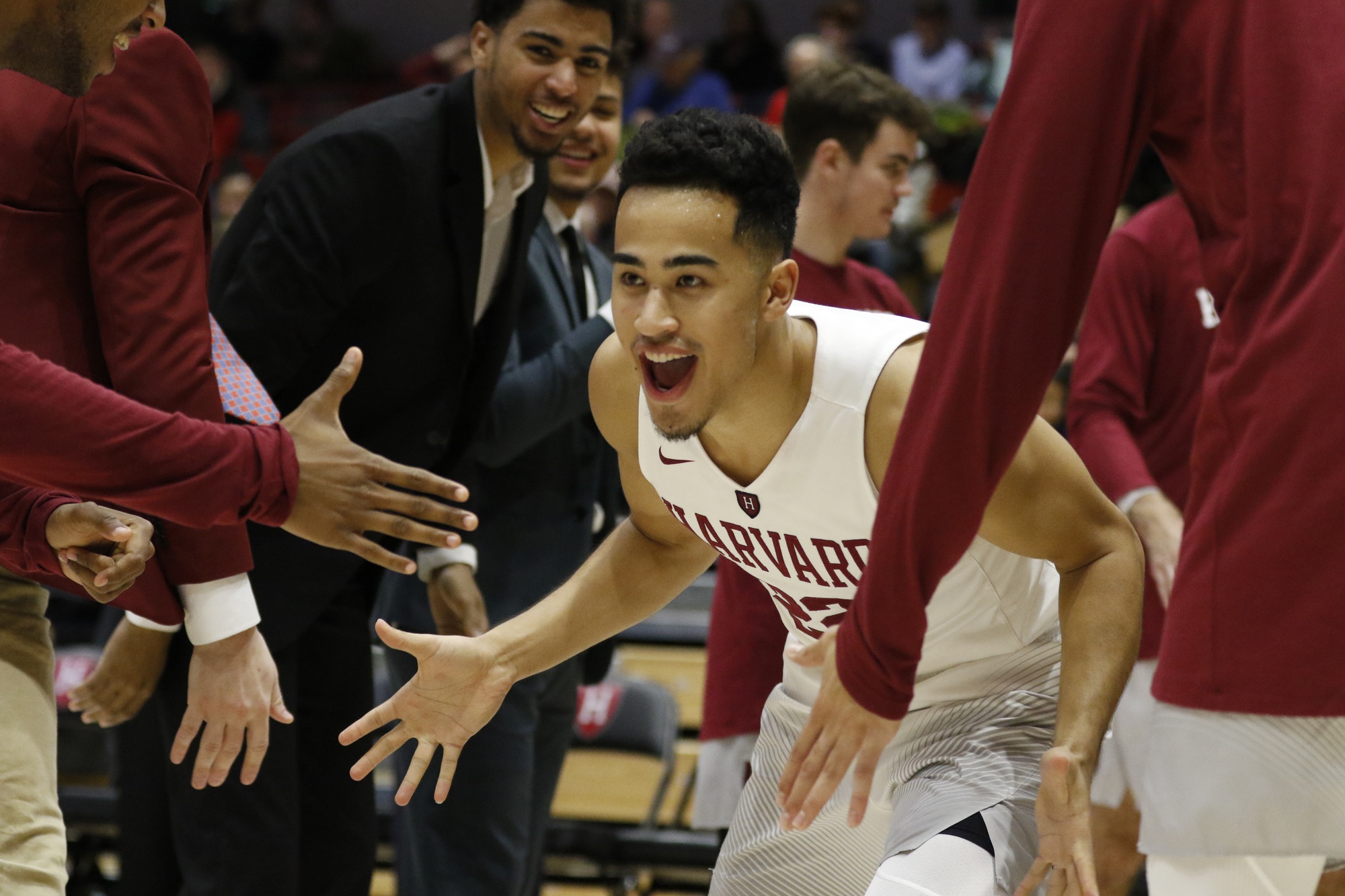 Following a media timeout, Lewis returned to the floor and quickly earned another layup in the post. The junior picked up his first foul the next trip down the floor, and another foul with 8:43 to play in the half gave MIT an extra point on a made layup and sent Lewis to the bench for the remainder of the half.

“Well, it was was my fault for getting to early fouls,” Lewis said. “But I trusted my teammates completely. I knew that my team was going to defend and put as much effort as they can.”

The old-fashioned three-point play made the score 22-20 and put the Engineers within striking distance of Harvard’s lead. Just over a minute later, the Crimson was unable to secure multiple defensive rebounds and committed a foul under the net. MIT hit both free-throws to tie the game at 22. Harvard was able to stop the bleeding with a Bassey triple from the right wing to retake the lead.

The Engineers would answer, tipping in a rebound and then knocking down a jumper to take its first lead, 26-25. Again, the Crimson would not let any runs form, with Freedman grabbing his first points of the game, and his career, on a triple. After each team traded points, MIT’s Hinkley followed up with a three-pointer that gave the Engineers another lead heading into the final media timeout of the of the half.

Following some back-and-forth play, Bassey hit a three-pointer from the corner with the shot clock winding down. A pump-fake put the MIT defender in the air and drew a foul, giving Bassey an opportunity for the rare four-point play. This time, he converted from the foul stripe.

With under a minute to go, a collision at half court sent Bassey to the bench with an injury. He would remain on the bench with staff until the end of the half.

With the score 40-39, Harvard’s last possession came up empty. A half-court shot from the Engineers rattled around the rim, sending the game into the half with the two teams separated by only a point.

With just under eight minutes to play, MIT’s offense was showing some signs of life, keeping the deficit hovering around eight points. Just before the media timeout, Lewis tore through three defenders and rose above the crowded paint to throw down a contested one-handed slam, slowing the Engineers’ momentum.

A three-pointer from MIT with 6:30 pulled the game within five points, the first time the deficit had fallen below eight in nearly ten minutes. The Engineers were unable to seize the available momentum, missing the front-end of a one-and-one after entering the bonus. With the offenses stalling and a media timeout looming, Amaker took a timeout with 4:44 left in the contest.

The Crimson struck first after the quick break, with a Djuricic layup giving Harvard back its double-digit lead, but the offenses stalled again, with no points being scored for the next two minutes.

With under two minutes to play, a hard-working Djuricic scrambled through multiple MIT rebounders to grab an offensive board and buy the Crimson a new shot clock, effectively sealing the game for Harvard.