The freshman will compete for a final roster spot in junior hockey's most important international tournament, hosted this year in Vancouver and Victoria, B.C.
By Spencer R. Morris 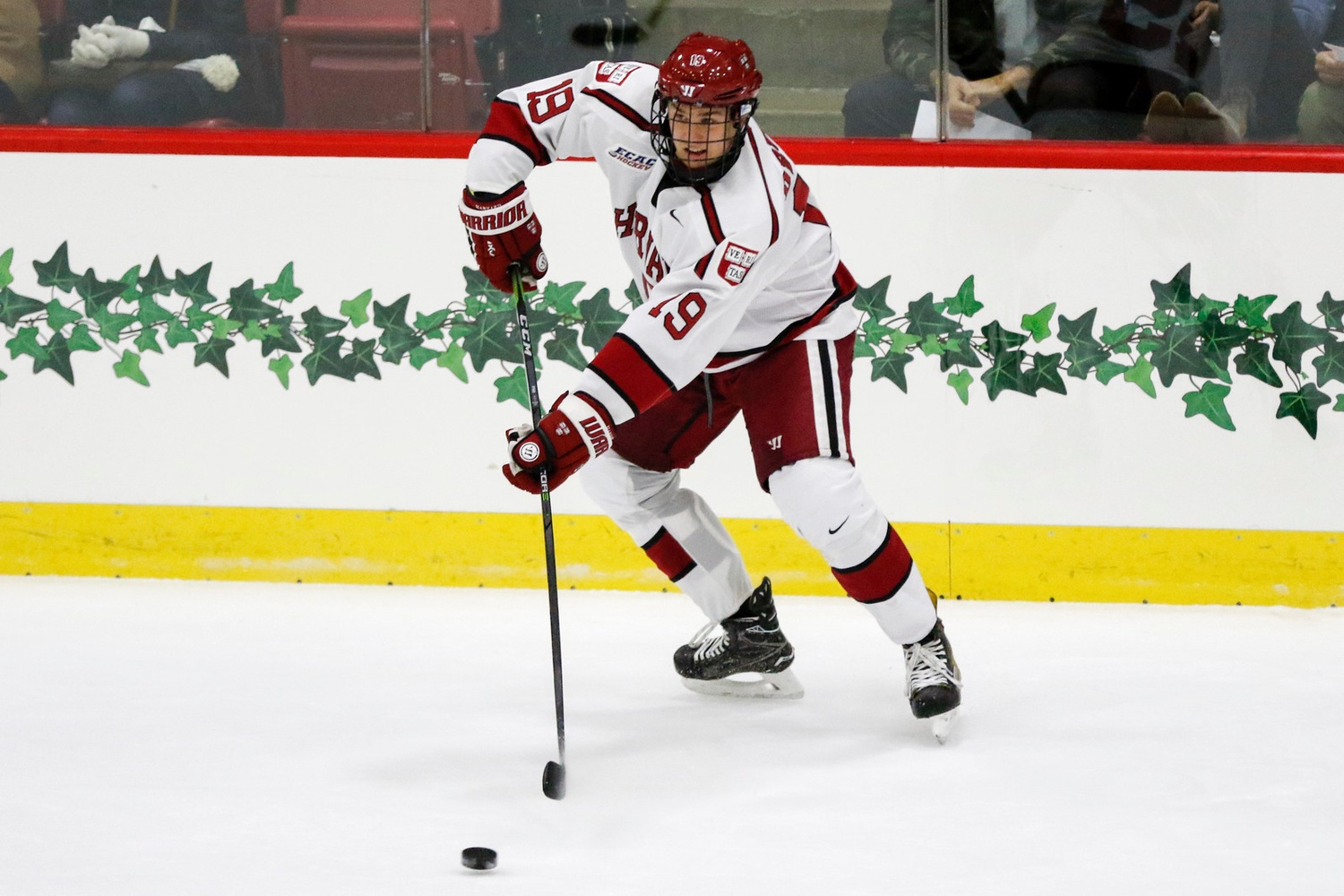 Crimson freshman Jack Drury has earned a spot at team USA's World Junior Championship camp, where he will vie for a final tournament roster spot. By Timothy R. O'Meara

“[I found out by] phone call a few days ago,” Drury said. “Initially, I was just really happy. Any time you get the opportunity to represent your country, it’s something special and definitely something that I’m looking forward [to] and hoping I can do.”

Drury, a center for the Crimson, will need to beat out several of the 16 forward invites to secure a chance to represent the stars and stripes this winter. The Winnetka, Ill., native will attempt to do so at the team’s camp, which lasts from Dec. 15 to Dec. 20 and splits time between Everett, Wash., and Kamloops, B.C.

A Harvard skater has donned the red, white, and blue in the past three World Junior Championships. Former standout Ryan Donato skated to a bronze medal in 2016; current junior Adam Fox earned gold in 2017 and bronze in 2018 as an alternate captain on the blue line for team USA. Drury hopes to continue his collegiate program’s recent streak of WJC performers.

“Growing up, I woke up early for some of the games to watch,” Fox recalled. “You never really thought of being a part of [the World Junior Championship], but when I got that opportunity, it was unbelievable. Being in Montréal my first year, playing in front of that huge crowd for the gold medal, it was definitely special. And being able to wear a letter, too, it was obviously a huge honor.”

The World Junior Championship is the grandest stage for junior hockey players worldwide. In the past three years, numerous alumni of the USA team have graduated to stardom in the National Hockey League, including Auston Matthews, Jack Eichel, and Zach Werenski.

This year’s American squad, featuring seven NHL first-round draft choices and the presumed No. 1 pick in the 2019 draft, Jack Hughes, promises to contend for gold. Drury is well aware of the unique opportunity in front of him.

“For any hockey player, it’s a tournament you’ve been watching since you were a little kid,” Drury said. “I can remember watching 2010 when [team USA] won the gold, and 2013 and 2017. It’s a really exciting tournament, and within the hockey world it’s one that people love so much that it certainly makes it a special experience.”

In this year’s iteration of the tournament, the United States will play in Group B along with Slovakia, Kazakhstan, Sweden, and Finland. In 2018, the Swedes knocked off team USA in the semifinals before falling to Canada in the championship game.

Drury hopes to ride his success through 11 NCAA games this season (4–8—12), in which he has pivoted the Crimson’s most effective forward trio, to a prominent role in the 2019 tournament roster as it looks to medal for a fourth consecutive year. The forward ranks third in the nation in points per game (1.09) among freshmen and thus far has answered any outside concerns about a young attacking unit replacing lost scoring from last season.

“He brings a lot of smarts down the middle,” Fox said of his rookie teammate. “He’s been productive for us, even though he’s a freshman. He has a good impact on the game, just emotionally and with his energy. He’s definitely good for us.”

For now, Jack Drury is one step closer to being a part of the Americans’ quest for gold on junior hockey’s premier international stage.