Men's Hockey Knocked Back Down to .500 by Union 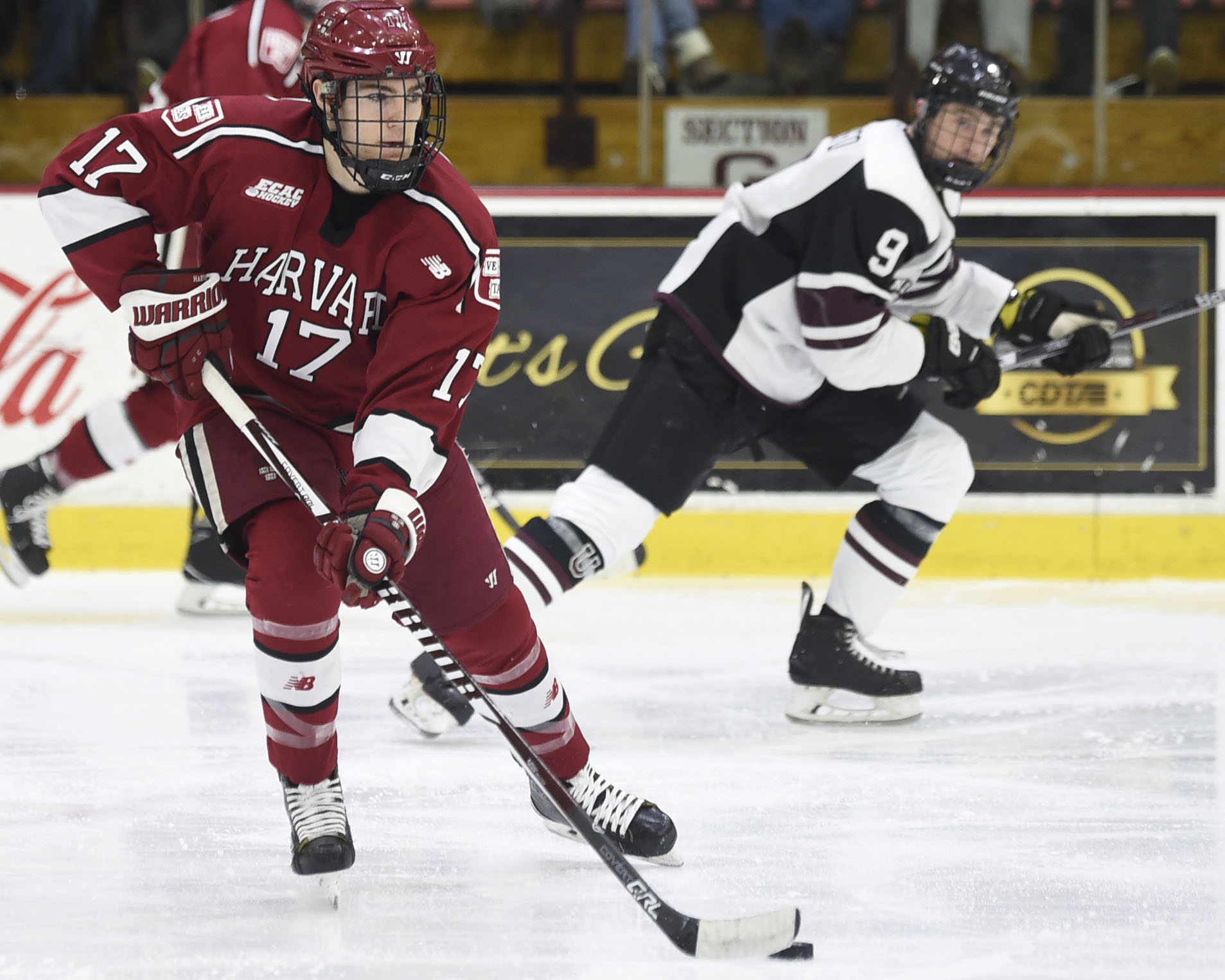 Sophomore forward Ty Pelton-Byce was the Crimson's sole goal-scorer in Friday's bout with the Dutchmen. The Madison, Wisc., native will have big shoes to fill moving forward, as he has slotted up to fill Ryan Donato's usual top-line center role. By Courtesy of Peter R. Barber/Daily Gazette
By Stuti R. Telidevara, Crimson Staff Writer

Down in the third period, the Harvard men’s hockey team turned up the heat at Union. But despite the Crimson’s efforts—and the play of junior net-minder Michael Lackey, who kept the Dutchmen at bay—the comeback attempt fell short on Friday night.

The Dutchmen (17-13-1, 12-5-0 ECAC) held off Harvard (10-10-4, 9-6-3) for a 3-1 win, handing the Crimson its fourth loss in five games and sending the team back to .500. As it has in all four of those recent losses, Harvard faced a hot goalie. This time, the masked culprit was reigning ECAC goaltender of the week, junior Jake Kupsky, whose performance (30 SV, .968 SV%) resulted in the Crimson struggling to find an offensive footing for the first two periods of the game.

“We had spurts of good hockey,” said Harvard coach Ted Donato ’91. “But across the board, [with] all 20 players, I don’t think the commitment level was at the necessary level to win at a tough place like Union.”

With top-line forward Ryan Donato gone for the Winter Olympics, the lines were shuffled in advance of Friday’s matchup. Sophomore forward Ty Pelton-Byce, who has spent the season to this point on the left wing, slotted in at center in Donato’s place. Rookie forward Henry Bowlby, recently back in the fold after dealing with an illness, moved back up to the first line after.

Meanwhile, freshman Ben Solin, who opened the scoring against Dartmouth last weekend, regained a spot among the top 12 forwards after watching last Monday’s Beanpot semifinal loss from the press box. Prior to sitting against Boston University, Solin had found some nice chemistry on the third line alongside tri-captain Jake Horton and junior Michael Floodstrand. Despite all the line shuffling in Donato’s absence, that trio was preserved as Friday night’s second line.

“I think it’s our work ethic,” said Solin last Friday, when asked about his line’s performance of late. “Horton is great at finishing every check, finishing every forecheck. Same with Floody. He’s got some pretty good hands, some pretty good vision. So, I think [we] three work really well together, especially when we’re working hard in the corners.”

“We’ve got to play as a team,” stressed coach Donato when asked how the team could find success without its star forward. “[The Dutchmen] make you compete.... There was a lot of loose pucks there that we wouldn’t get.” 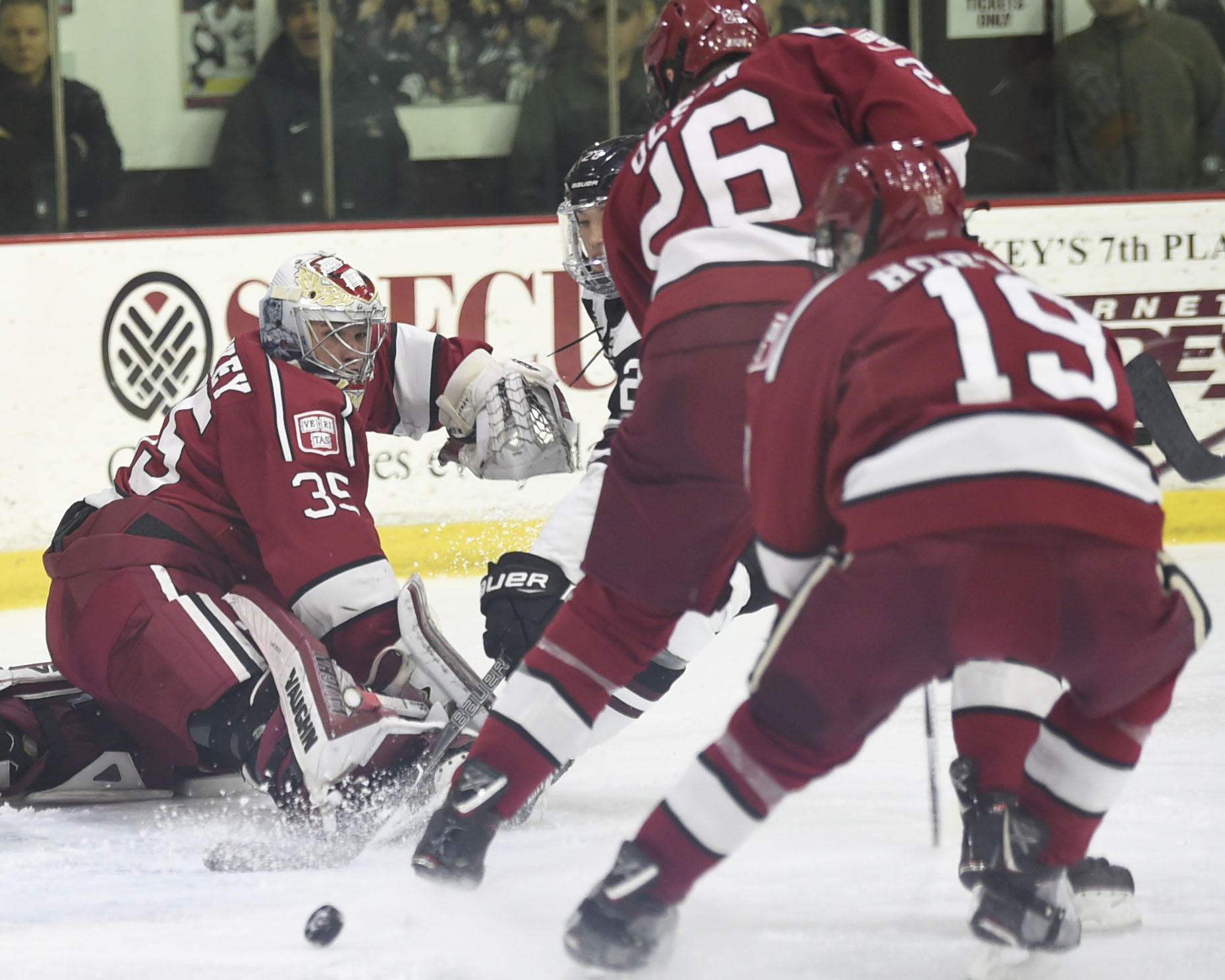 For the seventh time in its last eight games, Harvard did not strike first. Instead, the visitors trailed just 7:40 into the first period after a shot by Union freshman Liam Morgan found its way through traffic—and past Lackey.

Seven minutes later, however, the Crimson retaliated. Kupsky played the puck right onto the stick of Pelton-Byce, who carried it into the slot. Though his stick was lifted on his first shot attempt, Pelton-Byce beat a screened Kupsky with the second try for his second goal in as many games. The teams left the ice for the first intermission tied, 1-1.

“In the first, we were pretty good,” coach Donato said. “But the second period, especially the first ten minutes...we lost all the races to pucks.”

While the Dutchmen didn’t score in those first ten minutes, coach Donato’s team was outchanced despite spending time on the favorable end of a 5-on-4. Harvard has not scored on 16 straight power plays now, a marker of the team’s offensive struggles.

Lackey was forced to be his best in the middle frame, when the Crimson lost the shot battle, 14-8, and made several diving saves. But late in the period, Union found the net again.

With a screened shot very similar to his first goal, Morgan tallied another to break the tie. Barely a minute later, Harvard junior defenseman Jacob Olson was whistled for elbowing, putting the Dutchmen on the man advantage. On the power play, junior forward Ryan Walker swept the puck around Lackey and into the net, widening the home team’s lead.

The final period was the Crimson’s best, as the team outshot Union, 14-5, but Kupsky wouldn’t cave in net and denied all the attempts he faced.

“I don’t put a lot of emphasis on chasing a game and getting some shots in the third,” coach Donato said. “I’d rather have the 3-1 lead and be defending.”

Harvard’s fourth-place position in the ECAC standings remains unchanged by this result, but the gap between it and Union, in third place, widens to three points. The top four conference teams get an automatic ECAC bid and home ice during the tournament, so the two points would have served as a crucial buffer between the Crimson and the eager teams below it.

“At this point in the year...it was our biggest game of the year for us,” coach Donato said. “That’s what’s on the table moving forward for us in all our league games. This game had our full attention.”

For now, Harvard must turn that attention to its Beanpot consolation game against BC on Monday. But the conference play kicks back into gear next weekend, with a homestand against St. Lawrence and Clarkson.