Twenty-one years after the first woman assumed the UC presidency, many current representatives say the UC continues to grapple with issues of gender equality.
By Paula M. Barberi and Jonah S. Berger 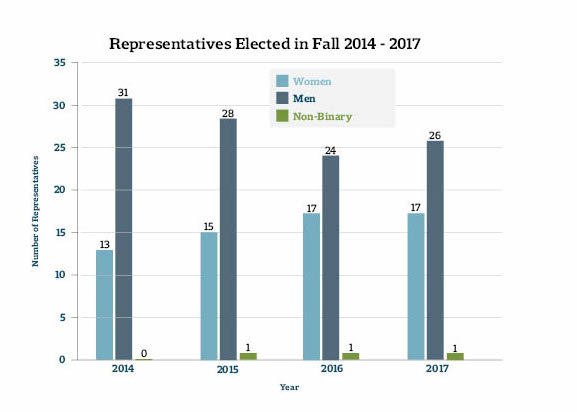 Twenty-one years after the first woman assumed the presidency of the Undergraduate Council, many current representatives say the UC continues to grapple with issues of gender equality and inclusivity.

But some representatives said the Council must continue to focus on issues it has long failed to address.

“Whenever a woman comes to the front of the room... it's almost like ‘unqualified until proven qualified’ instead of the other way around,” Crimson Yard representative Sonya Kalara ’21 said.

In an emailed statement, UC President Catherine L. Zhang ’19 wrote she is committed to ensuring all members of the Council are given an equal voice.

“[Council Vice President] Nick [Boucher] and I are both extremely dedicated to making sure the UC is upholding our community norms of respect, inclusion, diversity, among many others, and a huge part of that is ensuring that all of our female representatives feel as if this council is just as much theirs as anyone else,” Zhang wrote.

Zhang particularly cited the increased representation of women in UC leadership roles and the recent midterm elections as evidence these efforts have begun to bear fruit. For three consecutive years, women have stood at the helm of the UC.

Nonetheless, multiple female Council members say female representation at the top has papered over the structural barriers that non-male members continue to face in attaining leadership roles and feeling comfortable speaking up at Council meetings.

Not 'In With The Boys'

When the Undergraduate Council was officially established in 1982, Harvard College was still disproportionately male. While the College had instituted sex-blind admissions in 1977—when the ratio of men to women at the College stood at four to one—the process of moving the needle on female representation at Harvard was slow. As late as 1988, males still outnumbered females roughly 60 percent to 40 percent, and not until 2004 did the College achieve gender parity.

The first years of the Council were dominated by male leadership. In fact, at least its first 12 chairmen—a position replaced by the presidency in 1996—were male.

While the Council was by no means conservative on gender issues—voting to urge administrators to hire more female faculty members in 1988 and condemning all-male final clubs in 1989, among other examples—the lingering effects of a largely male-controlled body continue to affect the UC, according to some current Council members.

“For a long time, the leadership has primarily been male,” Pforzheimer House representative Rainbow Yeung ’19, an inactive Crimson blog editor, said. “And there’s some sort of established role, some unintentional biases that may have been passed on to today.”

Still, there have been internal efforts to increase female representation on the UC. In 2010, the Council passed legislation increasing outreach to prospective female candidates. The Council almost reached gender parity among declared candidates and elected representatives in 2013; but in 2014, only one in three members of the UC were female.

Female representatives cited the informal process of grooming leadership—in which a committee chair chooses a younger member to mentor and eventually take over as chair—as particularly difficult to overcome.

Sruthi Palaniappan ’20, who served as the only female committee chair out of seven total chairs last semester, said she had to “navigate” the grooming process in order to gain her position as education committee chair.

“The committee chair oftentimes will have certain people in mind that they are trying to groom for this position, that they're supporting on a more individual basis, and providing structural support,” Palaniappan said. “That same support is not equally provided to a female member within that committee.”

Kalara echoed these concerns, saying the selective nature of the “grooming” process can hinder women’s ability to move up within the Council.

“If you are a woman who is participating in a committee but you feel like you will never make leadership because you're not ‘in with the boys,’ it can be very exclusionary,” Kalara said.

Robertson pointed to quotes in articles written in The Crimson as a sign of the gender disparity on the Council.

“We looked at every single one of the [UC] Gen[eral meeting] articles that came out in the entire calendar year,” Robertson said. “79 percent of the articles quoted more men than women.”

Several representatives pointed to a UC meeting held Oct. 15 as a defining moment in the Council’s efforts to combat gender imbalances.

The meeting came a few weeks after U.S. Secretary of Education Betsy DeVos implemented a policy raising the standard of proof in sexual assault cases. The new policy, which replaced an Obama-era guideline making it easier for schools to punish accused abusers, met with resistance from many UC representatives.

Two female Council members, Julia M. Huesa ’20 and Abdelrahman, decided to present a resolution condemning DeVos’s policy change and calling on College administrators to maintain the lower burden of proof they had instituted in 2014.

Yet the resolution faced opposition from several male representatives and sparked controversy during the meeting. Multiple UC representatives then called for a roll-call vote—in place of a typical hand or voice vote—in order to identify exactly who opposed the legislation.

“It was a breaking point,” Student Relations Committee Chair Nicholas P. Whittaker ’19 said. “For the first time, vocally, identities came into play on the Council.”

In an email to UC members after the meeting, former UC Vice President Cameron K. Khansarinia ’18 urged representatives to consider the perspectives of their fellow Council members.

“We cannot assume others’ intentions when we work together in this Council and cannot boil down our votes to our identities,” Khansarinia wrote in the email. “This has now been said a few times by a few different people and I think it's time to close the book.”

Multiple representatives—including Zhang—declined to speak about the October meeting, citing fear that it could reignite divisions of the past semester.

Amid tensions and continued unequal representation on the Council, female representatives said they have relied on each other for support, both informally and through more structured channels such as the Council’s Women’s Caucus.

“We met up one evening in Catherine Zhang's room and just talked,” Ivy Yard representative Swathi R. Srinivasan ’21 said. “And we realized that a lot of these experiences were shared and I think that was the first thing to building a community and a shared voice.”

Though female Council members said there is still room for improvement, many said they were encouraged by changes they have seen since Zhang assumed the UC presidency in December.

“I definitely sensed an active effort by members of the Council in order to encourage more female leadership,” Palaniappan said. “Whoever is in leadership has the ability to set the tone of the Council and to really create an environment that respects and values every member within it.”

UC Treasurer Nadine M. Khoury ’20 said she personally worked to level the playing field and provide an avenue for women and other underrepresented minorities to ascend the ranks of Council leadership.

“I think now as treasurer, one of my biggest goals is to make the financial realm of the Undergraduate Council so much more acceptable to women and to take a lot of people under my wing and make them feel like there's no barrier to entry,” Khoury said. “Even if it seems like legislation on the Finance Committee has a lot of jargon, even if it seems kind of distant and esoteric, I want to break down that barrier.”

In addition, seven of the ten winning candidates in this month’s midterm election were female.

Whittaker also said they feel the Council has begun to make progress on gender-related issues.

“We're talking about stuff on the Council we've never talked about before,” Whittaker said. “So while I know a lot of people are kind of frustrated by the anger that seems to be on the Council, frustrated by the vitriol by these kind of scenarios, I think they're quite a good thing because I think it means we're addressing things that weren't addressed before.”