80 Years of Music: An Interview with Joan Tower, Trailblazing Composer 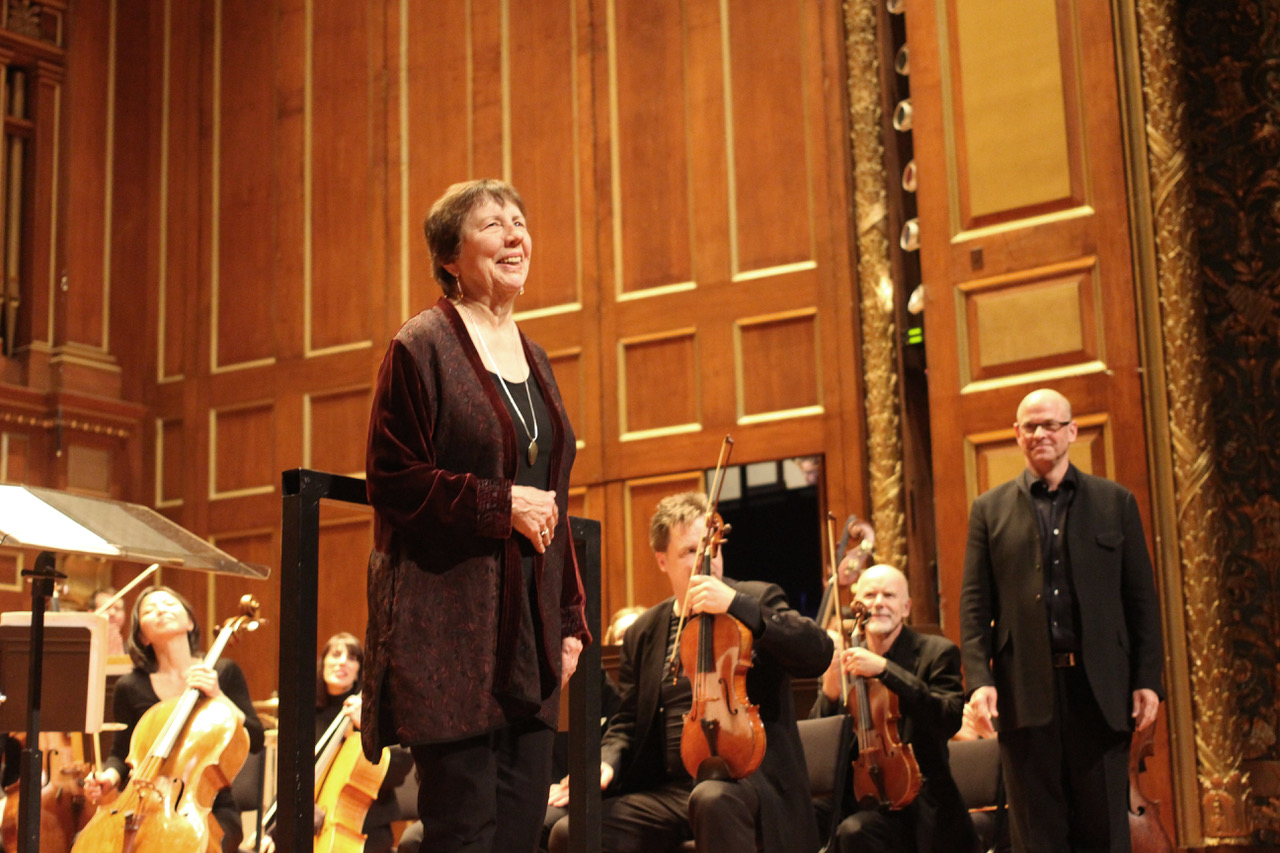 By Courtesy of Robert Kirzinger
By Faith A. Pak, Crimson Staff Writer

Joan Tower is a Grammy-award winning contemporary classical composer and one of the most successful woman composers of all time. This year she turns 80 years old, and to celebrate her incredible lifetime achievements, the New England Conservatory will be featuring her music in a series of concerts this February. In this interview, Tower speaks candidly and humorously about life, composing, and the classical music world.

THC: What’s your composing process like? What inspires you?

JT: Coffee and lots of sleep. “Inspire” is a kind of weird, complex word. What inspires you… hm. It’s more than an idea, it’s a whole confluence of: “Did you get a good night’s sleep? Is your life going ok?” All that always plays a role. Sometimes a player you really love and admire asks you to write a piece—that’s really inspiring. But once you start writing a piece it’s the piece that has to inspire you.

JT: For me, it’s torture! For some people it’s a piece of cake. I’m one of the tortured composers. I write very slowly, and I really get into it as deeply as I can, because I want to be as close to the piece as possible to see if I can create a strong narrative and an interesting set of profiles. The work commitment is large. It’s gotten easier since I was 18. I don’t run away as much. “Oh, I just have to change the sheets! I just have to make this phone call. I really have to dust this place, right this very minute!” I do that now a lot less.

THC: How did you start composing?

JT: By accident. A lot of things in music, or I guess in life, happens by accident or coincidence. When you ask a clarinetist, for example, they often say “How did you choose to play the clarinet?” “Oh it was handed to me at band practice when I was 8 years old because they didn’t have enough clarinets in the band.”

I went to Bennington College, which was a really wonderful place for me because it allowed me to open up and do what I needed to do with music. The first assignment was to write a piece. I was a pianist. I had never written a piece before. So I said, “Oh my God.” So I wrote a piece and it was played, and it was horrible, really horrible. So I thought to myself, “Well, you could do better than that.” So I wrote another piece, and it was still really horrible. And I’ve just been trying to fix it ever since.

It was another way into music and that was fascinating to me. When you’re a performer it’s one way, when you’re a composer it’s another way. I kept the two activities going for a long time and it gave me a lot of insights into music I never had before. Are you a musician?

THC: I play viola. It was also sort of handed to me. I started on violin because my mom wanted me to. I had this really intense violin teacher who said, “You don't practice enough! Switch to viola!” So I did, and I loved it so much more!

JT: Oh that’s great. I love that instrument. I love it.

THC: The first time I actually heard your music was when my friend who played your piece, “Wild Purple,” in a studio class.

JT: That’s a hard piece! That’s the hardest of my viola pieces. It changed my relationship to violists and the viola.

THC: Do you play the viola?

JT: No. I took it up once, bought a cheap viola, got to first position non vibrato.

A person, a very good violist, Paul Neubauer, he just kept after me. The first piece I wrote was “Wild Purple.” Well, that needs a companion piece so I said ok, so I wrote another one, simply “Purple Well.” Now I need a third one for sonata form. So I said’ “Well come on Paul!” So I wrote a third piece called “Purple Rush.” That was played in Lincoln Center last year. The fourth piece was a concerto for viola and orchestra. He put together eight orchestras and played with all of them and recorded it.

JT: What I’ve discovered is when I go to orchestras the violists come up to me and ask me for my autograph. I was shocked by that, because the violinists don’t do that, ever. So now I’ve become president for the Society of Prevention of Cruelty to Violists! Do you know any good viola jokes? I need a good one.

THC: What’s the difference between an onion and a viola? Nobody cries when you cut up a viola.

THC: What was it like being a trailblazing woman composer?

JT: That’s a very important question to me—some women composers don’t want to deal with that question at all. I do, actually. I’ve created women’s festivals, and I’m in touch with a lot of women composers. I think you have to know that the history is very bad. Once you know that you’re a little more knowledgeable about your role in this history. You have a historical context. I think it still is an issue. If you look at the orchestral programming there’s not a whole lot of women often or in the repertoire. So the question is not something that can just be solved. Some people say, “Oh, that’s not a problem anymore.”

Then you have to put it in the context of the living composer. The living composer is not treated so well anywhere—in the classical music word, that is. So the question is, we have to make some headway in solving this imbalance. The imbalance in the classical music world is definitely dead vs. living. Somebody said to me yesterday that this one orchestra was only doing one woman composer this year or last year. And I asked him why, and he said, “Oh, they’re not interested in choosing by gender.” And I asked how many living composers that whole year [were women] and he said five out of 73 or something like that. We’re not anywhere near a normal situation here!

JT: I’ve been studying this for 60 years. I think music is very abstract and it has created a kind of a fixed body. The structure of teaching music has gone into conservatory, university and it has changed slightly. The composer only came into the university in the 1960s really. That’s pretty late. They came in under the umbrella of scholarly work. That meant that they had to do theory, write articles on theory, become scholars to become a member of this faculty fraternity. You start to get a lot of smart intellectual composers in the university who can write articles and analyze and things like that.

That’s changed somewhat. It's not such a requirement now to be a scholar to get a university position. In a conservatory, which is heavily dominated by performers, usually the composition side of conservatory is a very small part of it. Performers are dominating that scene, and mostly teachers are interested in creating specialists who play dead composer music. So that kind of started in the early part of the 20th century, a split between composers and performers. In the 19th century a lot of the composers were performers, so they were out front in front of the audience. And the musicologists and books were talking about dead composers, not living, because there had to be some kind of historical context. So when I went to Columbia for fourteen years to get a doctorate, because I wasn’t that interested in it, there were no women in the books. There were like one or two maybe in these heavy colossal books. So in all history of women in music, [women] were kept down for so long. Women were not allowed to do music unless they were in the convent. It’s a pretty pitiful history. It’s changing, though.

It’s gotten so specialized now. It’s narrowed down a lot. So we have a requirement here in Bard that all the performers have to take my class, “Composition for Performers.” Some of them come in kicking and screaming. Some write some very interesting music and play other people’s music. It opens a door to the question of “What is this page—how did it get there?” So that’s an incredibly important part of music education here. They do it at Yale. But they don’t do it in a lot of places. If you’re gonna be a musician you should get around it in different ways, conduct, improvise, compose… not just learn how to play your one instrument.

THC: What do you think about the state of classical music today?

JT: That’s a tough one. I’ve always felt—and this is a maverick idea—that the pop world is a whole lot better off because the performer and composer are often the same person. So you see Bob Dylan, Bruce Springsteen—you see them in front of you, who happened to create this particular song—not always, sometimes. I think that’s healthy.

Another thing is, mostly you’re dealing with songs and you can start at the age of two, and you can start expressing your feelings through words and sound. Either through rap or through a tune or rhythm, and that creates a different earlier path for untrained people—you know garage bands in the basement. They can go down there and have a lot of fun after school. That’s a very different kind of context for them. Another thing is, people have opinions about it. If you’re a rock person or pop person you’ll have opinions about this singer versus that singer, that guitarist is too loud, that soundtrack is whatever, because you have inside experience with it yourself.

With classical music, a lot of the audience is kind of far away from it, unless they play piano or viola or something that brings them a lot closer. Because a lot of the people in the classical music audiences don’t have that experience and they’re intimidated to have an opinion about Beethoven, for example. To have an opinion about Beethoven—excuse me?! That’s just a very subjective point of view but that’s just one of my theories about it.

—Staff writer Faith A. Pak can be reached at faith.pak@thecrimson.com.