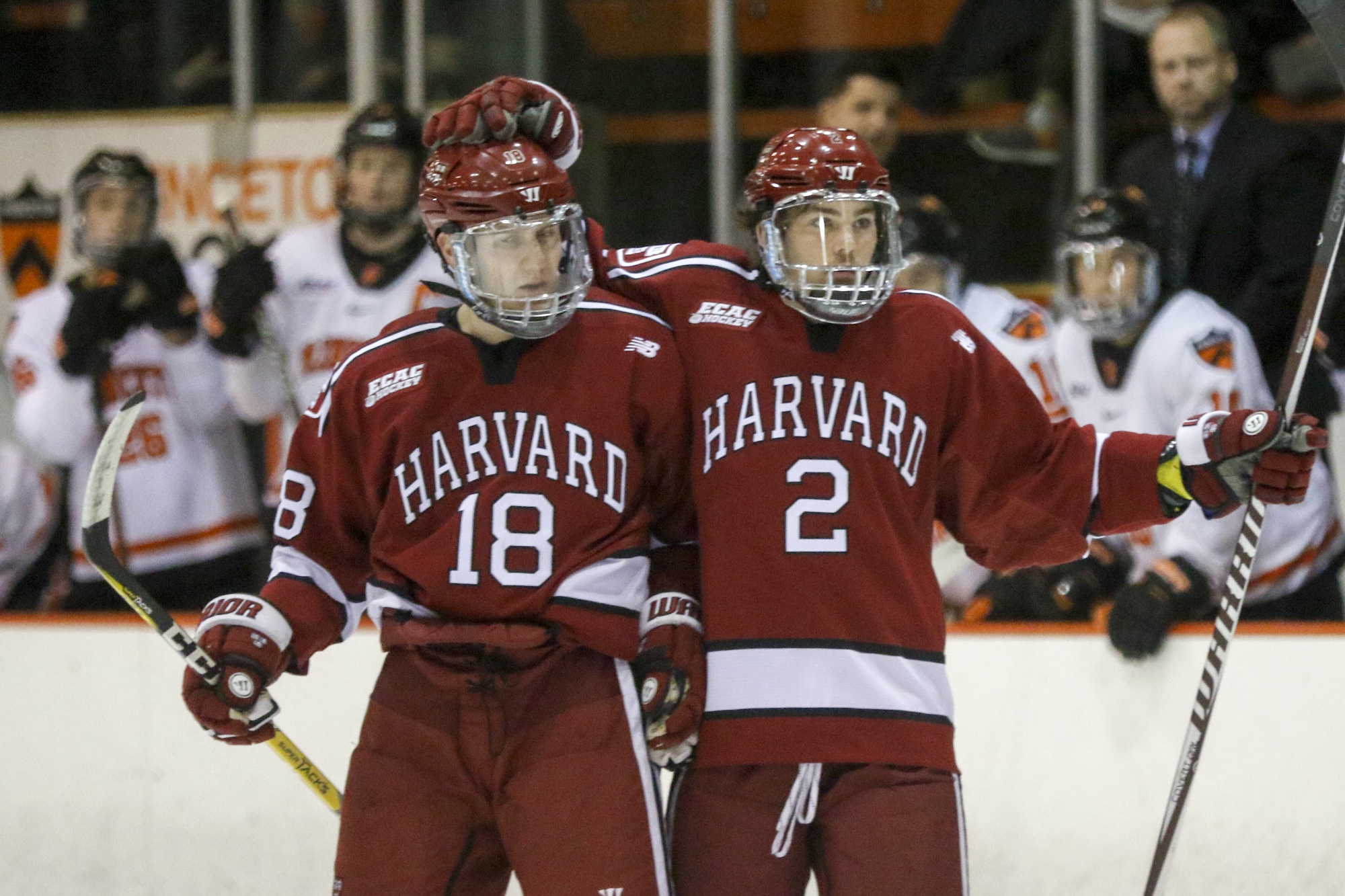 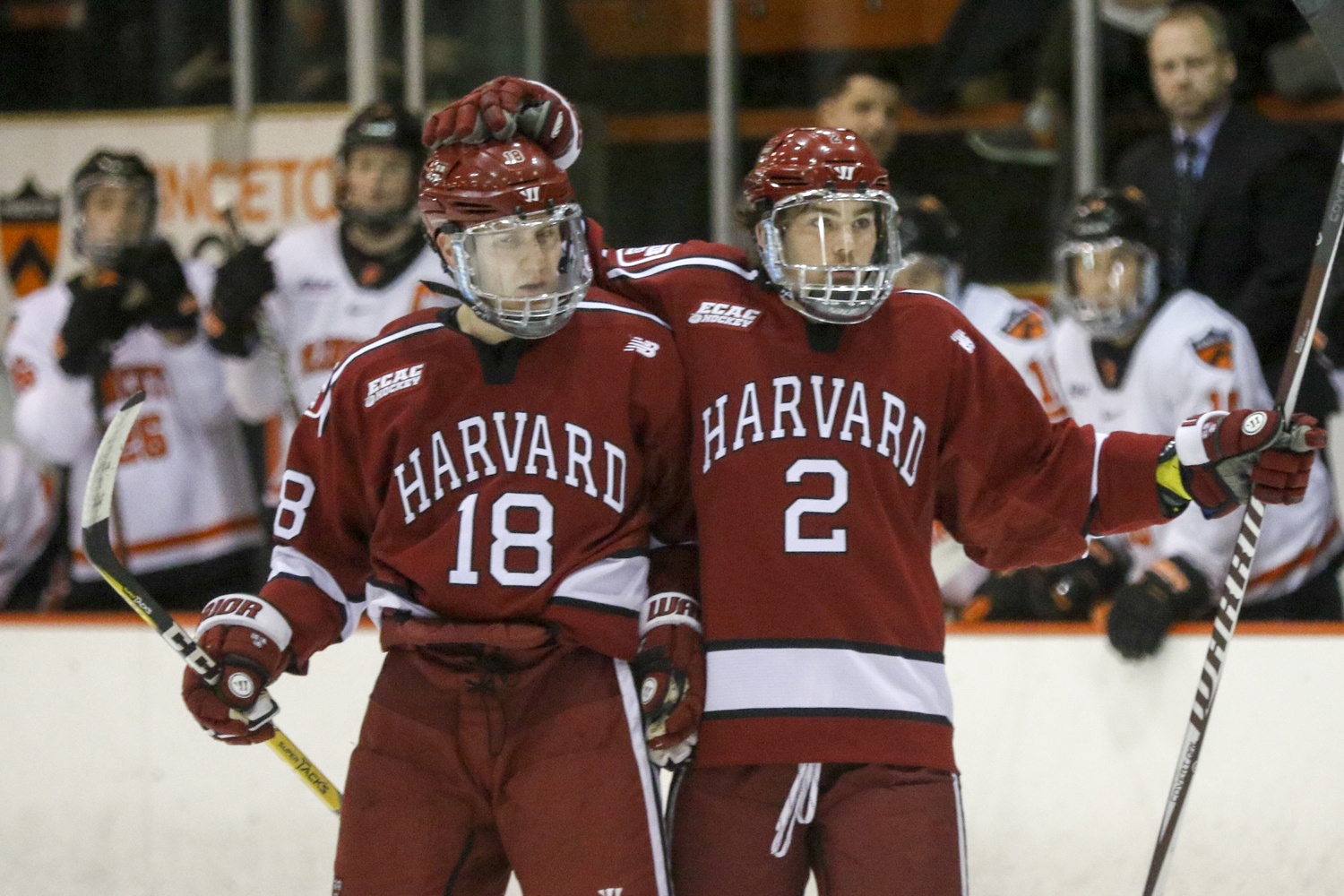 The Harvard men’s hockey team started off senior weekend with a resounding win on the back of a shutout and a hat trick. Both the shutout and the hat trick, however, came from unexpected contributors.

“I thought it was a good, solid game,” said Harvard coach Ted Donato ’91. “We stayed with it…. Both [the special teams] units gave us a great chance to have success tonight.”

A scoreless first period still contained fast, up-and-down play, with a man-advantage chance for each team. The Crimson’s first stab at the power play, which did not score on 17 straight opportunities before Monday’s Beanpot consolation match, looked disjointed. Both goalies made their presences felt, as Lackey stopped the Saints on a few partial breakaways, and visiting junior net-minder Arthur Brey stared down Harvard’s 10 opening-frame shots.

“Although we had played pretty well in the first...the game was going to be decided in the second,” coach Donato said. “We wanted to make sure that we weren’t reacting…. We [wanted] to dictate the tempo and play in their zone.”

That shift in momentum really began to show as the middle third wore on. Halfway through the second period, St. Lawrence sophomore Alex Gilmour boarded Crimson rookie Henry Bowlby from behind in Harvard’s defensive zone, drawing exclamations from the crowd and a whistle from the referee. Gilmour received a five-minute major and a game misconduct for his infraction.

As if the ensuing 5-on-4 weren’t enough to jumpstart the home team’s offense, Saints freshman Eddie Pavlini took an interference penalty, putting the Crimson up by two players for a full two minutes. Fox capitalized on this opportunity, skating into the high slot and throwing a shot through traffic that went bar-down on Brey.

Less than a minute later, Fox nabbed his second strike. The Calgary Flames prospect kept the puck in the St. Lawrence zone, firing it from the high slot again to beat Brey blocker-side. The second tally gave Fox his first career multi-goal game.

“There’s no question that [Fox] is a very gifted, talented player,” coach Donato said. “He was a little bit snakebit early on in the year…[and] just didn’t show up on the scoresheet as much as he’s used to. He’s one of the most electric offensive players in the country from the blue line.”

Harvard and the Saints continued to trade both opportunities and penalties, but after 40 minutes the Crimson held its 2-0 lead. Early in the third, Harvard went on the power play once again. And once again, it was a defenseman who beat Brey. This time, freshman Reilly Walsh was the culprit, converting on a shot from the blue-line. 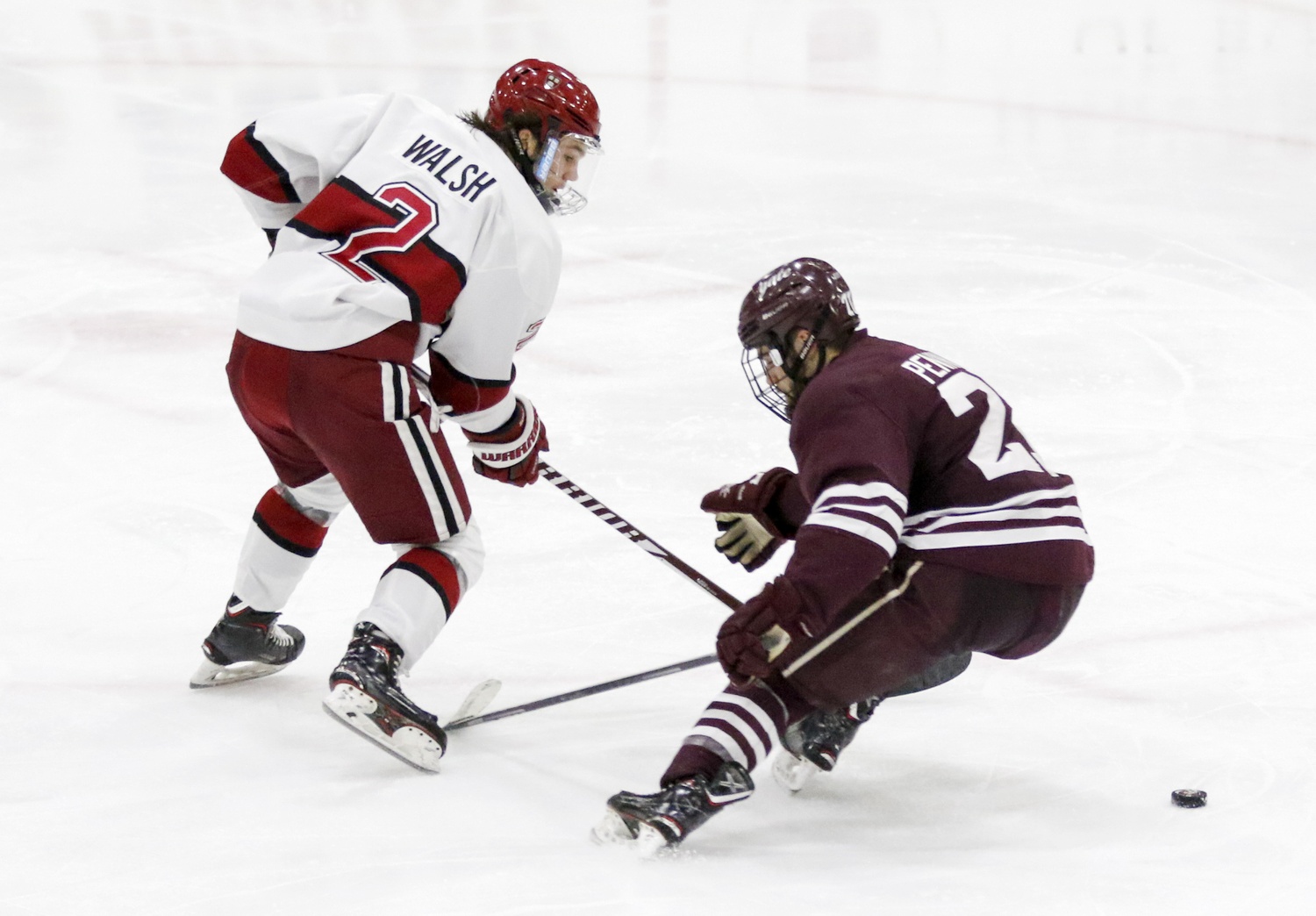 Not one to be left behind, rookie blue-liner Reilly Walsh, pictured here against Colgate, also tallied a power play goal. By Timothy R. O'Meara

The Crimson wasn’t done scoring yet, even as St. Lawrence swapped Brey between the pipes with freshman Cameron Gray. From behind the net, sophomore forward Nathan Krusko fed rookie linemate Henry Bowlby in the slot. Bowlby tried to chip one past Gray, and when that failed, he backhanded his own rebound into the net.

The tally was surely satisfying for the rookie, who was jostling with the Saints defensive corps all night for position in front of the cage.

Finally, Fox put the icing on the cake for Harvard late in the third, tapping in a cross-ice pass from senior forward Seb Lloyd. The hat trick, a career-first for Fox, also marked the first by a Crimson defenseman since Danny Biega ’13 notched three goals in Jan. 2011.

“It wasn’t on my mind too much,” Fox said dismissively. “I’ve never been much of a goal-scorer. [But] it’s nice to get a few goals.”

St. Lawrence had a power play opportunity in the last minute of the game, but Lackey shut down the visitors to preserve his shutout. Though Harvard kept the puck away from Lackey for most of the game, letting only 16 attempts get through to him, the netminder was forced to make several dramatic saves on shorthanded opportunities.

Coach Donato has been reluctant to commit to a single goalie this season, and Lackey’s solid play will make his choice all the more difficult. Whether the coaching staff sticks with Lackey after Friday’s performance or returns to tri-captain Merrick Madsen remains to be seen. 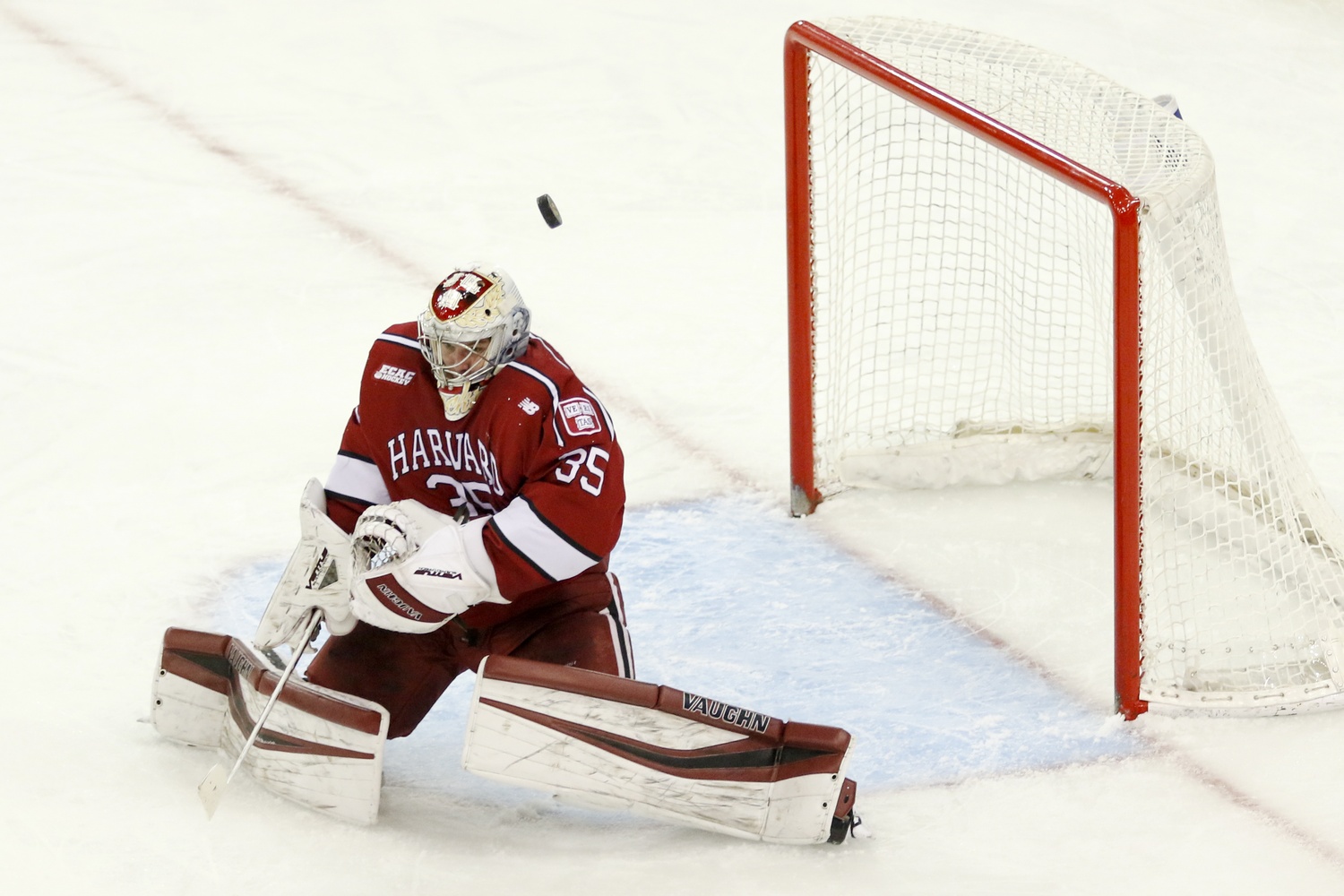 “On any given night, we want to play who we think gives us the best chance to win,” said coach Donato, reiterating the philosophy that he has preached to this point in the year. “We have faith in [Madsen] and in [Lackey]. I’m not a one-goalie guy.”

The five-goal night featured a perfect penalty kill by the Crimson and 50% efficiency on the power play—a special teams success by any measure. The squad also tossed 39 shots at the opposing net, while attempting 75. For a team that has both struggled to ink the scoresheet recently and is missing its offensive centerpiece due to the Olympics, the attacking numbers from Friday’s game look promising as Harvard enters its last few conference matchups.

“We felt like we weren’t getting enough pucks on secondhand opportunities,” said Fox of the power play’s recent issues. “That change for us was big, and it’s been clicking for us so far.”

While bottom-dweller St. Lawrence does not pose a threat in the conference standings, the win gives the Crimson a valuable two points, inching closer to third-place Clarkson. And none other than the No. 7/3 Golden Knights visit Cambridge on Saturday in Harvard’s last home game of the regular season and final chance for the Crimson to test itself against a ranked opponent.

“[Clarkson] should be ornery after not getting any points up in Hanover,” said coach Donato, referring to the Golden Knights’ upset loss at Dartmouth on Friday. “It’s a nice chance for us to challenge ourselves with a team that’s been one of the top teams in the country.”