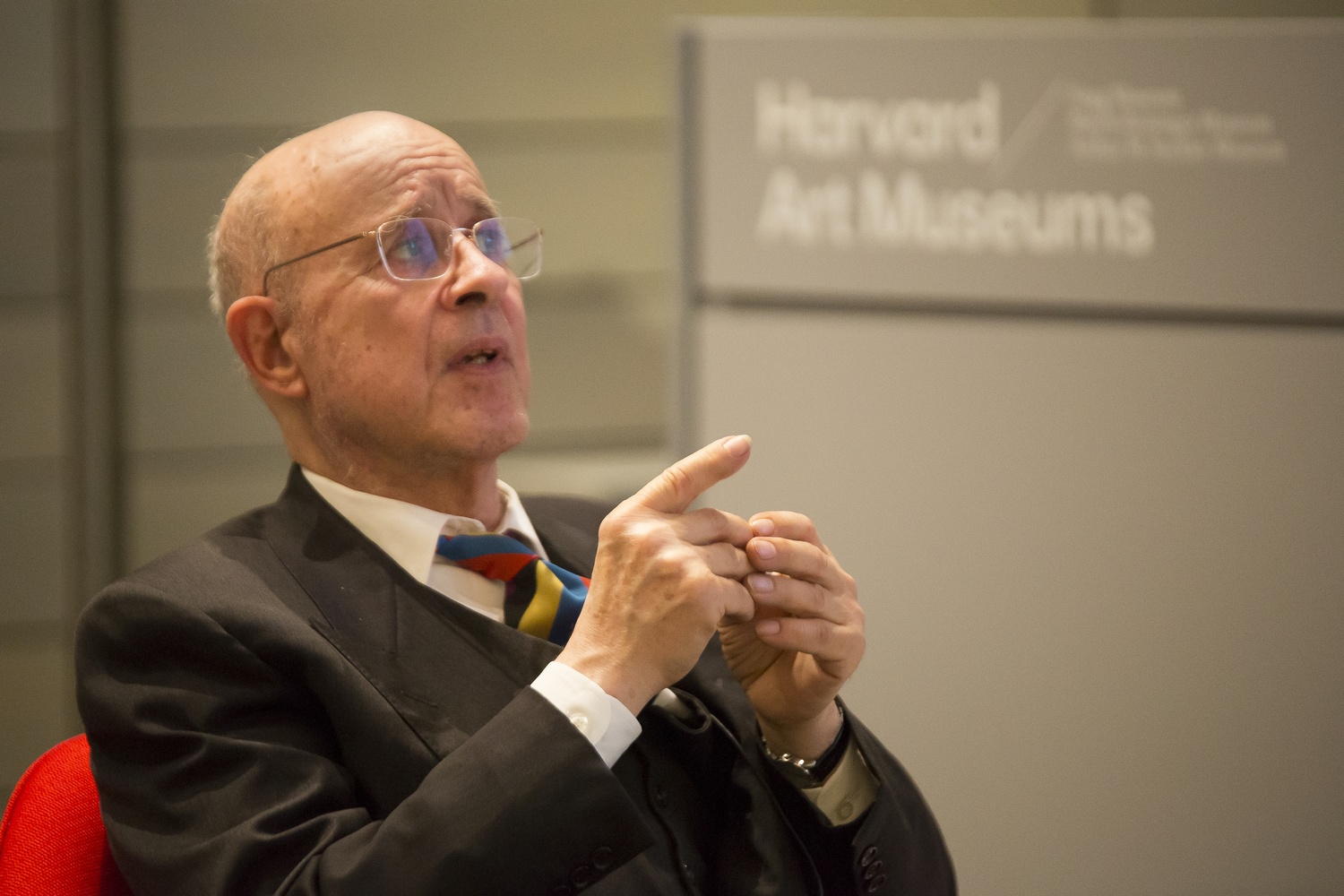 Lynette Roth, curator at the Harvard Art Museums, said that when she decided to open an exhibition showcasing German art from 1943-1955, she knew it would be a sensitive subject for a modern day audience. Most art historians consider the 12 years—spanning from right before the Nazi Regime collapsed to after West Germany’s commercial boom—to be a lost age in German art. Roth certainly proved them wrong. “Inventur - Art in Germany, 1943-55,” opened Feb. 9, featuring more than 160 works by almost 50 artists. The exhibit shows the multifaceted society of postwar Germany.

The opening celebration included a lecture by Konrad Klapheck, a renowned artist featured in the exhibition. The artist struck an emotional chord with the audience in the packed lecture hall—and through the simulcast—about the personal tragedy that affected his art.

“The lecture was very moving,” Philip Higonnet ’83 said. “But there was wonderful positiveness that came out of it, and that, if anything, broadened my perspective on how interesting the subject matter is.”

In his lecture, Klapheck acknowledged that the rise of the regime was a divisive moment for the German art community. “There were some gifted artists who sold their souls to the devil and were blinded by the idea of fame and fortune, but I am glad there were artists alive who refused to be bought,” Klapheck said. Focused on their newly unified regime, Adolf Hitler and Joseph Goebbels, leaders of the Reich, repressed art that rebelled against their message. In November of 1937, the Nazi regime held the Degenerate Art Exhibition, singling out modernist art and artists who threatened the newly established German culture. In the face of hostility, Klapheck said that German artists emigrated, were driven underground, ceased producing artwork, or were co-opted by Nazi propaganda. However, at the end of the war, all of those who stayed were forced to come to terms with the horrors of Germany’s past and redefine Germany’s identity for the future. According to Klapheck, this left the museum’s artwork with a complicated legacy to contend with, featuring work from both those who worked for and those who resisted the Nazi regime.

Several visitors to the exhibition believed Roth succeeded in her goal of reviving German postwar art history. Patrons said they left the exhibit with a greater understanding of the period. “It’s such an exciting opportunity to be seeing this stuff for the first time out of Germany,” Mitchell B. Polonsky ’19 said. “It’s this lost period of art that is just being to be revived now for the first time in a long time.”

Yet many were conflicted about the content matter given the crimes of Nazi regime, most notably the Holocaust. Michaela Antonis, a Cambridge resident who attended the event, said she felt uncomfortable knowing that some of the artists had been involved in the army and regime. She felt the exhibit lacked a point and didn’t seem respectable given the tragedy of the Holocaust. Indeed, the works in the exhibition scarcely make mention of the genocide that killed six million people, a fact that Roth attributes to the “collective amnesia” of Germans following the war and genocide, a willful blindness to the horrors committed.

Despite the unease of some attendees, other patrons were more receptive to the material. Gavin Moulton ’20, said he felt the exhibition was able to both inform and remain honest about the complexity of German postwar artistic narratives.

“The exhibition does a really incredible job of narrating this complicated story of artists who lived under the Nazi regime and continued to produce art after its death,” Moulton said.

Some students said the goal of the “Inventur” exhibition is to present the art of postwar Germany, not to expunge its crimes.

Alexandra Summa ’20 added that“it’s a confused identity.” It is this confused identity that lingers in the minds of patrons as they move through the art pieces depicting artists’ shock at the destruction of the German homeland, despondency as witnesses to its partition, elation at its revival, and failure to properly atone for its crimes. The Harvard Art Museums have brought to life a period of art previously unknown outside of Germany, and, in doing so, have brought to the forefront questions that still remain after World War II and the Holocaust: How do we judge great beauty spawned from a time of great evil?

The Inventur Exhibition runs from Feb. 9 to June 3 on the third floor of the Harvard Art Museums.