The Crimson nabbed both games this weekend against "North Country" opponents Clarkson and St. Lawrence 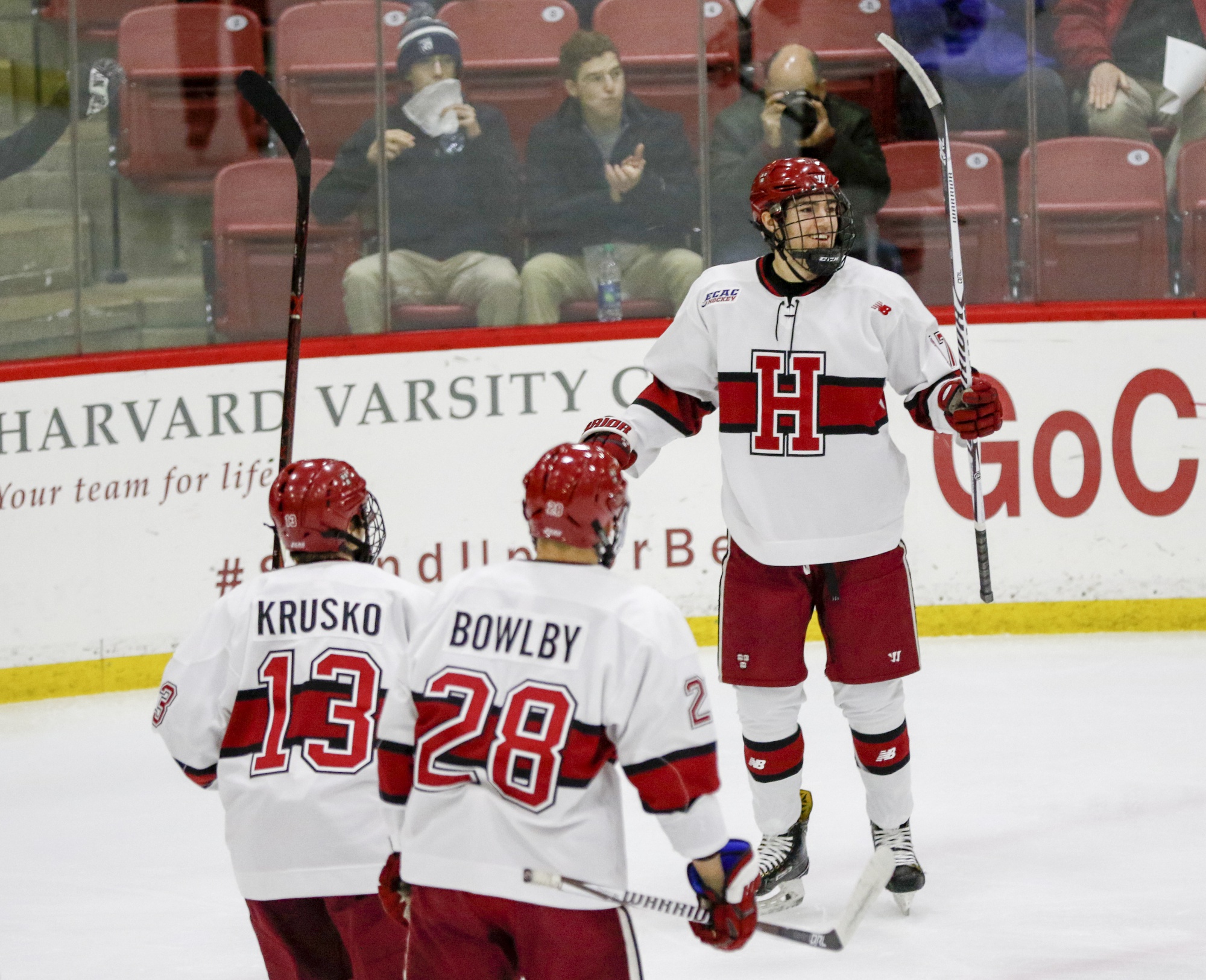 Sophomore forward Ty Pelton-Byce has filled the first-line center vacancy left by junior Ryan Donato, who is currently playing for Team USA in the 2018 Olympic Games. Pelton-Byce has fit in quite nicely, inking the score sheet in all four games he has played at 1C. By Timothy R. O'Meara
By Spencer R. Morris, Crimson Staff Writer

On Saturday, the Harvard men’s hockey team honored its seven seniors for their contributions to the program over the last four years. But in the Crimson’s 5-2 victory over No. 7/3 Clarkson, it was the underclassmen who carried the way.

“Those guys have been able to step up,” said associate head coach Paul Pearl, lauding the underclassmen. “We have some talented kids, and they’re getting opportunities…. You always say, ‘They’re not freshmen or sophomores, they’re a year above,’ when you get [this late in the season].”

After skating past a ranked Boston College team in Monday’s Beanpot consolation game, the Crimson (13-10-4, 11-6-3 ECAC) can add another top-20 team to its list of marquee wins this season.

Both Harvard and the Golden Knights (19-8-5, 11-5-4) were excited to lace them up again after January’s thrilling back-and-forth matchup, which ended in a 6-6 draw. Saturday night’s bout saw some similar stretches of call-and-response hockey.

Entering the second period, the Crimson was outpacing the opposition by a pair of scores. Clarkson wasted little time clawing back into the game, converting on a power play chance just 49 seconds into the middle third.

In the midst of a scrum in front of tri-captain Merrick Madsen’s pipes, sophomore forward Nico Sturm found a loose puck and forced it through traffic, narrowing the margin to just a goal. 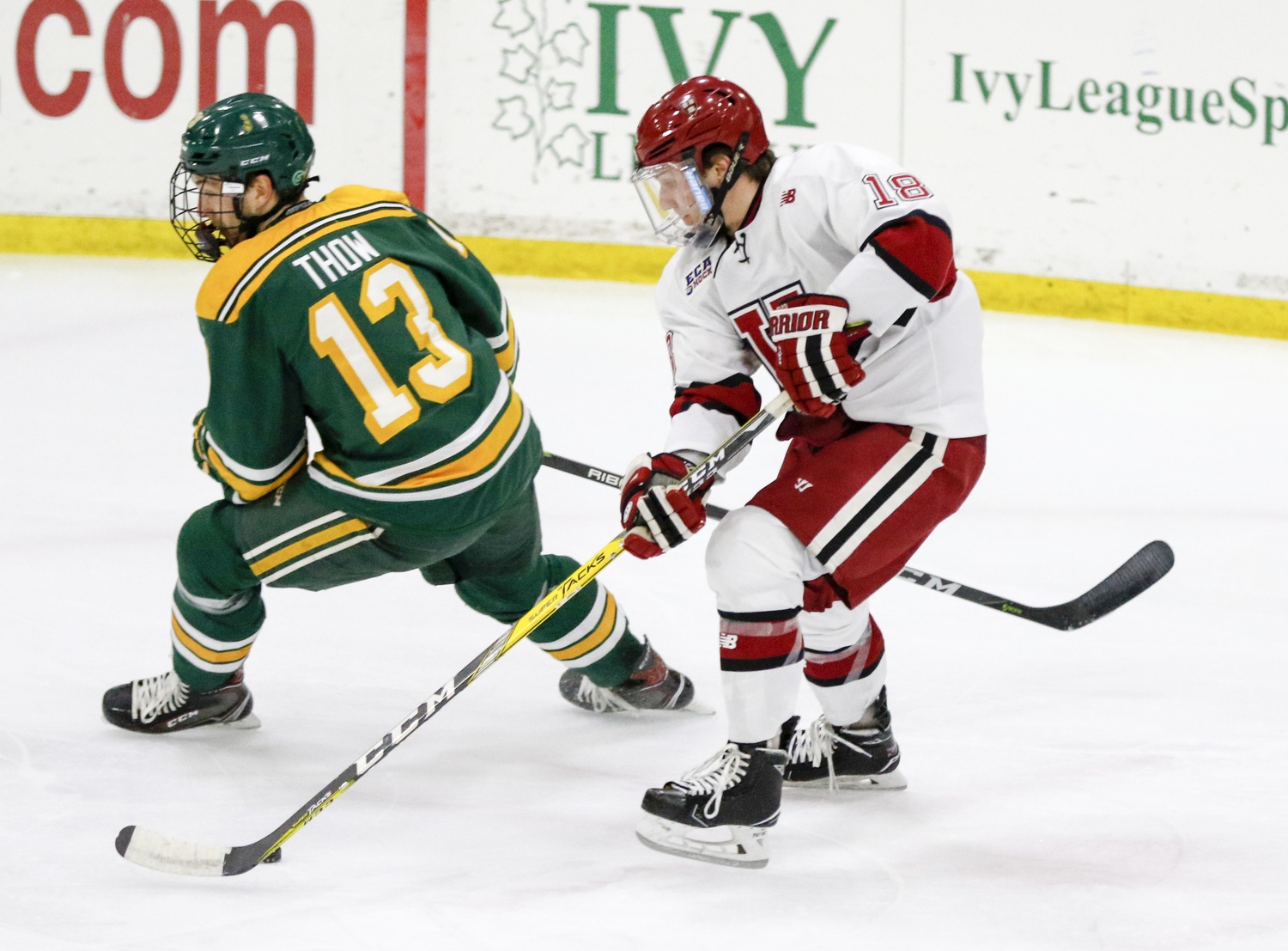 Sophomore blue-liner Adam Fox put forth a stellar performance this weekend, logging his first-career hat trick and manning a power play that saw a total revival after recently going through a 17-attempt dry spell. By Timothy R. O'Meara

“The key, for the coaching staff and for the players, is not to have an ‘Oh, no,’” said coach Pearl about conceding the early-period goal. “That wasn’t the first time someone scored a goal and we had to answer…. We responded really well to that.”

Harvard, preferring to play with a two-score cushion, soon restored the more comfortable lead. Rookie defenseman Reilly Walsh’s bar-down wrister sent a ping reverberating through the Bright-Landry Hockey Center. The goal would prove to be the game-winner.

Walsh’s power play strike marked the third straight game in which the Crimson has potted not just one, but multiple man-up goals. This recent special teams success is somewhat a relief, as Harvard failed to score on 17 straight attempts with the man advantage leading up to it.

“The first power play was really good,” coach Pearl said. “Our second one was bad, and our third one was about to be bad, but we threw one at the net…. Sometimes you have great power plays, and they’re not working.”

Following the Walsh snipe, the Golden Knights remained in a two-goal hole for almost an entire period until Sturm found the back of the net for a second time, once again from in-close on Madsen. The German centerman got rewarded for his persistent play in the “dirty” areas on Saturday night, registering his 11th and 12th goals of the season. 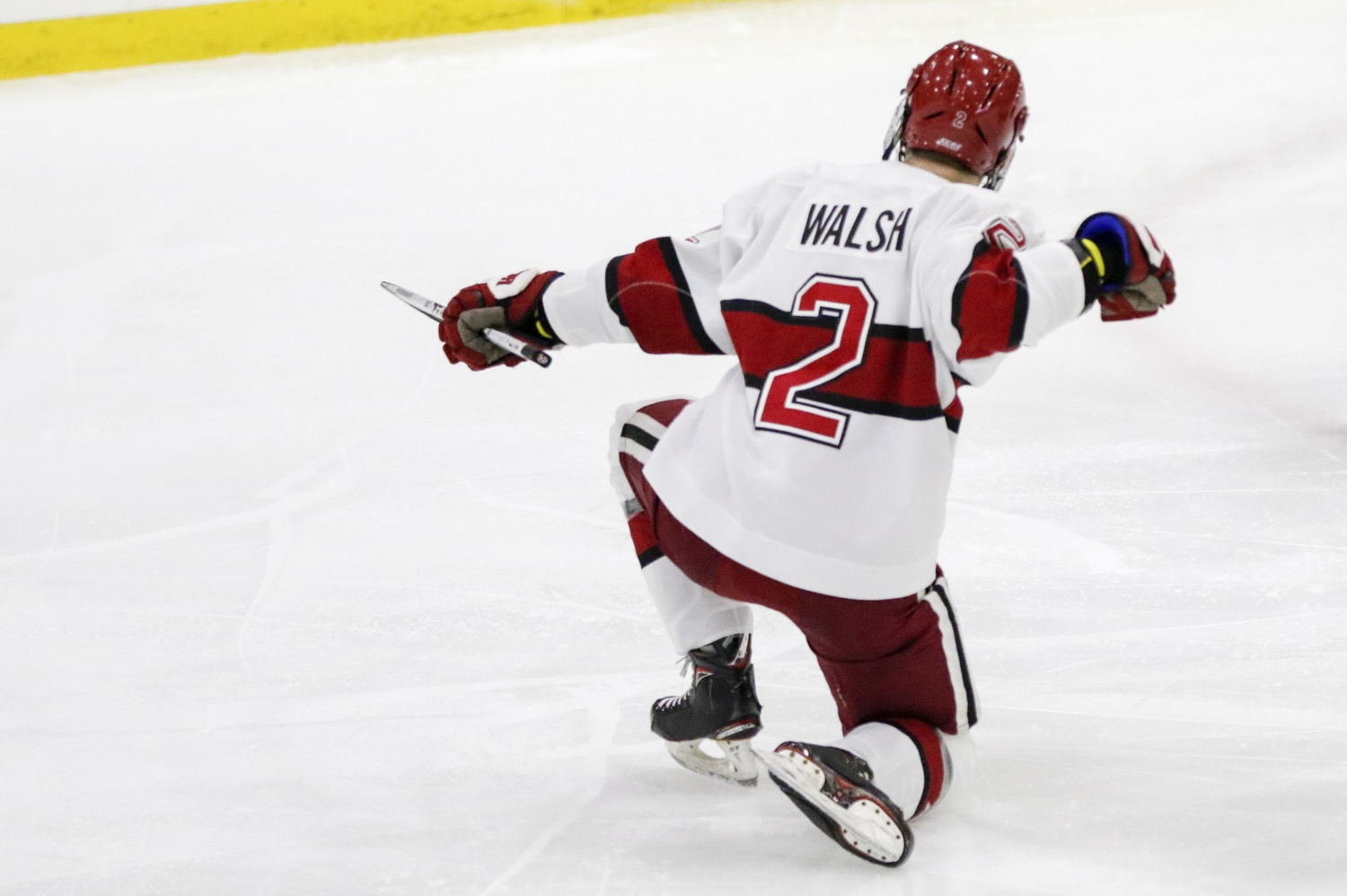 Freshman blue-liner Reilly Walsh scored a goal in both games this weekend and is looking like an Adam Fox prodigy, from a puck-moving, power play wizard standpoint. By Timothy R. O'Meara

But Sturm’s firepower was all Clarkson could muster, as Madsen (26 SV, .929 SV%) otherwise handled the top-10 team in his return to the blue paint after watching some games from the bench.

“It was Clarkson, that was something that I felt I had the opportunity for a little bit of redemption,” admitted Madsen, who allowed a goal from beyond the blue line before getting the hook in January’s meeting. “I had a chip on my shoulder a bit, but I have played enough games that it didn’t feel weird.”

Meanwhile, the Crimson began to pull away thanks to another power play tally—this time from freshman Jack Badini—and an empty-netter from the stick of Badini’s classmate, forward Benjamin Solin.

Solin’s capstone from half-ice put a bow on one of Harvard’s more complete games of the 2017-2018 campaign. Couple that with the fact that besting the “North Country” teams—Clarkson and St. Lawrence—is never a cakewalk, and you have a content Crimson squad.

“A lot of the seniors had great games too, contributing in different ways,” tri-captain Jake Horton said. “It’s never easy to sweep the North Country, so [I’m] really happy with everybody.”

In the two teams’ previous meeting this season, it took Clarkson all of one minute to light the lamp. This time around, however, Harvard was the first squad to score.

Just under five minutes into the contest, the puck worked its way up to the point and across the ice to junior Jacob Olson. The defenseman fired a puck wide of the cage, where it was corralled by freshman forward Henry Bowlby at the goal line. Bowlby shoved it toward the net and linemate Ty Pelton-Byce was there to punch it home through both skates and pads.

Thanks to the opening tally, Pelton-Byce has nabbed at least a point (2–3—5) in all four games since replacing junior Ryan Donato—currently representing team USA in the Pyeongchang Olympics—as the team’s top-line center.

“Ty is one of those [Swiss Army] knife guys,” coach Pearl said. “Now, he’s thrust into a bigger spot, so you either back off from that or do a good job with it…. He’s such a nifty kid. Everything about his game since the day he got here has improved.”

The Madison, Wis., native’s tip-in wasn’t the only underclassman contribution that the first period had in store. Eight and a half minutes later, sophomore point-man John Marino strode into the offensive zone with the puck and flung it toward the net-mouth as he approached the goal line. 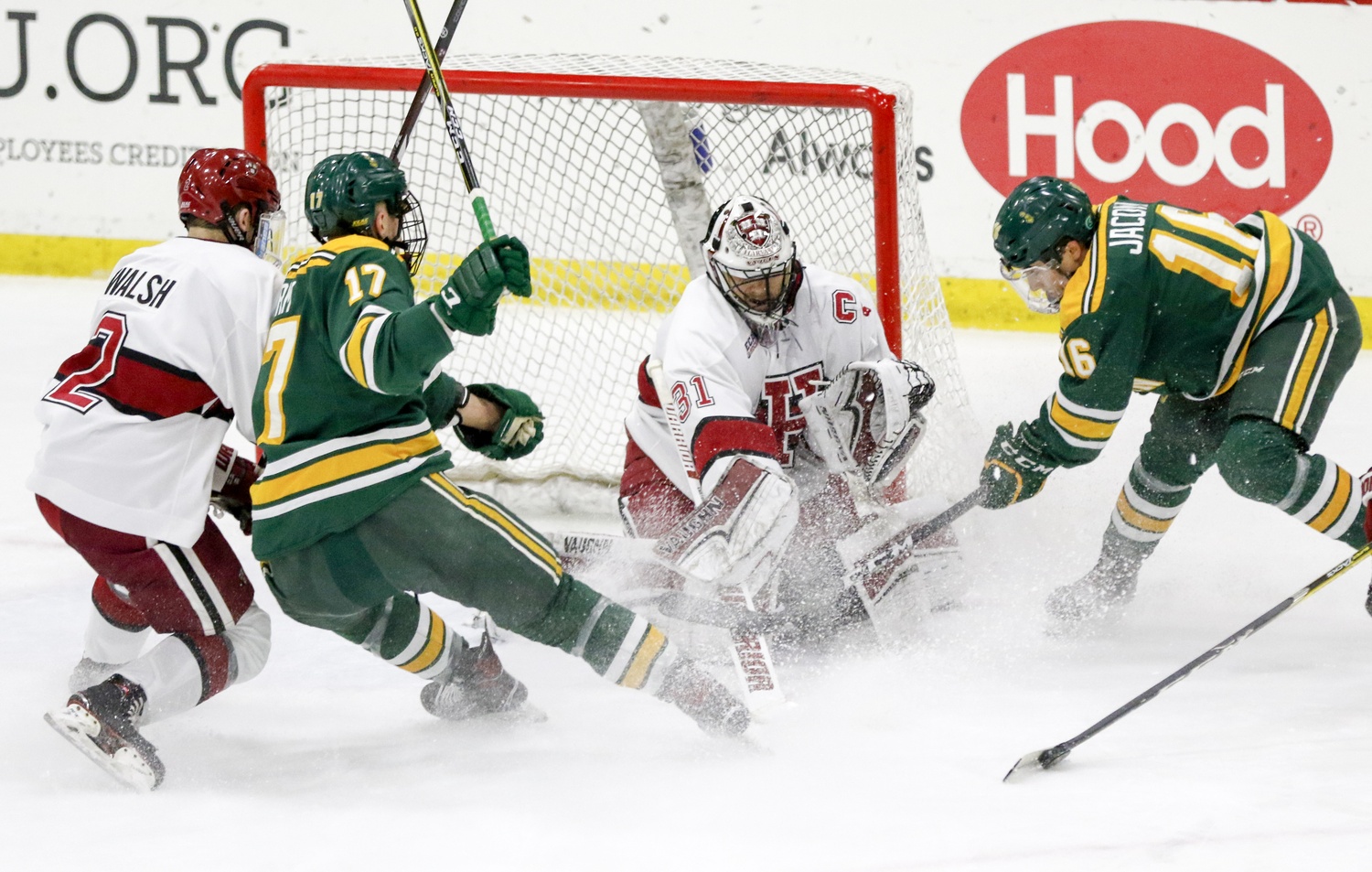 Tri-captain Merrick Madsen, one of the seven fourth-years honored in Saturday's senior night ceremony, made his return to the blue paint and put forth a solid performance (2 GA, .929 SV%) in his team's victory. By Timothy R. O'Meara

A charging Eddie Ellis made a play for the puck, hoping to chip it past freshman tender Nicholas Latinovich, but the tri-captain never got his stick on it. That’s because he didn’t need to, though, as Golden Knights defenseman Jere Astren kicked the puck into his own net.

After Marino’s first-period goal, Clarkson coach Casey Jones yanked Latinovich from between the pipes and replaced him with the team’s usual starter, sophomore Jake Kielly.

Marino was not the only sophomore blue-liner to make an impact this weekend for the Crimson. Adam Fox, fresh off his first-ever hat trick in Friday’s win over St. Lawrence, looked to be firing on all cylinders against Clarkson as well. The offensive-minded defenseman loomed large on the power play and showed off his nifty mitts with a few precision-passes and dangles around the opposition.

“He’s so smart and has such good hockey sense, that he makes a lot of things out there look easy,” coach Pearl said. “And certainly, as a former defenseman who couldn’t skate—you have to coach him so you can’t let him know that—but you look at him with a little bit of awe, like the little subtle plays he makes breaking the puck out.”

In addition to his stellar goals, breakout passes, and power play coordination this weekend, Fox was in the thick of a very chippy contest on Saturday. After the second-period horn had sounded, the Jericho, N.Y., native took a crosscheck to the back and, upon getting back on his feet, found himself dodging haymakers from Clarkson captain Nic Pierog. 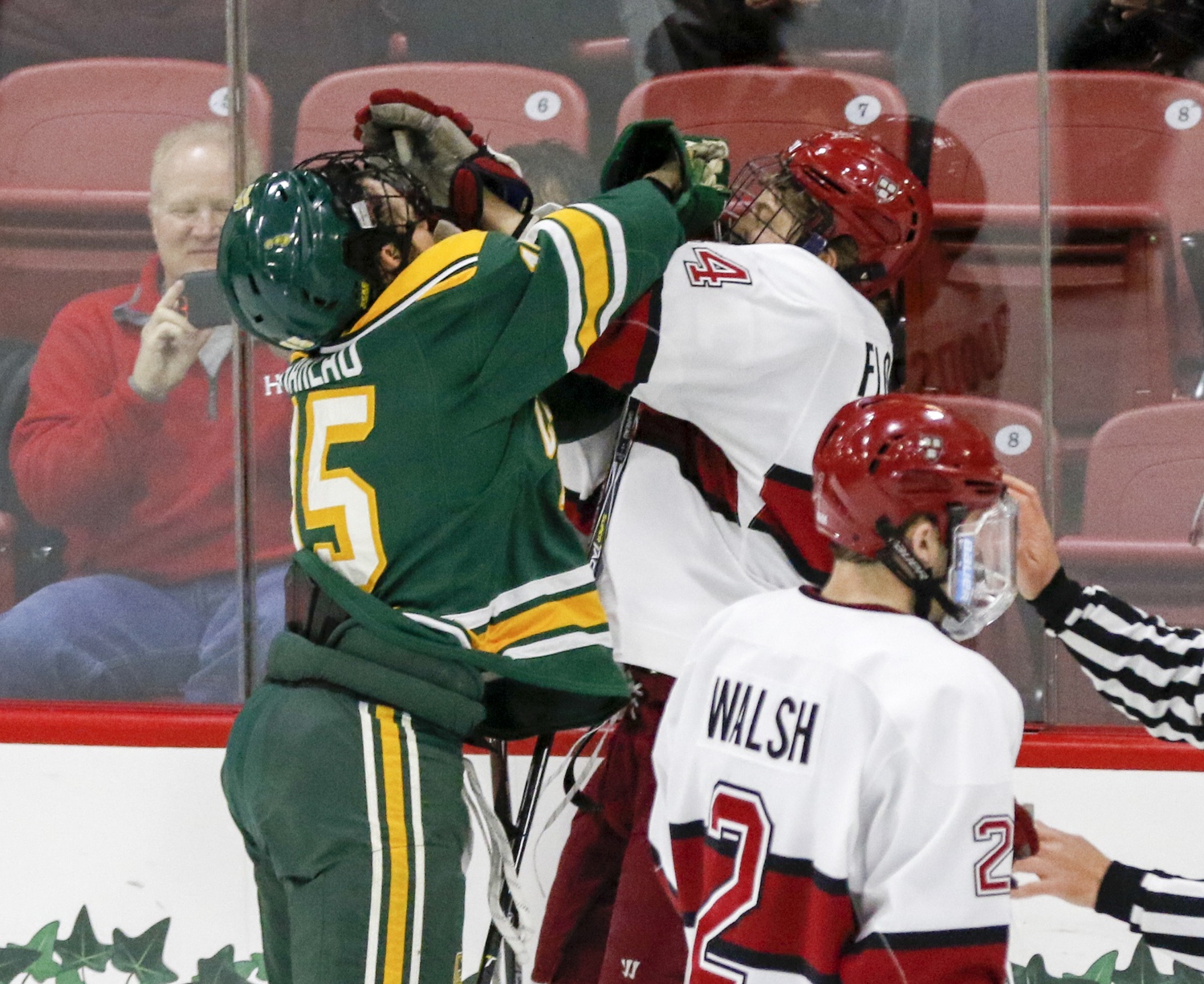 Junior Michael Floodstrand, pictured here, was one of many players involved in the chippy, physical match on Saturday night. By Timothy R. O'Meara
Advertisement

“Clarkson’s always a team that plays a little chippier,” Madsen said. “Once they weren’t getting the results they wanted, they started getting a little chippier, a little more chaotic. I think our guys did a decent job staying out of it. Obviously, there were a couple instances of coincidental [minor penalties].”

With the decisive victory on Saturday night and a solid performance overall in its final regular season weekend at the Bright, the Crimson has clinched a top-four spot in the ECAC and will enjoy an early-March bye week in the conference tournament along with Clarkson, Cornell, and Union.