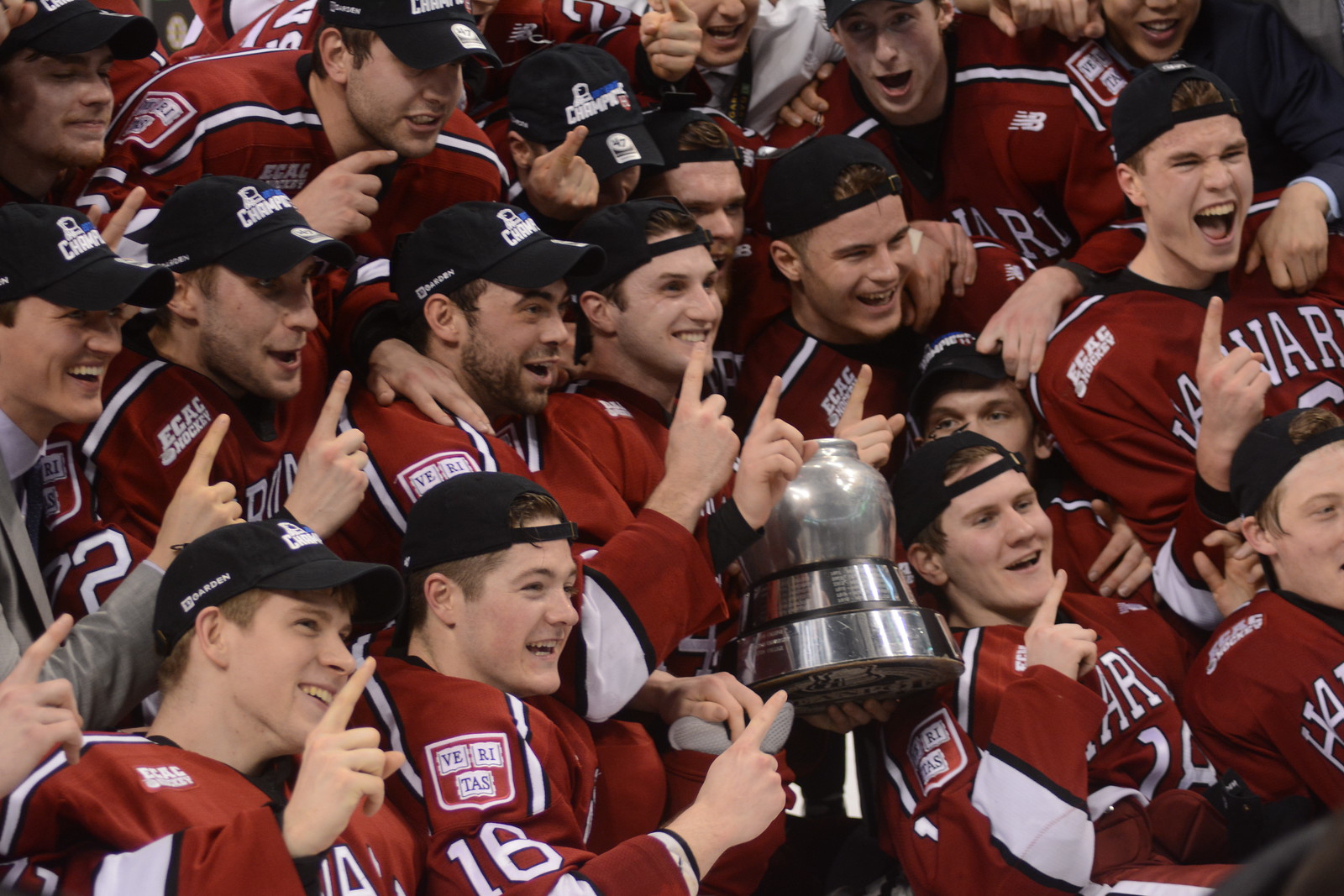 Last season, Harvard ended its 24-year drought and captured the program's 11th Beanpot title. The victory has since ushered in a revitalized interest in hockey around campus. By Thomas W. Franck
This year, with the triumphant taste of last season still fresh in players’ mouths, the Crimson faces off against the Terriers in a rematch of the 2017 finale, hoping to expunge one of the tournament’s old nicknames (the "BU Invitational") once and for all.
By Spencer R. Morris

February has rolled around once again, and hockey has filled the air. Come Monday, fans will fill the seats of TD Garden for the yearly spectacle that awaits: Boston’s four most historic hockey programs are set to clash in the 66th annual Beanpot Tournament.

The event is known most notably for its tradition. Yet, last season, one of the Beanpot’s more steadfast traditions in recent decades wavered: for the first time since 1993, a team without “Boston” in its name took home the trophy.

Harvard overpowered Northeastern in the semifinals before torching Boston University in the championship game to secure its 11th Beanpot in school history, ending a 24-year drought. During this dry spell for the Crimson, the Comm. Ave. schools divvied up the titles amongst themselves, also excluding the Huskies from the fun.

“The tournament has been referred to as the BU invitational in the past,” Harvard coach Ted Donato ’91 said. “They’ve had a lot of success…. You hear it said almost every year, but I don’t think there’s any question that you wouldn’t be surprised if any one of the four teams won it this year.”

Through two periods, last season’s showdown between these teams remained close—at least on the scoreboard. In reality, though, Harvard put forth a statement performance, limiting BU to 17 shots overall and just two in the opening frame. On top of the rigid defensive effort, the Crimson skaters netted six goals on 46 shots en route to the 6-3 rout.

“What that did for us is it really kind of revived a lot of the excitement about Harvard hockey on campus, trying to get more students to come to games and stuff like that,” Harvard tri-captain Jake Horton said.

That decisive victory propelled Harvard to new heights in the Ted Donato era. The team carried its momentum from the Boston hockey classic to the Ivy League crown, the ECAC regular season and playoff championships, the East Regional title, and all the way to its first Frozen Four berth since 1994. 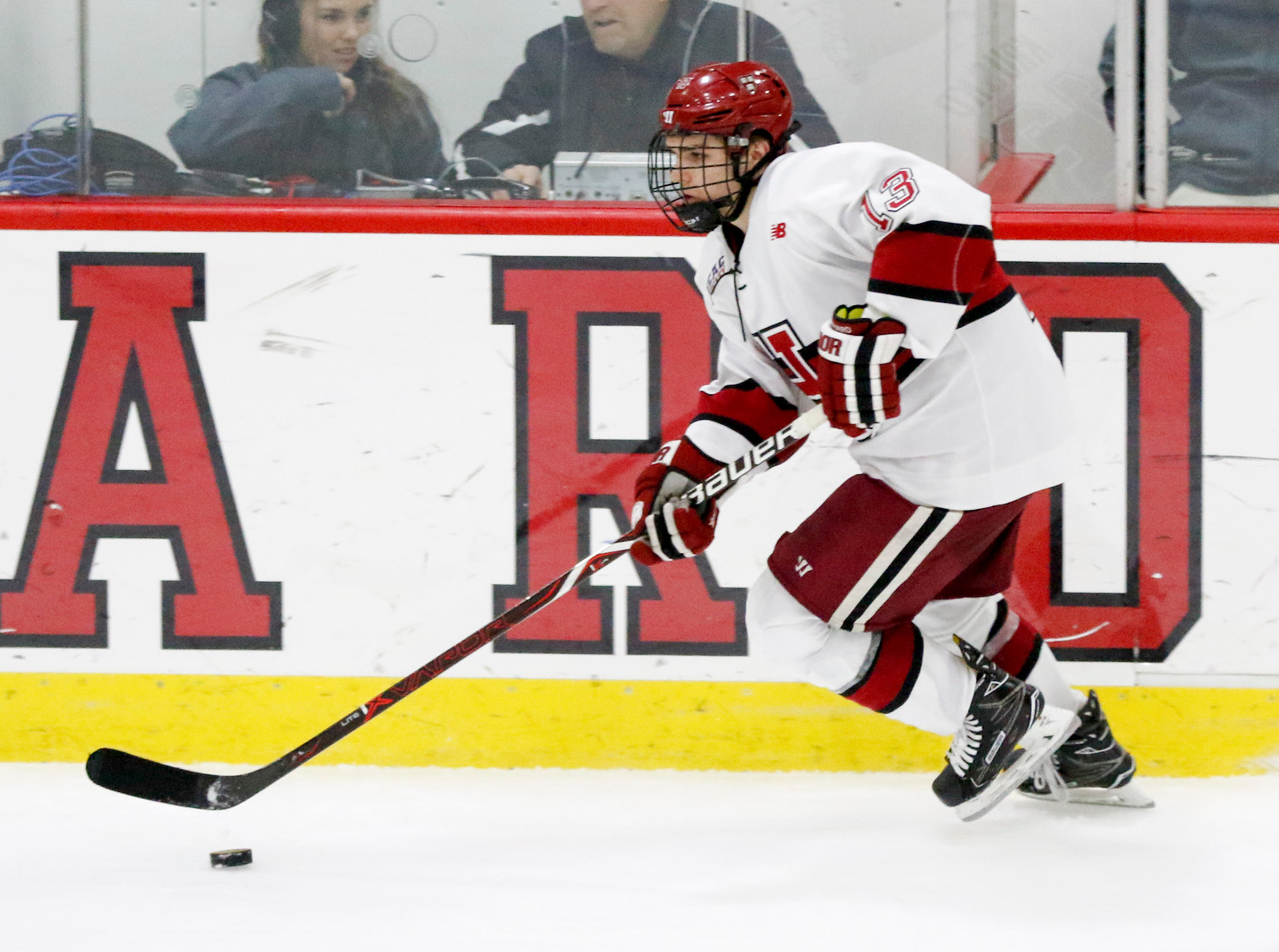 While last season’s matchup involved two top-five teams, both squads enter Monday’s bout on rockier terms than they did a year ago. So, the Beanpot marks a potential turning point in the teams’ seasons. Whatever the records to this point, the tournament has a special meaning about it that can rejuvenate a season in a single night.

Alas, just one of the teams will leave TD Garden satisfied in a few nights. Either the Crimson double down on BU, or the Terriers get revenge—not both. And last season’s tilt only adds to the drama.

“We got to know that it’s not going to be like that again,” said junior forward Ryan Donato, referring to the 2017 title game. “We did play well, but we were a different team last year…. This year, we play more sound and stick to our systems, and things will come our way, but we just got to worry about our game.”

Despite starting the campaign as the preseason No. 2 seed, BU has been on the wrong end of its difficult schedule, containing such competition as No. 1 Cornell, No. 4/5 Denver, No. 7 Minnesota State, and No. 8 Providence (current rankings). The Terriers have also gone a lackluster 1-2-1 against Beanpot competition this year, splitting with BC and getting swept by Northeastern.

The Crimson’s story this year hardly strays from BU’s. Unranked status soon replaced Harvard’s optimistic top-five preseason projection, as a record nine-game road stretch featuring some of the country’s fiercest teams derailed the Crimson’s season early on. Since then, it has been an uphill climb for coach Donato’s group, who had been cruising unbeaten through the 2018 portion of its schedule (4-0-3) until hitting a roadblock last weekend versus Cornell and Colgate. 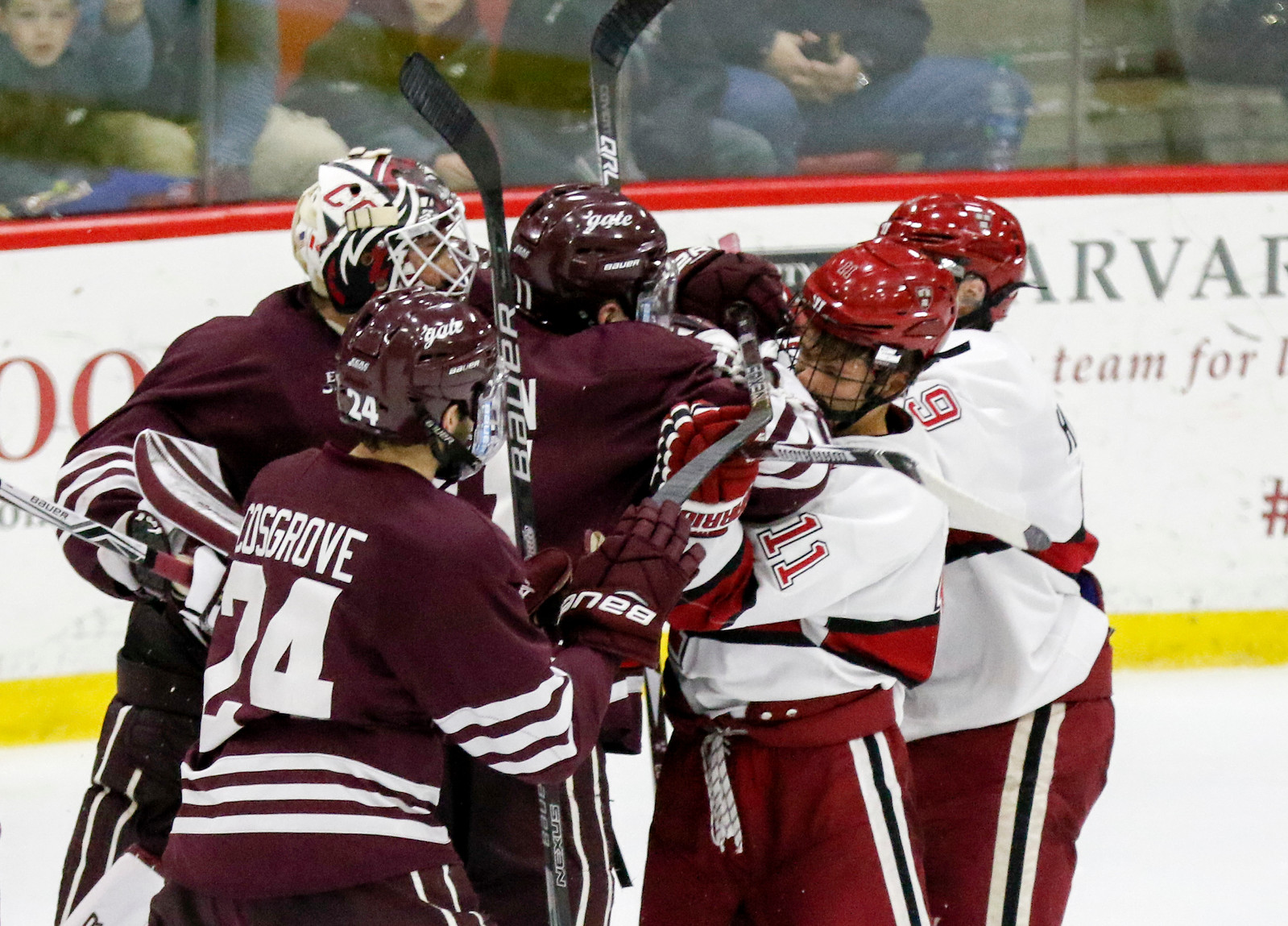 The Crimson saw its unbeaten streak in 2018 come to a close in frustrating fashion, as the team suffered consecutive shutout losses last weekend and simply couldn't punch through the opposition's goalie By Timothy R. O'Meara

“BU is in a similar situation to us,” coach Donato noted. “It thinks that, ‘hey, we got a better team inside this shell, and let’s keep working at it to see if we can get it there as quick as possible.’”

Before its current six-game unbeaten streak (5-0-1), BU sat below the .500 mark at 8-11-1. Even now, at 13-11-2, the Terriers have underwhelmed this season, especially considering the talent that—like always, it seems—they bring out onto the ice.

Some of this talent turns over from year to year, as high-end NHL prospects have a history of leaving BU early to pursue professional careers—think Jack Eichel, Charlie McAvoy, and Clayton Keller more recently.

“Last year, they had guys like Keller and McAvoy, just the big names, and they have a lot of good guys that are still there, and they have a lot of good young guys,” Ryan Donato said. “I think we’ve learned that it’s not all about talent at the end of the day. We have talented guys on our side as well, so I think…what’s going to decide the game is hard work and determination to get a win.”

Donato’s dad, who doubles as his bench boss, likewise acknowledges the pure talent on the Terriers’ roster.

“They’re one of the most talented teams in the country, quite frankly,” coach Donato said. “They’re also young, so some of that talent hasn’t matured to where it’s going to be. [But] they certainly have some game-breakers.”

Even with this yearly turnover, the Terriers program is far from the Kentucky basketball-esque revolving door of freshman talent. The squad returns key pieces such as junior forwards Jordan Greenway and Bobo Carpenter, not to mention captain defenseman Brandon Hickey.

Greenway, a 6’5” freight train with 5’11” hands, will join Harvard’s Donato in representing team USA in the 2018 Winter Olympics later in February. The Minnesota Wild prospect will break a 98-year color barrier in US Olympic hockey when he dons the red, white, and blue. Carpenter, son of ex-NHLer Bobby, paces his team in scoring this season with 26 points (16–10—26) and can play on the wing or down the middle.

Adding freshmen Brady Tkachuk, Shane Bowers, and Logan Cockerill to the mix up front only bolsters an already-dynamic group. This forward corps averages 3.23 goals per game, good for 12th best in Division I and well ahead of Harvard’s 30th-best 2.90 clip.

On the back end, BU is just as dynamic. Even with the loss of McAvoy last season to the Boston Bruins, the program returns four top-six regulars. What’s more: the Terriers’ blue line is so deep that the seventh defenseman on any given night—who watches the game from the press box—is an NHL draft pick thanks to the offseason additions of rookie Kasper Kotkansalo, Cam Crotty, and David Farrance, all of whom are NHL draftees.

“Their defense corps, top to bottom, is—I think they have seven NHL draft picks,” marveled coach Donato, almost hung up on the notion of that fact. “They’re not that young on the blue line. They have Hickey. They have MacLeod.” 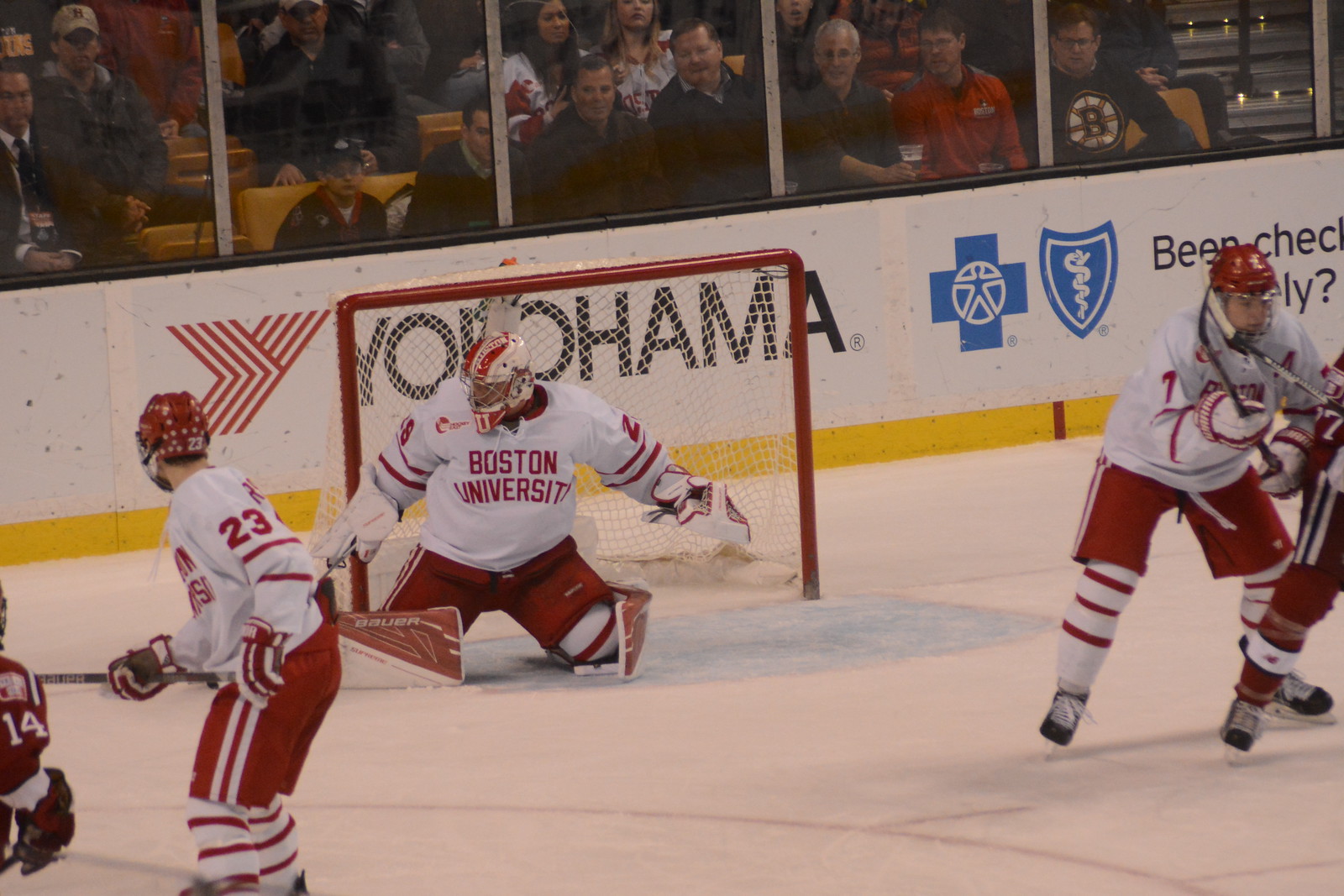 Somewhat confusingly, this star-studded defense has struggled to keep pucks out of the net this year, allowing a middling 2.73 goals per game. The Crimson bests BU in this regard, ranking 14th in the NCAA for ceding just 2.48 per night.

Relative to coach Donato’s squad, the Terriers’ shortcomings on defense essentially negate their advantage on offense, as BU and Harvard sit at No. 15 and No. 16, respectively, in average goal margin (+0.50, +0.43).

In short, the numbers pin Monday’s foes as close competition, and one bounce may be all it takes to decide who moves on to the Beanpot final. This bounce could easily come on the power play, which played a role in last year’s championship tilt, allowing the Crimson to pull away early in the third period.

It’s no surprise that the foes’ special teams numbers shadow their overall offensive and defensive stats. Harvard has a distinct advantage on the penalty kill, placing 17th in the country with a 83.1% kill rate. The Terriers sit all the way at No. 49 in this regard (78.2%). The power play comparison is almost identical, but with the advantage going the other way. BU executes at a 15th-best 21.7% clip, while the Crimson ranks 30 spots below (15.4%).

While both teams have a legitimate shot at advancing on Monday night, there are no easy paths to the Beanpot crown. Coach Donato isn’t mincing words, but is also looking forward to the challenge.

“On the coaches’ side of it, nobody really is looking forward to playing BU right now,” the bench boss said. “One of the reasons why, way back when, we were excited about going into Madison Square Garden or playing at a place like Minnesota on the road is we wanted to expose our guys to situations where there was high stress and the spotlight was pretty bright. Monday night will be one of those times.”

The Beanpot is all about big teams and big stages. And Monday night will see a clash of two teams fighting to revitalize their seasons with all of Boston watching. This year, Harvard will play in a rare “late game,” the 8 p.m. puck drop rather than the 5 p.m. slot. Eight of the last 10 late games have gone to the other tournament teams on account of the larger local crowds they attract.

But with the Crimson back in the public eye after nabbing the Beanpot title last season, the squad will relish the opportunity to play in the more electrifying late-game setting. Harvard’s freshmen, despite having already played at some big-time rinks this season—Lynah, Conte Forum, and Mariucci—will get to experience the full effect of hockey in Boston.

“Especially being the late game for once,” Madsen said wryly, “Just being out there for warmups and having the whole Garden filled while you’re there for warmups, I think right away guys are going to realize what this means.” 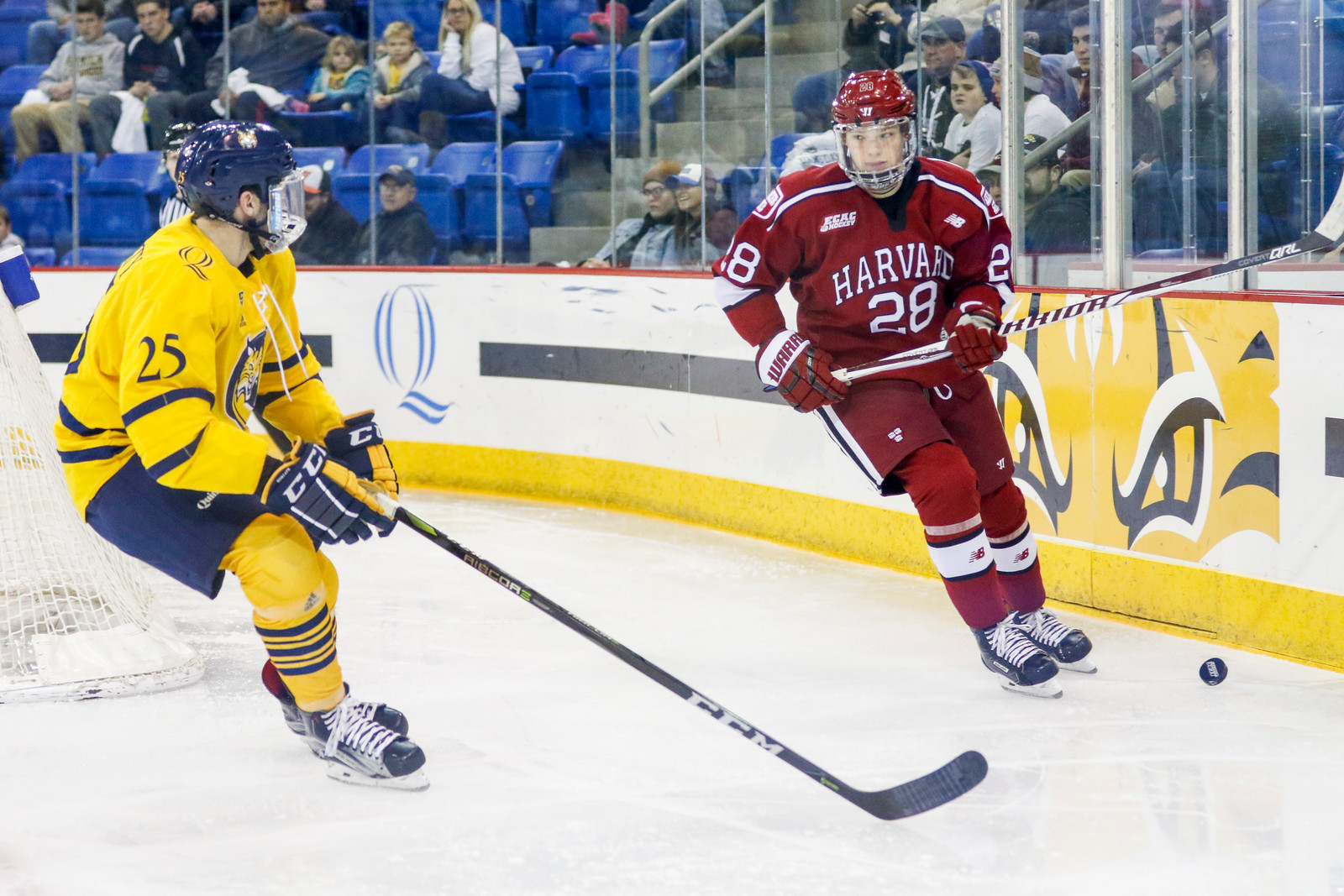 Freshman forward Henry Bowlby, pictured here at Quinnipiac in December, will hopefully make his return to the Crimson lineup in the coming games. By Timothy R. O'Meara

Among these freshmen is forward Henry Bowlby, who is making progress in recovering from an illness that sidelined him for six games. The rookie has recorded 10 points (5–5—10) through 15 games this season and still paces his squad in plus-minus.

Bowlby, who was back on the ice for practice this week, could possibly return even before the Beanpot for Friday’s matchup at Dartmouth. Either way, the Edina, Minn., native may provide an extra jolt of offense that the Harvard icemen, victims of two shutouts last weekend, desperately need.

Come Monday, Bowlby will look to a fellow Minnesotan in Horton for inspiration.

“As a freshman…I remember all the seniors were talking about, ‘Oh, Beanpot, Beanpot,’” Horton recalled. “I was like, ‘what are they talking about?’ just being from Minnesota, and now, last year, there was nothing I wanted to win more, except for maybe the Frozen Four.”

Besides, who would want to miss his first Beanpot?

Not Bowlby. Not anybody.