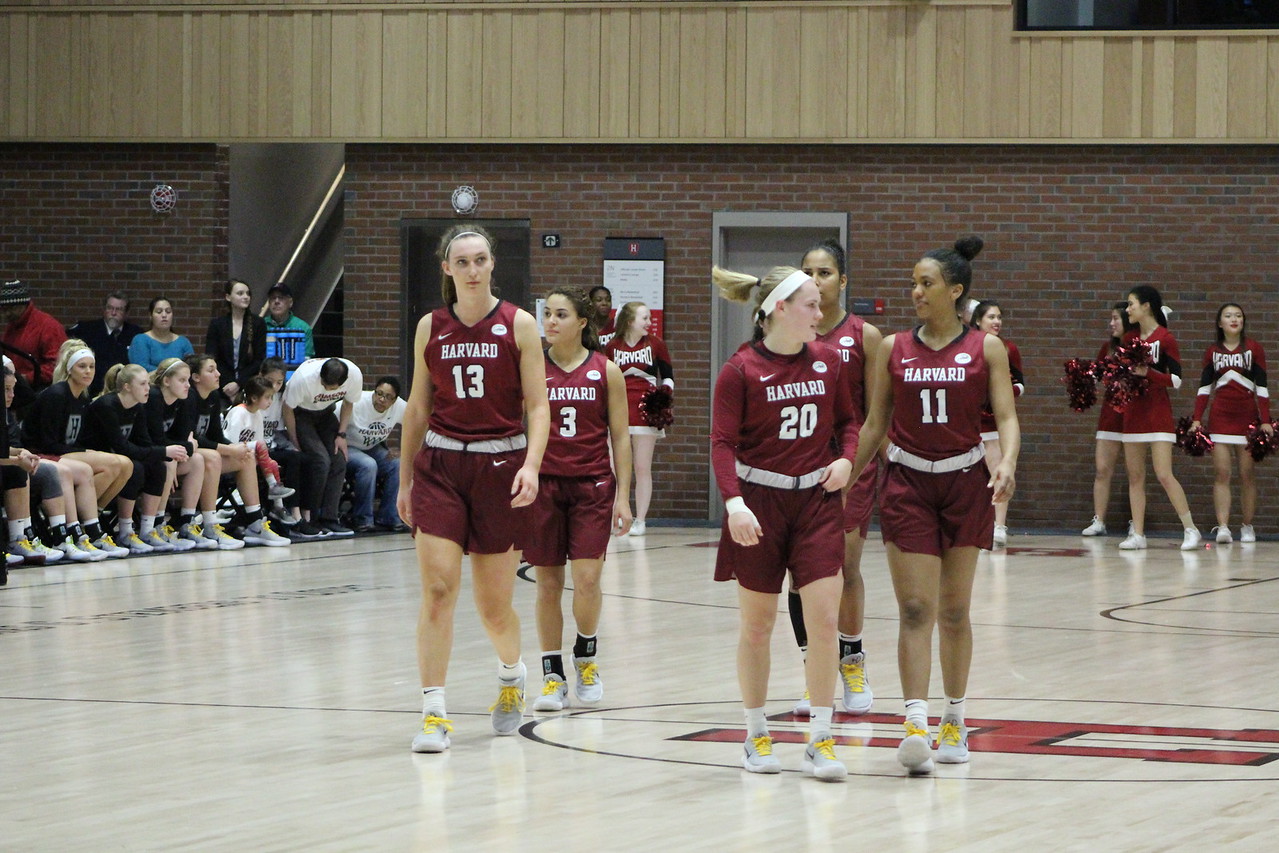 Harvard women’s basketball recorded its first road win in conference play, but came up a rebound and a basket short of recording its first road sweep and practically guaranteeing its chances of making the Ivy League tournament.

Instead, the Crimson remain tied with Yale and Dartmouth with just four games remaining, with only two of the three teams able to advance to the Ivy League tournament in Philadelphia.

A back and forth affair in New Haven ended in agony for Harvard, who came up just short of sweeping the Bulldogs for the season, ending up on the wrong side of a 69-63 final.

The crucial play of the game came with under 30 seconds remaining, as Yale’s Tamara Simpson sat at the line for two free throws, with the Bulldogs (13-10, 6-4 Ivy) leading by just one point. Simpson, a 63 percent free throw shooter, erred on the first shot, then the second, seemingly leaving the door wide open for the Crimson (14-9, 6-4) to steal a victory.

Unfortunately, Simpson, attempting to atone for her missed free throws, tracked the second miss down as it clanged off the back heel of the rim and right to senior guard Tori Andrew.

Harvard, forced to foul again, would have no such luck the second time around, as Andrew knocked down a pair of shots from the penalty stripe. A miss by sharpshooting, sophomore Katie Benzan from three-point territory was corralled by Yale, and the game was effectively over.

“Pretty disappointing, but Yale is fighting for their lives, as were we,” coach Kathy Delaney-Smith said of Saturday’s loss. “I always am concerned about beating a team by 30, and then being on the road.”

Had Harvard been able to rebound Simpson’s miss, it would have trailed by one point with 20 seconds left, and been able to hold for a final shot to win the game. The failure to rebound was a cruel twist of fate for the Crimson, which dominated Brown on the glass the night before, and outrebounded the Bulldogs by six on Saturday night.

Saturday’s contest was a back-and-forth affair between the two rivals, nothing like the 97-73 win Harvard cruised to in the first meeting between the two. The game featured five ties and 10 lead changes, with the Crimson losing the turnover battle by a 13-7 margin, a familiar statistic in the losses the team has suffered this season.

“It was unfortunately the perfect storm, Yale played great to be honest, they had some kids knock down some big shots,” Delaney-Smith said. “Our kids played really hard too, it was just the perfect storm.”

Despite Harvard outshooting the Bulldogs by a 40-37 percent margin, and winning the rebound battle, the Crimson was unable to overcome Yale, anchored by Roxy Barahman and Jen Berkowitz, who combined for 37 points. Sydney Skinner and Taylor Rooks led the way with 13 apiece for Harvard.

Harvard rode explosive shooting and domination on the glass to a 86-74 win over Brown in Providence, giving the Crimson its first road win of the Ivy League slate. The visitors shot an impressive 50 percent from the field, and outrebounded the Bears (14-9, 2-8) by a whopping 41-23 margin.

Although Harvard led by double digits for much of the third quarter, Brown refused to surrender, employing a full court press, forcing Harvard into turnovers and narrowing the lead to five.

But in the dying seconds of the third, Rooks converted from deep to give Harvard an eight-point lead entering the 4th quarter. The Crimson would fend off the Bears throughout the fourth quarter, knocking down key free throws to coast to a 12-point victory, its seventh straight win over Brown.

The Bears sat at 2-6 in conference play entering Friday night’s game, making the contest a do or die for Brown, with a loss likely eliminating the Bears from Ivy League tournament contention.

Harvard, who entered the matchup 0-3 on the road in Ancient Eight play, hoped to avoid the slow starts that had plagued the team away from Cambridge.

Rooks and Madeline Raster quickly obliged, knocking down a layup and drilling a three on the ensuing possession to give Harvard a quick 5-0 lead.

Despite early foul trouble for the Crimson, with starters Rooks and Kirby Porter with two fouls each in the first five minutes, the visitors’ bench production helped them pull away.

Freshman Jadyn Bush immediately contributed, converting two consecutive layups, the second one was followed by a free throw to complete the three-point play.

Layups from Skinner and Raster stretched the lead to 18-8, completing an 11-0 run, and Harvard would never trail after that point.

“Playing Brown at home, we played them really close,” Benzan said. “Friday night on their court, we knew we had to come out firing, and that’s how we came out.”

The Crimson’s depth overwhelmed Brown immediately, as the visitors rang up an 11-0 advantage in bench production, in the first quarter alone.

Jeannie Boehm returned from an injury scare at Penn, keeping Harvard’s lineup the same for the 23rd straight game. The sophomore forward from Winnetka, Ill., showed no ill effects of an injury, recording an early block down low, before converting on a sweet hook shot in the paint. Boehm finished with 11 points, finishing a rebound short of a double-double.

The Crimson also impressed on the defensive side, keying in on top scorers Shayna Mehta and Justine Gaziano. Mehta and Gaziano, each averaging over 18 points, were kept scoreless through the first 13 minutes of the game, and would score just four first half points combined.

Freshman guard Dominique Leonidas picked up much of Mehta and Gaziano’s slack Friday night, scoring a career-high 21 points on 8-12 shooting from the field, easily eclipsing her previous career high of 12.

Keeping Gaziano contained was especially crucial, as the sophomore from Natick, Mass., exploded for 28 points in the first meeting between the two teams, a 85-83 home win for Harvard. Gaziano would finish with just 13 points, many of them coming late into the fourth quarter.

On the offensive end, six players would score in double figures for the Crimson, with Benzan leading the way with 20 points on a familiarly impressive 7-9 shooting, knocking down 4-6 three pointers, chipping in four rebounds and four assists. Raster was also especially impressive, stuffing the stat sheet with nine rebounds, five assists, and two steals, to go along with 14 points.

With visits from conference leading Penn and Princeton looming next weekend, Harvard will put its home win streak dating back nearly a year, as well as its playoff chances, on the line.

“We just need a W,” Benzan said. “We’re working practice by practice, getting better every day, focusing on the little things, and hopefully those little things can add up to a win this weekend.”