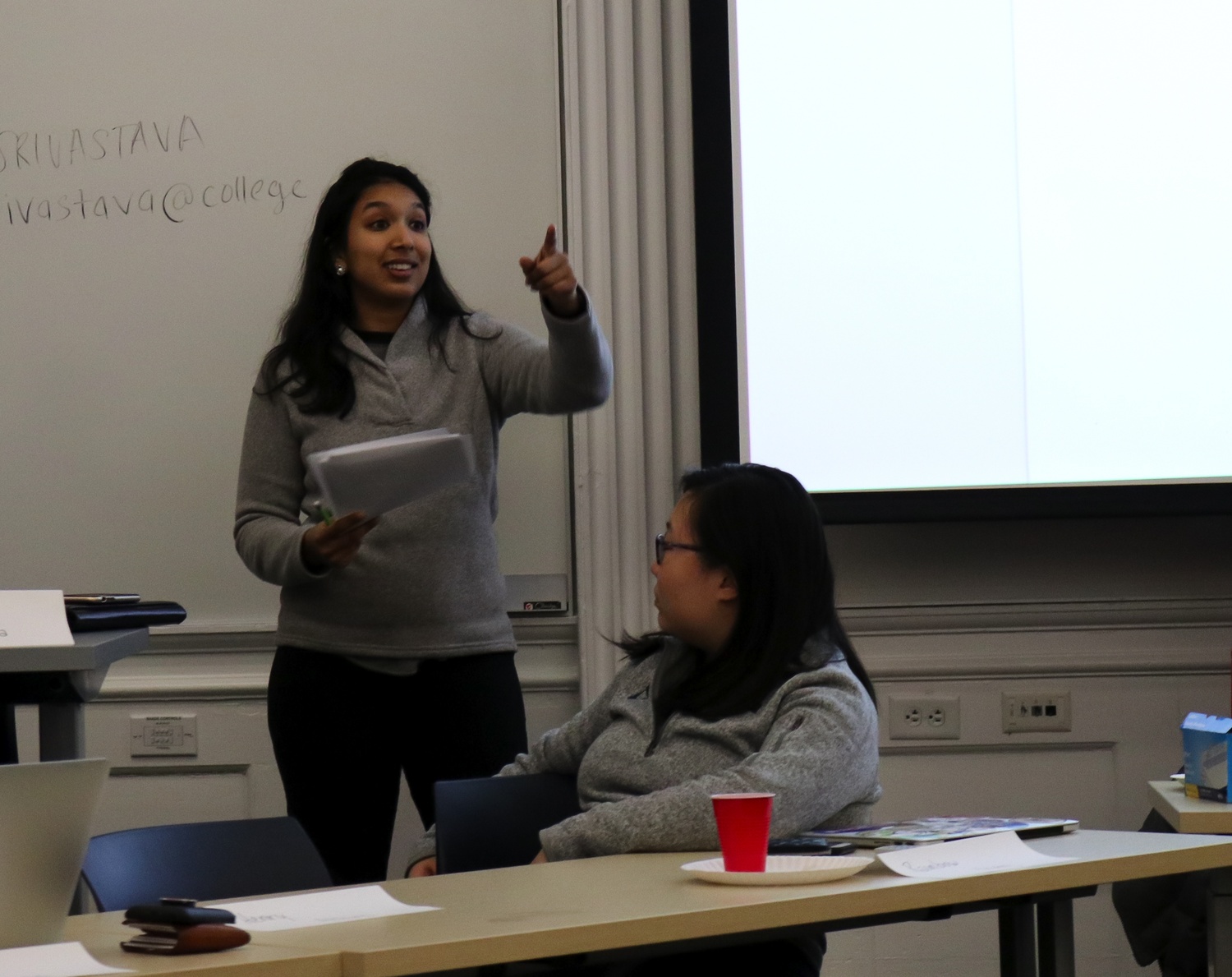 Nina Srivastava '18 speaks to the Undergraduate Council Monday night about the role of the University-wide student advisory committee in the presidential search. By Ellis J. Yeo
By Jonah S. Berger, Crimson Staff Writer

Multiple members of the Undergraduate Council alleged Harvard did not adequately take student input into account in its recently completed presidential search at a Council meeting Monday.

UC representatives raised these objections after Nina Srivastava ’18, one of three undergraduates who served on the University’s presidential search student advisory committee, presented a summary of the committee’s work. Srivastava refused to tell the UC whether newly selected University President-elect Lawrence S. Bacow met the recommendations of the student advisory group.

While representatives did not criticize the work of the student committee, many questioned whether the official presidential search committee—comprising members of the Harvard Corporation and the Board of Overseers—adequately considered students’ advice throughout the search.

At Monday’s meeting and in subsequent interviews, some Council members said they doubted whether students substantially influenced the search committee’s final choice. Many promised, though, that they would remain open-minded about Bacow.

In an interview after the meeting, UC Parliamentarian Sonya Kalara ’21 said she thinks Bacow’s insider status—he served on the Harvard Corporation and the search committee prior to being named University president—shows that Harvard did not sufficiently consider student input.

“It seems like Larry Bacow was chosen from the search committee and he’s on the Corporation which doesn’t show a lot of substantive effort in engaging with the rest of the Harvard University system,” Kalara said.

“Our gratitude goes especially to the members of the three advisory committees—of faculty, students, and staff—who worked so hard and contributed so much to informing the search committee’s deliberations, both by sharing their own views and by eliciting robust input from many others,” Lee wrote.

UC President Catherine L. Zhang ’19 wrote she was also concerned by what she called a lack of student involvement in the presidential search in an email Tuesday.

“The advisory committee did a great job of collecting student input and voices but the fact that they were not directly involved in the search and instead simply an advisory board deeply troubles me,” Zhang wrote.

“There has been a consistent lack of student voice in any decision making process and that is something that needs to change,” she added.

Quincy House Representative Sarah S. Fellman ’18 agreed. She suggested that, in the future, the search committee should include students and faculty among its members.

Srivastava said Monday that the advisory committee plans to present a final report summarizing its findings to Bacow in the coming weeks. She declined to say whether the committee’s recommendations will be released publicly.

At the meeting, Mather House Representative Eduardo A. Gonzalez ’18 said he hopes that future presidential search committees will publish summaries of student advisory committees’ recommendations. Gonzalez said he thinks publication would allow the public to directly discover how chosen candidates stack up against advice students submitted throughout the search.

Former Quincy House Representative Wyatt M. Robertson ’18 said that, though he—and others—had hoped the search committee would choose someone from an underrepresented background, he thinks students should give Bacow a chance to show his commitment to underrepresented groups on campus. He specifically cited recent efforts to establish a multicultural center as a potential barometer of Bacow’s true commitment to these groups.

“I would just love to see if he can really get behind some of these issues that I think students were hoping a more diverse president would most likely get behind,” Robertson said.

This article has been updated to reflect the following clarification:

A previous version of this article implied Wyatt M. Robertson '18 is a current Undergraduate Council representative. To clarify, he is a former representative.