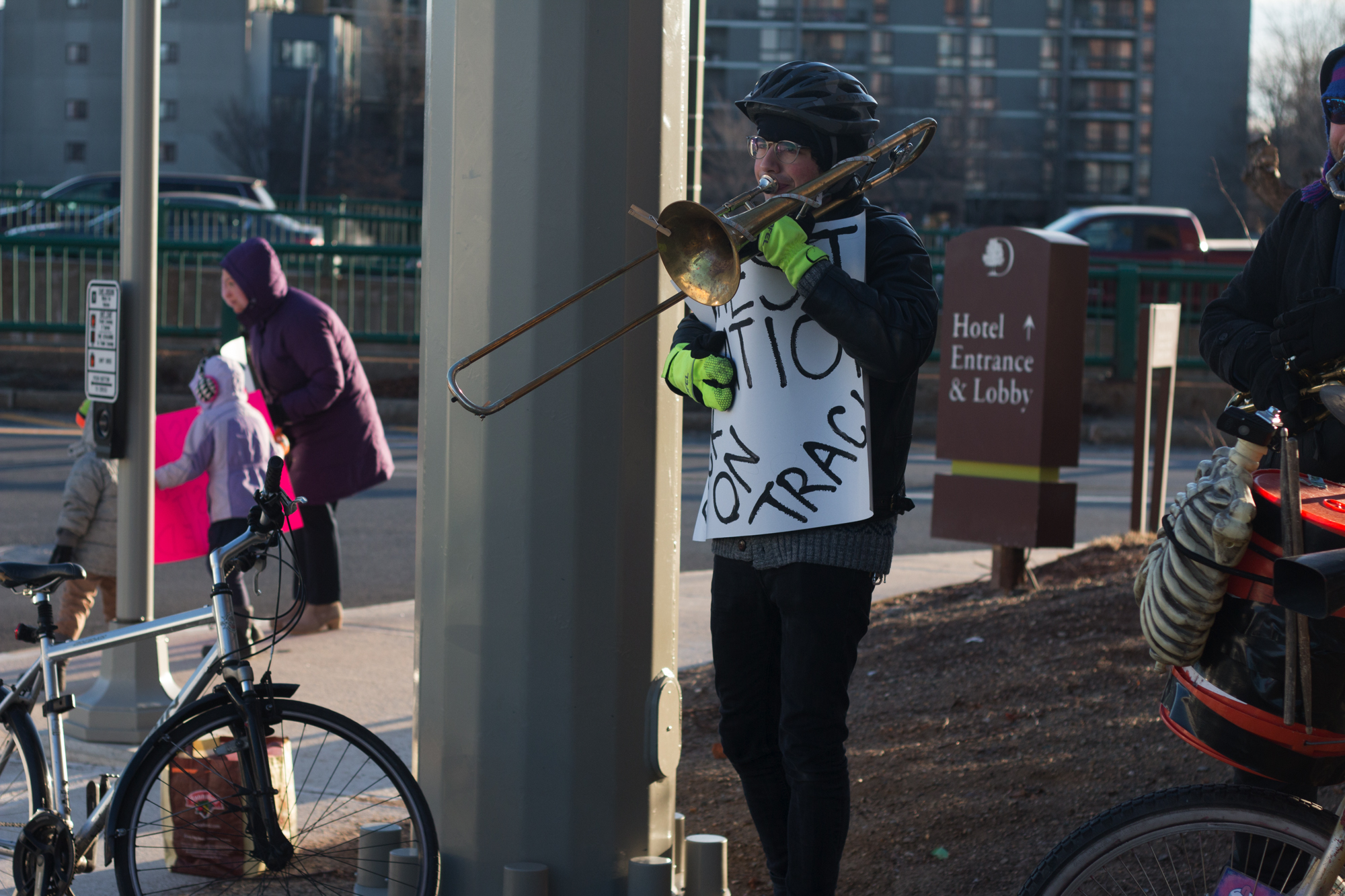 A trombonist from the Boston Area Brigade of Activists and Musicians plays at the "Transit Not Traffic" rally in Allston.
Advertisement
Advertisement

Musicians of the World, Unite!

That’s because the city’s protest scene is frequented by the Boston Area Brigade of Activist Musicians, a self-described “fire brigade of musicians” that can show up at any protest at a moment’s notice.
By Anna Kate E. Cannon

Standard protests usually include some combination of homemade posters, megaphones and other freedom-of-assembly staples. At Boston rallies, though, it’s not uncommon to find a tuba or two thrown in the mix. If the protest is big enough, it may even play host to an entire marching band, comprising drums covered in paint and rainbow duct tape, woodwinds wrapped in ribbons of all colors, and signs hanging from trombone slides.

That’s because the city’s protest scene is frequented by the Boston Area Brigade of Activist Musicians, a self-described “fire brigade of musicians” that can show up at any protest at a moment’s notice.

Their goal, according to player Catherine T. Finn–identifiable by her purple plastic trombone–is to support the people protesting. “We really put the focus on the organizers who are setting up these protests, and we really want to be of support for them,” she says. 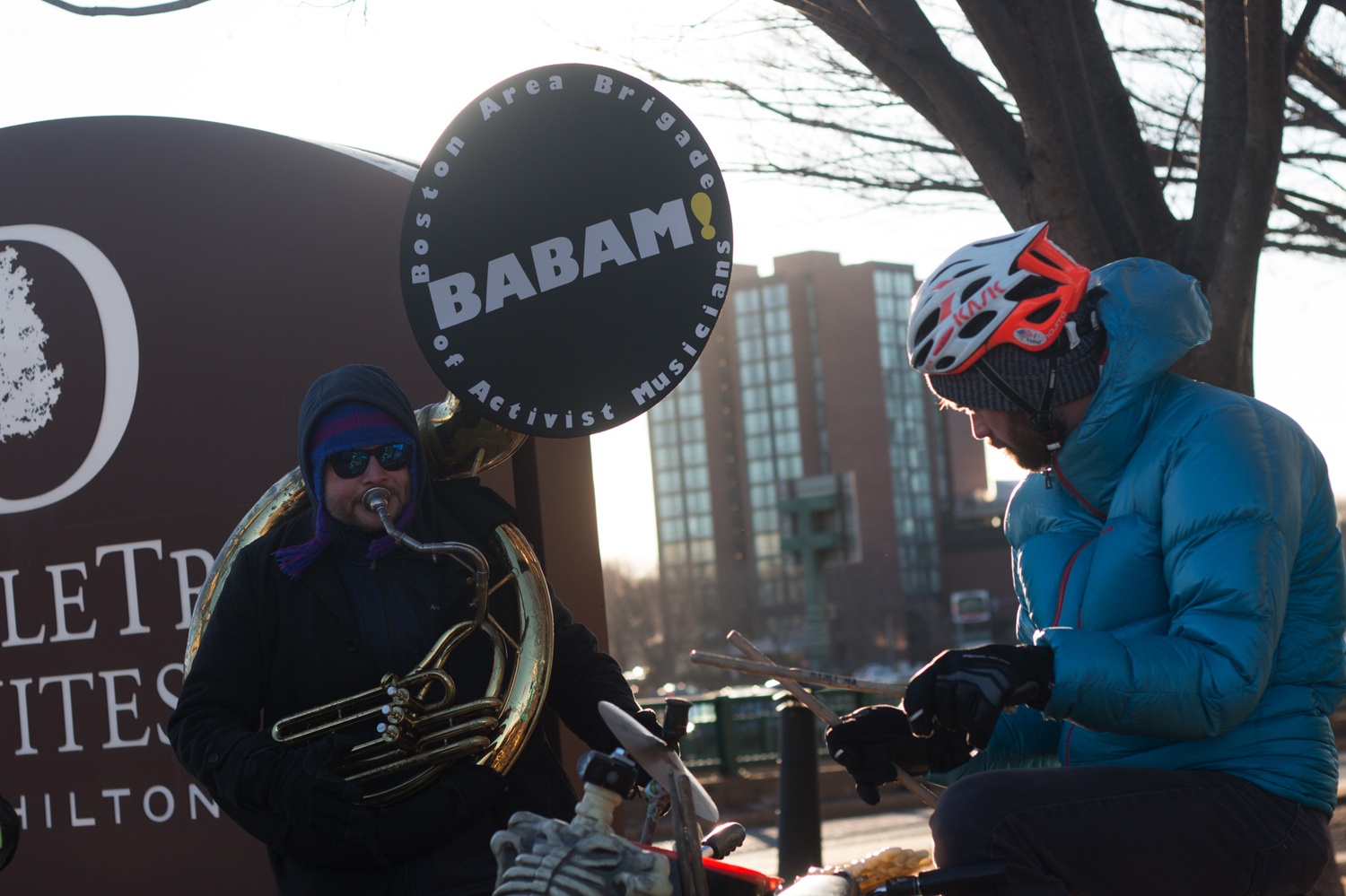 The Boston Area Brigade of Activists and Musicians plays at the "Transit Not Traffic" rally in Allston. By Caleb D. Schwartz

BABAM was founded in 2016, and arose from an already-existing Boston tradition called the HONK! Festival. The festival is a gathering of activist street bands who come to Somerville for a weekend of music and protest. BABAM’s founders wanted to create a group of musicians who could go to demonstrations at a moment’s notice, instead of just once a year; hence, BABAM was born.

Reebee Garofalo, who got his Ed.D. from Harvard in 1974, is one of BABAM’s founders. He noticed that many bands in the area play during marches, but that “it’s often very difficult for a single, self-contained band to mount enough players to make it worthwhile,” Garofalo says. “So the plan became, we’ll post a limited repertoire of songs, so everyone knows what songs to play, and whoever can show up is a band.”

The players are an eclectic mix of professional musicians and people who haven’t seriously played since high school. New musicians interested in BABAM can even learn to play at the School of HONK, a program offered through the HONK! Festival. “Anyone who wants to come can play with them,” Finn says.

As Garofalo observes, the music does more than increase the volume of an already-loud protest. “I think brass street bands have an enormous amount to offer to demonstrations,” he says. “The music always kicks the energy up a notch, and because we’re mobile and acoustic, we can play anywhere we want.”

In fact, BABAM’s style can explicitly lend itself to helping protesters amplify their dialogue. “One of the styles we’ve been developing over the years is to play songs in such a way that they lend themselves to chants,” he says. “So we will play the melody line of a song and drop out the melody instruments and leave the low brass and percussion while the organizers of the demo do one of their chants over the rhythm. So we can really augment the message in that kind of way.”

“The people there are very happy that we come,” Esslinger says. “Whether it’s two of us or 10 or 15, people seem to appreciate us.”

The group officially styles itself as “non-partisan,” but Finn also notes that “We are progressive, so the things we tend to hear from are progressive groups.” The gigs range from small union protests to large events like the March for Science. At the Women’s March last January, a sousaphone bell donned a 26-inch wide pussy hat.

Last August, BABAM performed at the counterprotest to the alt-right “Free Speech” rally that took place at the Boston Common a few days after the “Unite the Right” rally in Charlottesville. Finn says she felt particularly excited about this gig. “We’ve had a lot of positive reactions, but the best reaction we’ve had ever was when we did the counterprotest when the neo-Nazis came to town,” she says.

BABAM became the unofficial leaders of the counter protestors when they moved toward the front of the parade. By the end of the march, “it almost broke out into a street party,” she says. “Even though we had been playing for about four hours at that point, it was like there was this electric current that came through the crowd, and it was just amazing.”

These kinds of experiences keep the musicians signing up for gig after gig. According to Esslinger, “The activism, the music making, the community coming together for a common cause, supporting people and bringing attention to matters that are important, and also making people happy. That’s what BABAM is about.”