The Bulldogs handed the Crimson its first loss of the campaign on Nov. 3, and Saturday, they dealt Harvard its final defeat. 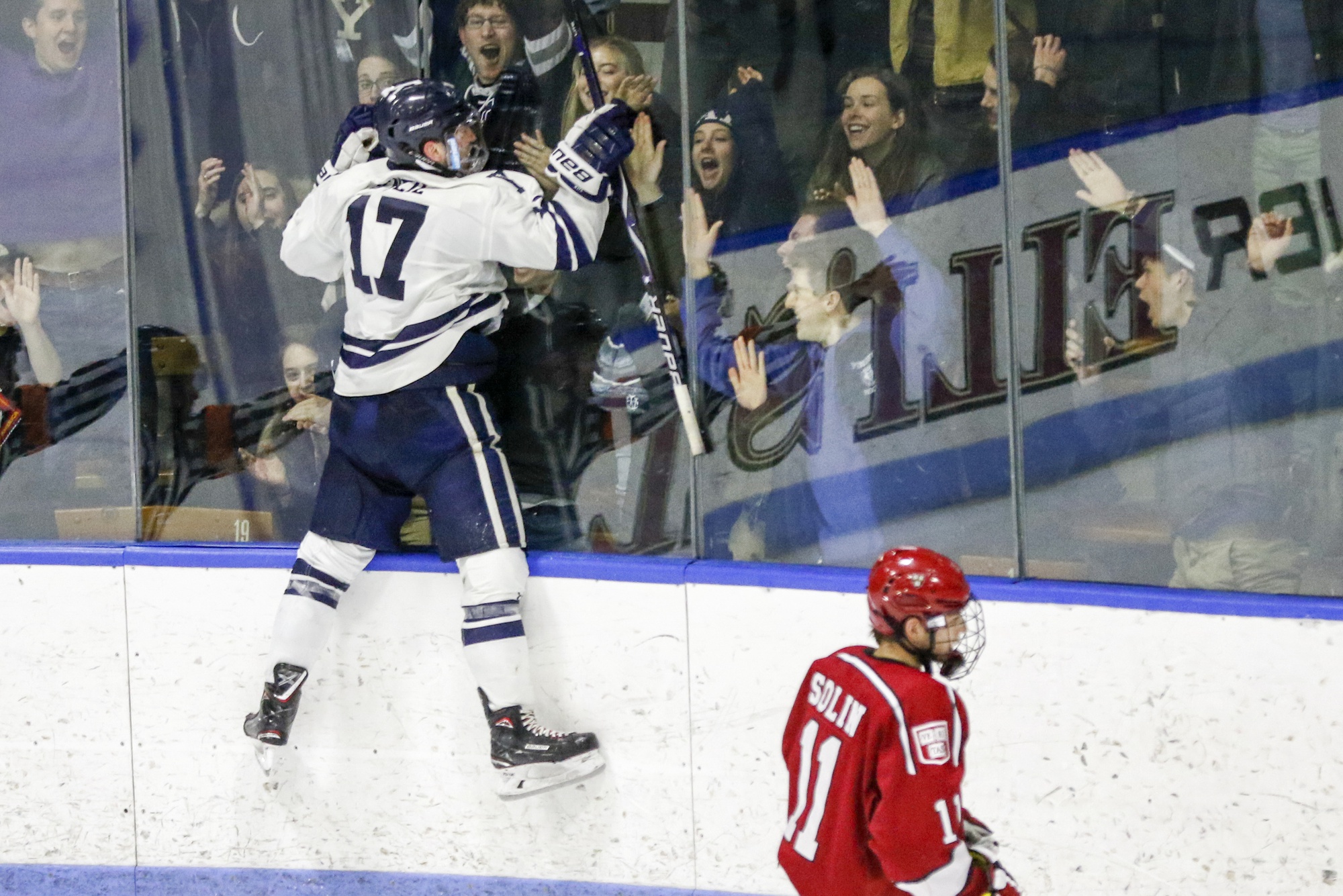 NEW HAVEN, Conn. — Harvard and Yale possess one of the oldest and most storied rivalries in all of sports. Tens of thousands of alumni from all over the world are invested in their beloved Crimson or Bulldogs and love nothing more than to see the opposition fall at the hands of their alma mater.

On Saturday night, someone quite new to this clash helped define its latest chapter. Freshman forward Kevin O’Neil potted both goals for Yale (15-13-1, 10-11-1 ECAC), powering the Elis to a 2-1 victory.

“We had plenty of opportunities in front of the net where we just seemed to not be able to find a loose puck or win a stick battle,” Harvard coach Ted Donato ’91 said. “[In] the third, we had the better of chances, they made a great individual play, and we weren’t able to get the equalizer.”

O’Neil’s second goal of the night came with just three minutes remaining in the bout, giving the Crimson (13-12-4, 11-8-3) little time to mount a comeback.

The Latham, N.Y., native stepped across the blue line with the puck, toe-dragged around Harvard rearguard Wiley Sherman, and slipped a backhander through the legs of tri-captain goaltender Merrick Madsen.

Technical difficulties with the scoreboard only intensified the Crimson’s uphill battle, as the PA announcer was the team’s sole lifeline for clock updates during most of the third period.

“It’s a little frustrating because you don’t really have a sense of the exact time of the game,” admitted coach Donato after the game. “We had a clock on the bench, and we were trying to figure it out, but we never really were accurate…. What are you going to do?” 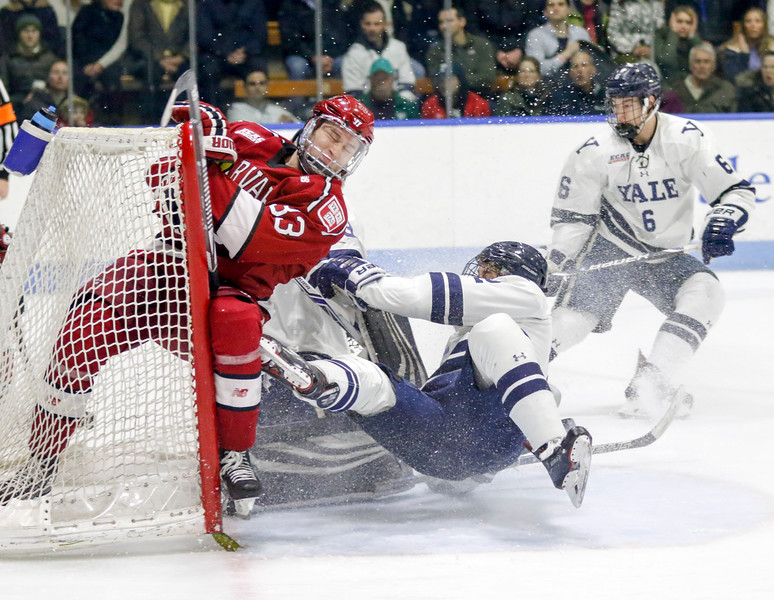 Until early in final frame, when Harvard freshman Henry Bowlby evened the score at 1-1 with a five-hole goal of his own, it looked like the contest might be decided by O’Neil’s first tally all the way back in the first period. But Bowlby’s timely equalizer breathed new life into the tilt, which had fallen into a bit of a lull after a scoreless middle third.

Following a neutral-zone faceoff the Edina, Minn., native picked up the puck and strode into the offensive zone, where he delicately threaded a shot between the wickets of Yale sophomore goaltender Corbin Kaczperski.

“He’s a gamebreaker, speed-wise,” said coach Donato of Bowlby. “He can go by you, he takes pucks to the net. He had one tonight, just missed on another one. As we head into the most important time of the season now, we’re going to need contributions from different guys, and he’s certainly been able to step up in key moments.”

Despite the dramatic third-period goals, the net-minders shined in an unusually low-scoring game between the two teams. Prior to the bout, the squads combined for 30 goals in their four most recent matchups, making a habit of turning the games into track meets. Thus, the 2-1 final ledger more closely resembled a first-period intermission report between the Harvard and Yale teams of late.

Kaczperski (33 SV, .971 SV%) made his first career start against the Crimson after entering Friday’s crucial loss to Dartmouth in relief—junior starter Sam Tucker allowed five scores on just 11 shots faced before being yanked. Getting the nod from coach Keith Allain on Saturday, the 6’3” tender did not squander the opportunity to start such a meaningful rivalry game. 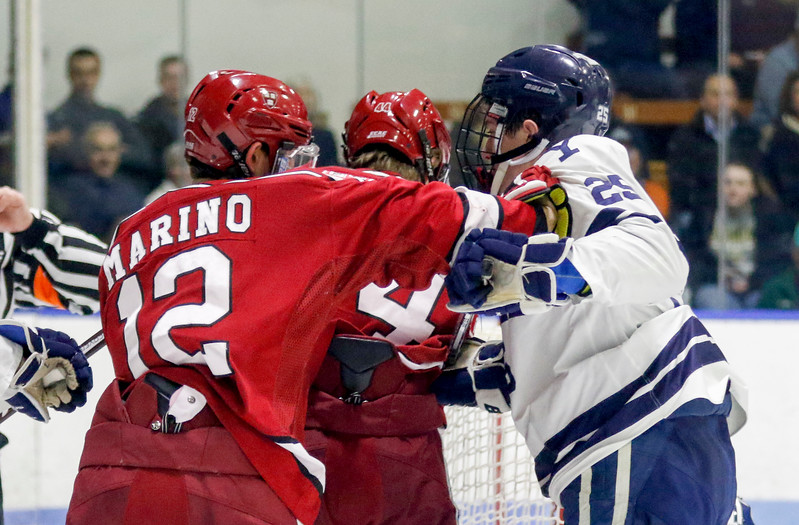 John Marino gets involved in some post-whistle shenanigans on Saturday night against Yale. By Timothy R. O'Meara

Staring all the way down the ice at Kaczperski was the Crimson’s own puck-fielder. Madsen’s performance (28 SV, .933 SV%) was not exactly shabby either.

Kaczperski particularly impressed in his successful effort to stymie a red-hot Harvard power play. The Crimson’s man advantage has been as much a boon as it has a bane at times this season. In late January, Harvard endured 17 straight fruitless attempts, but this trend quickly reversed, as coach Donato’s squad entered the tilt having notched multiple man-up goals in each of its previous four games.

At the Whale on Saturday night, though, the power play proved to be closer to the bane side of the spectrum—and in no small part due to Kaczperski’s stingy play. The Crimson sent its extra-man unit onto the ice six times, but each time the group returned to the bench empty-handed.

“[The power play] had some good chances, good looks,” said Bowlby, who did not see power play ice time on Saturday. “It just didn’t come together, and we just couldn’t finish tonight. Overall, the power play has been good lately, and hopefully that can fuel us in the playoffs.” 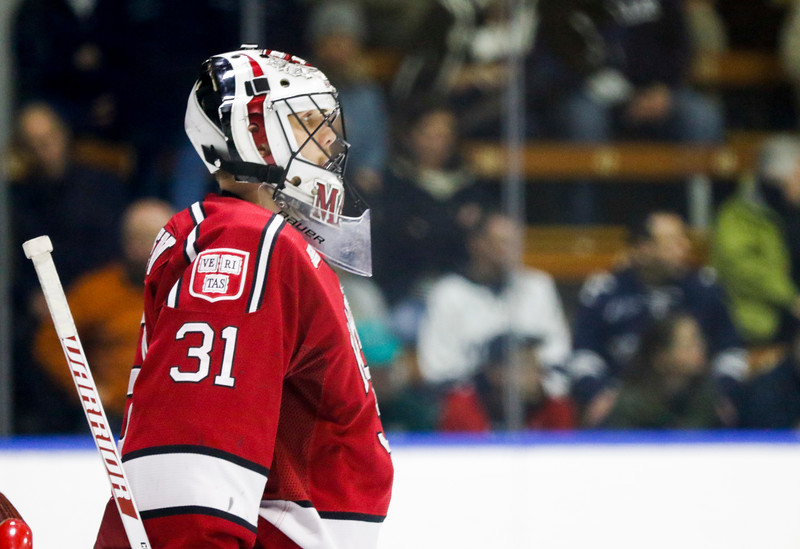 Tri-captain Merrick Madsen looks on during the regular season finale at Yale. By Timothy R. O'Meara

For the second time this season, Yale started the scoring in the rivalry matchup. Most of the first period had elapsed before O’Neil gathered his own rebound and flicked the puck over Madsen’s shoulder to find twine.

The rookie also tallied against the Crimson in the teams’ first meeting of 2017-2018. O’Neil, who has scored three of his six goals this season against Harvard, clearly knows the importance of these games and has performed accordingly.

Before O’Neil inked the scoresheet, the contest saw limited chances both ways as the teams felt each other out. After all, the two storied rivals had not faced off since the first weekend of November, and plenty has changed since then.

Back when Yale handed Harvard its first loss of the season, the Crimson sat at No. 3 in the country. Now, after suffering its final loss of the campaign to the same Bulldogs squad, Harvard enters the postseason unranked and with little to no hope of an at-large bid to the NCAA Tournament. Thus, winning the ECAC playoff title is the team’s golden ticket.

As this season has shown, circumstances do change over the course of the campaign. But the intensity of the Harvard-Yale matchup seems to be a mainstay. 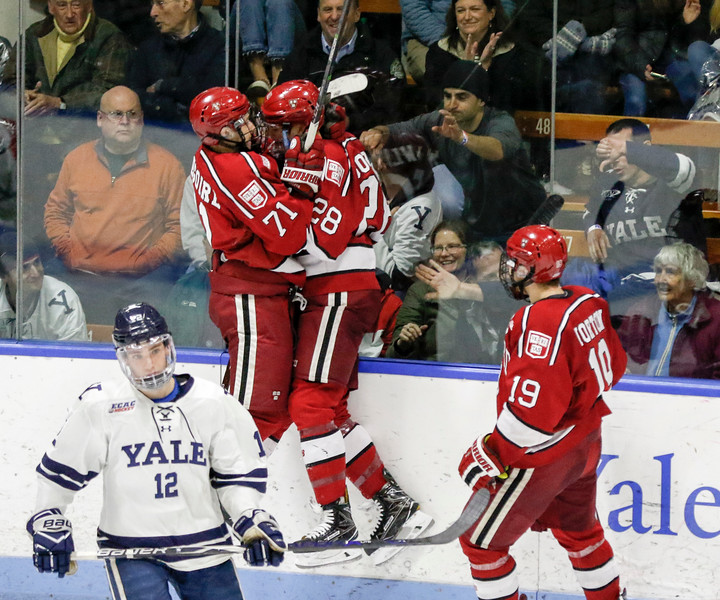 Henry Bowlby and Frédéric Grégoire celebrate after Bowlby broke the ice against Yale for the Crimson. Bowlby's goal was the lone Harvard score in the loss. By Timothy R. O'Meara

“It’s probably the biggest rivalry I’ve ever played in, [and] it’s really fun getting ready for the games,” said Bowlby, before looking ahead to future clashes with the Bulldogs. “We’re 0-2 against Yale now, so we’re definitely going to have to come out better in our next [three] years here.”

Saturday night’s loss to Yale marks the first time since the 2014-2015 season that the Crimson has suffered a regular-season sweep at the hands of the Elis.

Harvard now heads into its bye week hoping to rest its banged-up players, iron out the lines, and decide on a number-one goaltender for the playoffs.