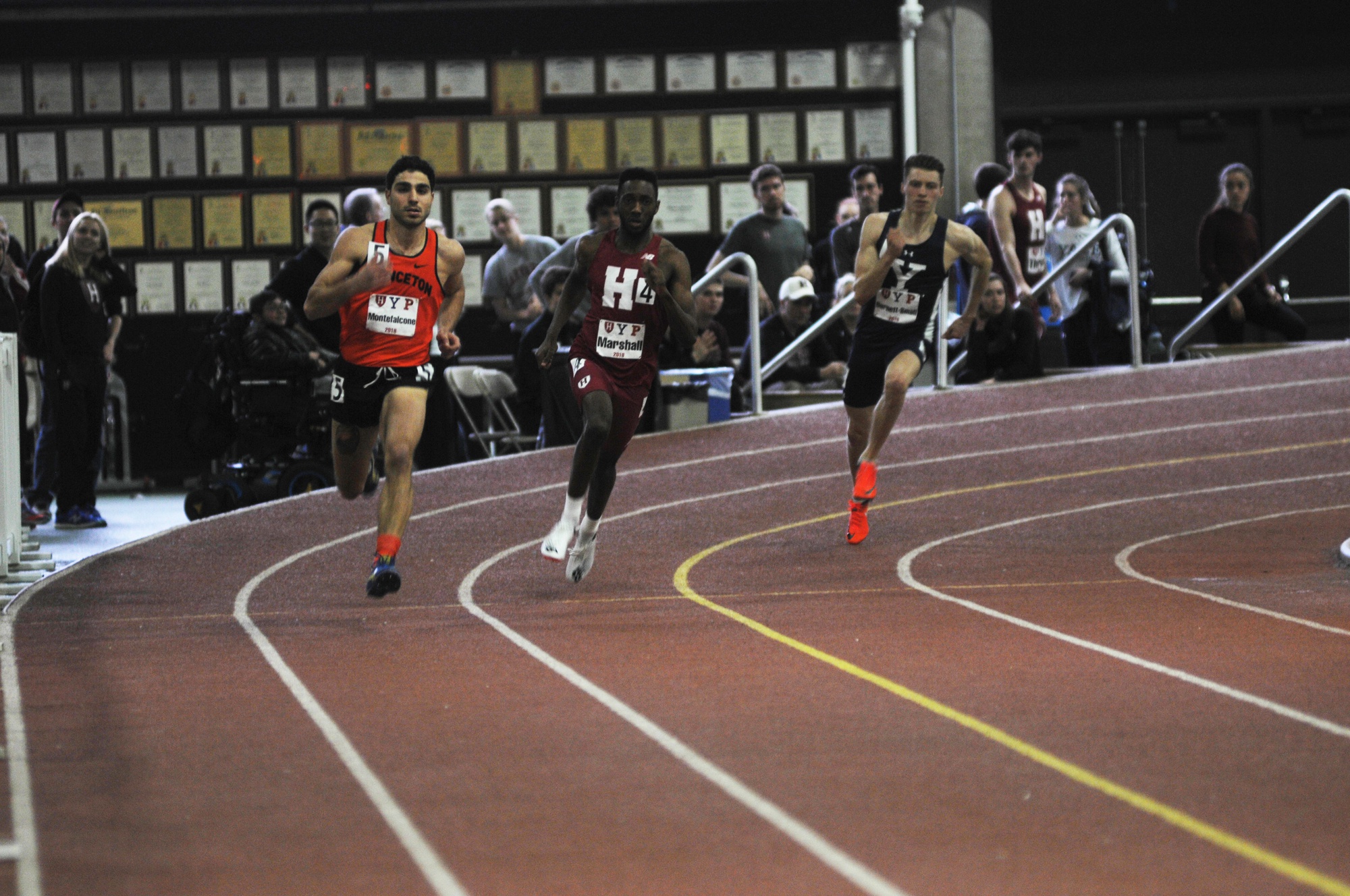 When Gabby Thomas took the baton, Harvard wasn’t even in contention for the top spot in the Ivy League Indoor Heptagonal Championships 4x400-meter relay. About two seconds behind the first place sprinter from Columbia, and still several paces behind the number two runner from Penn, the junior co-captain passed her divisional opponents in 200 meters, and maintained her lead through the finish line.

With the 3:43.85 finish, the women’s 4x400-meter quartet of sophomores Zoe Hughes and Karina Joiner, freshman Olivia Okoli, and Thomas earned the third consecutive indoor gold for the Crimson in the event, and the second relay title for the program at the meet.

On Saturday and Sunday, the Harvard track and field teams traveled to the Dartmouth Leverone Field House to compete in the Ancient Eights division championships. Over the course of the two-day affair, the Crimson left Hanover, N.H., with a second place and 105 point effort by the women’s team in addition to a sixth place finish by the men—who accumulated 51 points.

“I just think that we are a young team with a lot of upswing in the next few years, and right now we are putting in the groundwork to make sure we can have a sustainable future,” co-captain Myles Marshall said. “I think the men performed at our potential this weekend but sometimes that’s just not enough. Moving forward, I think we are primed for a great outdoor season, adding events that are in our favor and consolidating ones that we are already strong in. We have work to do but the future is looking brighter than ever.”

Both junior co-captains, Thomas and Marshall, earned Most Outstanding Track Performers as a result of their efforts during the meet. For Thomas, this was her second consecutive year to finish the day holding the certificate.

“It means a lot to be Most Outstanding Performer because I put so much into this competition and we train all season for this one day,” Thomas said. “So having all of that hard work being recognized especially as an award is always really rewarding.”

Marshall had to overcome a deficit of his own en route to claim a gold Sunday afternoon.

As the anchor leg of the men’s 4x800, Marshall grabbed the baton behind Columbia’s Alek Sauer. The junior from Harvard finally broke the lead on the final turn finishing first in 7:32.84, just .18 seconds ahead of light-blue clad anchor leg.

“That’s just a chance to show off all the hard work you’ve been putting in the past several months,” Marshall said. “I was pretty surprised to see him jump ahead of me with 200 to go but knew that If i just stuck with him I would have a decent chance to pass him in the final stretch. I was just happy to be able to execute that strategy and get our team another 10 points.”

The 4x800-meter relay of Marshall, sophomore Mike Kolor, and freshmen Ryan Thrush and John Fish was one of the two relay teams to top the podium.

“It’s a huge honor to be an Ivy champ,” Fish said. “It’s so rare to get the opportunity to run with and learn from a runner as skilled as Myles, and that’s benefited all of us on the team tremendously—us freshmen especially. I’m so glad that the hard work of our group paid off and that we were able to leave it all out there and come away with the win. It’s an experience that I’m sure I’ll remember for the rest of my life.”

That was Marshall’s second 800-meter victory of the weekend. Prior to the relays, the Texas native competed in solo event. In 1:52.19, the junior grabbed gold for the second straight year in the indoor event.

Thomas was golden in more than just her relay as well. The junior co-captain grabbed the top spot in two other sprint events. On Saturday, Thomas won her 60-meter dash heat in 7.25 seconds—shattering a school, Ivy League, and meet record in the event. The next day, she went on to claim the gold in a 7.62 finish. The first place finish represented her third straight year to accomplish the feat.

But Thomas wasn’t done. In the 200-meter dash, the senior crossed the finish in 23.26 seconds, another gold, and another three-year streak of top-spot medals—the first Ivy League sprinter to accomplish the hat-trick.

On Saturday, Thomas earned her first medal of the championships, with a silver in long jump following a leap of 5.96 meters. Sophomore teammate Simi Fajemisin landed just behind her at 5.91 meters and earned the bronze.

Fajemisin returned on Sunday, and on Sunday, Fajemisin broke the school record in triple jump. Leaping 13.11 meters, the sophomore achieved an illustrious division title. The jump landed just four centimeters short of a qualifying jump for the national meet.

While Marshall claimed the men’s 800-meter dash title, junior Kathryn Gillespie helped the Crimson sweep the event with a cool, 2:09.77 gold-medal finish in the event. The win was Harvard’s first in the women’s side of the event in five seasons.

Sophomore Zoe Hughes, the 2017 indoor champion in the pentathlon, returned to defend her title. With first place finishes in the 60-meter hurdles and shot put, the second-year left the meet with a silver medal.

In other team relays, silver was the medal of choice for the sprinters in Crimson. The men’s 4x400-meter relay team earned second place in a competitive race that had three schools finish within .04 seconds of each other. Cornell crossed the line first, followed closely by the group of senior Matt Hurst, and freshmen Rodney Agyare-May, Jovahn Williamson, and Charles Lego.

Next weekend, the team continues it’s indoor season with a short trip across the river to Boston University to compete the IC4A/ECAC Championships. The meet will serve as a last ditch effort to clock a qualifying time for the national meeting. Thomas has already punched her ticket to College Station in the 200-meter dash.

“This year was tough,” Thomas said. “We had a lot of injuries, sickness, had some girls walk off the team when we needed them, so we had to work with what we had. There were a lot of good things done this weekend—so there’s a lot to be proud of. In order to win, everything would’ve had to go perfectly, and you can’t always expect that. But everybody did compete hard and battled through some mental hardships and we came out pretty well.