Men's Hockey Gets Back On Track at Dartmouth 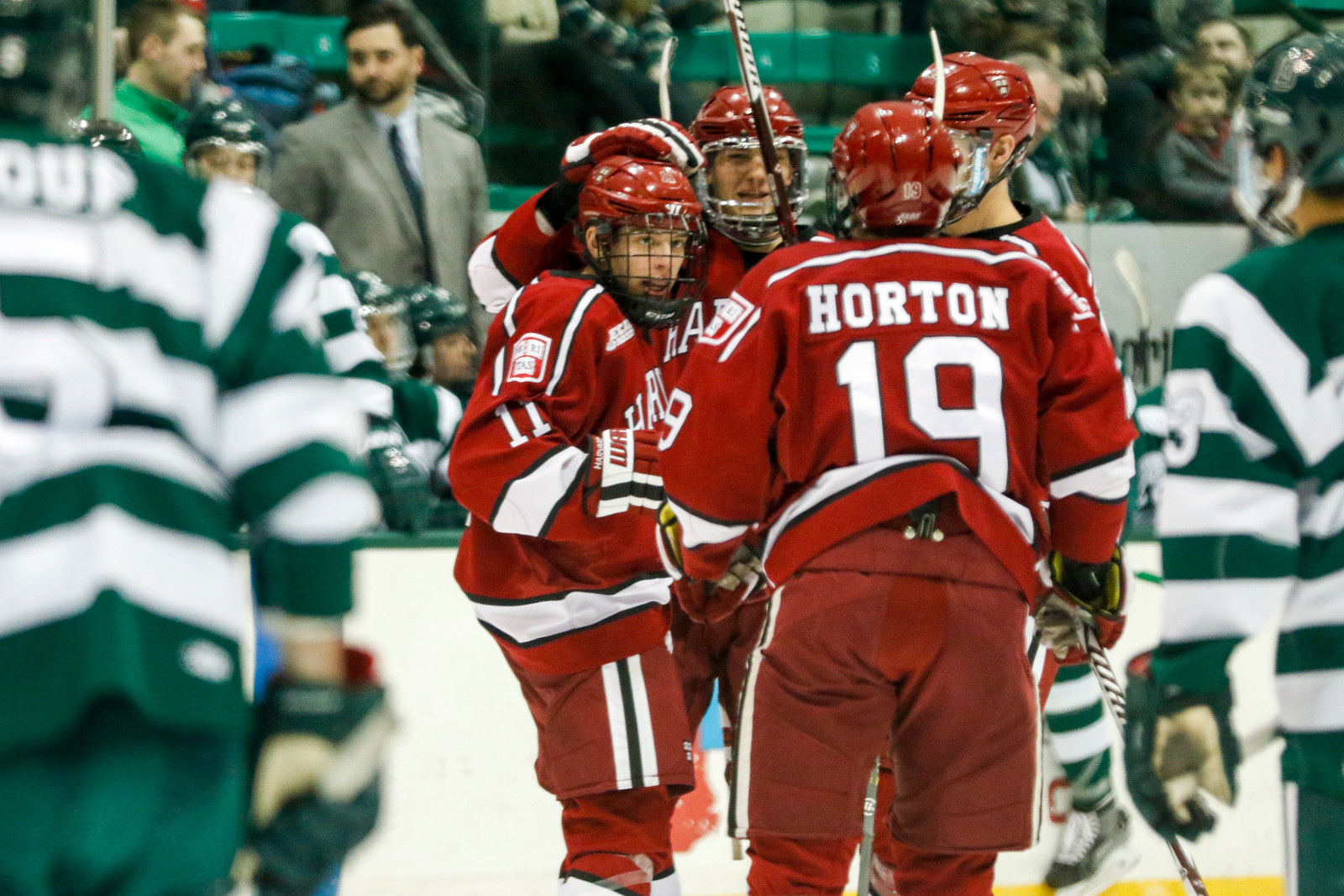 The Crimson finally broke through an opposing goaltender after running into two brick walls last weekend vs. No. 1 Cornell and Colgate. By Timothy R. O'Meara
By Stuti R. Telidevara, Crimson Staff Writer

After a tight second period, the Harvard men’s hockey team led Dartmouth, 2-1, with less than four minutes to go in regulation. With time ticking down, the game grew chippier as the Big Green pressed on in search of the tying goal.

The puck bounced around the neutral zone before junior forward Lewis Zerter-Gossage corralled it and found the tape of linemate Ryan Donato, who had drifted all alone behind the Dartmouth defense.

The precision-pass gave Donato the time and space he needed. Coming down the slot, he moved to his backhand and flipped the biscuit bar-down on senior netminder Devin Buffalo. The Scituate, Mass., native and his linemates barely celebrated the late tally, though the third goal was certainly significant.

“It was just relief,” Donato recalled. “I didn’t even have the time to celebrate. I was just like, ‘finally.’”

Friday night, the Crimson (10-8-4, 9-5-3 ECAC) skated to a 4-1 win over Dartmouth (9-12-2, 7-8-1), although relief—rather than excitement—seemed to be the tone of the triumph. After Harvard failed to score in two contests last weekend, the team’s offense began the road to recovery in Hanover, N.H.

Donato himself, the NCAA’s leading goal-scorer (21), had been operating at over a goal per game before last weekend’s goose eggs.

Of the four times the Crimson tickled the twine against the Big Green, only Donato’s was a top-line effort—another promising sign for the team, which will soon lose its scoring leader to the American Olympic squad. The bottom six made the difference in this game, going hard to the net and forcing Buffalo to make some scrambling saves. 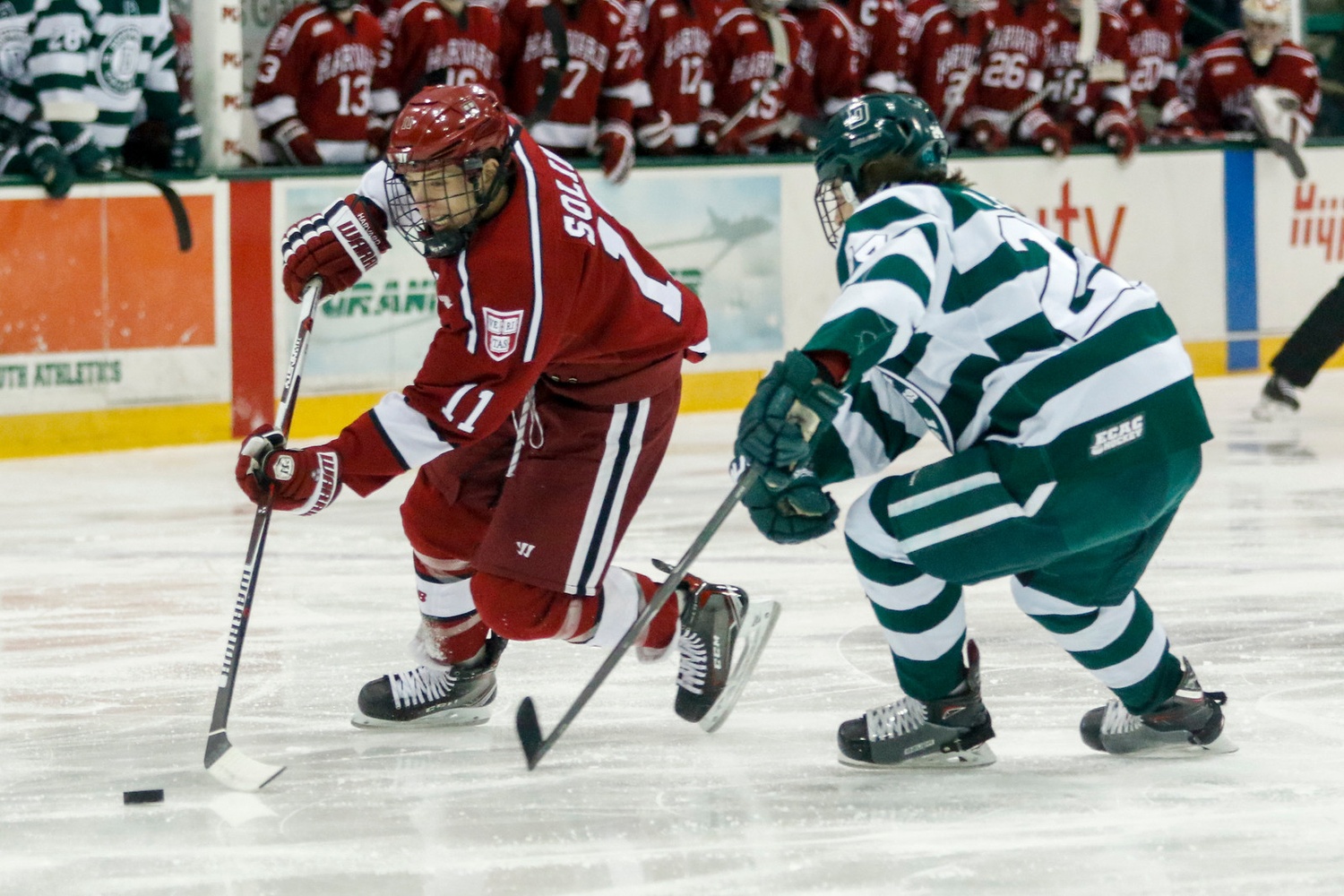 “A lot of guys are going to have to start stepping up,” freshman forward Benjamin Solin said. “[Donato] being gone is going to give a lot of opportunities [to] some other guys.”

Solin opened the scoring, deflecting a left-point shot from sophomore defenseman John Marino just 3:58 into the tilt. Though Harvard outshot Dartmouth, 19-6, in the first frame, the visitors could only build a 1-0 lead before the intermission.

“In the first, I thought their goalie played great,” said Harvard coach Ted Donato ’91. “Unfortunately, that’s been a theme for us. I thought we could’ve had three or four in the first pretty easily.”

Despite the free-flowing first frame, the game tightened up in the second, as it took more than half of the middle period for either team to strike. This time, it was the Big Green’s turn.

Rookie forward Quin Foreman carried the puck up the left wing and fired a shot that trickled through Crimson tri-captain Merrick Madsen into the blue paint. Sophomore Shane Sellar poked the loose puck home in the confusion. Though the game was closest in the middle frame, that tally would be the only goal Madsen let in all night.

“I felt solid. That’s kind of the game I’m trying to get back to,” Madsen said. “We got back into the win column, and that’s what mattered tonight.”

A few minutes after Sellar’s tying goal, a chip from Harvard sophomore forward Nathan Krusko sprang his linemates, sophomore Frédéric Grégoire and freshman Jack Badini, on a 2-on-1. Grégoire flew up the left wing and picked his corner, beating Buffalo with a far-side snipe. Harvard had regained the lead and would not relinquish it again. 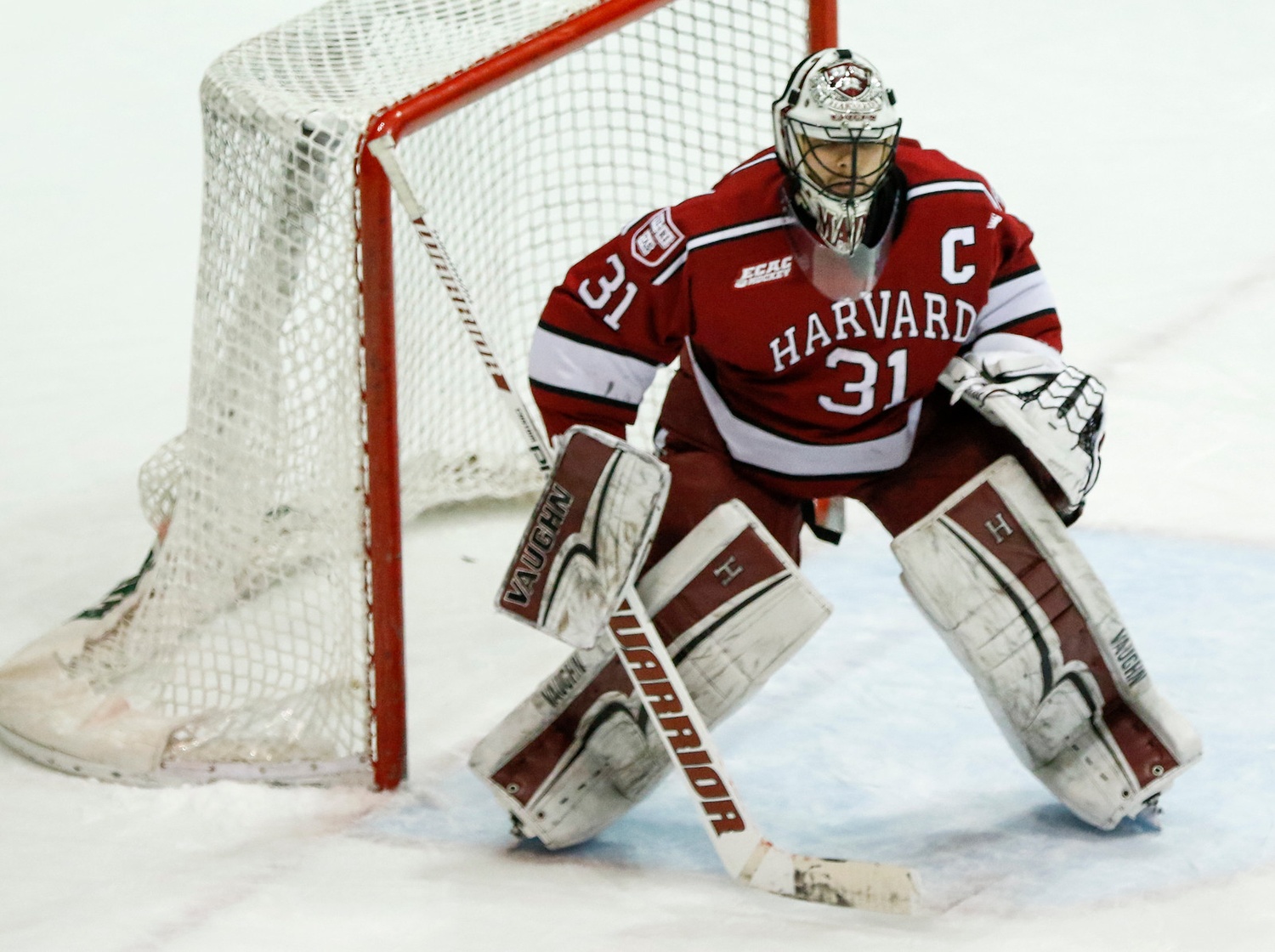 Tri-captain goaltender Merrick Madsen got the nod from coach Ted Donato '91 Friday night against Dartmouth. While junior backup Michael Lackey had been contending for Madsen's starting role, it appears, at least as of now, that the senior will start on Monday at the Beanpot. By Timothy R. O'Meara

Coach Donato shuffled the lines in advance of Friday night, reuniting last year’s top defensive duo of Sherman and Marino, both of whom had points in the game. The familiar pairings kept the Big Green in check for the most part, aside from a few 2-on-1 chances in the second frame where Madsen was able to make the stop.

A return to form for the senior netminder, who turned away 22 of 23 shots, would prove a timely boon for the Crimson as it looks ahead to Monday’s Beanpot matchup. In addition to Madsen’s solid play (.957 SV%), the team also benefited from the penalty kill, which saw a bounce-back performance on Friday evening. The man-down unit went a perfect 3-for-3 after conceding both Colgate goals in last Saturday’s 2-0 loss.

“I think it was a really solid team effort,” Madsen said. “There are some things we still want to work on, but we’re starting to get back on track.”

One of those pieces that could still use refining is Harvard’s power play. The unit is scoreless in its last 12 opportunities, going from a 27.3% execution rate in December to 9.4% in January. As the team prepares to face BU at TD Garden, the possible return of freshman forward Henry Bowlby or the Terriers’ lackluster shorthanded squad (78.2%) could provide the jump that the Crimson’s extra-man group needs.