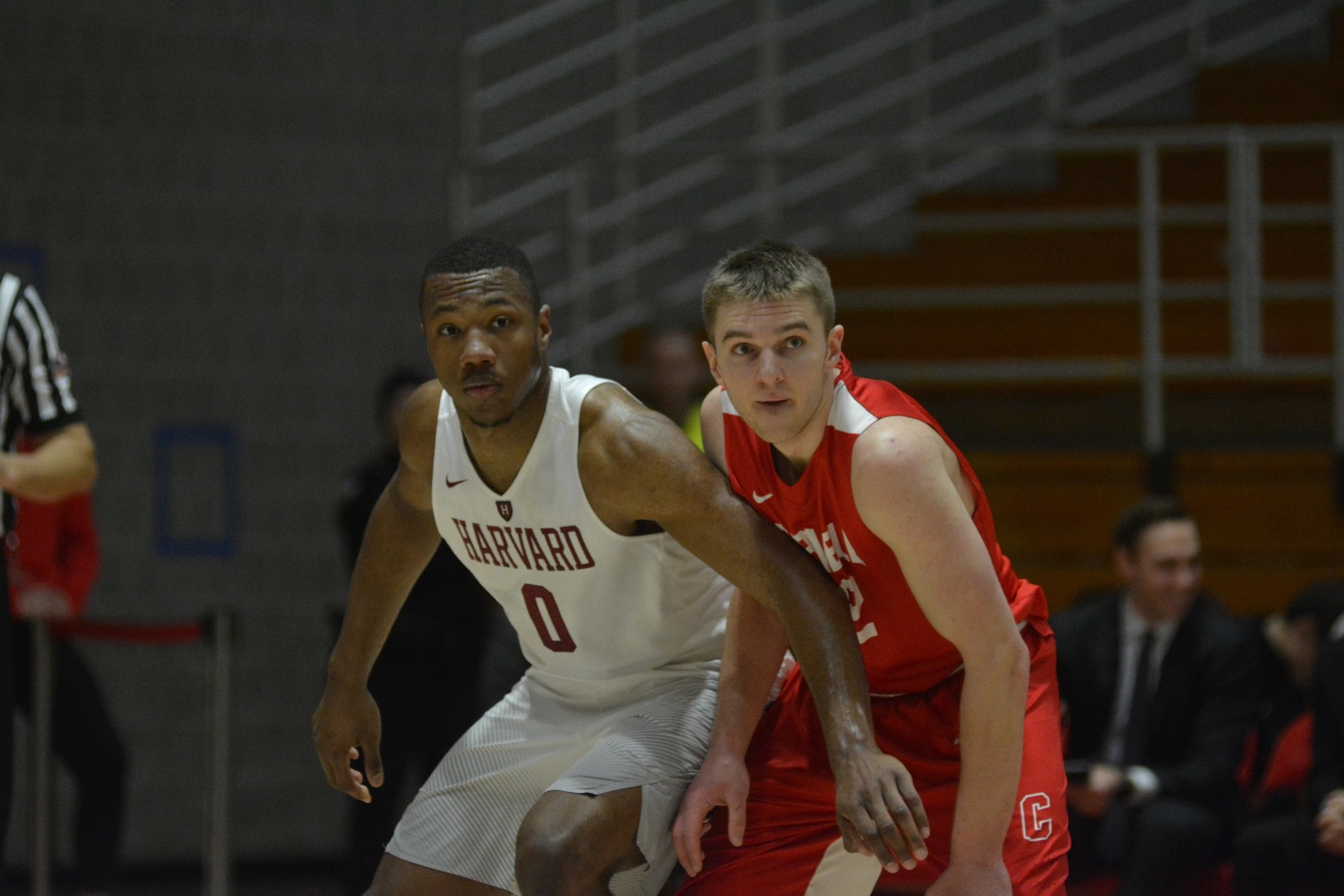 ITHACA, N.Y.—Despite holding the lead for less than nine minutes on Saturday night, the Harvard men’s basketball team narrowly edged out Cornell 76-73 to conclude its six-game road trip. A perfect 10-for-10 mark at the free throw line in the second half and balanced scoring that saw four members of the Crimson (10-11, 5-1 Ivy League) finish in double figures were critical in the tight victory.

Harvard’s backcourt, led by sophomore guards Christian Juzang and Justin Bassey, effectively contained Big Red star Matt Morgan, who finished with less than 20 total points for the first time since Jan. 13 against Princeton. However, a stellar shooting night from junior forward Stone Gettings proved to be a much larger headache for the Crimson. Gettings knocked down half of his field goals and three-point shots for a game-high 32 points.

Although Cornell (8-11, 2-4) shot inconsistently at the charity stripe in front of the home crowd —finishing the contest 10-of-18 —its leading scorer had converted on all of his free throw attempts going into the final minute of action. Down by three with 40 seconds to play, Big Red forward Josh Warren threw an overhead pass towards Gettings, who promptly attacked the rim and converted on the and-one.

Shouldered with the most critical free throw of the contest, Gettings was unable to maintain the steady hand that he had held for most of the game. The free throw clanked off the back iron, preserving a one-point Harvard lead. From there, the Crimson converted on its free throws and held on for the three-point victory.

“It’s always tough playing on the road in the league, so coming in we knew it was going to be a tough one like it was last night,” sophomore forward Seth Towns said. “Last two minutes, it was the same as it always is in crunch time. Just coming out with the W, just being in the moment and getting it done.”

Unlike its most recent Ivy League games, Harvard fell behind early and had to climb its way back into the contest before intermission. Sophomore forward Chris Lewis and freshman forward Danilo Djuricic were the sole offensive contributors in the game’s first eight minutes, combining for 12 points. Defensively, the Crimson’s perimeter defensive gaps resulted in four made threes for the Big Red, three of which came from Gettings.

Down 23-16 at the 9:30 mark of the first half, Harvard coach Tommy Amaker inserted sophomore forward Robert Baker into the lineup. The 6’11” stretch big had been sidelined since Jan. 6 at Dartmouth, but quickly shook off any rust he may have held. Baker converted on a lay-up within 20 seconds of checking in and snatched a takeaway in the paint two defensive possessions later. In nine minutes of action, the sophomore tallied four points, four rebounds, and one block.

“We were a little gassed and tired and the guys [that] came off the bench… we need all those bodies to help us and to have positive minutes,” Amaker said. “In particular Robert, a shot in the arm off the bench.”

Soon after Baker checked out of the game at the five-minute mark, a corner three from Juzang evened the game at 30. Towns, who was coming off a career-high 31 points against Columbia, provided another jolt of energy for the Crimson after a previously quiet start. The Columbus, Ohio native widened the margin to five, Harvard’s largest lead of the first half, after converting on a triple followed immediately by a deuce. Towns executed a plethora of ball-handling moves to open up shooting space, a facet of the game that he has developed extensively in his collegiate career.

Both teams shot over 45 percent in the first half and had nearly identical rebounding and assist numbers. Compared to last night’s three-point bonanza in Morningside Heights in which the Crimson attempted 37 triples, the team was more selective from deep range on Saturday night. Harvard converted 7-of-12 three pointers in the first half, and limited itself to 23 total attempts at a 47.8 percent clip.

Similar to Friday’s outing, the Crimson emerged from halftime lackadaisical on both ends of the court. The Big Red spurred a 13-6 run in the first four minutes to build a 51-46 lead. Cornell coach Brian Earl borrowed from the Columbia defensive playbook, engaging a full-court press on Amaker’s squad. Harvard handed the ball over twice in the first two minutes and struggled to adjust to the high-octane pace from the Big Red.

“It’s not like we haven’t seen [press defense] before or practiced against it, but we’ve been very tentative,” Amaker said. “I think I mentioned that last night and again tonight. We’ve just were not as aggressive going against it as we should be and we have some work to do.”

Bassey was able to break the team’s shooting slumps with a triple at the 15:33 mark, but the make was soon matched by strong interior play from several of Cornell’s bigs. Warren particularly had success inside with Lewis on the bench, outmuscling Djuricic for an easy basket at the rim, slightly missing on a layup, and drawing a shooting foul on Djuricic in consecutive possessions leading up to the frame’s second media timeout.

Despite the challenging defensive matchup, Djuricic had another impressive night coming off of Amaker’s bench. In 27 minutes, the freshman was three-of-five from deep while adding two blocks. This game marks the third straight contest in which Djuricic has converted on at least one triple.

After another scoring slump from both teams leading up to the nine-minute mark, the Crimson was re-energized by a lay-up off the left backboard from Lewis followed by a three from junior wing Corey Johnson, bringing its deficit to one point.

The ensuing minutes were largely a back-and-forth affair, with the Big Red unable to extend its lead beyond four. Harvard, down one point with three minutes remaining, took advantage of a missed bonus free throw from Morgan and regained the lead off of a Djuricic three. A minute later, Towns followed with a triple of his own from the top of the arc to extend the margin to 72-69.

“It was a big shot,” Towns said. “I had faith in it and I know my teammates did, but it was just a big shot for us. We weren’t going in those last five minutes offensively like we wanted to so just a shot like that, from anybody… I would’ve been just as enthusiastic.”

Accurate free throw shooting completed the Crimson’s successful fight back into the contest, a theme that has been prevalent throughout the season. After tonight’s win, the team’s season free throw percentage stands at 75.7 percent, second in the Ivy League behind Brown.

“I just thought that we showed great composure and were incredibly efficient down the stretch offensively,” Amaker said. “Big shots by Seth and Danillo and tremendous free throw shooting down the stretch, very, very proud of that.”