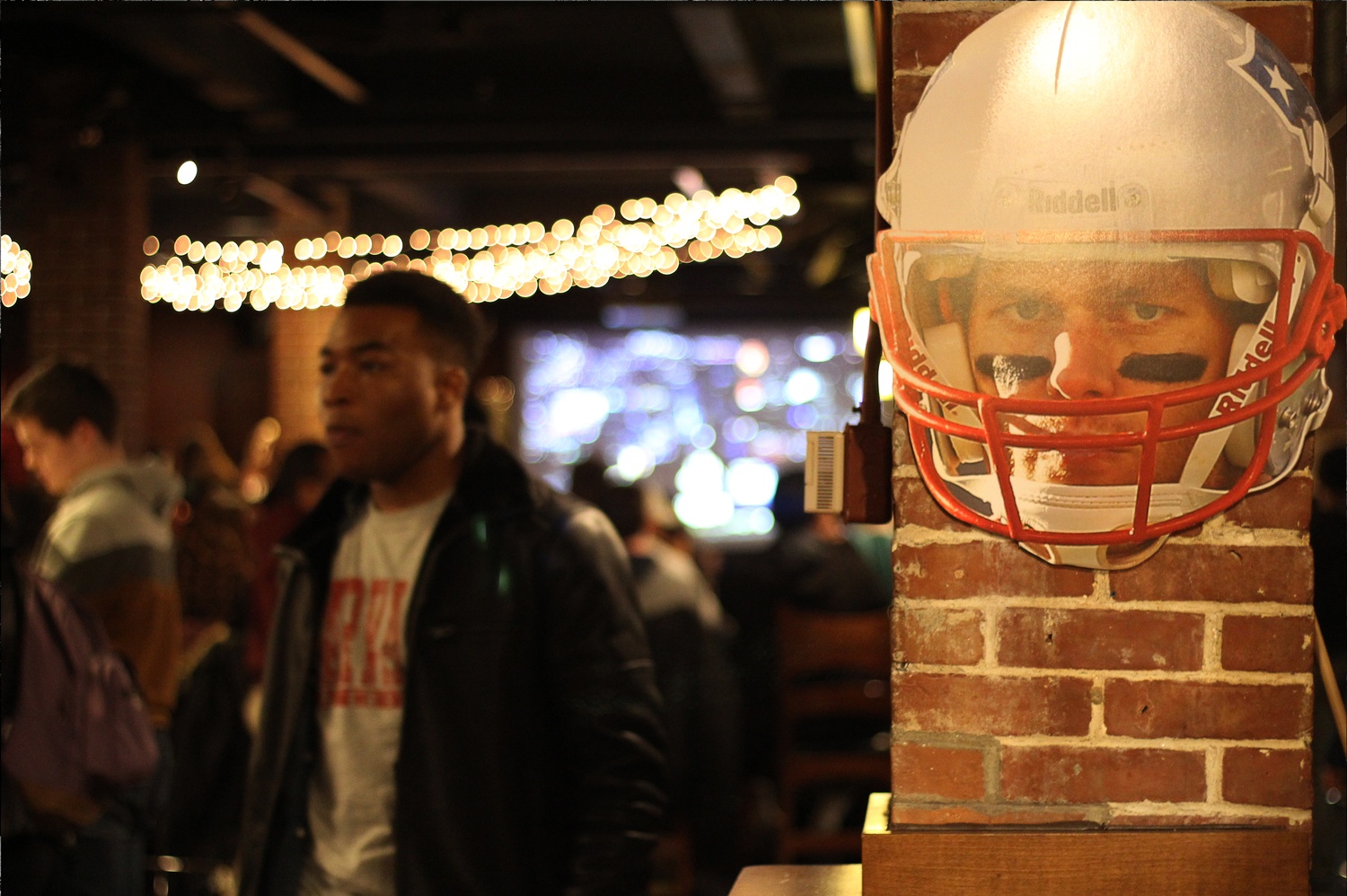 “Are you not aware you won the Super Bowl?” an onlooker asked after the clock had run out.

Seconds later, the four burst into screams and hugs in front of the television as the Eagles clinched the game 41-33.

Houses and clubs across the college hosted viewing parties for the Super Bowl, but not many were as rowdy as Pforzheimer's in the final seconds of the close game. Adams House projected the game in their dining hall, with deafening speakers drowning out the cheers of onlookers, while Quincy hosted a smaller watch party in their Junior Common Room.

A crowd of approximately 50 freshmen gathered to watch the game in the Queen’s Head Pub. A number of attendees, though, appeared to be more interested in the food than in the game, trickling out of the building early in the first half while clutching plates of chicken nuggets.

Many students and Harvard affiliates said that, while they are still fans of their hometown teams, they felt an affinity for the Patriots as Boston’s hometown team Sunday night.

Alysha L. Johnson ’14, a tutor in Quincy House, said she is a Detroit Lions fan at heart, but that she was still rooting for the Patriots.

“I’ve been here since 2010, I was an undergrad here in 2010 so I’ve become adopted by them,” Johnson said of the Patriots during the game's first half. “I like the dynasty, we’re going to keep it going, Tom Brady is going to get his sixth ring.”

Other students took a different view. Some said they were supporting the Eagles not because they had affinity for team but because they could not bring themselves to support the Patriots.

Enrique Casas Jr. ’19—who emphasized he only really supports the Chicago Bears—said he was not cheering for the Patriots because he felt their fans were obnoxious.

“I’m actually a Chicago Bears fan,” Casas said. “It’s more so just being a fan of a team that sucks here at Harvard that made me by default an Eagles fan but I think, it’s really annoying just having to constantly hear about the five Super Bowl wins.”

The few true Eagles fans made up for their diminutive numbers with spirit. As the game clock approached 30 seconds in its final countdown, Eagles supporters began a roaring cheer of “I believe that we will win.”

Martha T. Gavula ’19, a loyal Eagles fan from Philadelphia, acknowledged her team’s fans have a reputation for being rowdy. But she defended her right to celebrate, especially after the Eagles lost their star quarterback and still made it to the Super Bowl.

“We’re just the underdogs of the underdogs,” Gavula said. “ I think you can call Philadelphia what you want, but this is our year, and I’m not gonna blame people for going crazy.”

The Eagles maintained a lead for most of the game, but when the Patriots pulled ahead at the beginning of the fourth quarter, many student viewers said they felt the tide was turning in the Patriots’ favor. The Eagles came back with a touchdown and fumble recovery to win the game, leaving undergraduates across campus stunned.

As the Junior Common Room emptied, an elated Eagles fan asked his phone, “Siri, who won the super bowl?”

A number of Patriots fans declined to comment after the game.