The Crimson gave up a three-goal lead against the Golden Knights in Lake Placid, closing the book on its 2017-18 season 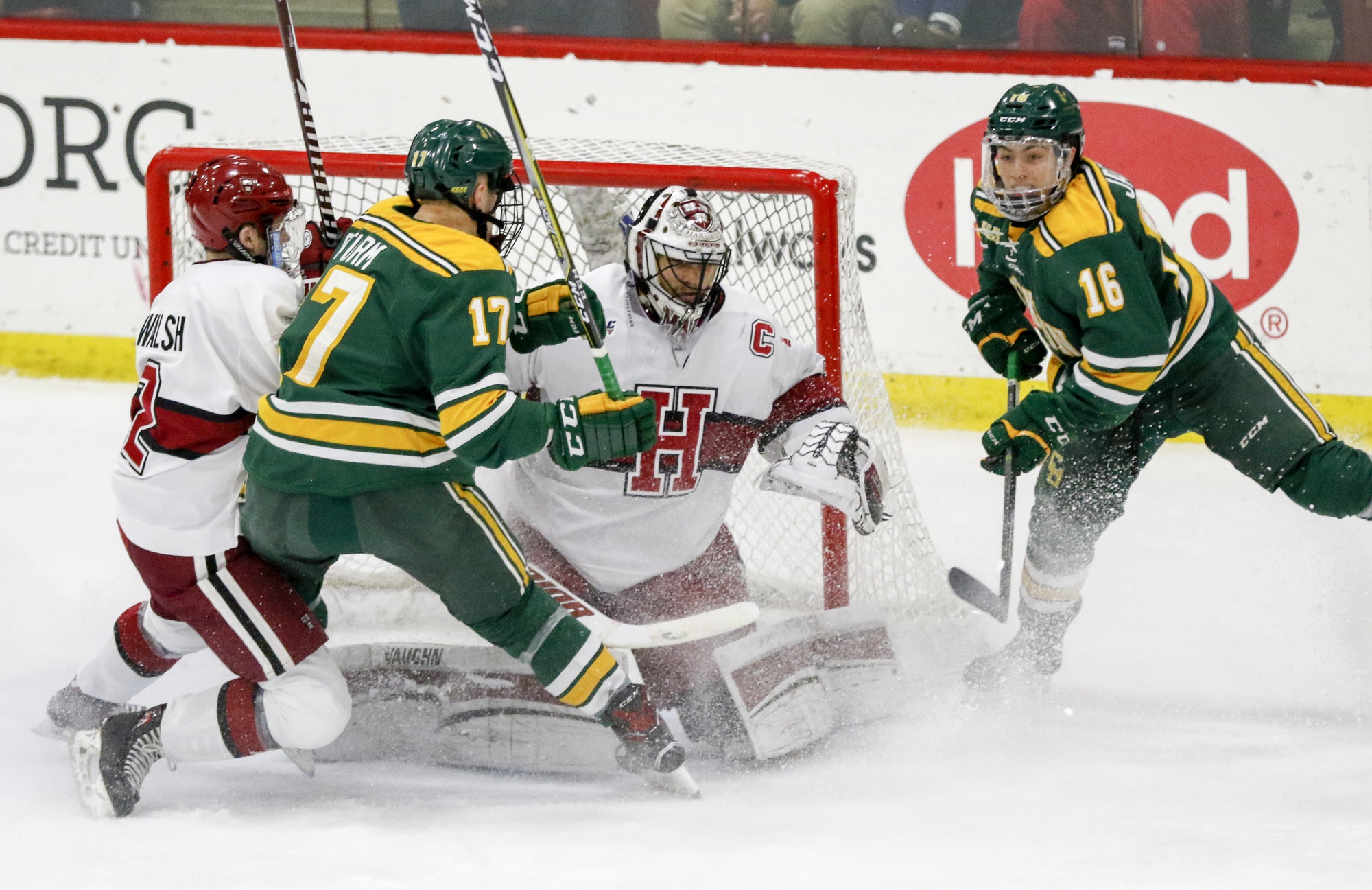 Clarkson forward Nico Sturm was responsible for both Golden Knights goals in a 5-2 Harvard win in February. Though he didn't find the back of the net himself on Friday, he set up Sheldon Rempal's OT winner.
By Stuti R. Telidevara, Crimson Staff Writer 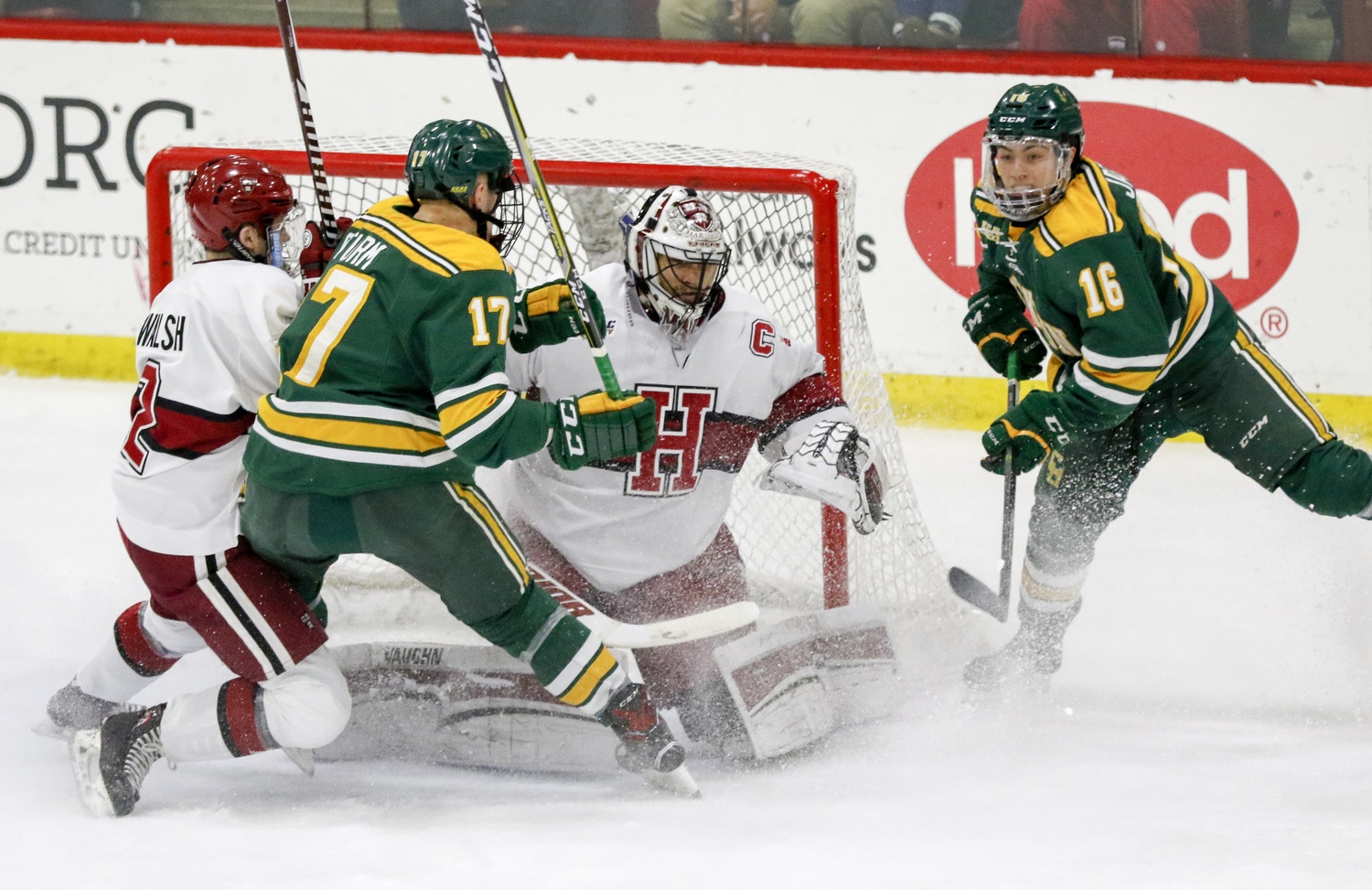 Clarkson forward Nico Sturm was responsible for both Golden Knights goals in a 5-2 Harvard win in February. Though he didn't find the back of the net himself on Friday, he set up Sheldon Rempal's OT winner. By Timothy R. O'Meara

At the historic Herb Brooks Arena in Lake Placid, N.Y., the puck had dropped on the first frame of overtime. Harvard and Clarkson were both fighting to keep their seasons alive. But as the Golden Knights pressed on, their surge proved too much for the Crimson to handle.

A perfect feed from the ECAC’s 2017-2018 Best Defensive Forward, sophomore Nico Sturm, found linemate Sheldon Rempal in the slot. Rempal, Clarkson’s leading scorer, made no mistake and found twine to cap off a dramatic comeback and end Harvard’s season all in one stroke.

The No. 10/8 Golden Knights (23-9-6, 12-5-5 ECAC) roared back from a three-goal deficit against the Crimson (15-14-4, 11-8-3), shutting the door on Harvard’s Whitelaw Cup defense. The Crimson held a comfortable 4-1 lead after potting a quick goal just six seconds into the third, but defensive setbacks and an opportunistic Clarkson offense opened the door for the opposition to force overtime. 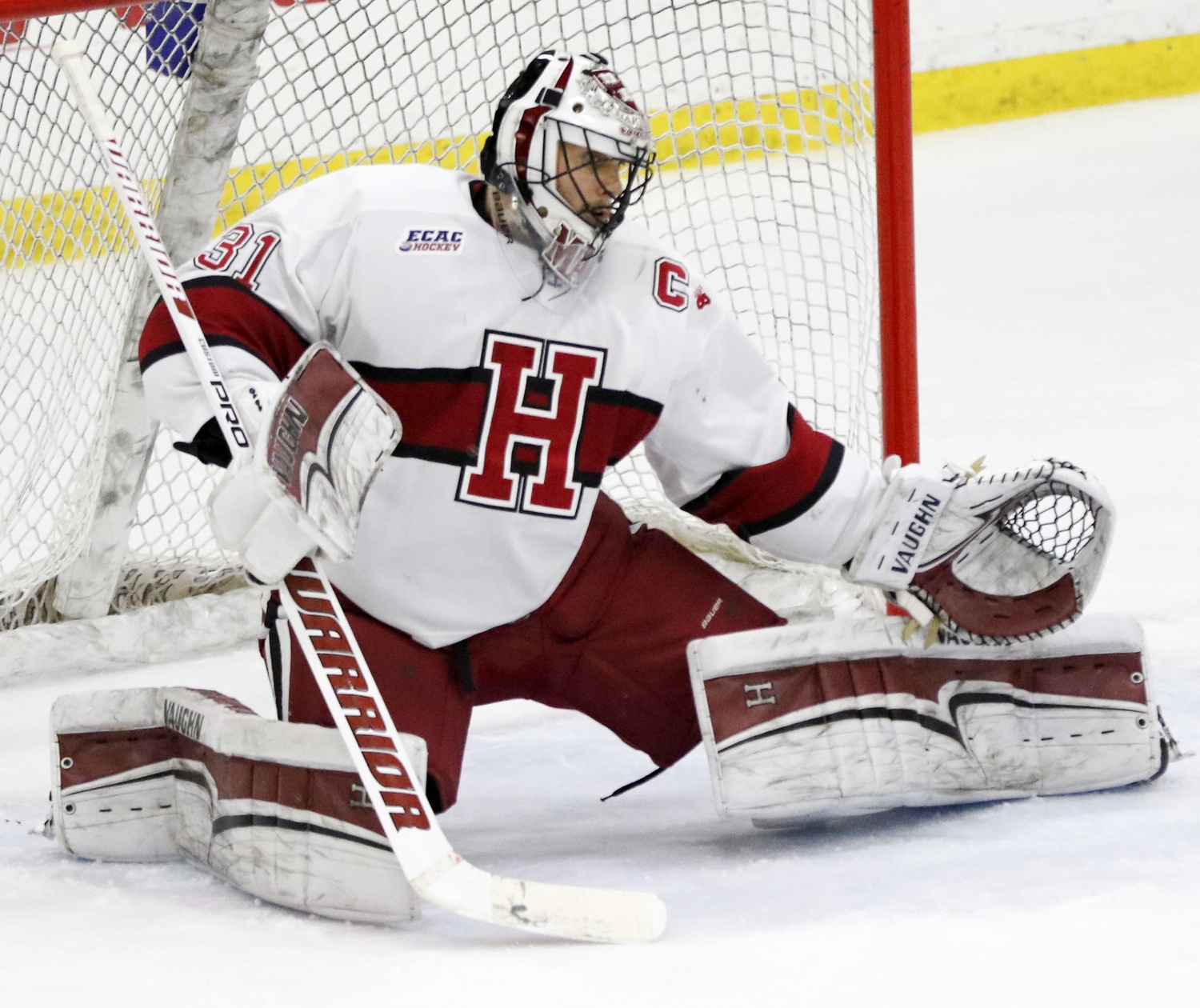 Tri-captain Merrick Madsen played a full 71 minutes and 38 seconds on Friday. His final stats (4.19 GAA, .861 SV%) take away from his performance early in the game, but conceding the OT goal means Madsen will find no redemption. By Timothy R. O'Meara

“[Clarkson] kept coming, so we give them a lot of credit,” Harvard coach Ted Donato ’91 said. “I’m real proud of [our players], they gave their heart and soul…. It’s always tough at the end, but I’m very proud of our guys.”

The Crimson began the game looking confident, anchored by the solid play of tri-captain goalie Merrick Madsen. The backstop staved off 23 of the Golden Knights’ 24 shots through 40 minutes of play, appearing at ease as he stared down Clarkson’s quality chances. At the other end, Harvard’s power play was clicking as well as it had all season. The first two Crimson tallies both came with the man advantage.

Just past the halfway mark in the first period, sophomore forward Ty Pelton-Byce found the tape of rookie defenseman Reilly Walsh, who was positioned at the top of the right circle. Walsh’s one-timer zipped right past sophomore net-minder Jake Kielly a mere 20 seconds into the power play opportunity, and Harvard carried that 1-0 lead into the first intermission.

On Harvard’s next man-advantage chance, it was junior forward Lewis Zerter-Gossage who struck gold. Five minutes into the second, Zerter-Gossage collected a pass from sophomore blue-liner Adam Fox and beat Kielly at an impossible angle to the right of the goaltender. The junior’s 10th of the season put the Crimson up 2-0. 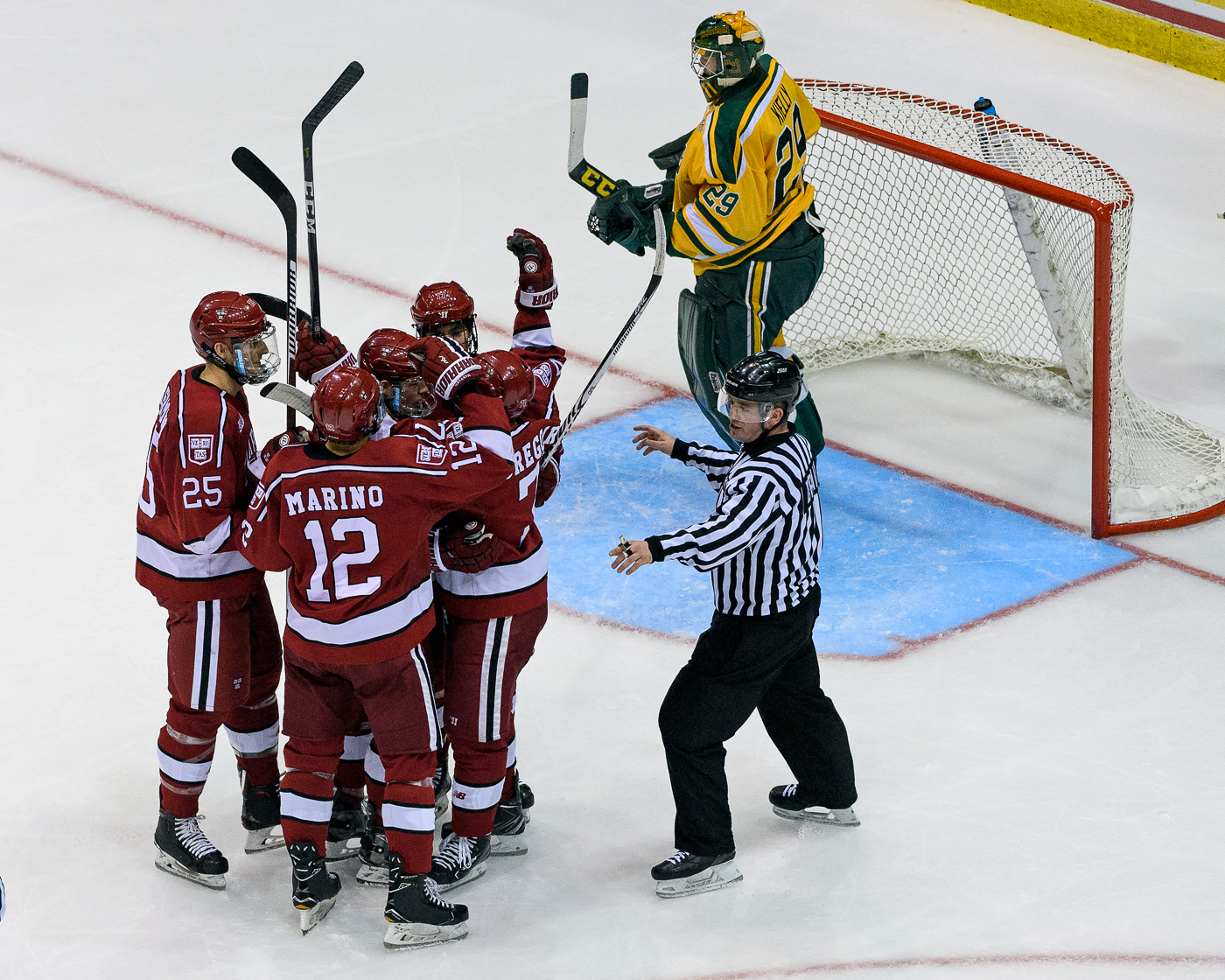 Though the teams traded chances for the early part of the game, the Crimson found a way to capitalize on Clarkson's errors to jump out to an early 3-0 lead. By Courtesy of John DiGiacomo / ECAC Hockey
Advertisement

Soon after, junior Ryan Donato split the defense and tossed the puck on net. Ty Pelton-Byce, his sophomore linemate, picked up the rebound, and the biscuit slipped out of Kielly’s reach and into his net. Only a power play goal from Clarkson freshman forward Jack Jacome marred Harvard’s solid 40 minutes.

“We were playing pretty good hockey [even] when we were down,” said Clarkson head coach Casey Jones. “For me, it was a gutsy and a character win for us tonight.”

The real drama started when, a few seconds into the third, Golden Knights defenseman Kelly Summers misplayed the puck off a faceoff win, turning it over to Pelton-Byce. The sophomore capitalized fast with a high backhand, ostensibly putting the Crimson in prime position for success. Closing the game out, however, would prove difficult.

A drive from Clarkson sophomore Haralds Egle brought the Golden Knights back within two scores just seven seconds after Pelton-Byce’s tally, marking the beginning of the period-long Clarkson surge and reestablishing the back-and-forth nature of the two teams’ regular season series.

“We persevered [after the fourth goal],” Jones said. “It was a great shift after that to get us to 4-2.”

The next four minutes saw two more Golden Knights goals, courtesy of captain Nic Pierog and sophomore Devin Brosseau. These strikes in rapid succession were not unlike the three Clarkson notches in all of six minutes during the teams’ tilt back in January. 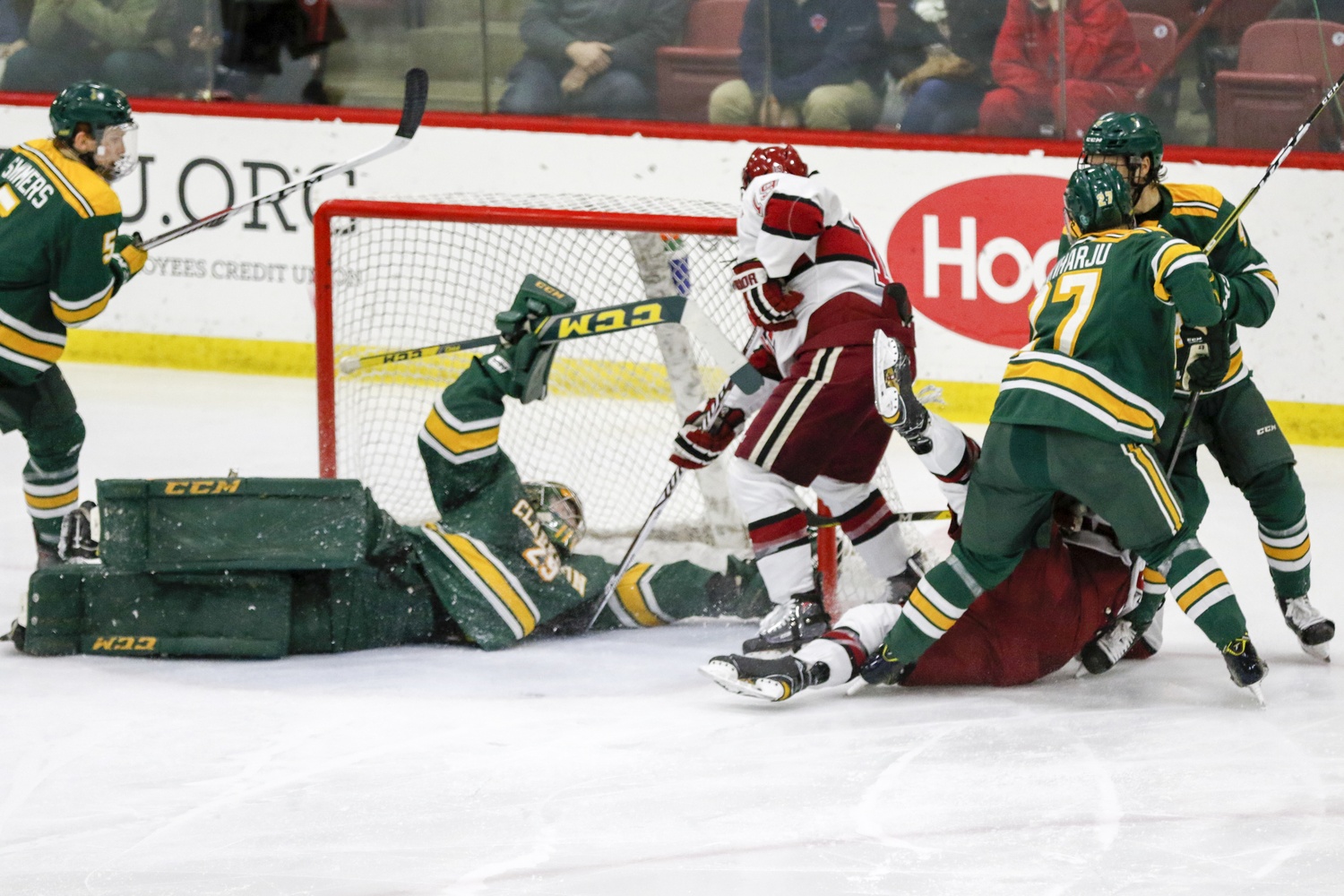 Jake Kielly conceded 12 goals to the Crimson in three matchups this year, but came away with the win that mattered as Clarkson moves on to the ECAC final. By Timothy R. O'Meara

Where Friday’s tilt differed from the 6-6 draw was that Harvard never got one back. Though the teams traded zone time for the rest of the game, the Crimson failed to capitalize on any of its chances, from one-on-one looks to cycle plays. These missed opportunities will undoubtedly weigh heavy on the players’ minds this offseason and beyond.

“Every single day of practice, workouts—it all matters,” said tri-captain Eddie Ellis when asked about what the younger players could take away from the game and the season. “[I’d tell them] not to take a second of it for granted.”

The stinging defeat also means Harvard must say bittersweet goodbyes to its senior class. The fourth-years will graduate as one of the most successful groups in program history with 82 wins, and tri-captain Jake Horton finishes his collegiate career with 140 games in a Crimson uniform, good for the program record for most games played. Madsen, too, will leave an impact on Harvard’s record books (87 career GS, 2.12 GAA, .924 SV%).

“The seniors had four trips to Lake Placid, three trips to the NCAA [tournament],” coach Donato said. “It hurts a lot right now, but they can certainly hold their heads high…. The guys have created a culture and set the bar pretty high.” 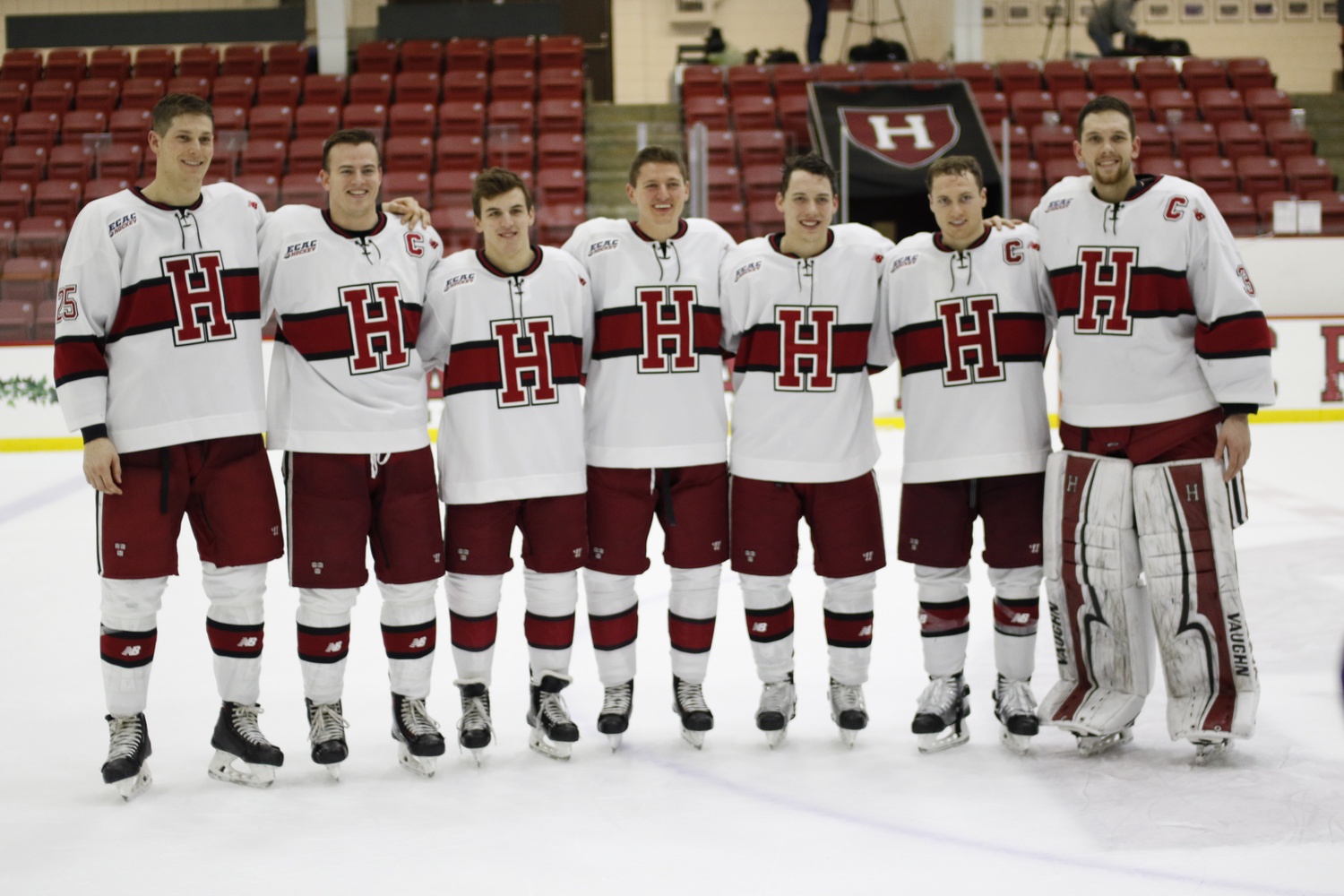 Harvard's senior class leaves behind 82 wins and marks on both the record book and the program culture. By Timothy R. O'Meara

Amid the seniors’ departure and the rookies’ growth, the ECAC semifinal loss also caps off a standout campaign from Ryan Donato, who logged two assists in the game. The recently-named ECAC Player of the Year accrued the accolades in the best year of his career (29 GP, 26–17—43), having sported the red, white, and blue in the Olympics and been named a Hobey Baker finalist.

In the coming days, Donato must choose to either contribute to the senior-based exodus and join the National Hockey League’s Boston Bruins or to return to his father’s bench for his senior season at Harvard. No matter his decision, coach Donato showed some optimism about the future of the program after Friday night’s bout.

“We needed to grow a lot throughout the year,” the bench boss said. “We have a lot of young guys…. We had a lot of growing pains, but...we feel that the future is bright.”

Harvard certainly had big shoes to fill after its storybook 2016-17 season, and this year was perhaps a more turbulent ride than the team would have liked. It is only fitting that in such an up-and-down year, an ECAC semifinal contest full of its own ups and downs ultimately determined the team’s fate.

All the Crimson can do now is bid farewell to the class of 2018, nominate its leadership corps for next season, and start the road back to achieving some of the milestones that it left on the table this year.