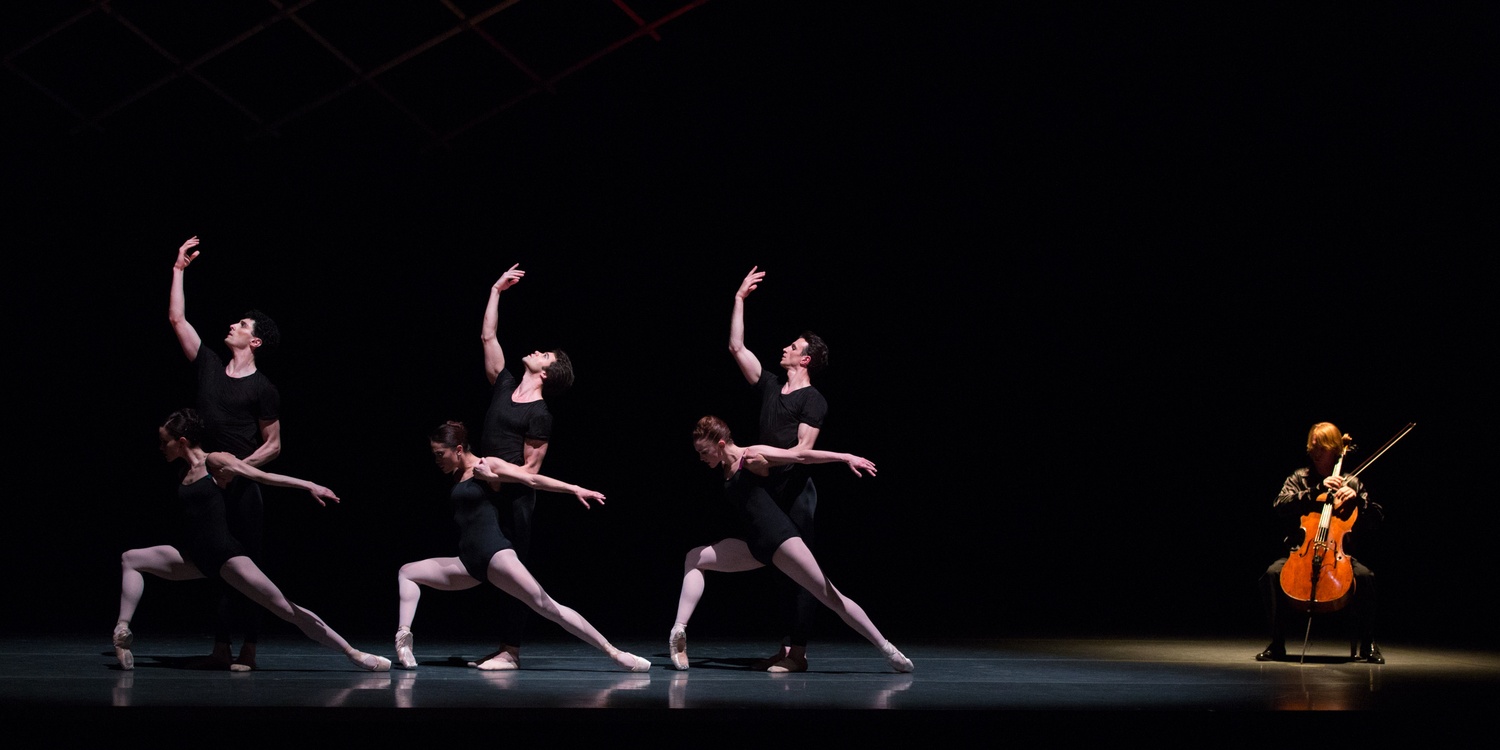 The Boston Opera House’s new show “Parts In Suite,” which is showing at the Boston Opera until Apr. 7, demonstrates exactly what a treasure the company is: A group of extremely talented dancers who capture attention and perform technically challenging pieces while synthesizing many different styles of ballet and contrasting music. Their new show for the spring season, “Parts in Suite,” is composed of three very different pieces: “Bach Cello Suites” by Jorma Elo, “In Creases” by Justin Peck, and “Pas/Parts 2018” by William Forsythe. Though the themes and styles of the pieces do not coincide in theme, it is the vast differences which make the show so captivating.

“Bach Cello Suites” begins with cellist Sergey Antonov seated on stage. He is on the side in black with a spotlight shining brightly. After several measures of Bach’s music, other dancers join him. There are four women and four men in black who partner off into pairs, dancing together in formations comprised of lines and diagonals. The choreography is filled with suspended lifts coupled with twirls and arabesques. Though the music was written centuries ago, it is almost as if it were designed with the dancing in mind. When the dancers drag their partners across the floor, they swiftly spin them back up so that all levels are used. Over the course of the performance, dancers dip in and out, leaving some to duets and others to solos. The piece is characterized by canons that revisit earlier motifs weaved in throughout the dance.

While female and male dancers all evoke the necessary amount of turbulent emotion and demonstrate the technical skill needed for this piece, Misa Kuranaga stands out with her soft, sinusoidal movements, every single part performed with such purpose that it seems that her very steps symbolize the notes of the song. Antonov is likewise worthy of additional praise, playing with great feeling and control so that he doesn’t overpower the dancers, but makes the music feel just as important. Above them hangs a bamboo installation that looks like a hashtag. It slowly descends over the course of piece as if to entrap the dancers. While the purpose of this is not clear, it does not detract from the wonderful dancing and music.

Peck’s piece also sizzles. It features live music by pianists Alex Foaksman and Freda Locker, who are seated at a double-ended piano playing from the first and third movements of Philip Glass’s melancholy “Four Movements for Two Pianos.” This music is filled with so many back and forths that it sometimes sounds like a dialogue. The stage remains largely bare as before, while the white light remains soft. The dance features four male and four female dancers again, this time dressed in white. Peck’s choreography is marked with antithesis, full of pushing and pulling. Rather than forming pairs, the dancers form groups of three and four often with one person leading the others. There are fewer canons in this piece than in the one before. These are replaced with more synchronization, which the dancers execute marvelously. The piece is also saturated with jumps. Those performed by dancer Irlan Silva are particularly light, high, and graceful. A lovely performance overall, which delivers its promise of exploring the tension between unison and counterpoint.

For Forsythe’s multipart suite, the stage is given a white background which makes the performers stand out. It features six female and seven male dancers, several of whom have been in the previous dances. The costumes are again simple unitards and tights, but this time include bright jewel-tone colors. The soundtrack features an unlikely mixture of synths, rewinded Latin music and jungle noises, electronic beats, and augmented Mongolian throat-singing that doesn’t entirely match the dancing.

The choreography is less organized, dancers flitting across stage to cover 20 different small parts covering anything from solos to groups of six. Each part is performed with a strong attitude and fierceness. The dancing is filled with contortions. It focuses on contractions and rolling hips. Though the pieces are disconnected, they accumulate movements from other parts such that the dance feels like a literalization of thoughts, following the way half-formed thoughts merge to become a new idea entirely. This repetition is not only clever, but engaging. Chyrstyn Fentroy and Paulo Arrais particularly shine, dancing with a charisma and energy that completely internalizes the beat of the esoteric soundtrack.

“Parts in Suite” is a delightful start to the Boston Ballet’s spring season. While the choreography is in itself engaging, the performances are delivered almost flawlessly.