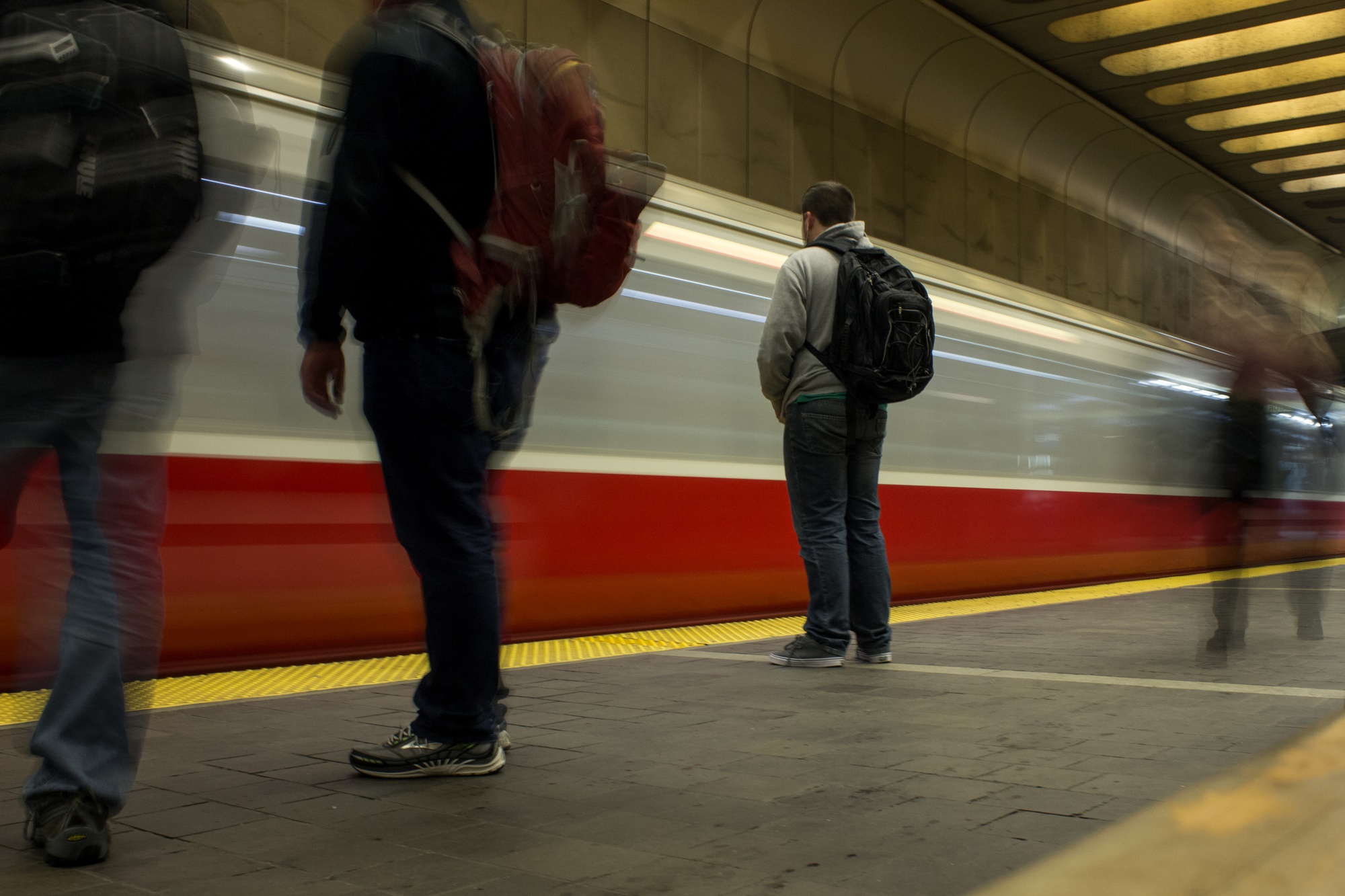 Passengers line up outside an arriving MBTA subway car, preparing to board during rush hour traffic Thursday evening.
Advertisement
Advertisement

To Ornell, honoring Rosa Parks isn’t just about celebrating Parks’ brave actions that ignited the Montgomery Bus Boycott. She says it’s about what Rosa Parks, as an American civil rights leader, represents to Boston and to continuing struggles for justice.
By Vivekae M. Kim

It all started on a public bus in Miami last October. Natalie B. Ornell, a Braintree resident, spotted a black-and-white oval sticker decal inscribed with the words, “Seat dedicated in honor of Rosa Parks, 1913-2005” in English, Spanish, and Haitian Creole.

Ornell was moved by the tribute. She never expected to see a dedication to Rosa Parks on a public bus. After returning home from vacation, Ornell got straight to work contacting local officials to bring the idea to Boston. Her hard work paid off—State Senator Walter F. Timilty called her and told her he would propose a bill.

To Ornell, honoring Rosa Parks isn’t just about celebrating Parks’ brave actions that ignited the Montgomery Bus Boycott. She says it’s about what Rosa Parks, as an American civil rights leader, represents to Boston and to continuing struggles for justice. Ornell has resided in the Boston area since first grade and attended Braintree Public Schools and a private Cambridge high school. But looking back, she feels as though she missed a core part of her historical education.

In the 1970s, Boston attempted to desegregate schools through busing. This effort resulted in widespread violence and conflict. Louise Day Hicks, an infamous Boston politician, was ardently opposed to the desegregation effort. But Ornell never heard about any of this history in her classrooms.

“We never talked about the fact that white kids were throwing rocks at black kids as they were getting off the bus,” she says. “Why wasn’t I ever taught that?”

According to Ornell, “history was being erased.” But she believes that Boston is still a very segregated place, and that it needs to reconcile its past with its present. “I think it’s healthy to bring all that [history] into the open for people to confront it.”

And that’s exactly what she hopes the sticker decal will do.

“The Boston Globe just did a whole series about how Boston has been talked about as one of the most racist cities in the United States. It’s not a welcoming, comfortable environment for people of color,” Ornell says of The Globe’s seven-part Spotlight Team series titled “Boston. Racism. Image. Reality.”

The series highlights the city’s history of racism and its effects on present-day segregation, health disparities, and representation. Ornell says it seemed that while the series’ conclusions were shocking to white residents, they weren’t new revelations for people of color in Boston. Ornell sees this as evidence of how far the city must go in terms of racial process. She says there must be “a reconciliation… where we start addressing these issues more.”

Ultimately, she hopes that amplifying Rosa Parks’ history in Boston will also be a part of an awareness-raising movement for other, lesser-known civil rights activists like Claudette Colvin—who, at 15, was arrested for similarly refusing to give up her seat.

She also believes that prominent women are often less celebrated than their male counterparts, especially African-American women. She hopes that these decals will help bring much-deserved recognition to Parks. “How many people are willing to be arrested for what they believe in, to risk their lives like she did?” she asks.

Ornell’s interest and passion for social justice is reflected in her work outside of this initiative as well. She is currently a grant writer at the Asian American Civic Association, a 51-year-old nonprofit in Chinatown that provides immigration, job training, and social services. “The clients that we serve have definitely faced a lot of discrimination in the workplace,” she says. “That’s an important part of our role—at the AACA—to acknowledge that.”

Ornell studied East Asian Studies at Wellesley before continuing her studies at UC Berkeley for a Master’s degree. She went on to work as a journalist: first at The Patriot Ledger in Quincy, then at Sampan, the only bilingual Chinese-English newspaper in New England. Through these experiences, Ornell realized the significance of diverse representation in media. She noticed how diversity can be instrumental in dictating coverage, and how marginalized communities can be inadvertently ignored.

Before her Rosa Parks advocacy efforts, Ornell participated in a program at the Massachusetts Statehouse called the Commonwealth Seminar, which gave legislative and political training to community leaders of color and immigrant groups. Inspired from this training, she says that the opportunity to implement change with the decal initiative—her first legislative advocacy project—created the perfect storm: “It just all came together—‘I should do something.’”

Notably, the new bill, SD.2460, currently only provides for the decal’s display in February. However, State Senator Timilty has told Ornell that the bill will be amended to be a permanent measure as she intended. Ornell believes this is crucial: “We can’t erase people from the rest of the year.”

On February 5th, 2018, the Cambridge City Council voted unanimously to adopt a policy order in support of the state legislation. Ornell wants to keep up the momentum—she currently has received 12 letters of support from Boston city councillors and other Massachusetts public officials including Braintree Mayor Joseph C. Sullivan, Quincy Mayor Thomas P. Koch, and U.S. Congressman Michael E. Capuano. She has also received approval from the NAACP Boston Branch, the Rosa and Raymond Parks Institute for Self Development, and State Representative Russell Holmes. Her petition has almost 200 signatures.

While a date is still pending, there will likely be a public hearing for the initiative at the Statehouse within the next few weeks. Until the hearing, Ornell hopes to continue collecting letters of support and finding people who will testify favorably at the hearing. She also plans on holding a public school art contest to collect potential decal designs.

When asked what she would say to those who want to take on grassroots efforts like her own, Ornell says, “If you find something you really believe in, then I believe you can make it happen… you just have to be really persistent… be patient and keep trying.”

A previous version of this article incorrectly indicated the name of the Mass. State Senator mentioned in this article as James E. Timilty. In fact, his name is Walter F. Timilty.