‘I Was Anastasia’: An Oddly Organized Novel 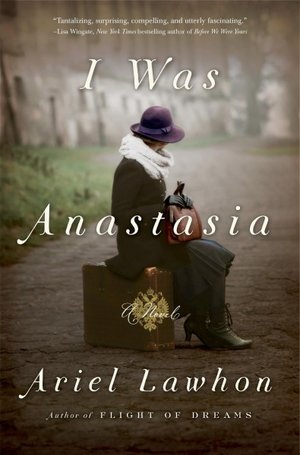 Ariel Lawhon’s novel “I Was Anastasia” opens with an epigraph, a bold assertion from the iconic novelist Rudyard Kipling: “If history were taught in the form of stories, it would never be forgotten.” It’s a powerful sentiment, compelling yet undoubtedly grandiose. The epigraph is an omen of what is to come: a novel with an interesting story and refreshing structure that falls slightly short. In the end, “I Was Anastasia”’s promising concept sets expectations high, which makes the novel’s less-than-perfect execution slightly disappointing.

The novel tells two stories simultaneously, that of the young Grand Duchess Anastasia Romanov during the Russian Revolution as her family is dethroned and shipped off to exile, and the other of a mysterious woman called Anna, who claims to be Anastasia and to have escaped the firing squad that destroyed the rest of her family. The novel switches between chapters entitled “Anna,” (which begin 1970 and then move backwards through time) and ones entitled “Anastasia," (which begin in 1917 and move forward). The novel ends as the stories collide in 1918. As the two stories unfold at the same time, Lawhon introduces parallels between the lives and characters of the two women, but does not answer definitively whether they are one and the same, leaving that up for speculation.

The Russian Revolution isn’t immediately evocative of Sherlock Holmes, but Lawhon seems to have this iconic detective in mind as she constructs her novel. The first part opens with an epigraph from Sir Arthur Conan-Doyle, which Anastasia’s father reads to her from the Sherlock Holmes stories, as “he puts a bit of straw into the fire and uses it to light his pipe.” Much like a mystery novel, “I Was Anastasia” is designed to force the reader into the role of detective. In a typical murder mystery, information is revealed as the detective discovers it, so that to read the novel is to become a partner in the detective’s work. “I Was Anastasia” employs this principle and applies it to a different kind of mystery, a historical one, solved not by analyzing people but by analyzing their stories—records, correspondence, things they might have left behind. Instead of an eccentric private investigator, the detective is Ariel Lawhon herself. In the author’s note, Lawhon writes, “I read all of Anna Anderson’s biographies backward, from last chapter to first,” in order to learn Anna’s story in the same chronology as in the book.

The book is clearly well-researched and the historical elements are woven seamlessly into Lawhon’s fictional construction. Character’s like Gleb Botkin (son of the Romanov’s physician and Anna’s most faithful supporter) and Pierre Gilliard (the Romanov tutor who is convinced Anna is a fraud) are woven into the fabrics of both stories. Their stories are intermingled with the fictional narratives that Lawhon creates for them. In one surprisingly compelling scene, Anna meets with Hitler. His readiness to believe her story disgusts her, along with the “hypnotic tone to his voice.” Lawhon writes that “the air almost crackles with his zeal, and she fears any movement on her part will bring a static charge.” History is balanced perfectly with fictional narrative, enough to ground the novel without overpowering the story.

But if the concept is innovative and the adaptation of history expert, the writing itself leaves something to be desired. The first section of the novel is entitled “Fair Warning.” Less than a page long, it is a jarring second-person address from a first-person narrator. The section ends and introduces the first narrative part of the novel with two lines: “Are you ready? Good. Let us begin.” Like the Rudyard Kipling epigraph, this introduction suggests a story that takes itself too seriously. The narrator seems to haughtily say, “Brace yourself. This story is great.” The need to announce that the novel is about to start does not bode well.

The novel is written in present tense, and the result is slightly awkward, especially given the novel’s non-chronological structure. While the history is incorporated well, the German sprinkled throughout the novel is heavy-handed, often followed immediately by translation: “She decides then that the man is an utter Arschloch. Asshole.” There are moments of tenderness, poetry and poignancy and humor—in one scene, in the aftermath of a sexual assault, Lawhon writes that “the night’s terrors are replaced by an eeriness that settles heavily in the air” and then powerfully asserts that “there is nothing artistic about rape.” But these moments are few and far between.

In the author’s note, which is of considerable importance to the book, Lawhon explains that she is “drawn” to both Anna and Anastasia. Whether or not they are one and the same, they are both “worthy of our attention” and sympathy. Lawhon seems to suggest in her note that she has written the book with the aim of eliciting similar feelings from her audience. But these characters, and in particular Anna, are a bit irksome. In Anastasia’s sections, Lawhon takes time to depict the positive qualities of her character. But in Anna’s case, it seems often like any exploration of her personality is sacrificed to make room for further discussion of her misery, making sympathy more difficult.

Lawhon also makes an interesting style choice that does not pay off by having Anastasia’s sections told in first person, and Anna’s in third person. While this does make it easier to differentiate between the two parts, there remains some confusion as a result of the first person introduction and conclusion that frame the novel. Why not keep the entire book in the first person? Moreover, in writing Anna’s story in the third person, Lawhon passes up a prime opportunity to explore an unreliable narrator, in a way that would perfectly complement the novel’s overall structure.

The novel’s structure and its historical grounding make its concept compelling, but some off-putting style choices and gaps in character development ultimately detract from its execution.