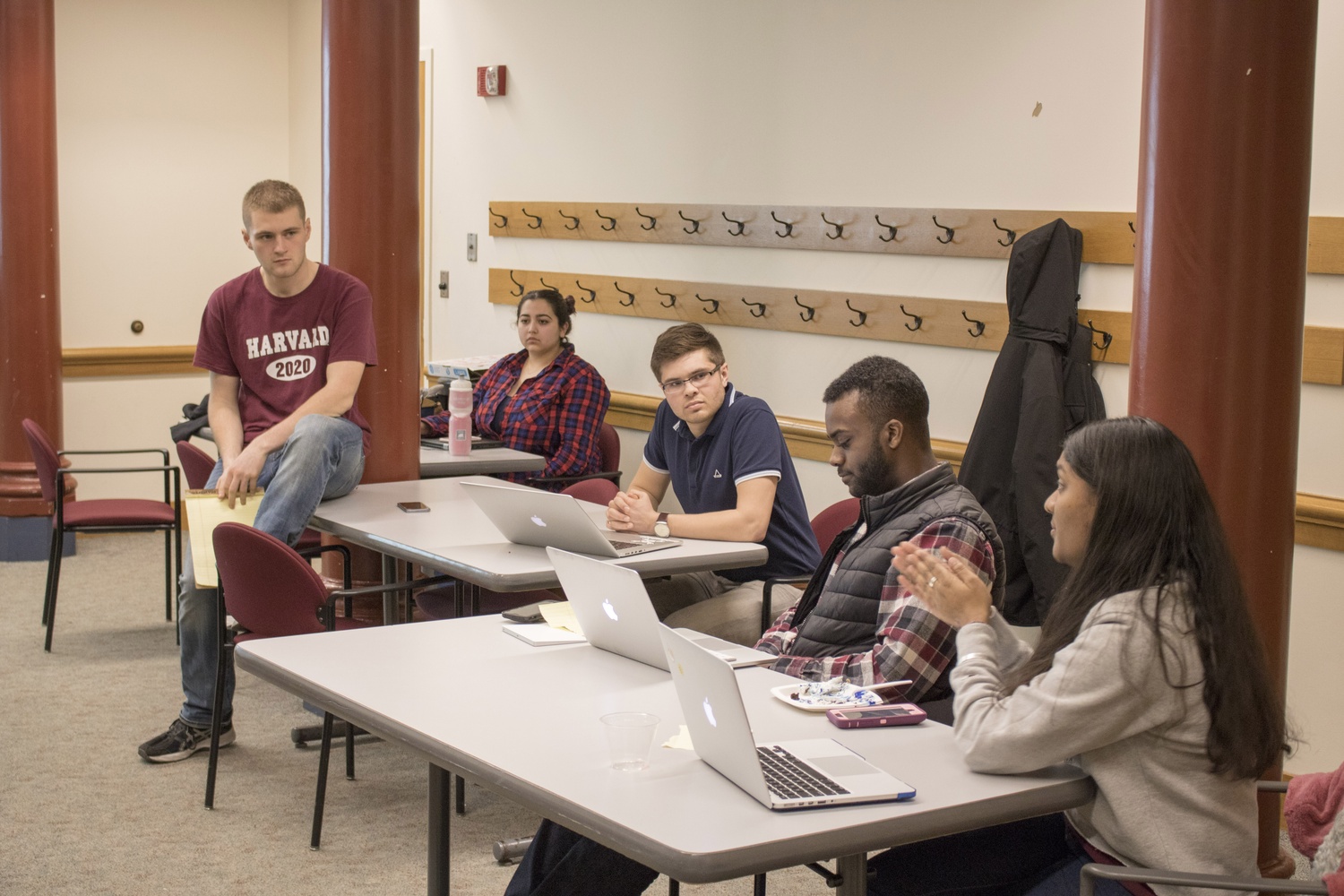 The Undergraduate Council’s finance committee voted to recommend legislation that would bar religious group Harvard College Faith and Action from all Council funding at a weekly policy meeting Wednesday evening.

The motion, titled “An Act in Solidarity With the LGBTQ Community,” requires that HCFA leadership make “tangible” reforms before the group can—pending finance committee review—again receive UC funding. The act passed by a vote of 8-2, meaning it will be docketed by the UC’s executive team before appearing for a vote at the next UC general meeting, slated to be held after spring break.

The College placed HCFA on a year-long “administrative probation” last month. The Crimson reported Feb. 22 that the punishment was most likely due to the religious group’s Sept. 2017 decision to ask a woman in a same-sex relationship to resign from her leadership position.

After administrators announced HCFA’s probation, the finance committee voted down a previous draft of legislation intended to bar the group from UC funding. During that vote, members operated under the assumption that “administrative probation” meant HCFA was automatically prohibited from UC funding.

“What I know is that they have said they’ve created a plan of what needs to change over the coming year,” Boucher said. “I have not seen a plan… but when we asked if that plan included being limited in funding from the UC they said no, that’s not the case.”

The decision to allow HCFA to continue to receive UC funding seems to fit with the OSL’s larger approach to enforcing the group’s probation to date. Christian Union, HCFA’s parent ministry, wrote on its website on March 1 that the Office of Student Life has chosen not to deny HCFA the ability to reserve rooms or recruit students on campus—both key privileges afforded to recognized student organizations on campus.

The OSL website only details what probation means for recognized student groups who specifically fail to complete the annual mandatory renewal of their recognition. For these groups, administrators revoke privileges including the ability to reserve campus spaces and receive funding from the UC and College offices for one semester, according to the website.

Henry S. Atkins ’20, the chair of the finance committee, said Wednesday he had reached out to Miller via email, but had not received a response as of that evening.

Many committee members at the meeting said that they did not believe the Council should be funding HCFA in light of the group’s behavior in Sept. 2017.

“I think that what happened was particularly egregious, I think that it merits this response,” Atkins said.

“I don’t want gay and bisexual people’s money to go to an institution where they are not eligible to be leaders because we need to remember we are giving out students’ term bill money and we’re giving out the money from people that identify with these communities,” Ivy Yard representative Seth Billau ’21 added.

Other representatives—like Dunster House representative Gevin B. Reynolds ’19—said they want to gather more viewpoints and information before moving forward with the funding ban.

“My hesitation with this is we don’t have the same factual documentation that what was alleged in fact happened,” Reynolds said. “If someone from the OSL sat down with us, someone from HCFA sat down with us and said here’s what we did… then I could say, ‘Yes this response is certainly warranted.’”

Council executives previously debated inviting HCFA co-presidents Scott Ely '18 and Molly L. Richmond '18 to speak at a meeting of the full body, but ultimately decided against the invitation after discussions with "administrative advisors."

Much of the debate at Wednesday’s meeting centered on what members called the need to separate the decisions and opinions of HCFA’s leadership from the sentiments of the rest of the membership.

“If what happened actually happened, it wasn’t because of Christian values, it was because of what one or two people may have done, right, so trying to lump everybody into what had happened I think is really unfortunate and can really hurt a lot of people,” Elm Yard representative Jordan M. Silva ’21 said at the meeting. Silva also said he is a member of HCFA.

The discussion led UC members to add a clarification to the proposed legislation specifically noting that the actions of HCFA’s leadership—rather than HCFA as a whole—violated “values held sacred” by the Council.

The first draft of the legislation specified HCFA would again be able to receive UC funding once the College chose to remove the group from probation and after HCFA demonstrated “contrition.” After debate, though, the finance committee deleted that provision.

Instead, committee members added the clause requiring that the committee must approve of HCFA’s “tangible action to reform” before the group can again receive funding.

Before the committee’s final vote Wednesday, Boucher urged members to seek more information about HCFA, its recent actions, and the College’s decision to punish the group.

“As an individual, I feel like I’ve heard a lot on this,” Boucher said. “I don’t feel like I know everything because to be explicit I have not talked to HCFA in this setting and engaged with them and the conversations that I’ve had with the OSL have been in private advising meetings.”