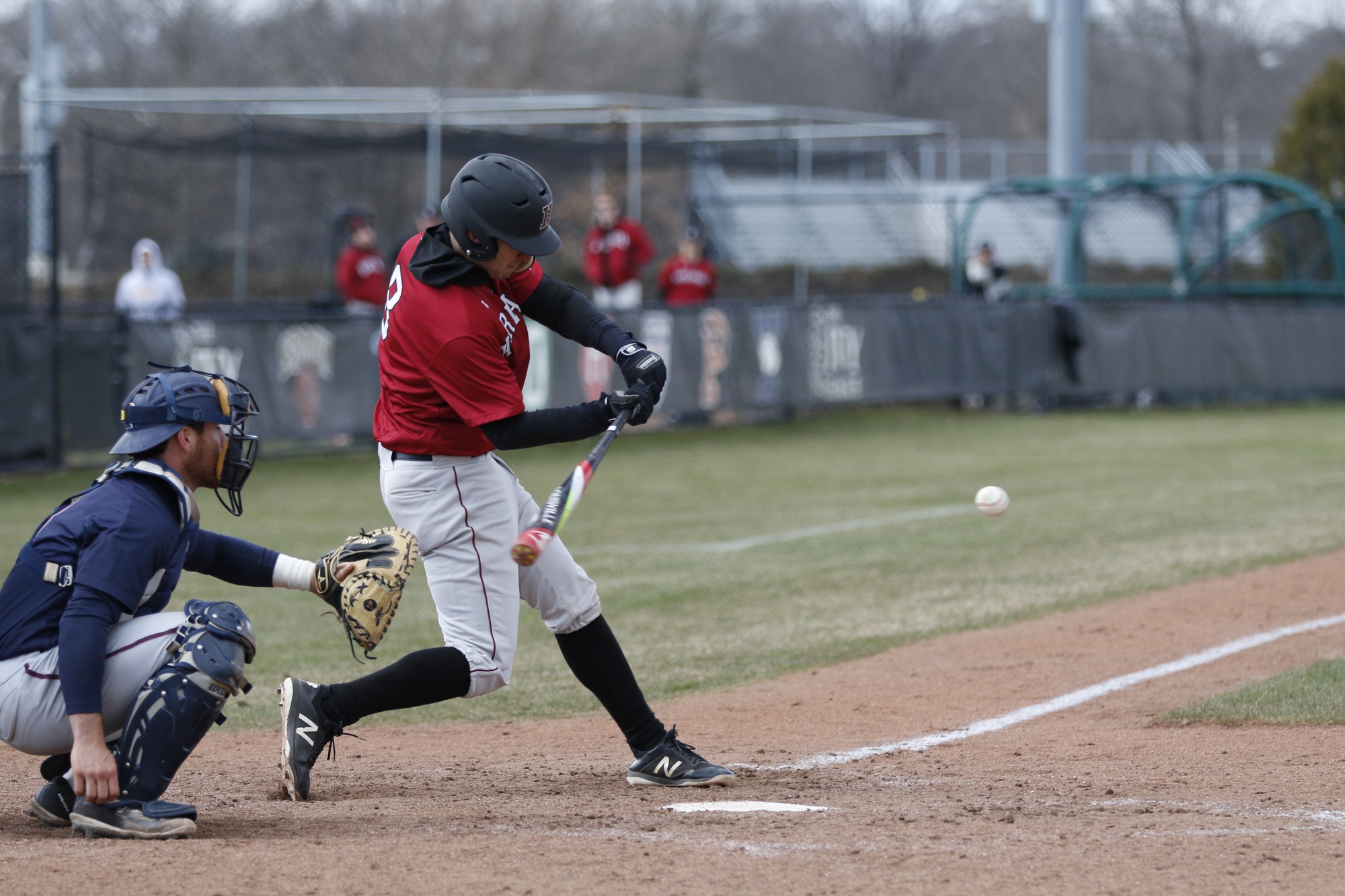 For just the fourth time in program history, the Harvard baseball team has won the sole Beanpot championship.

The Crimson rallied explosively after going down 6-0 early, plating eight unanswered runs and shutting down the Huskies (18-11, 5-1 CAA) late to ride out the triumph. Freshman shortstop Buddy Mrowka’s third-inning bases-clearing triple proved to be the difference-maker.

Leaving Friedman Diamond in Brookline, Mass., the Harvard squad knew that capturing the Beanpot title was a rarity to cherish.

“Especially being a local guy, growing up with the Beanpot, [winning the title] means a lot,” said rookie right fielder Tommy Seidl, who hit second in the order and scored a run. “It’s a big deal around here, not so much for the rest of the country—but definitely for me and the local guys, it means a lot.”

What makes the Beanpot victory especially remarkable was that Northeastern had a remarkably strong team, ranked 14th in the nation, according to the RPI Division I rankings compiled on April 10. The Crimson was 157th on the same list, far below its southward neighbors.

“It’s a big-time win for us,” said junior catcher Devan Peterson, who hit an RBI double in the second to jumpstart Harvard. “I’ve been dreaming about winning the Beanpot ever since I came to college. Now, to have that trophy on the bus with us, it’s an unbelievable feeling.”

The Crimson had an inauspicious start, as starting pitcher junior Kevin Stone was tagged for six runs and three walks before he even recorded his second out. Huskies sophomore outfielder Kyle Peterson did the most damage, hitting a grand slam with one out. By the time the Harvard defense jogged back to the dugout after the bottom of the first inning, nine Husky batsmen had stepped to the plate and the score was 6-0 in favor of Northeastern.

But to Stone’s credit, he stepped it up, settled down, and prevented any more scoring thereafter. The resilience required to shut down such a strong team after a bad start was a true “Bad Boy” effort.

“The first inning was a little bit shaky, but he bounced back,” said freshman pitcher/designated hitter Buddy Hayward. “None of us ever doubted him. He’s a true Bad Boy—we all knew that he was going to come out and shove. Post first-inning, Kevin Stone was the true Kevin Stone that we know and love.”

Stone didn’t have his best stuff, walking five, but still finished with a line of 5.0 IP, six hits, five earned runs, and two strikeouts. As head coach Bill Decker believed in him and let him stay in the game, the righty got the gutsy win to move to 3-2 as a pitcher.

The two-man relief effort following Stone’s exit was just as instrumental in preserving the Crimson’s win.

Junior outfielder John MacLean, thus far thriving this season on the mound, excelled in the sixth and seventh innings, giving up one hit and striking out one in 2.1 shutout innings. According to his teammates, MacLean had an interesting secret to success leading up to the game.

“None of us were surprised when he came in and did the job that needed to get done,” Hayward said. “I don’t know if you’ve seen his hair, but Johnny’s a little wild. He says he’s been eating only beans for the week leading up to this, just to get ready.”

Sophomore righty Kieran Shaw, fresh off a six-out save over the weekend, recorded a clean five-out save thereafter to send the teams home. The Los Gatos, Calif., native recorded two K’s, one of which was a swinging strikeout to end the game and begin the celebration.

Shaw didn’t need legumes to shut down the Northeastern offense, however.

“Keiran followed up with a great performance, just throwing strikes, getting guys out,” Hayward said. “It was awesome. It was so fun to watch from the dugout.”

While the pitching staff was busy keeping the Harvard squad in the game against a strong team, the offense used an explosive rally in the third inning to overcome the initial hole and never look back.

Down 6-2 in the top of the third, the Crimson got off on the right foot with a Seidl walk to lead off. Junior first baseman Pat McColl followed with a single, and junior slugger Patrick Robinson brought Seidl home with a single to inch Harvard closer.

With momentum on its side and the comeback in progress, the Crimson rattled off a huge inning perfectly exemplary of the crooked innings its offense has come to utilize. With one out, senior second baseman Matt Rothenberg smacked an RBI single to right to make it 6-4 and keep the bases loaded.

Mrowka then made the Huskies pay with a bases-clearing triple to the deepest part of Friedman Diamond, giving Harvard an unlikely 7-6 lead the Crimson pitchers would never relinquish.

“They came out swinging, got the 6-0 lead, but we came back, took the lead right back,” Peterson said. “The pitching staff, being the Bad Boys that they are, they came in and shut it down for the rest of the game. It took a lot of grit, but we were happy with it.”

Peterson’s sac fly to score the freshman tacked on an insurance run, but Mrowka’s three RBIs, his sixth, seventh, and eighth on the year, proved to be the winners.

With an 8-6 lead in hand, the Harvard pitching limited Northeastern to nine scattered hits on the game, though the Huskies got two loud flyball outs in the bottom of the sixth. The Crimson, meanwhile, got 11 hits, led by Rothenberg, McColl, Mrowka, and Peterson, who all had two-hits days.

Peterson got Harvard on the board with a two-RBI double in the second inning, an important hit that gave the Crimson an immediate response to the Huskies’ six-spot a frame prior.

“I was sitting dead-red, saw a pitch that I liked right in my wheelhouse,” said Peterson of his second-inning two-bagger. “Took a good swing on it, and luckily put it in the gap, scored a couple of runs. It felt pretty good to get the boys on the board.”

The loss denied the Northeastern its seventh Beanpot title but added to Harvard’s sole titles in 1991, 2005, and 2014. The Crimson won a joint title in 1998 with UMass when the championship game was rained out.