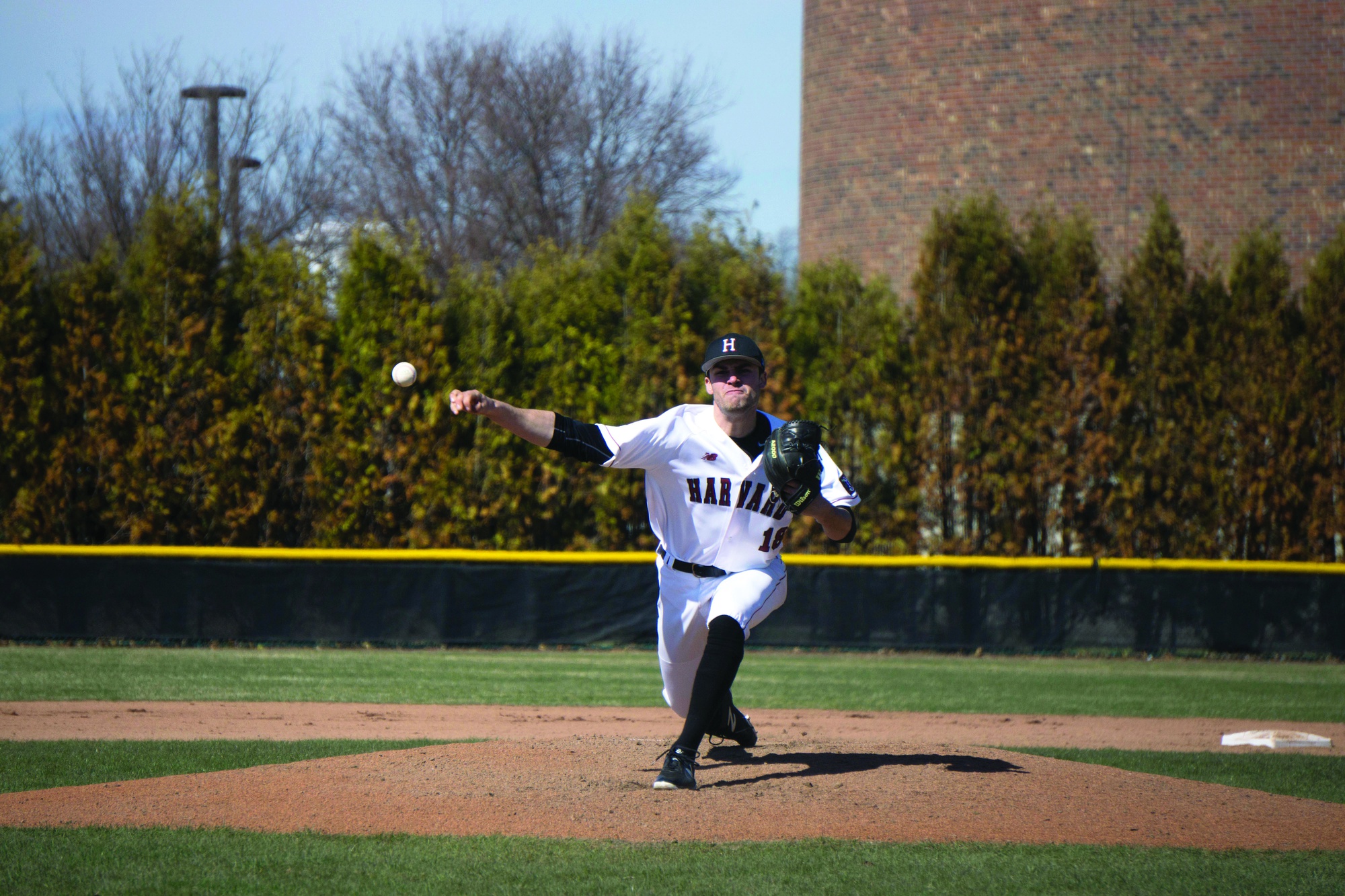 After a win over a strong Northeastern team, the Harvard baseball team entered last weekend coming off a huge Beanpot championship win. No shortage of confidence could be found on the squad as the Bad Boys of Boston drove down to West Haven, Conn., last Friday to take on conference leader Yale.

The three-game tilt started off with a bang.

Senior righty Noah Zavolas threw a dazzling no-hit performance in a 4-0 win on Friday evening, bringing a perfect game into the eighth inning before allowing a baserunner on an error. The victory moved the Crimson briefly over the .500 mark to 4-3 in conference play.

“Definitely one of the biggest games I’ve ever pitched,” said Zavolas of his no-hitter. “Really, really special night, especially being able to go out there on a Friday night against our rival. To be able to play under the lights was beautiful, in a setting like Yale. Just an incredible night all around.”

The senior, taking the mound for his 17th career start in a Crimson jersey, pounded the strike zone all game, KO’ing 12 Bulldog hitters and inducing 12 ground ball outs. Zavolas’s final line: 9.0 IP, no hits, no runs, and one walk.

“I have a good view from center field and watching him pitch was pretty incredible,” said junior center fielder Ben Skinner. “That was, by far, the best pitching performance I’ve ever seen. I mean, obviously no-hitters are extremely rare, but just the way he got ahead of hitters, minimized mistakes, and how every pitch was purposeful and located extremely well, was honestly awesome to watch.”

Despite the pitcher’s dream accomplishment, however, Harvard couldn’t muster the same magic the next day, losing both games of Saturday’s doubleheader to drop to 4-5 in the Ivy League and 14-16 overall. Yale (14-15, 9-3 Ivy League), meanwhile, remains atop the Ancient Eight standings.

The Crimson now sits sixth in the Ivy table, behind Yale, Columbia, Dartmouth, Princeton, and Penn. Harvard has already dropped two of three to Columbia and won two of three against Penn but has yet to play Princeton and Dartmouth.

Even after Zavolas’s historic game, the series loss means that the Crimson will need to essentially win out, as pointed out by Zavolas himself, if it aims to climb back into Ivy League contention.

“We have a pretty unique opportunity this coming week because we have the makeup series against Princeton on Tuesday and Wednesday,” Zavolas said. “If we can have some success there, it’s really a matter of controlling our own destiny from there on out.”

Zavolas wasn’t the only lights-out pitcher in the dugouts over the weekend. The Harvard offense met an immovable force on Saturday evening, as Bulldogs senior Eric Brodkowitz tossed a complete-game, four-hit, one-run effort to stake Yale to a 4-1 series-capping win over the visitors.

The top third of the order were the only three Crimson players who could touch Brodkowitz.

Skinner went 1-for-4 in the leadoff spot, junior first baseman Pat McColl went 2-for-3, and sophomore right fielder Jake Suddleson went 1-for 4 in the three-hole. The rest of the lineup went hitless.

“We ran into a guy with good stuff who was really on that day,” Skinner said. “He had a few different pitches working for him, which is tough.”

Harvard countered with junior righty Simon Rosenblum-Larson, who pitched a five-inning, two-run effort to keep his team in the game. Rosenblum-Larson has now pitched 42.2 innings on the year and has a 3.16 ERA, both second-best on the team.

The Crimson, however, was hurt by sloppy defensive play, as one of the Bulldog’s four runs was unearned, and two more scored on wild pitches.

In the cleanup role, senior designated hitter Austin Black gathered the only RBI on a groundout in the ninth to drive in McColl and bring the score to 4-1. It didn’t matter, though, as Brodkowitz got third baseman Hunter Bigge to line out in the next at-bat to end the game.

“Going forward, we’re going to stick with our same approach, trying to keep putting runs on the board,” Skinner said. “We’re confident in our offense—we’ve proven this year that we’re a team that can put up a lot of runs. We’re trying to have a short memory with [the loss], but it obviously wasn’t the outcome we were looking for.”

A day after being no-hit, the Bulldogs came back with vigor, scoring in the first inning against Bigge, who was making his seventh appearance on the mound as a two-way player this season. Harvard stayed close for awhile, tying the game briefly, but it was Yale that emerged victorious after it exploded for eight runs across the sixth and seventh innings.

McColl led the way for Harvard, going 3-for-4 at the plate, helping the junior raise his post-series average to .286. A huge part of Yale’s success, however, was in not allowing McColl—the Crimson’s RBI leader—to register a single RBI during the series.

Four relievers followed Bigge to the mound for Harvard. Sophomore righty Grant Stone got the loss after giving up all five runs of Yale’s crooked sixth inning, which gave the Bulldogs a 7-2 lead.

Suddleson, hitting in the three-hole, drove in two runners—though officially, only one RBI—on a single in the top of the sixth. The knock tied the game, at that point, at two runs apiece, though Yale pulled away in the bottom half against Stone.

The two teams combined for 25 hits and 16 runs, though the Bulldogs outhit the Crimson 14-11.

The highlight of Harvard’s weekend was undoubtedly watching its veteran pitcher go to work against the Ivy League leaders.

Mowing through a Yale lineup with the conference’s second-highest batting average, Zavolas faced just two above the minimum 27 and made it look effortless on the mound. The no-no was the Crimson’s first in 17 years, when former Harvard standout Ben Crockett, now in the Red Sox front office, did it against Dartmouth in the 2001 season finale.

“Really, it was just getting ahead early and often,” Zavolas said. “Getting in counts that I was behind in, being able to come back, especially with offspeed stuff—a lot of breaking balls in fastball counts, to keep hitters kind of on their heels. It really was a story of throwing pitches for strikes the whole night.”

Zavolas is now 4-1 as a starter this season and has a 3.38 overall ERA. The senior ranks fourth in the conference with a 2.35 Ivy-only ERA and second with a .218 batting average against.

The starter got backup in the form of the whole squad, as the Crimson recorded ten knocks and four different Harvard players registered RBIs.

After Suddleson and Black got in base to lead off the top of the second, Bigge singled home a run. Following another hit by junior catcher Jake Allen, freshman shortstop Buddy Mrowka hit a bases-loaded single and Skinner tacked on another run with an RBI groundout to give Zavolas an early 3-0 lead to work with.

Zavolas responded by getting a 1-2-3 inning in the bottom of the second. The rest is history, as the Acton, Mass., native went on to set down the first 23 Yale batters in a row.