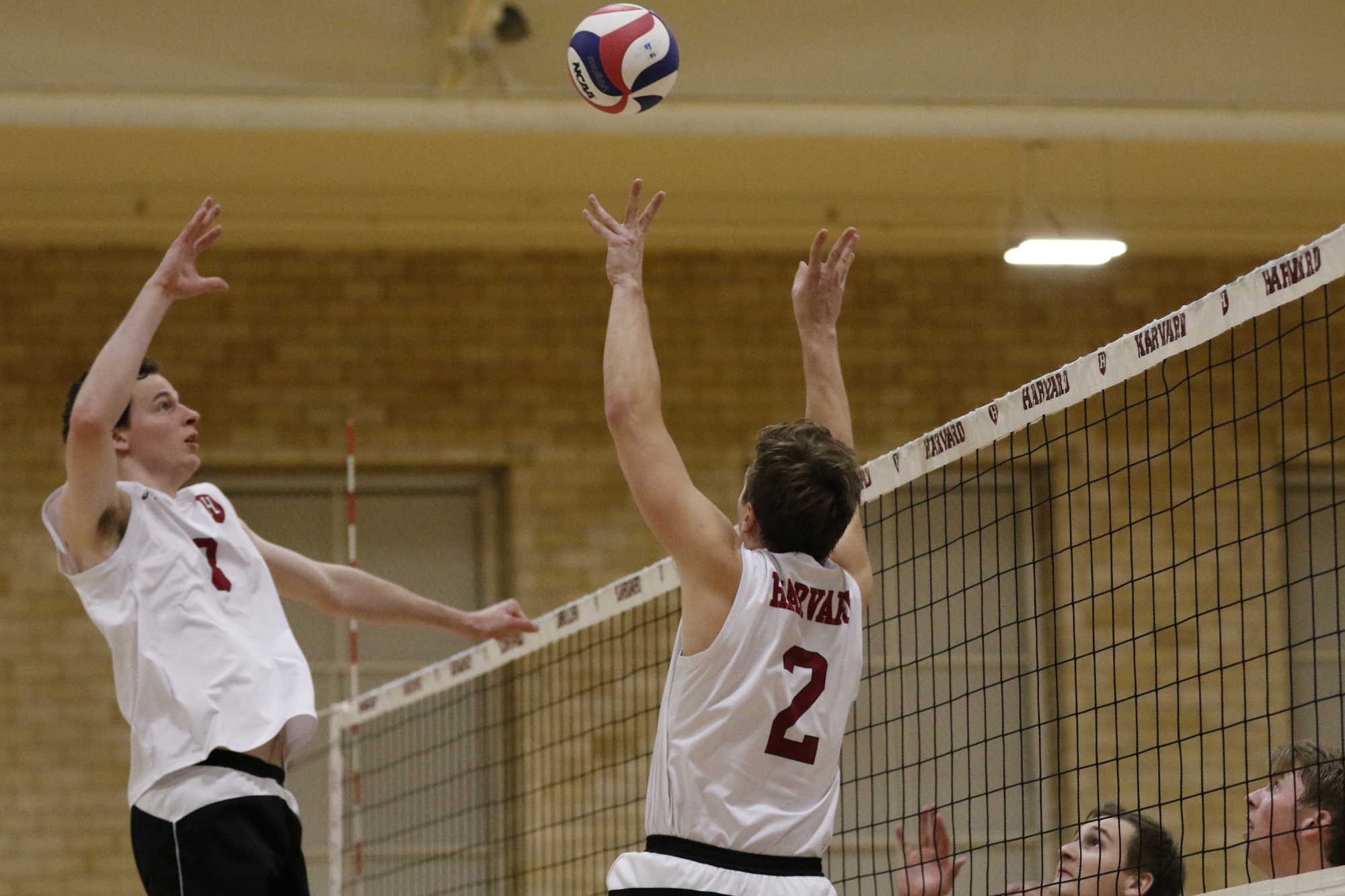 With a six-game win streak and recent defeat of 11-season consecutive EIVA division champion Penn State in the rearview mirror, Harvard traveled to George Mason for the EIVA regular season championship match with a beefy résumé.

However, on Friday at the Recreation and Athletic Complex the Crimson failed to record win needed to secure a regular season conference title. Dropping both games to its Patriot rivals, the team left Virginia with the division’s second seed and a rematch with Penn State scheduled for Thursday in the EIVA semi-finals.

“For Penn State, we’ve seen what they can throw at us earlier this season and handled it, so we’re focusing on simply sticking to our system and playing our game,” captain outside hitter Jack Heavey said. “We’re watching film and practicing tendencies, but we know that it comes down to our ability to execute on our side that’s going to determine that match.”

With one loss under its belt, the Crimson came out swinging on Saturday against the division’s top opponent. That materialized in a quick 5-0 lead and then again as senior Marko Kostich registered three kills in the 25-18 first set victory. The senior setter recorded a team-high 13 kills across all three sets, while in the first set alone, the group accomplished 12 kills for a match high .440 hitting percentage.

The second meeting between the squads merited a 3-1 finish after Harvard took set number one, 25-18, before dropping the subsequent three sets, 17-25, 20-25, 19-25. However, its fate for the EIVA tournament already determined, the team rested many of its starters during the grudge match.

“After we lost Friday night we already knew we would be playing in the two vs three game of playoffs,” said co-captain and middle blocker Riley Moore. “It was more important to get a few key guys rest than it was to fight for extra wins in the record books.”

Leading in kills, Kostich also finished with a team-high .545 attack percentage and 10 assists en route to his fifth career double-double. On the other side of the net, the Patriots’ sophomore outside hitter Sam Greenslade punished the Crimson defense with personal-best 21 kills across the four sets. Teammate junior setter Justin Coleman led the squad in assists with a match-high 24 assists.

George Mason thrived on runs. In the final stanza of the match, the Patriots established themselves early on. George Mason found an early lead with four straight points to push the score to 6-4. Harvard managed to push back and maintain a one point deficit at 6-8 before the Patriots took over, hitting a five-point lead as the team went up 15-10 before another three point run pushed the group to 20-14. From there the set was all but sealed with George Mason leaving the court and match on a 25-19 high note.

Characteristically, the Patriots found momentum early in the set with a 5-0 run that nearly mirrored the Crimson’s one set prior. The early five points presented the home team with a 6-2 lead to build on. Greenslade pushed George Mason to another four point run by leading first with a kill. The sophomore took to the service line and found the gaps in the Harvard defense, acing the squad twice building the lead to 14-8.

Just as the set began, so too did it end. On the heels of two Greenslade aces, junior Travis O’Gorman found a kill to put the exclamation point on the 5-0 run and the set, 25-17.

Sophomore setter Matthew Ctvrtlik led the team with 24-assists while accumulating nine digs and six kills as freshman outsider hitter Griffin Schmit added two of his own across the match. Sophomore libero Jack Connolly tied Ctvrtlik in digs, a team-best, as Heavey and Gordon both managed five of their own. Defensively, junior middle blocker Trevor Dow with half of the Crimson’s 10 total blocks.

With the 3-1 victory on Saturday, the Patriots finished the season with a 13-1 division record, the best in program history.

In what was for all intents and purposes the EIVA regular season championship match, the Crimson, fresh off its upset of Penn State, traveled to Fairfax, Va., in a battle for the top seed in the EIVA Tournament this weekend. In a 3-2 decision, the Patriots ended Harvard’s six-game win streak.

An early 25-22 win for George Mason in the first set lit a fire under the bellies of the Crimson as the squad returned to the court hitting hard. A 3-0 run began the second set and established a lead the team did not relinquish until late in the set. Within the first 20 points, the closest the Patriots got to erasing the deficit was one point, at 17-16.

The scores leveled at 24, immediately following a 3-0 run by George Mason. At 27, no team had established an advantage. Two Patriot errors, however, allowed Harvard to tie up the match at one apiece.

Set three featured a similar burst in the beginning but remained neck and neck throughout with 14 lead changes. Hitting a 6-0 run to go up 8-4, the Crimson’s lead was this time relinquished much earlier this set. George Mason called a timeout before mounting a comeback to take the 12-11 lead. Several lead changes later, Harvard took the match lead with a 27-25 victory.

The two subsequent sets fell to the Patriots’ offense prowess, 25-27 and 11-15, respectively. For the Crimson, senior hitter Brad Gretsch recorded his second double-double of the season racking up a career high 23 kills and 11 digs, while hitting .312 percent. Classmate Kostich nearly hit a triple double on the afternoon with nine kills, nine digs, and 24 assists. Ctvrtlik led the team in assists with 26.

On the defensive side of the net, sophomore outside hitter Erik Johnsson led the team with 13 digs while Connolly had a career best of 10.

This match represented the first time this season that George Mason has five players with double digit kills in a match.

The victory for the Patriots secured the regular season championship for the team and the number one seeding for the EIVA Tournament this weekend. It also represents the first time in 11 seasons that someone other than Penn State has held the title. Along with the seeding, George Mason also earns home court advantage four the 2018 rendition of the tournament and chance to play the NCAA tournament.

“Playing Penn State and it being a playoff game we understand how important this is,” Moore said. “We will be working the next two days before heading back to Virginia to make sure we are refocused on their players and get our rhythm back after a hard weekend.”