Harvard held a second unionization election on April 18 and 19—at stake was whether or not eligible students could collectively bargain with the University. The Crimson live updated this article with voter interviews throughout the day both days.
By Crimson News Staff 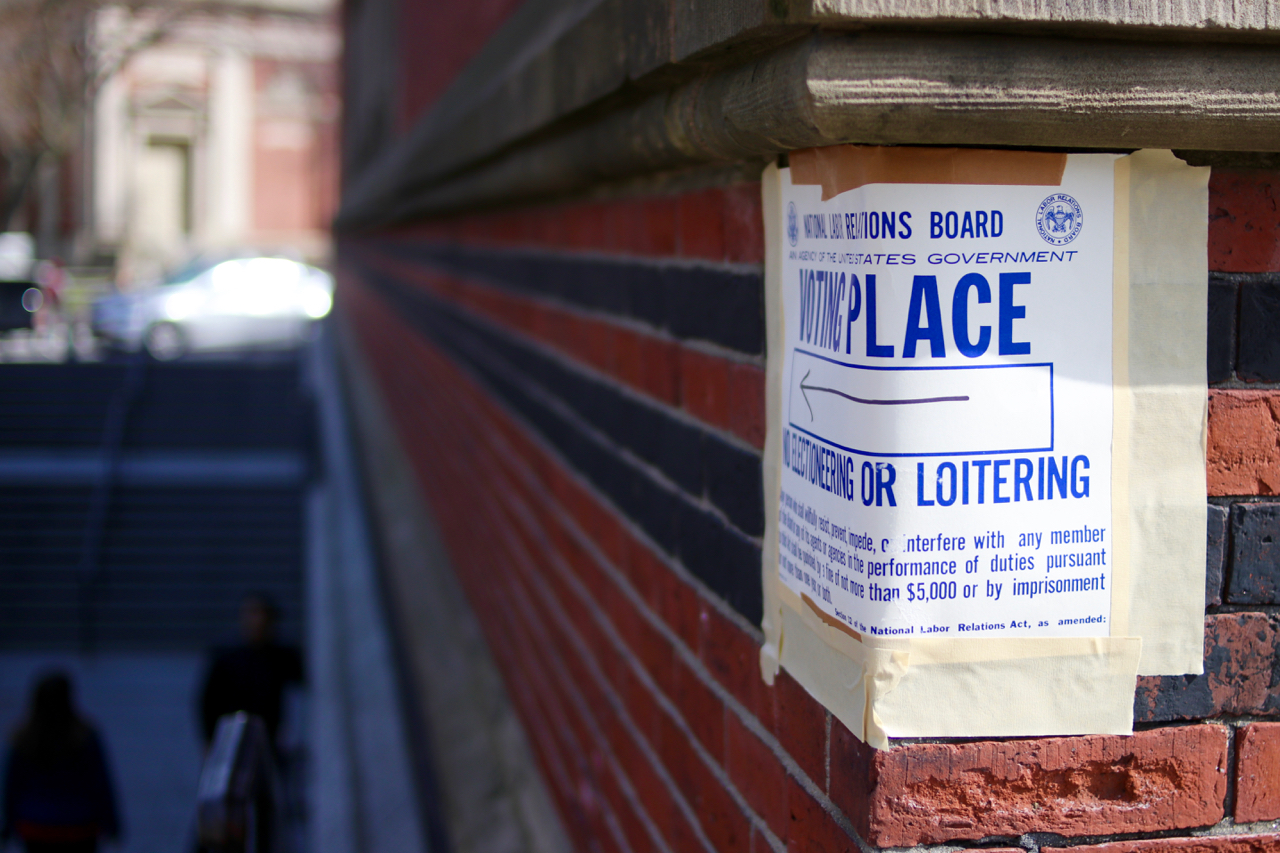 On April 18 and 19, after two years of legal battles between Harvard and union organizers, the University held its second unionization election.

At stake was whether or not over 4,000 eligible graduate and undergraduate teaching and research assistants could begin to collectively bargain with the University.

The results of Harvard's first election, held Nov. 2016, showed more votes against unionization than in favor; but union advocates later questioned the validity of those results, sparking months and months of debate. After three rulings by the National Labor Relations Board and two separate appeals, the NLRB ultimately ruled Harvard must hold a second election.

The Crimson live updated this online-only article throughout the day April 18 and 19. Read below to relive two historic days on Harvard's campus.

April 20, 3:34 p.m.: The National Labor Relations Board's final tally of ballots shows 1,931 votes—or roughly 55 percent—in favor of unionization and 1,523 against. In a historic move, Harvard teaching and research assistants have officially voted to form a union. The installation of a student union is unprecedented in Harvard history.

April 20, 5:00 a.m.: Exit polling data gathered and analyzed by The Crimson shows the results of the unionization election are too close to call. The data—adjusted for response bias—shows a small majority (50.6 percent) of students voted in favor of unionization.

April 19, 11:49 a.m. HBS: Rate of voters remains slow. One female international student—who declines to be interviewed—remarks to a friend that this is the first time she has voted for anything in her life.

April 19, 11:00 a.m., Harvard Business School: Not many voters passing through. Only five in the last hour.

April 18, 6:58 p.m., Queen's Head Pub: Graduate School of Arts and Sciences student Richard Childers declines to say how he voted. But he says he thinks there has been less "buzz" among students about the election this time around.

April 18, 6:30 p.m., Longwood: Stephen C. Thornquist, a graduate student in the Graduate School of Arts and Sciences, stops to explain why he cast his ballot in favor of unionization.

"Honestly, I feel like there were really only weak arguments against it," Thornquist says. "It doesn't seem to me plausible that it could be worse to be able to negotiate and have some sort of say in decisions that affect us so dramatically."

He notes a union will give students "leverage."

"I don't know," Thornquist says. "It's not like me commenting on it does anything."

Around the same time, a student taking one of The Crimson's exit polls reaches the section asking respondents' opinions on various University administrators.

"Man, I wish you had put Paul Curran on here," he says.

April 18, 6:24 p.m., Queen's Head Pub: Voters are streaming in in small groups of friends. Clumps of people chat in English, others in Spanish, and still others in Chinese.

Some propose going out for drinks after voting.

April 18, 4:45 p.m., Longwood: Voters are streaming in slowly but steadily, usually in groups of two every couple of minutes.

April 18, 1:58 p.m., Queen's Head Pub: Harrison H. Li '18—an undergraduate who says he serves as a Course Assistant for a statistics class—says he voted against unionization. He notes he believes unions are a good thing in general but that unionization might not be the best path forward for Harvard in particular. 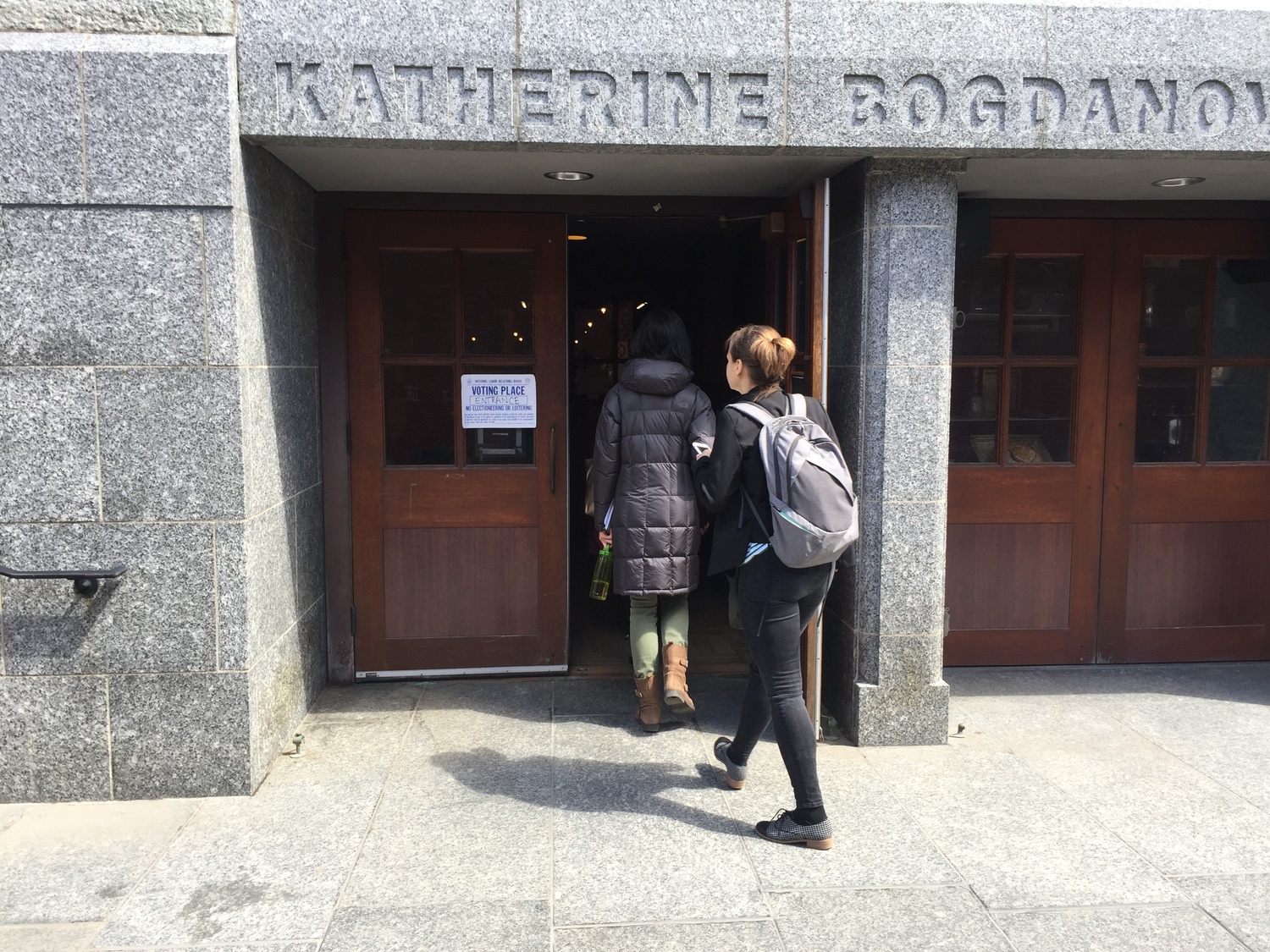 "I just feel that the union would not be representing our particular interests," Li says. "Unionization is generally a good thing but not necessarily for CAs in sciences and math who I think would benefit from not being represented by this broader union."

April 18, 1:24 p.m., Queen's Head Pub: A group of union organizers gathers outside the door to the voting station to chat.

Aad Liaqat, another graduate student in the Graduate School of Arts and Sciences, says he voted for unionization in the last election and he's voting the same way this time around.

He says he thinks that, "a lot of the time" on campus, the power balance can swing against students.

"I wanted students to have more voice in decision-making for our students," he says. "I felt, during my four years here, that we were often not in a position to state our concerns openly and having a union would enable us to do that."

April 18, 12:38 p.m., Queen's Head Pub: Many students arrive with friends; friend groups stand around and members speculate about the results of the election. A question often overheard—"How do you think it will go?"

April 18, 12:19 p.m., Longwood: John L. Pulice, a graduate student in the Graduate School of Arts and Sciences, says he is familiar with unions.

Pulice says he was previously a member of a service union, back when he used to work at a grocery store. He says he really likes unions—but that he is not sure he trusts HGSU-UAW.

He says he was working as a lab technician during Harvard's first unionization election, and says he did not particularly like the way some union organizers attempted to get out the vote at the time. Pulice also notes he thinks the union mandate HGSU-UAW is seeking is "remarkably broad." Harvard's proposed union includes graduate and undergraduate teaching and research assistants. 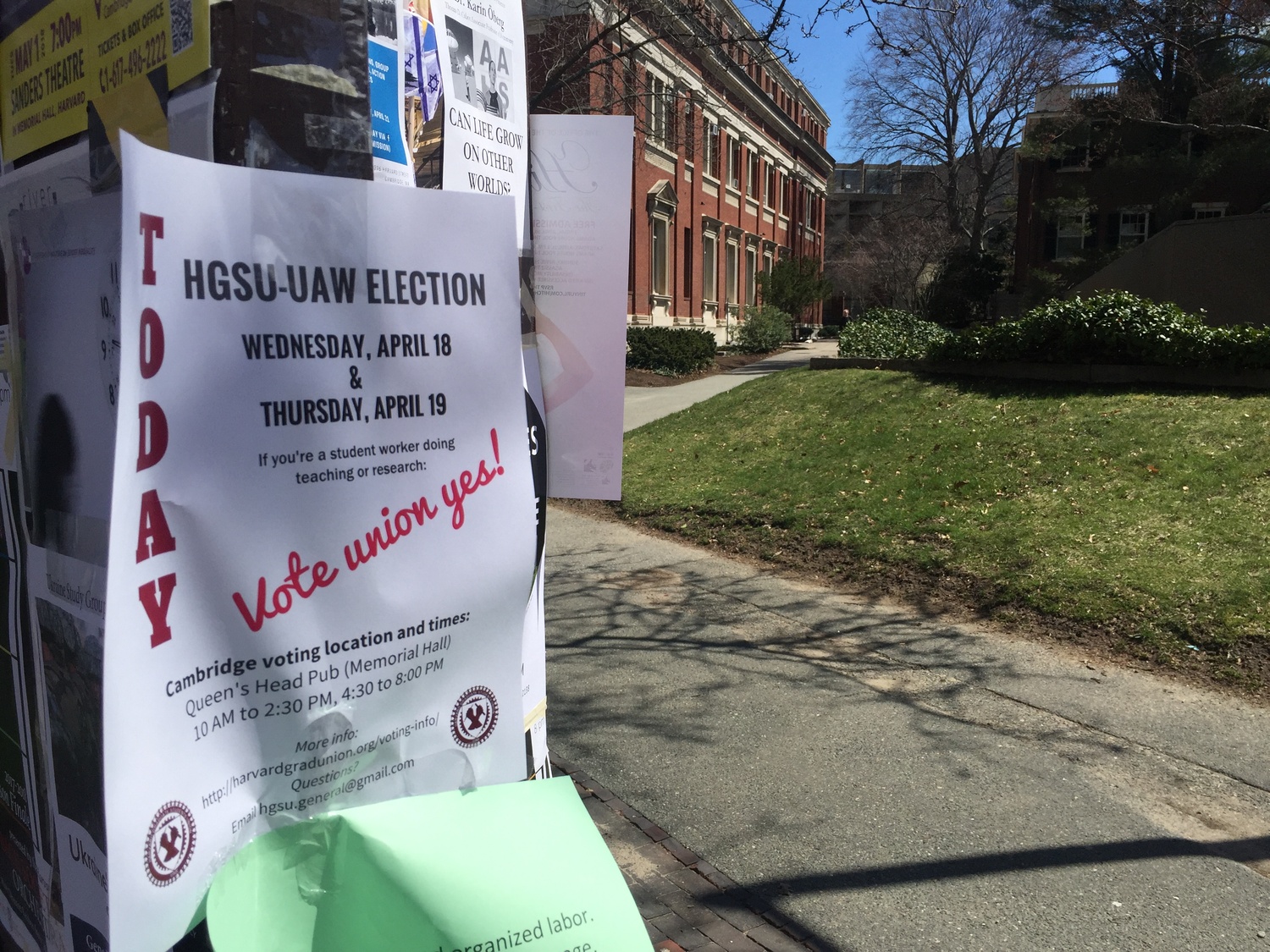 A pro-unionization poster hangs taped to a campus postering board on the first day of voting in Harvard's second unionization election. By Hannah Natanson

"I have not been satisfied by the explanations provided by the union in terms of the actual concrete benefits they'd provide, and I think it would actually deprive students of a lot of ways to communicate with the University and have, kind of, the freedom to represent ourselves," Pulice says.

April 18, 12:19 p.m., Queen's Head Pub: After a lull, the rate of voters passing through the station peaks again around noon. Several students exiting the booths outline their rationales for casting ballots one way or the other. Kevin Tian, the president of the Harvard Graduate Council, says he voted against unionization.

"I voted no because I'm not convinced I can trust the [United Auto Workers] to fairly and accurately represent graduate students," he says.

Others, though, take the opposite view. Jack M. Nicoludis, a chemistry graduate student living in Somerville and a Harvard Graduate Students Union-United Auto Workers organizer, says he would be "excited" to officially join UAW.

He notes UAW has "a lot of experience" negotiating contracts with universities and other nonprofit organizations.

"I voted for unionization," Nicoludis says. "I hope with a union we can get better wages, better healthcare, better benefits, better protect students from faculty that exploit them or sexually harass them."

Elizabeth V. Harple, a student at the Graduate School of Education, says concern for Harvard's international students prompted her to vote yes.

"I want to protect my international student friends, who face a lot of challenges," she says.

Harvard affiliates pass in and out of a voting station located at Queen's Head Pub on the first day of voting in the University's second unionization election. By Amy Y. Li

April 18, 11:45 a.m., Longwood: Voting spikes for a few minutes—up to 20 people at one time—but then slows to about one to two voters per minute.

April 18, 10:50 a.m., Queen's Head Pub: One passing student, Simos Zenios, who is pursuing a Ph.D. in Comparative Literature, says he voted for a union. "As a young person and an international student, I voted in favor because I think Harvard's benefits are not sufficient, especially in relation to health coverage for my dependents," he says. 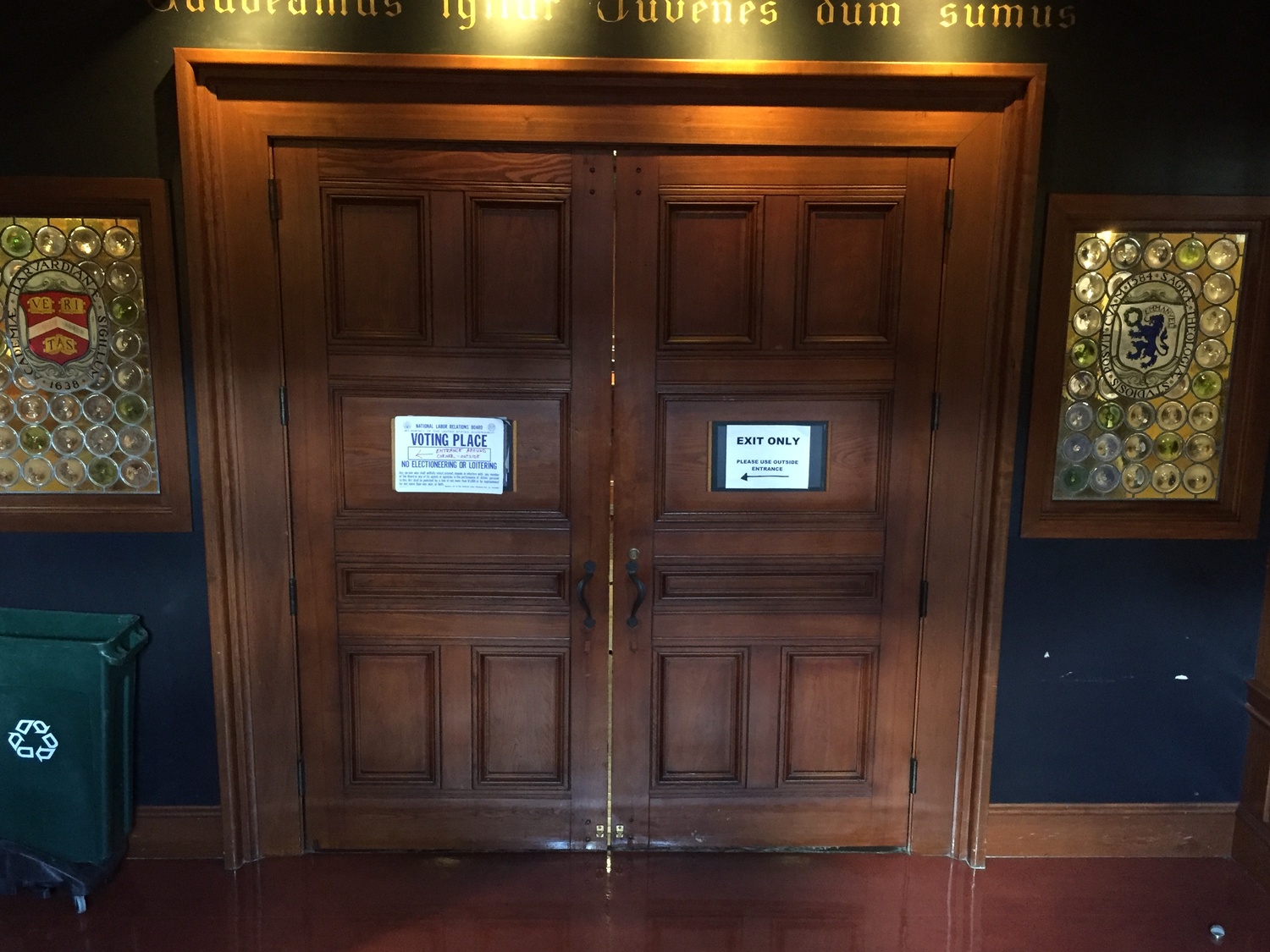 Doors conceal the line of voters inside the Queen's Head Pub during the first day of voting in Harvard's second unionization election. By Hannah Natanson

April 18, 10:42 a.m., Voting Center at Longwood Campus: Roughly 4 Harvard affiliates are exiting this voting station—located by Harvard Medical School—every minute or so. Many walk out quickly, saying they need to rush to class.

April 18, 10:30 a.m., Voting Center Near Queen's Head Pub: Roughly 10 Harvard affiliates are exiting the voting station every minute or so.