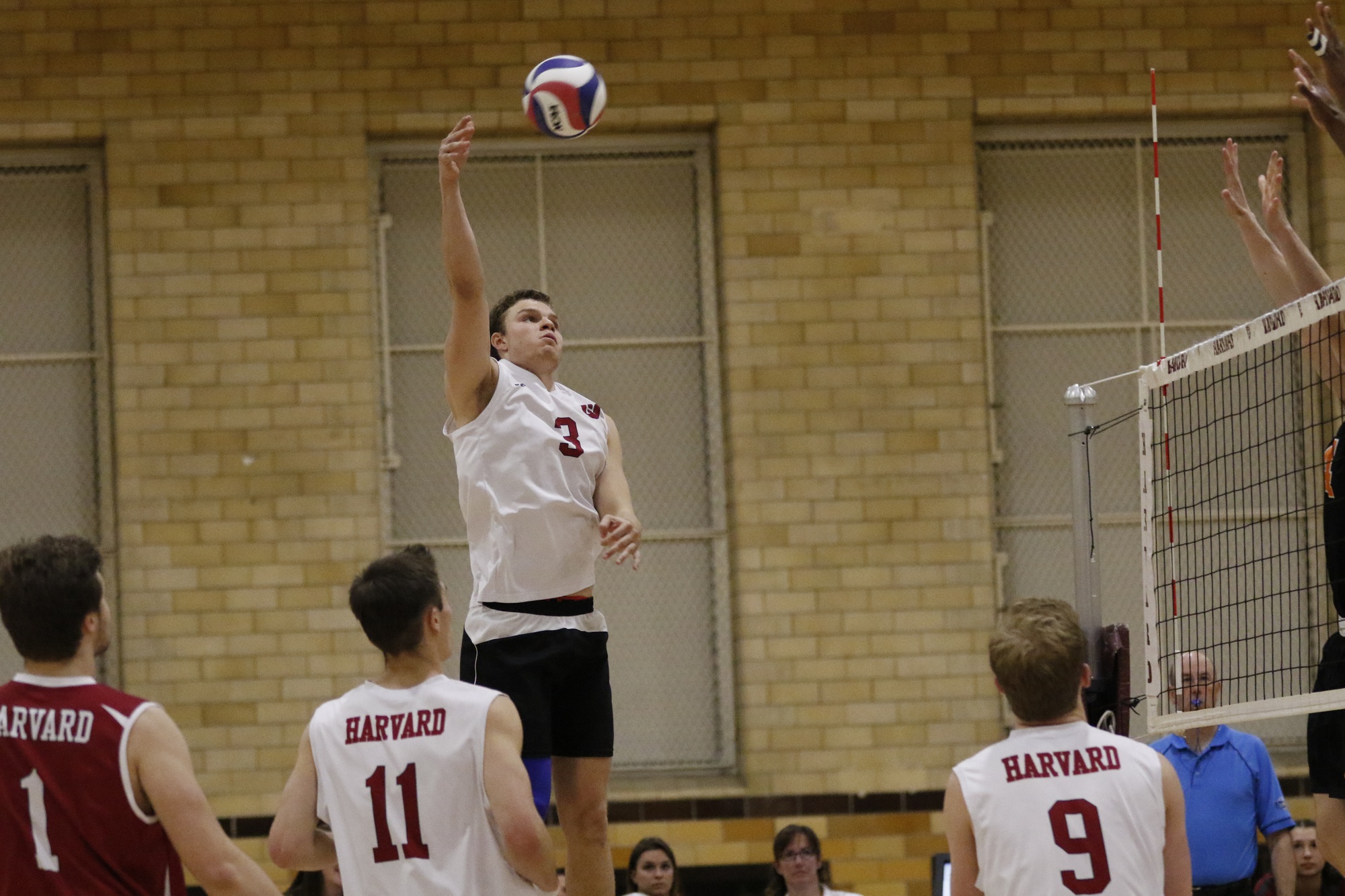 Fairfax is a modest town in Northern Virginia. Comprised of exactly 6.3 square miles of territory and home to just over 22,000 people, the suburb is most notable for being the scene of the first land battle of the Civil War. This weekend it will host another. For the first time in the division’s modern era, the EIVA men’s volleyball tournament will head to the home gym of George Mason University.

Harvard (11-13, 10-4 EIVA) is one of the four teams that will be descending on the campus in an effort to grab a contest trophy and punch it’s ticket to the national tournament. Seeded third, as determined by the team’s divisional rank in the regular season, the Crimson will square up against No. 2 seeded Penn State (15-10, 10-4) in the semi-final match Thursday at 5 p.m in the Patriots’ Recreation and Athletic Complex.

“We’re feeling confident going into what will be our third match against Penn State this year,” sophomore libero Jack Connolly said. “Coming off an exciting five set win a few weeks ago, we feel we have all the tools to compete at a high level and make a run this postseason.”

The trip South is a familiar one for Harvard, which made it less than a week ago for a weekend double-header against the now division champs. With the two ensuing losses, the Crimson ceded both the regular season title and home court advantage for the tournament to George Mason (17-11, 13-1). Now the team must return to face another familiar opponent.

The Patriots’ drought in hosting EIVA final four tournaments can be attributed to the fact that the Nittany Lions have not failed to secure a division title in 11 years. This season, however, Harvard introduced a little variation into the championship proceedings when it bested Penn State in a five set thriller late in March. The victory precluded the frequent champ from topping the podium, but as a result, forced the two into a semi-final grudge match this week.

In comparing the two teams, history clearly sides with the Nittany Lions. Throughout the course of the rivalry, the Crimson has bested Penn State just twice in 18 meetings. Prior to Harvard’s 2018 victory, it had been five matches and over two years since the squad had even managed to notch a single set on its Pennsylvania opponent.

That all changed on March 31, 2018. In front of a standing-room only crowd at Malkin Athletic Center, the five-match streak ended when the Crimson stunned the Nittany Lions in the opening set of the contest, putting up 25 before the visitors could hit 15. The next set Harvard won with 32 points. While it would take five sets to secure the win, the result was the same: Penn State was not the EIVA regular season champ.

It is only fitting that it was the Crimson that denied the Nittany Lions their first regular season title in 11 seasons. Though Harvard only boasts two wins ever against the program, the only other win ended Penn State’s deafening 51-game conference winning streak back in 2013.

Another win this year, however, is no guarantee. The Crimson’s earlier victory was preceded by a 3-0 loss to the Nittany Lions in mid-February.

“I think we had much more confidence when we played them the second time,” said captain outside hitter Jack Heavey. “We were coming off of six conference wins in a row and had really found, and played to, our identity as a team.”

While Harvard certainly has EIVA playoff experience, it pales in comparison to Penn State’s near hegemony. In his 10th season as head coach, Brain Baise has led the Crimson to five playoff berths. In the last six years, however, Harvard has advanced to only a single EIVA title match. That outlier came in 2013, the last year the squad downed the Nittany Lions in the regular season. In the proceeding championship game, Penn State disposed of the Crimson in a clean three sets.

Now the team stands between Harvard and a return to the tournament’s final match.

“We’ve been focusing both on playing our game as well as we can in addition to figuring out how we can slow down some of their best players,” Connolly said. “We’re taking this one match at a time but we believe this team is well poised to have success this postseason.”

The winner of the Nittany Lions and the Crimson will face the victor of No. 1 seeded George Mason and No. 4 seeded Princeton (11-15, 7-7). The Patriots arrive to the tournament sporting a resume of one conference loss—coming from Penn State in five sets on April 7—and a clean two-game run over Harvard last weekend. The Tigers pushed their last match with George Mason to five sets and last weekend bested the Nittany Lions in three sets before falling to St. Francis.

This season, the Crimson split with Penn State, the Nittany Lions haven’t beat Princeton, and the Tigers haven’t beat Harvard. With a Fairfax, Va., tournament on the horizon, seeds two through four are a mess. Alone at the forefront stand the Patriots with one division loss, the clear tournament favorite.