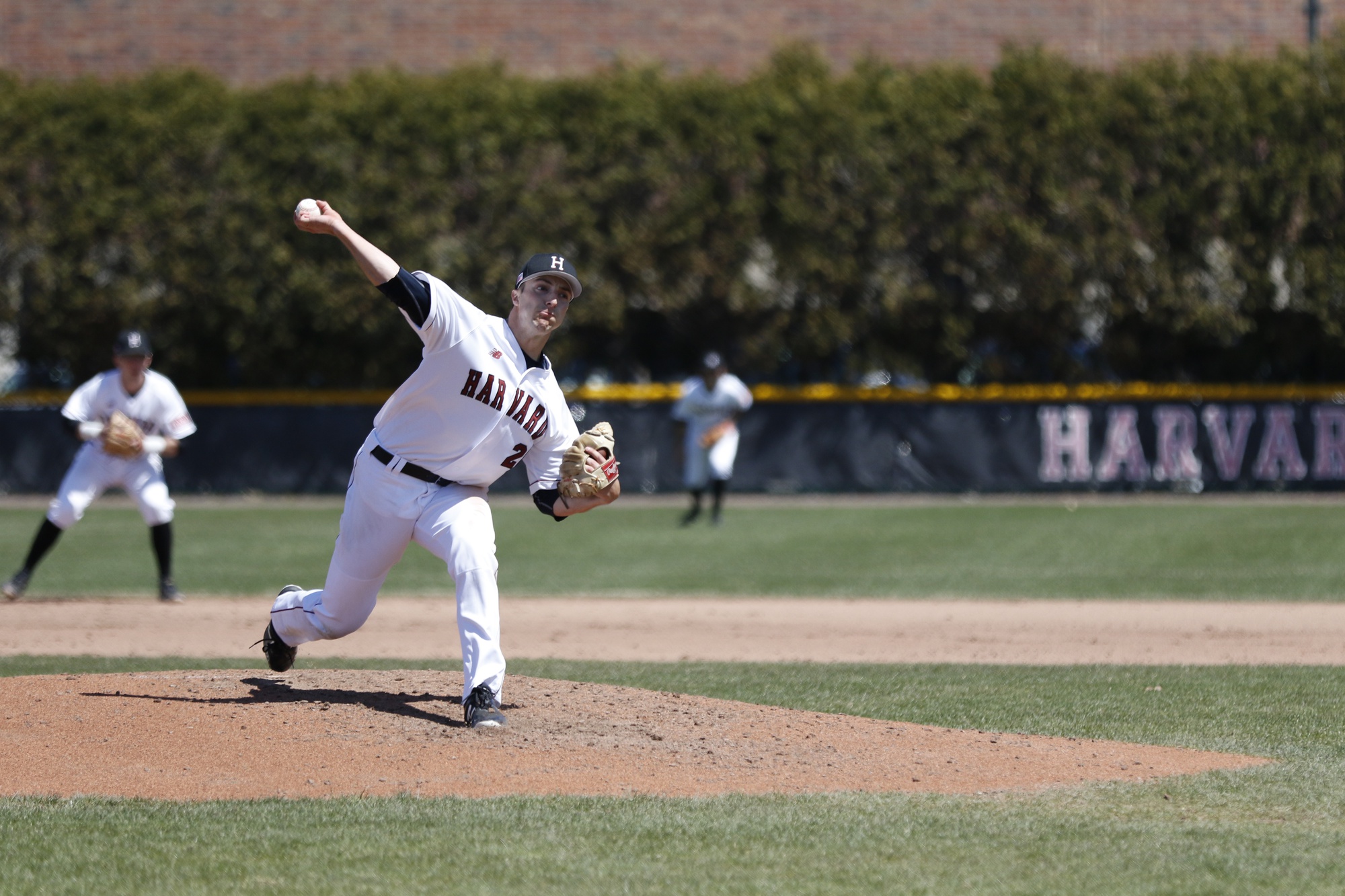 Senior Noah Zavolas continued his strong pitching this weekend, extending his scoreless streak to 24.0 innings and shutting down the Brown offense in the first game of the three-game series. By Timothy R. O'Meara
By Bryan Hu, Crimson Staff Writer

When you know you have a good team, just put your head down and go to work. The Bad Boys, out of Cambridge, Mass., know it best.

The Harvard baseball team took two of three from the visiting Brown squad last weekend, evening out its Ivy League record at 6-6 to stay alive in the hunt for the top Ancient Eight spots. The Crimson (16-17, 6-6 Ivy League) took the first two games, 3-1 and 8-7, on Saturday afternoon, before falling, 7-3, on Sunday.

The new Ivy League divisional format, unveiled this year, will pit the top two teams at the season’s end against each other in a mid-May championship series.

With just three conference series left in 2018, Harvard currently sits fifth in the standings, a game and a half out of second.

Unlike the Crimson teams of years past, the 2017-18 squad has legitimate reason to strive for more than just fifth place, as a 2018 Beanpot title and several wins over strong teams provide ample justification for placing Harvard towards the top of the Ivy table.

The team still sits in the middle of the pack, though. Series wins are a good place to start.

Senior pitcher Noah Zavolas, a week after throwing a no-hitter and garnering NCAA Player of the Week honors, tossed another gem on the mound to lead the way for the Crimson, while junior designated hitter P.J. Robinson had a good weekend at the plate, hitting 6-for-9 in the series with two RBIs, two walks, and two runs scored.

Yale looks to be sitting comfortably at the top of the table at 11-4 in Ivy play, while Columbia holds on to the golden-ticket second spot with a 9-6 record.

“We’re not at a terrible spot right now,” said junior first baseman Pat McColl. “We’d like to be a little better off than we are—I think we let a couple [games] slip through that we think we should’ve had. But if we can do all we can, win our games, we’ll see how it turns out and not worry about anything else.”

Harvard’s upcoming midweek tilt against a good Princeton team (10-17, 7-5) is a pivotal series. A sweep over the Tigers could hypothetically leapfrog the Crimson up unto a tie for the second-place spot in the standings, while a poor showing could seriously damage Harvard’s championship aspirations.

Going for the sweep at O’Donnell Field on a warm Sunday afternoon, Harvard couldn’t get late rally-starting hits to land in the right places, losing 7-3 after the Bears scored thrice in the fifth and twice in the seventh to pull away.

Establishing itself early in a series has never been the Crimson’s problem this season. In fact, against its four Ivy League opponents so far, Harvard has won the series-opener every time—some in defiant fashion, including no-hitting league leaders Yale and exploding for 11 runs on second-place Columbia.

The problem has been running out of steam and sometimes letting the series get away.

The Crimson has lost all four Ivy League series-cappers so far, a trend that Harvard will look to remedy as crunch time nears. The Crimson also lost both series to the Bulldogs and Lions despite the dominant showing out of the gates.

Down 6-0 on Sunday, Harvard still put up a fight against Brown, scoring twice in the seventh on hits by senior second baseman Matt Rothenberg, McColl, and Robinson. The Crimson had runners on second and third in the eighth and got a McColl homer in the ninth, but could only a muster a trade of tallies as it fell by four runs.

“You do all you can at those times in the game,” said McColl, who has a team-leading 32 RBIs on the season. “I think we put pretty good swings on the ball, it’s just that sometimes they fall, and sometimes they don’t—Ben [Skinner] hit one hard that just didn’t get through.”

Junior pitcher Kevin Stone got the start on the bump and pitched six innings, giving up three earned runs and striking out a trio of Brown batsmen. The loss gave the workhorse righty a 3-3 record and a 7.24 ERA in an up-and-down season, well above his career 5.53 ERA.

McColl led the way for the Harvard offense, hitting 2-for-5 with two RBIs and two runs scored. Robinson went 3-for-3 with an RBI single in the seventh.

Bears senior outfielder Sam Grigo did the most damage, driving in four runs on a three-run bomb in the fifth and a late sac fly to tack on an insurance tally.

In the Saturday nightcap game, the Crimson offense spread the wealth around in a true team effort, as the squad scattered 15 hits up and down the lineup and got the leadoff man aboard in five of its nine innings to keep the pressure on Brown.

Harvard surely needed every bit of its offensive production to take down the visitors, 8-7, despite the Bears’ late rally to knot the game at seven.

The Crimson made sure to send the Harvard fans home happy on a Rothenberg walk-off single with one out in the bottom of the ninth to score junior pinch-runner Trent Bryan from third.

“It’s always tough, but we bounce back really well as a team,” said junior righty Simon Rosenblum-Larson, who got the start and the no-decision. “I think a big difference between these guys, this year, and years past that I’ve been here, is that we do a good job of bouncing back, competing when it matters.”

After Brown put together two runs the frame prior, sophomore third baseman Hunter Bigge kickstarted the home half of the ninth with a leadoff single.

Freshman shortstop Buddy Mrowka followed through with the fundamentals, laying down a sac bunt to move the pinch-runner over.

Skinner, sporting a .400 on-base percentage this season, a .308 batting average, and a team-leading 12 stolen bases in the leadoff spot, continued to spearhead the Crimson attack, going 2-for-5 and scoring twice.

Spots three through seven in the order followed Skinner by all notching at least one hit. Seven different Harvard hitters posted an RBI. Robinson, Bigge, Mrowka, and Rothenberg all had multi-hit games.

Rosenblum-Larson struck out six in five innings of work, giving up just two earned runs and four hits to lower his season ERA to 3.21. The junior, while being the team’s strikeout leader with 10.57 K/9, also walked five batters on Saturday.

Zavolas is a man who can’t be touched right now.

The senior righty has a 24.0-inning—yes, twenty-four—scoreless streak going on right now, as he has rendered the Penn, Yale, and now Brown offenses useless in his last three outings of 7.0, 9.0, and 8.0 innings, respectively.

Shades of the dominance of last week’s no-hitter at Yale returned to O’Donnell Field, as Zavolas, now 5-1 as a starter, posted a final line of 8.0 IP, four hits, no runs, no walks, and 11 punchouts. The Acton, Mass., native threw 75 of his 101 pitches for strikes.

Three early runs were all the support that the Crimson pitching staff needed, as McColl’s third-inning RBI single and Mrowka’s two-RBI knock in the fourth stood the test of time.

Mrowka has heated up recently, as the rookie now leads the team with a .326 BA after his 5-for-12 weekend. The Duxbury, Mass., native has also driven in 12 runs on the season.

Sophomore righty Kieran Shaw got the save to close out the game, giving up just a solo shot.