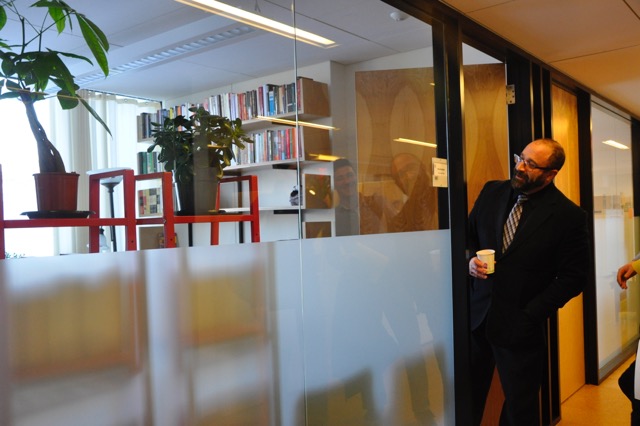 Glenn R. Magid, director of the Advising Programs Office, stepped down from his post in March after almost six years at the College. By Julia L Versel
By Cecilia R. D'Arms, Crimson Staff Writer

Glenn R. Magid, director of the Advising Programs Office, stepped down from his post in March after almost six years at the College.

Magid, who began as director in August 2012, oversaw pre-concentration and concentration advising for freshmen and sophomores at the College. During his time at the helm of the undergraduate advising office, Magid also launched several programs and initiatives, according to Brooks B. Lambert-Sluder ’05, assistant director of the APO.

“We want to thank Glenn for his devotion to undergraduate advising, and we wish him well,” Harris said.

Harvard is currently searching for candidates to replace Magid, who also served as an assistant dean of the College, and Lambert-Sluder said other administrators, including Noël Bisson, associate dean of undergraduate education, is leading the office until a successor is selected.

“In the interim, everybody’s chipped in,” Lambert-Sluder said. “Noël Bisson, who’s the Associate Dean of Undergraduate Education, who oversees the APO, has now stepped in with more hands-on leadership, over the past month or two.”

Harvard’s job posting for Magid’s position describes the primary purpose of the APO being “to maintain and improve the quality of academic advising at Harvard” by working with staff from academic departments, student affairs offices, and the 12 upperclassman residential Houses. The APO trains roughly 460 faculty members and staff who serve as freshman advisers and around 280 House affiliates who work as sophomore advisers.

Magid stepped down immediately before the College’s “Advising Fortnight,” one of the APO’s busiest times of year where concentrations host open houses and panels for freshmen to learn more about their prospective fields. Lambert-Sluder said that after the term ends, “it’s a different pace” since students are mostly off-campus and require fewer advising resources.

“There might be some new staffing that would come in over the summer, but I don’t have a sense of any actual plans there,” Lambert-Sluder added.

Lambert-Sluder called next August—before the beginning of the fall semester—“a reasonable time frame” for finding Magid’s replacement, but said it may take longer.

“These things do definitely take time, I think it’s much more important to get the right person,” Lambert-Sluder said. “I don’t think anyone wants to rush it just for the sake of the calendar.”

Magid is not the only College advising administrator to depart in the last year. In May 2017, Sue E. Brown, the APO’s associate director, also stepped down from her position after serving as a faculty member and administrator at Harvard since 1997. She left for Roanoke College to become the school’s director of academic services.