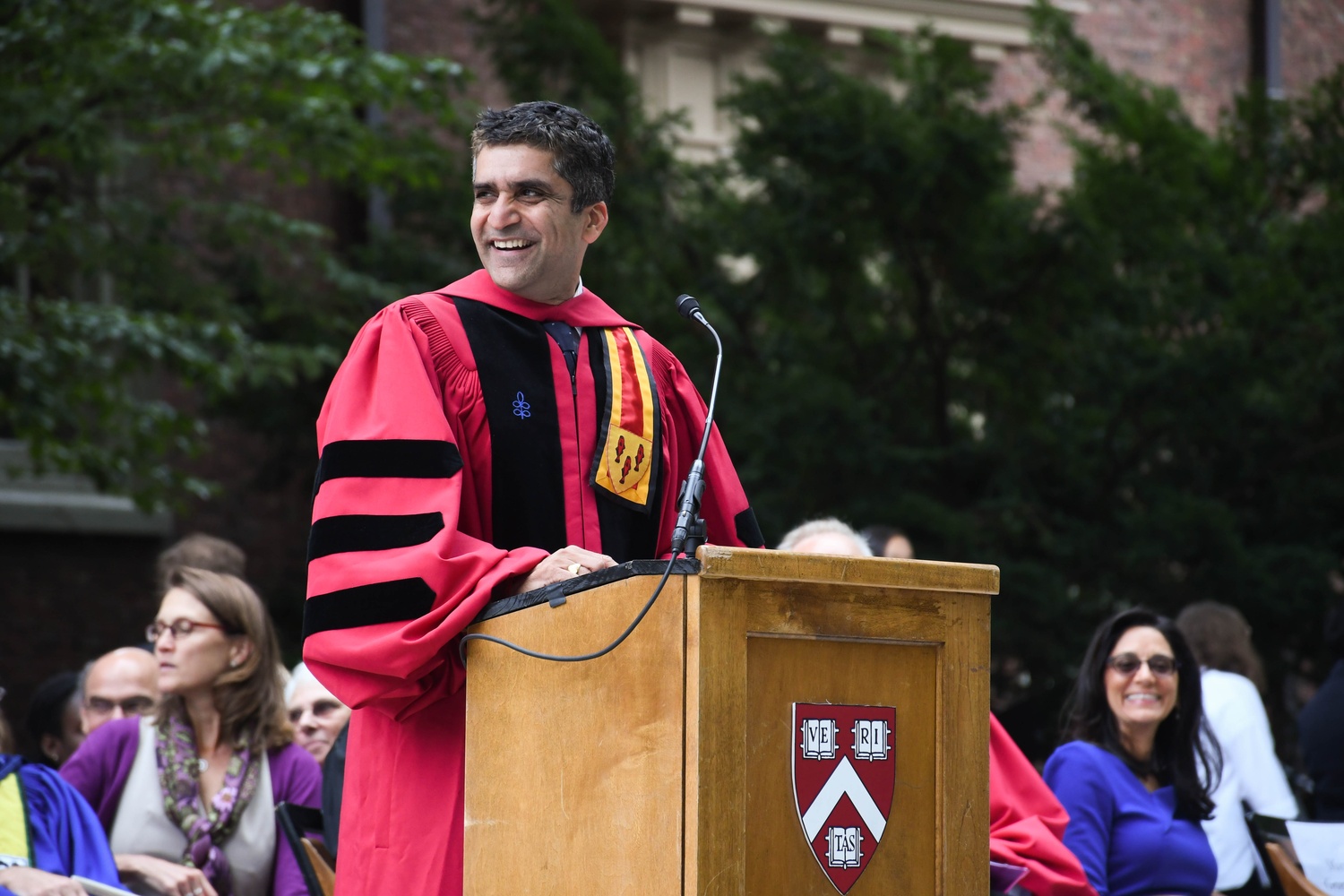 Dean of the College Rakesh Khurana at Convocation. By Megan M. Ross
By Michelle I. Gao
Michelle I. Gao ’21, a Crimson Editorial editor, lives in Adams House.

In beginning my second year at Harvard, I have spent time thinking about Dean of the College Rakesh Khurana’s advice — to choose a “transformational” education over a “transactional” one. I remember nodding along at Convocation because making that choice seemed sensible and straightforward.

A spot at Harvard provides a certain freedom from having to be transactional. For better or worse, a Harvard degree helps to alleviate the pressure to concentrate in what one thinks will be most economical. I am also lucky enough for money not to be on my mind every day. This financial privilege has been greater than I initially realized, because the college experience consists of many transactions — not just affording tuition, but also paying to eat in Harvard Square and even to print out course readings.

One can also be transactional by being close-minded. As Khurana defined it in a past Convocation speech, being “transactional” means “focusing on material goals,” like graduate school, and thinking of college as a “stop on the way to the rest of your life.” Being “transactional” doesn’t only apply to those pursuing certain fields — a subject like economics might get a bad name, but in no area is one-track mindedness useful.

In the first few semesters of college, at least, I have found it easy to avoid this transactional mindset. I didn’t come in with one burning passion. I didn’t know enough people to close myself off from the possibility of meeting more. I hadn’t planned my post-college future with any degree of specificity. So I needed to be open-minded.

If “transactional” versus “transformational” were just a binary, I would place myself in the latter category. And yet — a year in, having completed eight of the 32 (in all likelihood) classes I will ever take as a Harvard College student — I don’t think of the difference between “transactional” and “transformational” as a binary. It is more of a scale, like the five-point scales of the Q Guide. And I don’t think that I would give myself a five.

The courses that I’ve taken have undoubtedly transformed me in some way. By simply attending class, one picks up interesting lessons and comes out at semester’s end a different person than one was at the start. Certainly, though, I did more than just attend class. I liked the courses I took. I participated in them. I challenged myself in them. Yet I cannot say I wholly pursued transformation.

I explored, but I never went too far. During shopping weeks, I accompanied friends to classes that I knew I’d never take. But I didn’t change my mind while I was in them. And sure, I had not picked out all my classes before beginning shopping week. But the ones that I walked into and put on my schedule were not random classes. They were in departments that I knew I wanted to study, and they were in subjects that I knew I’d have some knowledge and interest in. For example, when a course on Chinese foreign policy did not fit in my schedule, I simply moved to a course on international relations, which was certainly not true academic exploration.

I haven’t tried very hard to find out, either. Because while I don’t think that I’ve succumbed to fears of financial pressure to choose a certain field of study or career, I have allowed unnecessary fears about time to restrict the extent of my exploration. These are fears of running out of time — the fear of wasting one of the precious four slots I have every semester, of not finishing the General Education requirement if I take too many electives, and maybe worst of all, the fear of eventually finding a concentration or passion that I love — but finding it too late to fully pursue it. These fears may feel more valid and less transactional, but they are nevertheless restrictive mental obstacles that must be overcome.

As I realize now, I have been “transformed,” but only as much as I let myself. Although that is certainly a start, it is not quite enough. Choosing a “transformational” experience requires more than just not being “transactional.” The journey is more important than the end, but I hope this realization is a step in the right direction.