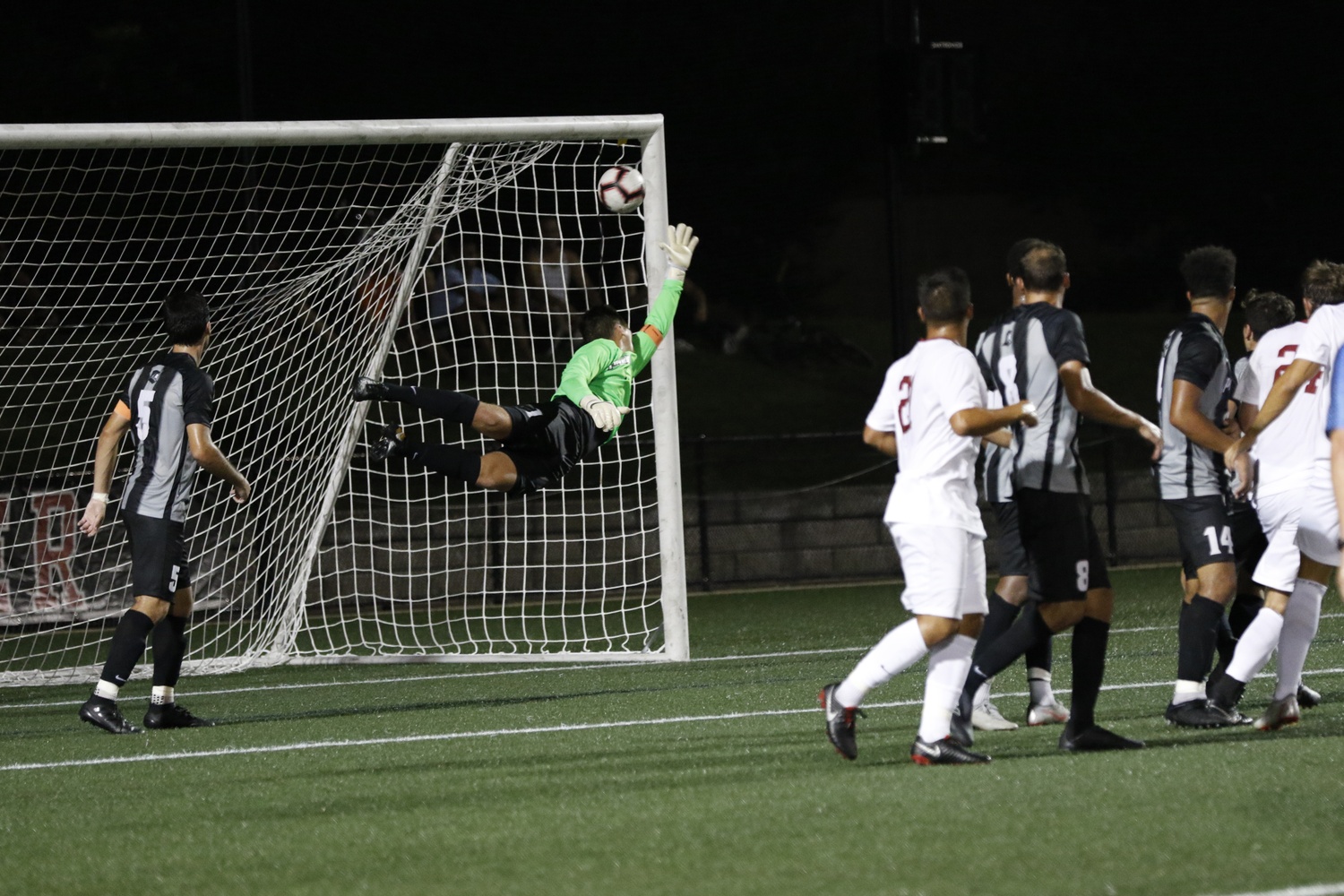 Following a tough 3-2 overtime loss in its season opener against Albany, Harvard men’s soccer (1-2) looked to bounce back as it kicked off its 2018-19 home campaign with games against Providence on Monday and No. 22 UMass Lowell on Thursday.

The Crimson came out on top 2-1 in a tightly contested match versus the Friars to start off the week, before falling 2-0 to the River Hawks last night.

Harvard is gunning for its first Ivy League championship in almost a decade, with its last title coming back in 2009.

After a thunderstorm delayed kickoff and thoroughly wet the playing surface, the Crimson fell by a score of 2-0 to UMass Lowell (4-0-1) on Thursday night at Jordan field.

Despite a promising start for Harvard, the River Hawks showed their quality over the course of the 90 minutes, with the Crimson unable to keep pace with the nationally-ranked program. Freshman forward Nico Garcia-Morillo almost found the back of the net early on, as he was played into a one-on-one situation in the third minute, but senior keeper Zach Rowell got down well to deny the striker. This early shot on goal proved to be the one of the best chances for Harvard on the night.

Harvard had stretches of possession throughout the game, mostly early on in the first half, but it struggled to apply sustained pressure on the UMass defense, rarely getting into the opponent’s 18-yard box.

“I think we started the first 20 pretty solidly,” said midfielder and captain Sam Brown. “We had the ball for a bit, they were in the same formation as us so we matched up pretty well against them. We generated some good chances in the first half.”

UMass broke the deadlock six minutes before the half through junior Roko Prsa. The midfielder rose up to meet a ball in the air with an overhead kick after the Crimson failed to clear its lines, firing past junior goalkeeper Jorma Görns to put the River Hawks ahead in the 39th minute.

Görns got to see his first minutes of the season, and the first of his Harvard career, after sophomore goalkeeper Matt Freese was forced to leave the field with an injury to his left arm in the 32nd minute. Freese came up with a big save on the ground versus sophomore Mayele Malongo before the striker clattered into him, ending his night early.

“When you have a player go down, it’s a difficult blow,” head coach Pieter Lehrer said. The goalie is a big part of your group.”

UMass started to take control of the game early on in the second half, creating a handful of chances in the first 10 minutes of the second 45. The Crimson came close to conceding an own goal after a cross bounced around the box before finally striking the post and going out of bounds to safety for a corner.

Harvard finally cracked under the River Hawks’ near-relentless pressure in the 57th minute, as Prsa bagged his second goal of the night. The midfielder put a curling free kick into the Crimson’s 18-yard box, where it skidded across the wet surface, seeming to catch Görns by surprise. With his feet not set correctly, he attempted to make up for it, getting a hand on the ball, but it was only enough to push it into the net, doubling Harvard’s deficit.

Despite being marred by an unlucky mistake after being called from the bench, Görns had a solid game in goal, coming up with important saves throughout the game, and finishing the night with 3 stops in just under 60 minutes.

The Crimson came painfully close in the 70th minute, after an early cross whipped in from the right flank found junior forward Philip Hausen at the back post. With the goal gaping, the midfielder couldn’t find the finish needed, heading into the ground rather than into the back of the net.

In the 86th minute, Harvard almost sparked a comeback through freshman forward Alex Debayo-Doherty, who split two defenders with some tricky dribbling before firing at the bottom corner from 20 yards. Rowell stretched well to deny the freshman his second goal of the campaign.

“The guys work hard, they fight hard in training,” Lehre said. “They’ll rebound well. They do a great job of seeing what they did well, what they need to improve, and making the changes and coming back tomorrow.”

A strong, disciplined defensive display from the Crimson was the difference in this one, as the hosts dispatched Providence (1-2-1) by a score of 2-1 on Monday in their first home match of the season. First half goals from sophomore forward Cesar Farias Jr. and senior defender Jack Miler proved to be enough for Harvard to seal its first win on the year.

With the temperature on the pitch hovering around 92 degrees fahrenheit at kickoff, the referee had to call for cooling breaks at the halfway point of each half to ensure the safety of the players.

While the Crimson struggled to connect its passes early on, Providence seemed to have control of the game for most of the first half. Harvard’s defense came up with some big tackles to stop Providence on the break, while Freese was kept fairly busy in the net, making 4 saves in his first career win.

The Crimson opted to attack almost exclusively by utilizing its wide men, which ended up paying off. Farias Jr. was able to break the deadlock in the 37th minute, after a beautifully placed diagonal ball found sophomore midfielder Sebastian Lindner-Liaw on the left flank. He crossed with his second touch, finding Farias Jr. at the back post, who finished coolly first-time for Harvard’s first home goal of the season.

Providence came close at a few occasions in the first half, most strikingly in the 19th minute. Freshman midfielder Kevin Vang collected the ball at the corner of the box, taking on the defense with a series of step-overs and firing a curling shot towards goal, but he was denied by the crossbar.

As the seconds ticked off the clock at the end of the first half, sophomore midfielder Paolo Belloni-Urso whipped in a corner kick, which was met in mid-air by Miler, who redirected perfectly into the top corner to grab his first goal of the season, as well as his first ever in a Crimson jersey. With just three seconds remaining at the time of the goal, Harvard went into the half up 2-0.

The youth ended up being the difference for the Crimson, with one goal and both assists coming from sophomores. Freshman midfielder Håvard Hjermstad looked dangerous whenever he had the ball on the right flank, while fellow freshman forward Debayo-Doherty put in a good shift up top.

“We’re obviously pretty young but everyone is really talented,” Brown said. “It’s early in the season so we’re still building confidence and still building chemistry. I think if we stay positive, everything will come together a little bit more.”