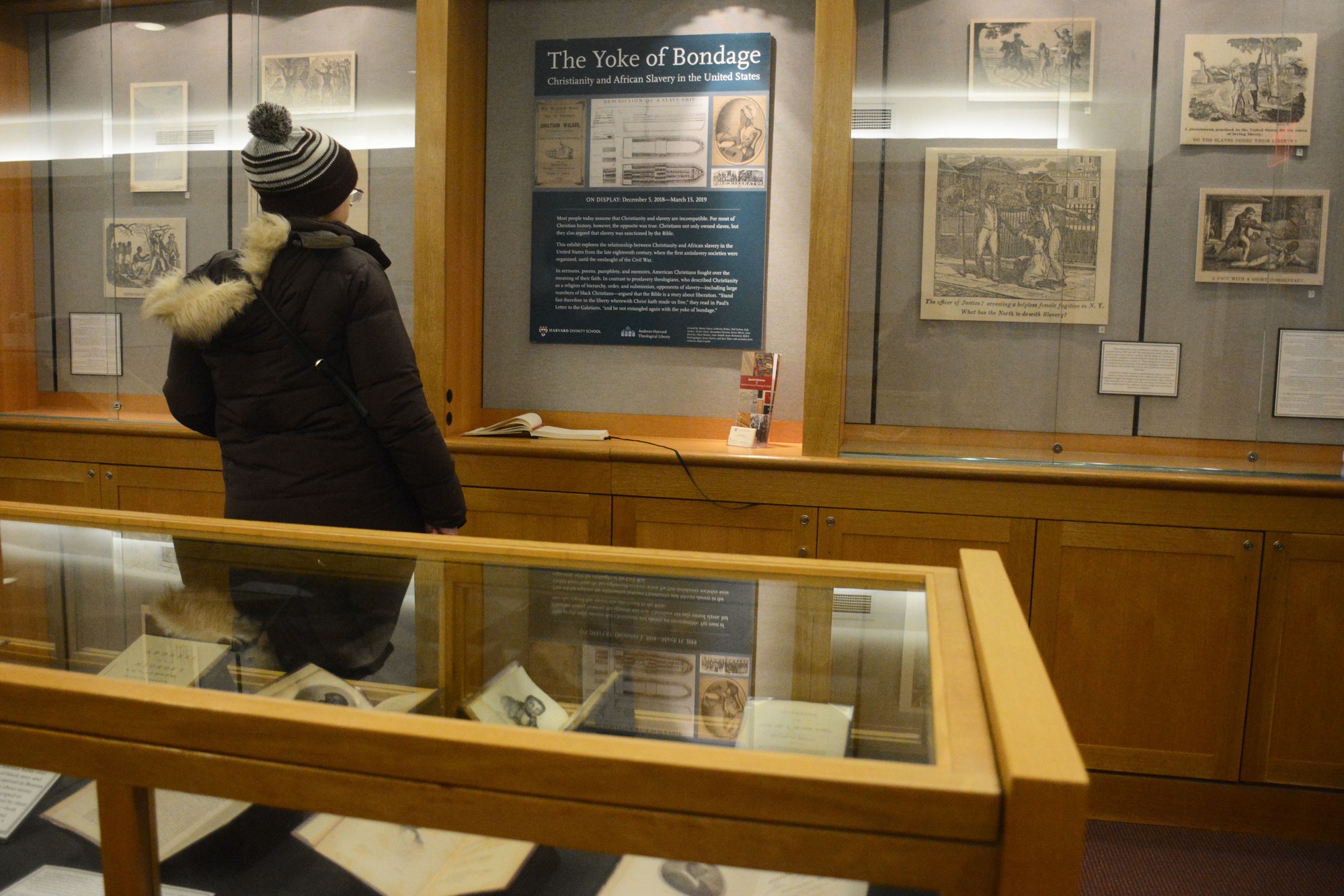 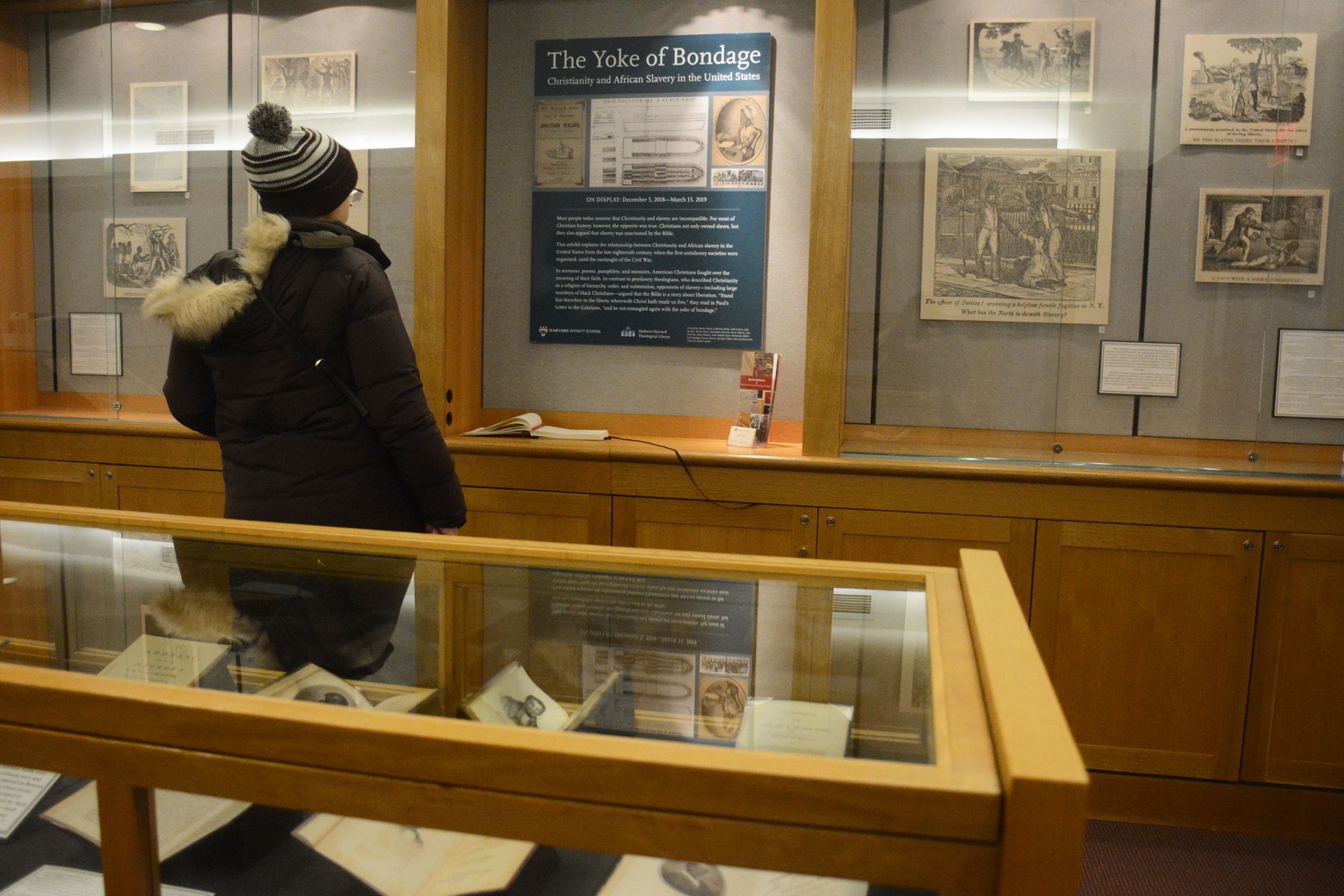 Students in a freshman seminar taught by Divinity School Professor Catherine A. Brekus ’85 curated an exhibit at the Andover-Harvard Theological Library exploring the intersection of slavery and Christianity.

The exhibit, “The Yoke of Bondage: Christianity and African Slavery in the United States,” stemmed from Brekus’s course Freshman Seminar: "Christianity and Slavery in America, 1619-1865: A Student-Curated Library Exhibit," which was taught during the fall semester. The exhibit will be on display until March 15.

This was the first time the class has worked on curating an exhibit though it was Brekus’s third time teaching the seminar. In past years, she took students to Schlesinger Library to look at archival documents.

Berkus wrote in an email Tuesday that her students appreciated working directly with primary sources.

“They reported that working with rare materials had made the history of slavery feel more immediate and embodied,” she wrote.

The exhibit, displayed on the second floor of the library, showcases abolitionist propaganda, Unitarian sermons, and testimonies of black Christians.

“I’m black and I’m Christian, and for any black Christian you have to understand the foundation of your religion,” M. Seven Richmond ’22, who took the seminar, said. “An oppressor took your ancestors out of their homeland with chains and a Bible.”

Richmond said he was inspired by the writings of escaped slaves such as Frederick Douglass. Testimonies written by black Christians sit at the center of the exhibit, serving as a focal point for the collection.

“I love to see how black people were able to redefine the religion for themselves,” Richmond said.

Brekus coordinated with Nell K. Carlson and Jessica Suarez, two curators of the Theological Library’s historical and special collections, to spend every class session in the library’s archives.

“We coordinated some of the technical parts of the exhibit, which included helping create facsimiles and bringing in a conservator to demonstrate how to handle archival documents," Carson said.

After reading 25 documents selected by Brekus, students worked both individually and in groups to research and curate items for the exhibit. Much of the exhibit is devoted to abolitionist propaganda, though a few pieces show pro-slavery interpretations of the Bible.

“Most students were drawn to antislavery texts,” Brekus wrote. “We especially wanted to highlight the testimonies left by black Christians.”

Richmond, who researched pro-slavery religious arguments as part of the seminar, said he was astonished by how slaveholders used biblical scripture.

In its captions, the exhibit emphasizes that the images abolitionists used to depict the horrors of slavery were often dehumanizing.

Djibril Rushingabigwi ’22 chose to present images from “The Anti-Slavery Record,” a collection of stories disseminated by abolitionists.

“Another picture is of a black man on the ground and a white man hovering over him with a gun,” Rushingabigwi said, referring to a still image from the collection. “It’s something that can be linked today to stories such as police brutality that could potentially be traced back to slavery.”

“There is an intermediary between the Bible and how it is interpreted, and that is the human mind,” Rushingabigwi said.

— Staff writer Matteo N. Wong can be reached at matteo.wong@thecrimson.com.