Mac DeMarco Goofs Off at The Orpheum 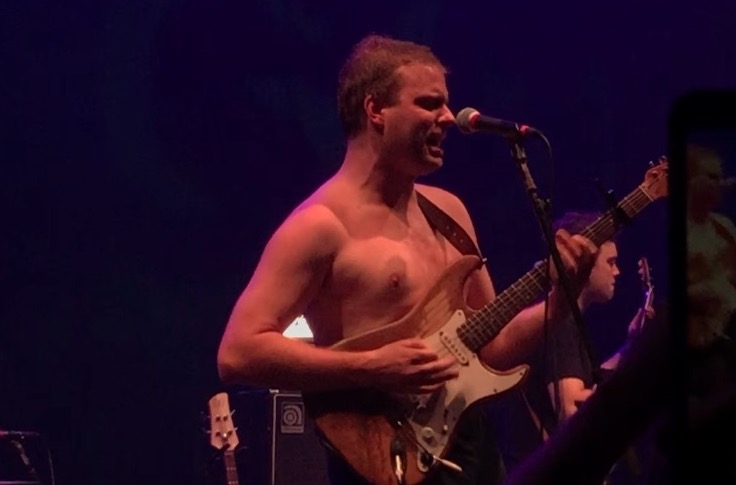 One word alone can describe Mac DeMarco’s concert at the Orpheum Theatre in Boston on Sept. 22: eccentric. Just months after the release of his album, “Here Comes the Cowboy,” DeMarco and his band performed a handful of new songs along with hits, fan favorites, deep-cuts, and unexpected covers from Metallica to The Misfits. Mac DeMarco and his goofy ensemble blended humor, charisma, and musical talent to an endlessly entertaining effect.

Around 9 p.m., DeMarco and his four-piece band walked onto a stage bathed in thick blue light, welcomed by thunderous applause. Mac DeMarco walked out in a t-shirt, a baseball cap, and his own merch — Mac DeMarco-brand drawstring shorts — proceeding to introduce the band before their monstrous 24-song set.

DeMarco accompanied their first song, the woozy “On the Level,” by prancing around stage, swinging his mic in time with the keyboard’s melody. His charisma permeated every aspect of the performance. When the band broke out into their hit, “Salad Days,” from DeMarco’s 2014 album of the same name, the crowd exploded. He whipped out an electric guitar, crooning the song’s infinitely catchy melody. For the rest of the show, he alternated between this 1970s Fender Stratocaster and an acoustic guitar, both worn high on his chest.

DeMarco’s energy was nothing short of infectious. He and his band are the kind of group that everybody wants to be in: fun, endlessly talented, and perfectly at ease on stage. They talked amongst themselves as though no one was there, yet still delivered jokes to the crowd like a comedic quintet set on desecrating Boston accents and Plymouth Rock. At times, the band would take the spotlight from DeMarco, exchanging one liners about lobster rolls — “the most ancient of all fish” — and ex-members of the band. At others, DeMarco went off on entertaining tangents.

In the first of many such nonsensical soliloquies, Mac indulged the audience with a memorable take on rings: “I’ll tell you the truth about me and rings. There’s something wrong. You know the sexy people, sexy men that wear rings like Johnny Depp or some shit,” he said. “Damn, he looks like a pirate, it’s crazy. I put one on and there’s something wrong with the room immediately.”

At 10:30 p.m., lead guitarist Andy White remarked that it was past their bedtimes, but their energy seemed endless and the quality of their performance never wavered. DeMarco refused to stay in one place. Instead, he opted for Gollum-like stomping, handstands, and strange noises, to which the crowd would respond with louder cheering. At one point, he partook in a solid minute of back and forth growling with the audience. Every song sounded like warm honey, breezy and perfect for swaying and holding up a lighter — or, more accurately, an iPhone flashlight.

“Choo Choo” from “Here Comes the Cowboy” was wonderfully funky live. DeMarco was quick to encourage dancing, saying, “If you wanna shake your butt around, go ahead.” He proceeded to do so himself. The band stripped down the song “Still Beating,” rendering it especially heartfelt. During “Another One,” Mac DeMarco asked for the house lights to turn on so he could see the whole crowd. About a third of the way through the song, when the obligatory iPhone flashlights once again lit up, he ordered the stage lights off, leaving the audience totally exposed. It was in many ways an equalizer, a blurring of the lines between performer and audience. In that moment, the concert felt intimate, like being let in on a secret.

The seven-song encore was the height of eccentricity. DeMarco underwent a costume change. After leaving the stage briefly, he reappeared wearing his shirt on his head like a makeshift Pharaonic headdress, crouching behind the amp while his band began to play the solo from Kansas’s “Carry on Wayward Son.” Herman’s Hermits’ “I’m Henry VIII, I Am” was also given the star treatment in a particularly energetic performance. For their renditions of The Misfits’ “Hollywood Babylon,” “Where Eagles Dare,” and “Hybrid Moments,” the whole band switched instruments, with White assuming the role of the quintessential rock n’ roll front man. “We’re gonna start a Misfits cover band on the breaks from this tour,” they announced. White resumed with the sarcasm he had adopted throughout the show:

“I appreciate the applause but I did ask all you guys to be quiet. Please be respectful,” he said. “The way I’m feeling reminds me of when Jesus was on the cross. When he was like, ‘forgive them father they don’t know what they do.’ That’s how I feel right now.”

They closed the mammoth show with Metallica’s “Enter Sandman,” dedicated to their “best friend in Boston, taken a bit too soon…the world’s greatest FBI agent, James ‘Whitey’ Bugler.” It was a perfectly enigmatic ending to the show, complete with a powerful slap-in-the-face delivery from DeMarco. After his whirlwind of a concert, DeMarco left the audience with a deliberately nonchalant message sure to remain in their memories: