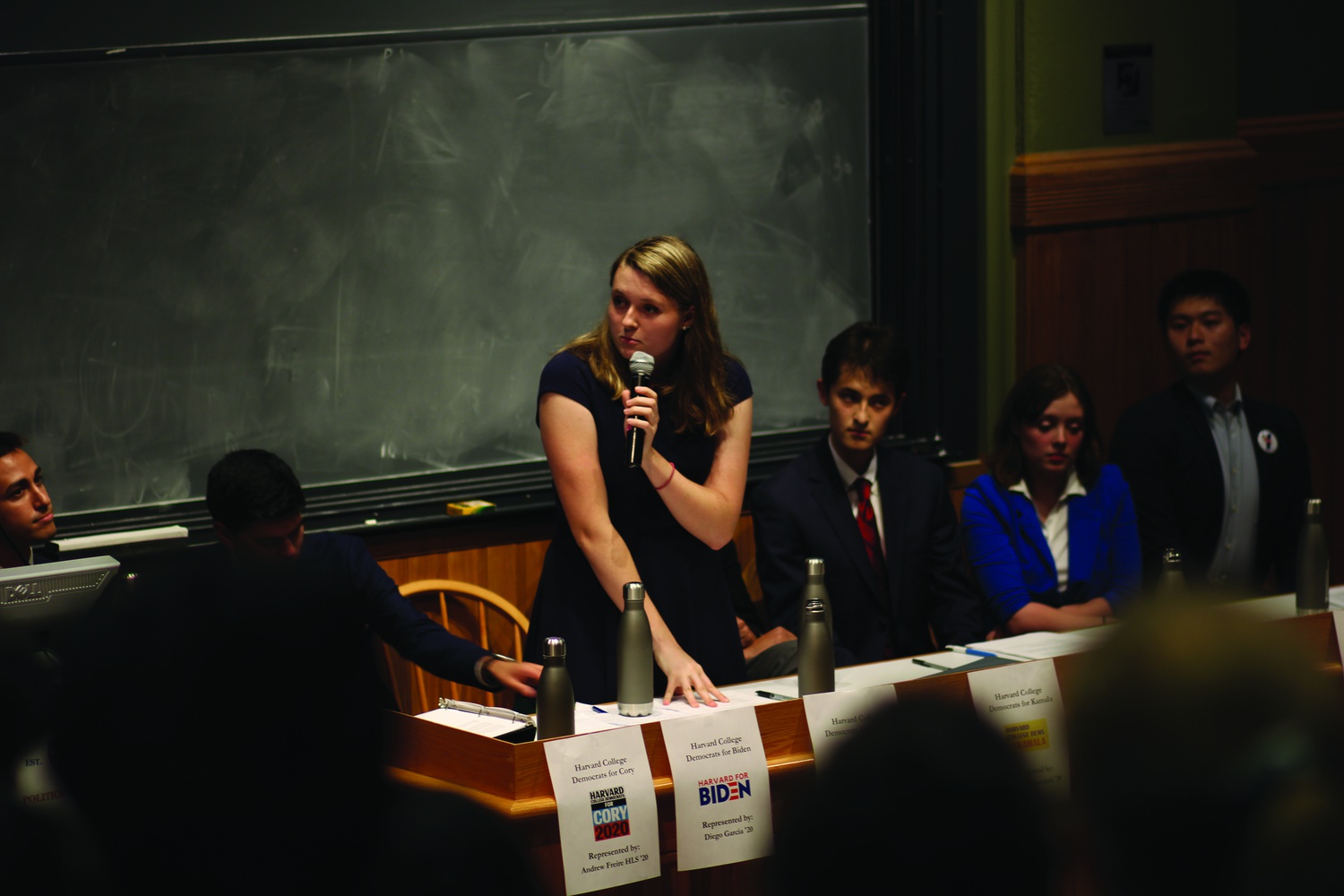 The attendees watched as the candidates — including frontrunners Joe Biden, Warren, and Sanders — debated on stage in Westerville, Ohio. The candidates discussed a range of topics, including the impeachment inquiry against Donald Trump, healthcare, income inequality, and gun control.

Esmail Fadae, a software engineer at Harvard Business School, said he frequently attends debate watch parties because he enjoys seeing how others react.

“You get the crowd reactions from people [and] hear what gets applause,” Fadae said. “It’s one way to get a sense of what other people are interested in and what they are passionate about without necessarily having those conversations.”

Though there were designated tables at the event for many of the frontrunners, a table for Biden was missing. A Monday poll by Quinnipiac University shows Biden polling in second place at 27 percent, behind Warren.

When asked about the absence, Harvard for Biden member Diego A. Garcia ’20, said he does not believe it indicates a lack of support for Biden among Harvard affiliates.

As the debate wore on, the issues of gun violence and income inequality proved to be particularly salient among the crowd.

One of the largest applauses of the night came when former Secretary of Housing and Urban Development Julian Castro said, “Police violence is also gun violence.”

Warren’s answers about cutting down the number of billionaires in the U.S. were also met with applause from Harvard affiliates. Throughout the debate, other candidates maintained a more aggressive stance toward her as a result of her rise in the polls.

Many event attendees said that they were decided beforehand and that the debate did not impact their position. Several people departed the watch party halfway through the event, leaving the auditorium half-empty long before the debate ended.

“I don’t think debates are always the most productive forum for doing that but they do give us a chance to think about issues that really matter,” Natalie I. Swartz ’20 said.

Several people said they did not find the debate helpful due to the number of candidates on stage. Tuesday’s event marked the largest debate yet; the past three Democratic presidential debates had at most 10 candidates on the stage at a time.

“Klobuchar, Booker — are they polling well enough to, do they have a real chance?” Fadae said. “Or are they just drowning out discussions that people need to hear from the candidates who are the frontrunners and who still have a solid chance at placing?”

Though the debate grew heated at times, candidates repeatedly stressed the need to unite against President Donald Trump’s chance of winning a second term — a sentiment some debate viewers shared.

“Any of these candidates would serve our country better than our current president,” Swartz said.