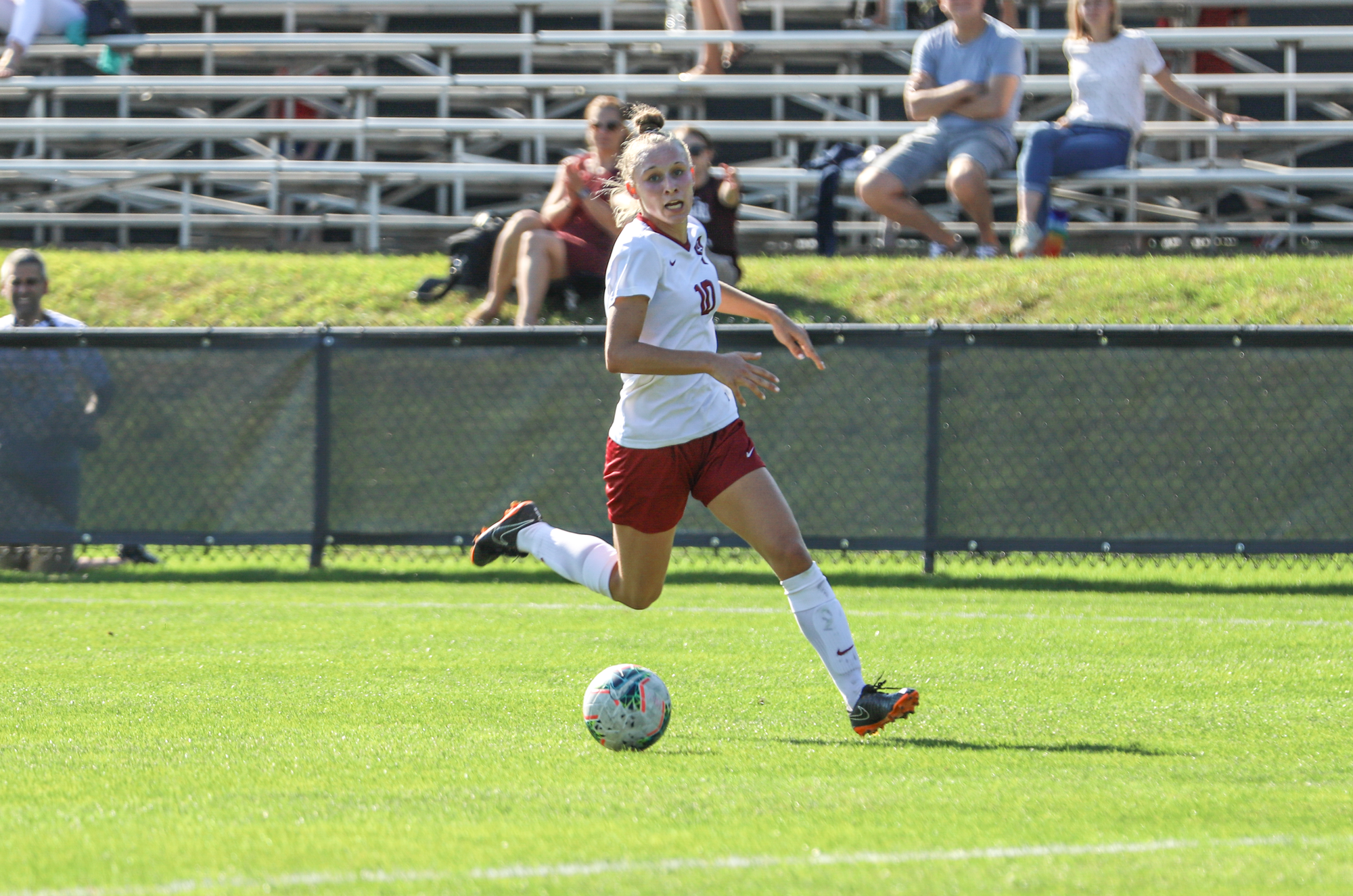 Freshman Angela Caloia approaches the net for the Crimson. The first-year was one of two players who scored in the team's loss to Brown Saturday. By Quinn G. Perini
By Lev Cohen, Crimson Staff Writer

Harvard women’s soccer dropped a crucial home game on Saturday afternoon, falling, 4-2, to Brown in a battle of the last two Ivy League unbeatens. The loss snaps a seven game win streak for the Crimson, which had kept five consecutive clean sheets since last giving up a goal a month ago.

In none of those five games did Harvard (10-3, 3-1 Ivy) have to deal with a team as athletic or physical as Brown (10-1-1, 4-0). The Bears peppered the box with dangerous crosses and crashed the net. They put pressure on senior Crimson goalie Kat Hess and scored on two set pieces and two rebounds off of Hess parries.

“Each team has got their strengths,” Hess said. “They’ve definitely got their height and athleticism in the air and that’s something that’s been good for them this season.”

Brown’s senior midfielder Abby Carchio was the straw that stirred the drink for the Bears for much of the afternoon. Her corner in the fifth minute was deposited into the net by sophomore forward Rebecca Rosen, whose uncontested header punctuated an excellent start to the game by the visiting team and quieted the announced crowd of 634 at Ohiri Field.

Carchio was also the catalyst for Brown’s second goal, which came with just seconds to go in the first half and broke a 1-1 deadlock. Her ball into the box was punched out by Hess, but right to the foot of senior midfielder Celia Story, who made no mistake and fired into an empty net to deflate a Harvard team that had clawed back into the game after starting slowly.

“I think we had the momentum at that point,” head coach Chris Hamblin said. “We had created a lot of chances, we had more of the ball, so I think it was a challenging time to concede. And the nature of the goal was challenging, because we thought our goalkeeper came out and made a fair play on the ball and then was hit late, which allowed their player to hit the ball into an empty net. To get scored on against the run of play on what we thought was a foul, that does leave a bad taste in your mouth as coaches and as players. So we had to reset ourselves and come back out, and that stinks, because you’re riding the momentum, and you want to go into the second half at 1-1, so that goal definitely was a punch in the gut for sure.”

The game was put to bed in the 58th minute, when Brown’s humming attack hammered home two goals in 17 seconds of play, stunning the previously stout Crimson defense. First, another Carchio set-piece, this time a free kick, was finished by junior forward Star White, who had created an inch of space for herself in the box.

“In the second half I thought we came out with the right mentality but gave up another set piece goal,” Hamblin said. “When you’re giving up goals on set pieces like that, you just put yourself behind the eight-ball.”

The Bears extended their lead to three when an excellent through-ball behind the Harvard defense found Brown’s leading scorer, freshman forward Brittany Raphino, who pounced on the rebound of her saved shot and finished past the Crimson’s goalie with her second effort.

Harvard did show off its offensive firepower against a Brown team that had conceded just three goals on the year. The Crimson started slowly offensively but capitalized on a free kick in the attacking third to tie the game at one in the 20th minute. Freshman Gabby DelPico found freshman Angela Caloia with the free kick, and the U19 Italian National Team forward volleyed the ball into the back of the net from close range.

The link-up between the freshmen was nothing new, as by the NCAA’s point-tabulation system, which gives two points for a goal and one for an assist, they rank first — Caloia, with five goals and 10 assists — and second — DelPico, with six goals and five helpers — in points on the up-and-coming Harvard team.

The game opened up after the intermission as the Bears and Crimson took 12 and 11 shots at goal, respectively, in the second half. Just minutes after Brown’s back-breaking two goals in 17 seconds made the game 4-1, explosive junior attacking midfielder Murphy Agnew received the ball in space, drove the ball at the defense, and took a shot from outside the box that bounced off the bottom of the crossbar and somehow did not go in.

It was another reminder of Agnew’s talent, and Harvard will hope she is able to return to the lineup next weekend after she hobbled off the field in the 79th minute with an apparent leg injury. The New Hope, Pa., native missed two games earlier this year due to a leg injury.

After Agnew hit the bar, the Crimson continued to pour players forward as it sought a way back into the game. Harvard eventually did get a second in the 89th minute, as another DelPico set-piece — this time a corner — led to a goal, this one off the head of junior defender Cammie Dopke. But it was little more than a consolation on a tough day for the Crimson, which falls into a tie for second in the Ivy League, a game behind the Bears.

The fact that these two teams were battling for first place midway through the league season speaks volumes about the directions of the two programs. They each finished .500 overall last season and were in the middle of the pack in league play. But both programs got infusions of talent, with freshmen like Caloia and DelPico on Harvard’s side and dangerous freshmen forwards Raphino and Ava Seelenfreund on Brown’s.

“I think if you look at the games we’ve played over the last four or five years, we’ve had ties, we’ve had come-from-behind victories for us, obviously a victory here for them, so I think it’s been back and forth over the last few years,” Hamblin said. “I think some of the better players on Brown are their younger players, I think we’ve got a lot of talented younger players — I think the league in general is getting better, so I do see both teams being successful. I think this is a good lesson for us, though, and we need to do a better job playing against physical teams. We’ll figure that piece out.”

The Crimson will look to rebound next Saturday when it hosts Princeton, which was the Ivy League’s NCAA Tournament representative last season but is just 1-2-1 in league play this season.