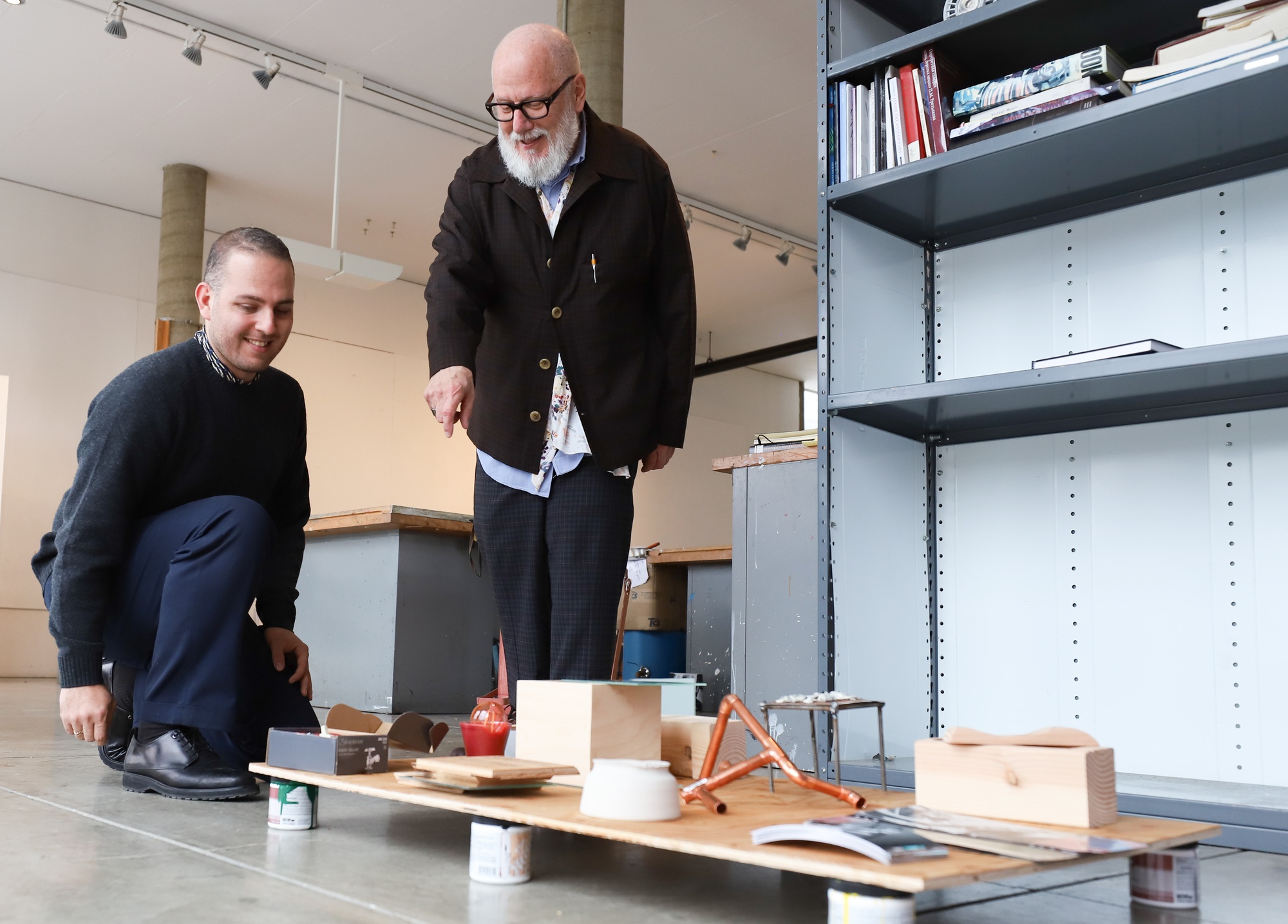 The Art of Loitering

The cultural work produced in the class ranges from oil paintings to playing the same note on the Sitar for an hour.
By Garrett W. O’Brien

Stephen Prina trudges up the five stories of the Carpenter Center for the Visual Arts and sits down in what he calls his “loitering space.” Wearing a color-coordinated outfit — blue jacket, blue sweater, blue shirt, and a blue and yellow scarf — he welcomes me into the “loitering space,” a normal room containing a table with eight chairs around it. He places his notebook on the table in front of him and says, “I think that in all disciplines, it’s absolutely necessary to know how to loiter.”

Prina teaches Art, Film, and Visual Studies 80: “Loitering: Studio Course.” The class “hangs out in the vicinity of culture” and reacts and responds to the environment around them in order to produce “cultural work,” according to its course description. The work the class produces ranges from photography and video installations to “civil disobedience as performance,” Prina says.

At first, it may seem as though Loitering is a masterclass in artist creativity and creation. Prina, however, hates what he calls the “C-word” — creation. He asks his students not to create, but rather to respond to their environment. He believes that “anytime [students] make a mark on something, there is a precedent that is established in history that they can consider.” His class is an exercise in reaction rather than invention.

He first made the class, he says, in order “to respond to Harvard culture,” to provide an alternative to “the goal-oriented strategies” that the people at this university often hold dearly. Although he “would never ridicule” the goal-focused mindset of the institution, he holds that “these people don’t know how to loiter.”

Loitering, to Prina, is “the idea of slowing down, relaxing the focus upon the goal. And being in the moment.” He uses loitering as a “conceit” to share with students the “materials” to make art.

But Prina only recently started using the word “art.” He did not “think it was useful” as a term to describe the process of cultural production. So in his class, he says he does not “care if they make art or not” — students in the class can make whatever they want. The cultural work produced in his class ranges from oil paintings to playing the same note on the Sitar for an hour. Prina says all he wants is for his class to “leave with a sense of pleasure in the things that they've made,” and to understand that “when they jam materials together, it’s actually linked to cognitive thoughts.” He wants to soften the hardwiring that compels students to move at one hundred miles per hour, to encourage them to slow down and explore the “rough edges” of their work. 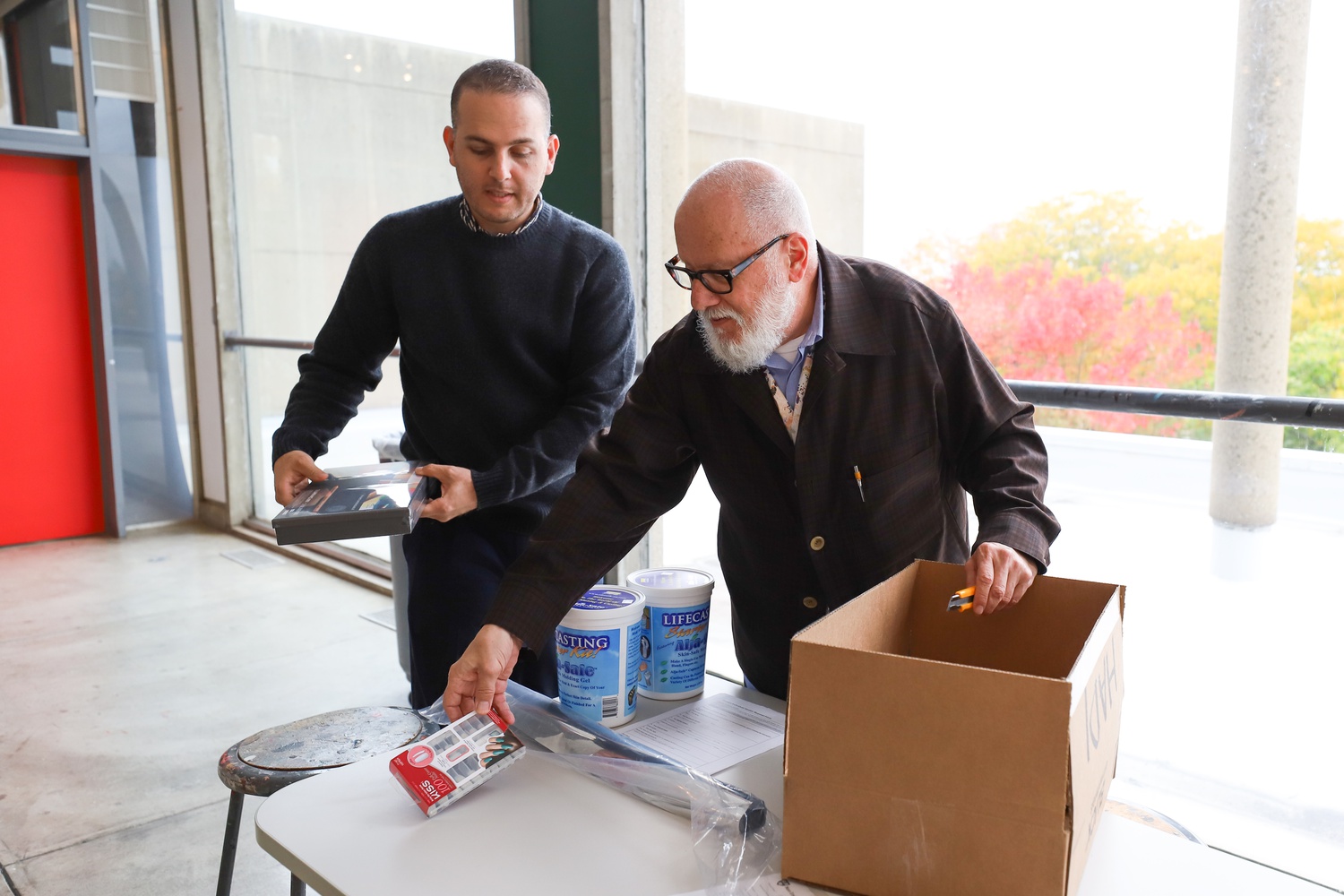 Prina is not a big fan of another “C-word,” this one being critique: the process by which students in most AFVS courses analyze one another’s work. He says he has no interest in having people use their “newly found intelligence to beat other people into submission” and force them to abandon the dissonance found in their work in order to make it “conventional, more normative.” He wants class members to embrace their deviations from convention.

“A lot of what I do with my approach to pedagogy is that I focus upon an apathetic moment or crisis moment or a trauma moment that I have had, and I want to share that in some way with my students,” Prina says, “because that accelerates their moving from point A to point B.”

Prina says he cannot teach his students anything. This nuance in his pedagogy allows Prina to be “like any other spectator” simply viewing a piece. He believes that his “non-expertise viewpoint” allows students to break the mold they have been stuck in throughout their academic careers.

Prina does not want Loitering to be comfortable for his students. When discussing his resentment for the comfortable, he evokes the words of the French philosopher Roland Barthes.

“Roland Barthes’s book is sitting over there,” he says, pointing to a book at the end of the table. “He was known to say that ‘I’m not interested in comfort in art. I don't look for comfort in art. I look for jouissance’ — he wanted to have an orgasm. He's looking for orgasm in art, not comfort. And I think that that's very, very important.”