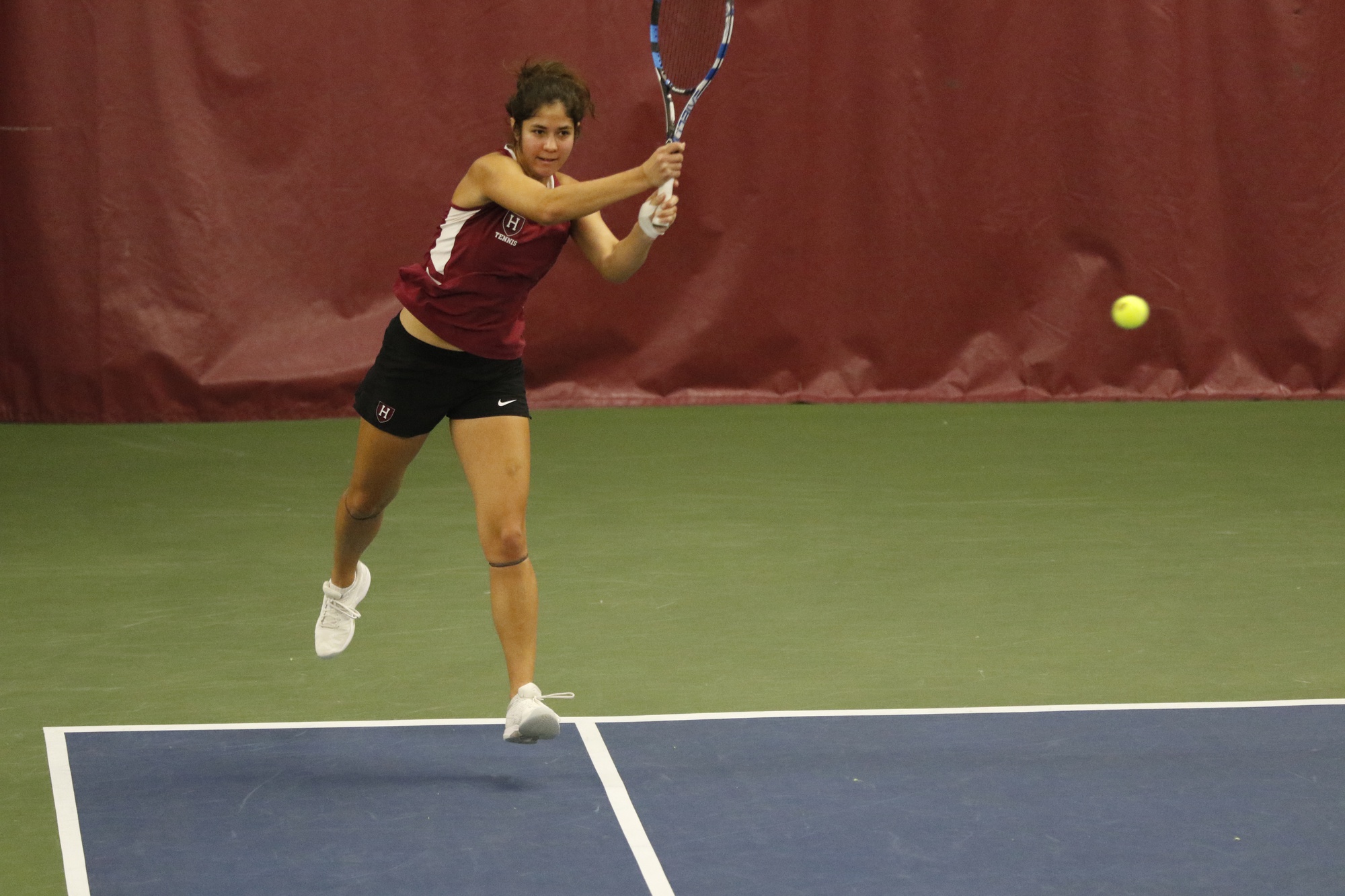 Senior captain Natasha Gonzalez competed in doubles over the weekend with sophomore Rachel Lim in an impressive showing.
By David Aley, Contributing Writer

It is hard enough to match up against some of the best tennis players in the country and perform at an elite level, but it is even harder when the conditions for playing are windy, rainy, and close to freezing. But these challenging conditions barely slowed down Harvard’s men’s tennis team this past weekend at the ITA Northeast Regionals at the University of Pennsylvania in Philadelphia, Pa.

The Crimson were led by two first-years, Ronan Jachuck and Henry von der Schulenberg, who advanced to the semifinals and quarterfinals of the tournament, respectively. Injuries to some athletes and a few logistical issues resulted in only the pair of first-years staying for the entire weekend.

The erratic weather made the tournament quite difficult, as matches each day alternated between being indoors and outdoors, depending on the conditions of the day. Jachuck mentioned that although conditions were far from ideal, he was still able to find his groove.

“The first day was difficult because it was really the first time hitting the courts [at Penn], and it was tough to get my rhythm in the first match,” the first-year said. “Once I got through that, though, I started to feel pretty good and had two matches on the second day. After that, I was matched up and ready to go, which led to my best match on Monday.”

The Crimson athlete squared up against a familiar opponent, Princeton sophomore Karl Poling, who he had known and played against at tournaments in New York since he was around 11 years old. It was this sense of familiarity that made Jachuck even more locked-in and ready to go. He defeated Poling in straight sets, 6-4, 6-3.

The other Harvard first-year, von der Schulenberg, won his first three matches against athletes from Buffalo, Princeton, and Columbia, eventually advancing to the quarterfinals before falling to Dartmouth senior Charlie Broom, 7-6(5), 6-2.

In the semifinals this past Tuesday, Jachuck faced off against a Columbia senior, Jackie Tang, but eventually lost after a long battle, 6-4, 7-6.

Jachuck noted that the team’s camaraderie and mindset has grown tremendously since the start of the year.

“I think in practice we all compete really well; we all have similar levels,” Jachuck said. “When some of us have success, like this past weekend, it’s really good to see and we all really like to push each other in that way.”

Although it has been the first-years who have stepped up and capitalized on their opportunities so far this year, everyone on the team, Jachuck says, has been a leader because of the high standards they hold each other to and the mutual respect they have for one another.

Next up for the Harvard men is Chowder Fest, the final tournament of the fall season, held at home in Cambridge starting on Nov. 8.

Gonzalez and Lim competed together in doubles throughout the weekend, beating teams from Brown, UMass Amherst, and Boston University 8-6, 8-4, and 8-6, respectively. The duo then faced off against another pair from Columbia in the quarterfinals, eventually being eliminated 8-2.

Marculescu noted that the quarterfinal performance, in particular, was incredible to watch, as it was the first time this season that Gonzalez and Lim competed in doubles together. Marculescu, who hails from Romania, competed twice in singles herself, defeating Columbia first-year Michelle Xu 6-1, 6-1, before falling to Yale junior Caroline Dunleavy 6-3, 6-3.

Marculescu made sure to mention that although the level of play at the tournaments has been quite high and she has been challenged greatly, her overall transition to playing in college has been fantastic.

”I’m not used to having so many people supporting me, but [Gonzalez, Lim and the coaches] helped so much,” said Marculescu of her showdown with the Columbia athlete. “I managed to play at my best, and that match went really well for me.”

Marculescu also noted that the team has already grown significantly this year, as they have developed their support network and increased their respect for each other. These qualities have allowed the players to flourish and become forces to be reckoned with.

The Harvard women are close to wrapping up their fall season, with one final tournament at home on Nov. 1 for the Harvard Invitational. The team looks to continue its success, and if they continue their upward trajectory, success seems to be well within reach.