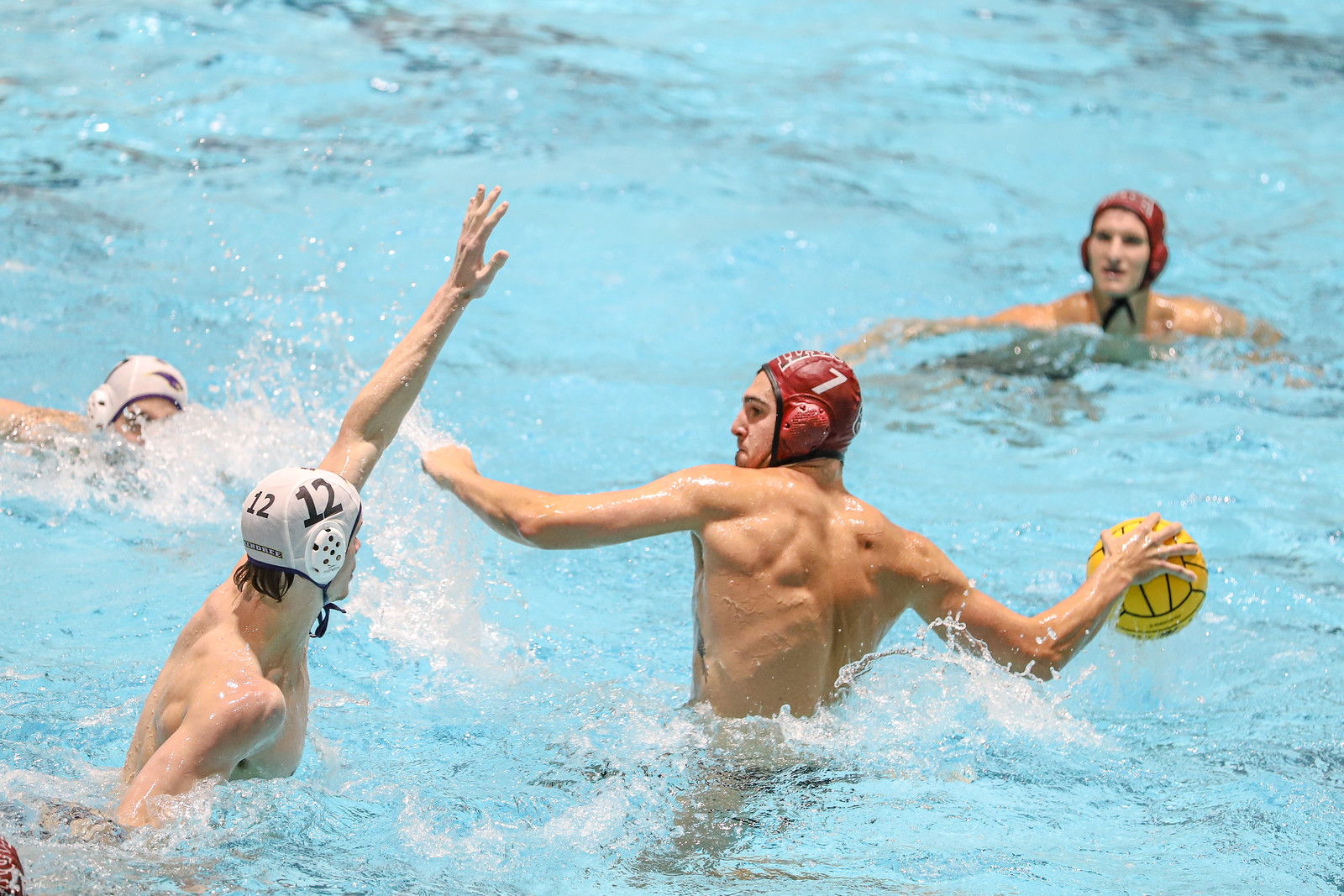 Harvard extended its win streak to 22 this weekend following a road trip to California. At 22-0, The Crimson is the only remaining undefeated team in the CWPA. By Quinn G. Perini
By Eliot Min, Contributing Writer

With the clock winding down and the score tied at 13 against George Washington University, Harvard men’s water polo needed some magic to keep its winning streak intact. Senior Austin Sechrest delivered the goods for Harvard, forcing a late turnover that junior Bruno Snow converted into the decisive goal with 43 seconds remaining. The goal handed Harvard a 14-13 victory and extended their winning streak to 15. Senior Charlie Owens and junior Dennis Blyashov scored four goals apiece to keep Harvard in the match before Snow’s game-winner.

Harvard had little time to recover from the nail-biter against GW before they had to play in another highly contested thriller. The squad edged out Pomono-Pitzer 17-16 in triple overtime to close out day one of the Harvard Invite. Despite leading 11-7 at the half, Pomona-Pitzer closed out regulation with a five-goal run to tie the match. After trading goals in the first two OT periods, Blyashov gave Harvard the victory with a goal 32 seconds into the sudden-death third.

The victory featured strong performances across the board, with four different players contributing at least three goals. Blyashov and junior Jackson Enright each contributed four goals apiece to pace the team’s offense and lead Harvard to victory.

Harvard began the second day of the Harvard Invite with yet another close match, this time outlasting Bucknell 9-8. The team’s offense was largely stagnant during the first half, falling into an early 3-0 hole. But it roared to life at the end of the second quarter, beginning with Alex Tsotadze scoring a 5M penalty shot for the team’s first goal. The team stormed back with a four-goal run in the third quarter to take a 6-5 lead, and fended off a late push by Bucknell to earn the victory.

Sophomore Noah Hodge worked hard to keep Harvard in the match, finishing with a stellar 16 saves. He finished with 38 saves across the event’s first three matches.

“I’m really proud of how our team fought through adversity this weekend, especially on the first three games of the weekend,” said Hodge. “We knew that the games would be all around tough games, but we were confident that if we played our game, we would come out 4-0, which is exactly what we did. Our team’s cohesiveness as a unit drove us through those victories and allowed us to continue our unbeaten run thus far.”

“The weekend was a big weekend for us. The close games gave us a chance to test ourselves and battle adversity,” added Owens.

Fresh off of three hard-fought victories, Harvard closed out the event with a bang by steamrolling La Salle 18-4. Harvard did not trail once during the match — Owens scored 17 seconds into the match and the team never looked back as the squad put together a six-goal run in the second and third quarters. 10 different players scored for Harvard en route to the dominating victory.

After its most recent victories this weekend, Harvard’s win streak currently stands at 22. As it tries to extend that this season, the team will stay alert and try to avoid complacency.