‘Read My Lips’: The MFA’s Latest Exhibit Gets Mouthy 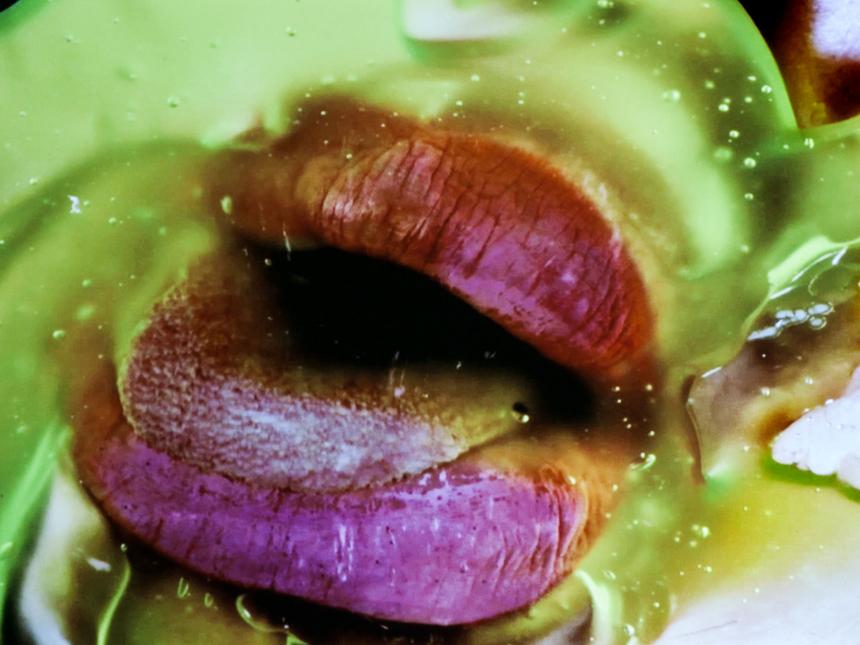 Marilyn Minter's "Green Pink Caviar" is one of the videos shown in the new MFA exhibit "Read My Lips." By Courtesy of the Museum of Fine Arts, Boston
By Emerson J. Monks, Contributing Writer

This autumn, the Museum of Fine Arts in Boston has a plethora of new exhibitions. In addition to several new, comprehensive displays of art — including a showcase of Nubian art and a cross-section honoring oft-overlooked female artists — on Saturday, the MFA launched three new exhibitions: one on contemporary art, one on African aestheticism, and one on the mouths of women.

“The four videos installed in the Krupp Gallery consider the female voice — where it’s accepted and how it’s suppressed; its treatment as simultaneously alluring and repulsive; and its relationship to the body,” the MFA’s description of the exhibit reads.

The exhibit consists of four videos by female artists playing in loop in a small, dark room. Printed on the back wall, in bright pink text, is a quote from Bella Abzug, an American social activist and lawyer.

“Women have been trained to speak and carry a lipstick. Those days are over,” the quote reads.

Abzug plays a dominant role, in fact, in one of the artist’s pieces. Her words are concomitant with a greater theme — the politicization of women’s voices — throughout the exhibit. A display by Sharon Hayes compiles a transcript of a conversation between Abzug and her voice coach, formatted like a retro teleprompter.

In keeping with Abzug’s voice training, other pieces in the exhibit highlight and accentuate gender performance. One of the works of art, a video entitled “Hand to Mouth” by artist Patty Chang, features an off-screen hand thoroughly dousing the artist with a balloon filled with water and helium. The artist shot the piece on Super 8 video film, and in doing so, imitated a cheap pornographical movie. Chang herself spends the entire film shouting and whipping her head back and forth.

Similarly, Marilyn Minter’s film “Green Pink Caviar” features a woman’s mouth lapping up and spitting out pink, green, silver, and gold slime. Her lips press against the screen, both flattened and enlarged. Before featuring in the exhibit, the video formerly played on commercialized billboards in Sunset Boulevard and Times Square.

All pieces explore the female voice as a concept and communal experience. The exhibit attempts to connect to the women coming in and out of the museum and their shared experiences of sexualization or repression. A video by VALIE EXPORT, an Austrian artist, films a female larynx opening and closing as the artist recounts a poem. The oration sounds as if the narrator is choking, airways constricted.

As visitors to the MFA passed in and out of the exhibit, they had varying reactions to the pieces. Many spent a significant amount of time at each individual piece. Others came into the exhibit, saw the mouths, and left almost immediately. Visitor Kristina Bronson said she took issue with the element of the grotesque in the exhibit, and felt that it had gone too far in deromanticizing women’s mouths.

“I’m disappointed to see that the images are so unappealing,” Bronson said.

But other guests said they were intrigued by the exhibit’s viscerality.