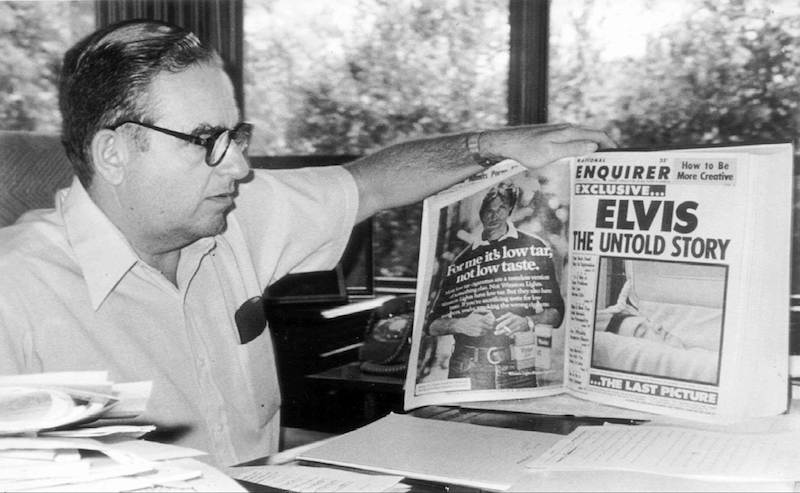 “Scandalous” aims for piping-hot controversy, but settles instead for lukewarm praise.

The documentary chronicles the rise and fall of the salacious National Enquirer, one of the most sensational, prurient, and exploitative publications in the history of the United States. The film follows the newspaper from its origin as a more serious journalistic periodical under the name the New York Enquirer, to a grisly “gore rag,” to a celebrity gossip magazine. The documentary glosses its various headlines and scandals over the years, from the death of John Belushi to the O.J. Simpson trial.

The documentary also acts, in large part, as a justification for yellow journalism, or journalism founded upon hyperbolic caricature rather than, frequently, actual fact. The National Enquirer is famous for its staggeringly lurid headlines, many of which feature prominently throughout the documentary. It’s a tabloid based on shock value and insidious backroom deals, and often, the actions of the journalists and staff were just as sordid as the celebrities themselves.

The documentary argues that aspects of the National Enquirer’s particular brand of journalism are not only understandable, but also justifiable. It spends considerable time lauding the benefits of a career as a National Enquirer journalist — the travel to luxurious destinations, the considerable paycheck, and the glamour of being on a first-name basis with celebrities. It even commends the journalistic integrity, in part, of Enquirer reporters and photographers who covered high-profile events like O.J. Simpson trial, where newspapers like the New York Times and the Washington Post also vied for coverage.

What makes this argument ineffective, however, is that the documentary does not fully commit to its own stance. Rather, it toes the line between firmly advocating for and against the Enquirer, settling on an equivocal middle ground. This obscurity produces a murky, uncertain final message. Was the Enquirer a pioneer of its time? It did, after all, expand from typical news subjects and reach a more general audience in a deeply personal sense — lighter, fluffier news was far more palatable to the average reader than complex political examinations or depressing violence and despair.

But “Scandalous” also makes an argument that the tabloid contributed to the fake-news mass-media sensation that has come to define journalism of the 21st century. The whole point of “Scandalous” seems to be that the Enquirer was a sort of ambivalent phenomenon that was neither good nor bad, but rather simply influential. The documentary does not, however, address this dubiety effectively — it diverts its efforts from the examination of media ethics to the coverage of various celebrity horror stories, from Marla Maples, to Whitney Houston, to Arnold Schwarzenneger.

Perhaps more problematic than its uncertainty in judging the merits or demerits of the Enquirer, however, is that “Scandalous” ultimately fails to emanate the voyeuristic pleasure of the tabloid itself. In a very real sense, the Enquirer has a rich history fraught with extortion and blackmail; it has leveraged secrets of infidelity and drug usage against celebrities like Bob Hope, Bill Cosby, and Jeff Bezos, all with varying degrees of success. The way in which these tales are related fails to grasp the unique pleasure in assuaging one’s own boredom by peering into the colorful lives of the rich and famous.

Furthermore, instead of delving deep into the politics within the tabloid, “Scandalous” focuses on trivial anecdotes from the magazine’s golden age, when its circulation numbers were not in the thousands, but rather in the millions. In doing so, it fundamentally loses the rich opportunity to expose more about the drama behind the publication itself.

There are moments within “Scandalous” that ring true. One of the most compelling aspects of the film are the interviews of tabloid journalists, who relate conflicts of journalistic integrity and the lengths to which they had to go in order to cover a good story. In attempting to uncover the death of John Belushi, for example, several journalists befriended Catherine Evelyn Smith, his drug dealer, and coerced her into a confession that would eventually land her in jail. There is an enduring, provocative question throughout the documentary of when enough is enough, when a reporter has finally gone too far — the long-debated role of the “Enquirer” in the Princess Diana scandal is a perfect example. Do celebrities have to pay a price for their fame? Are tabloids truly responsible for their ultimate downfall?

“Scandalous” is neither a particularly great documentary nor a strikingly bad one. Rather, it remains somewhere in-between. It lacks, somewhat ironically, the striking shock value of the Enquirer itself.