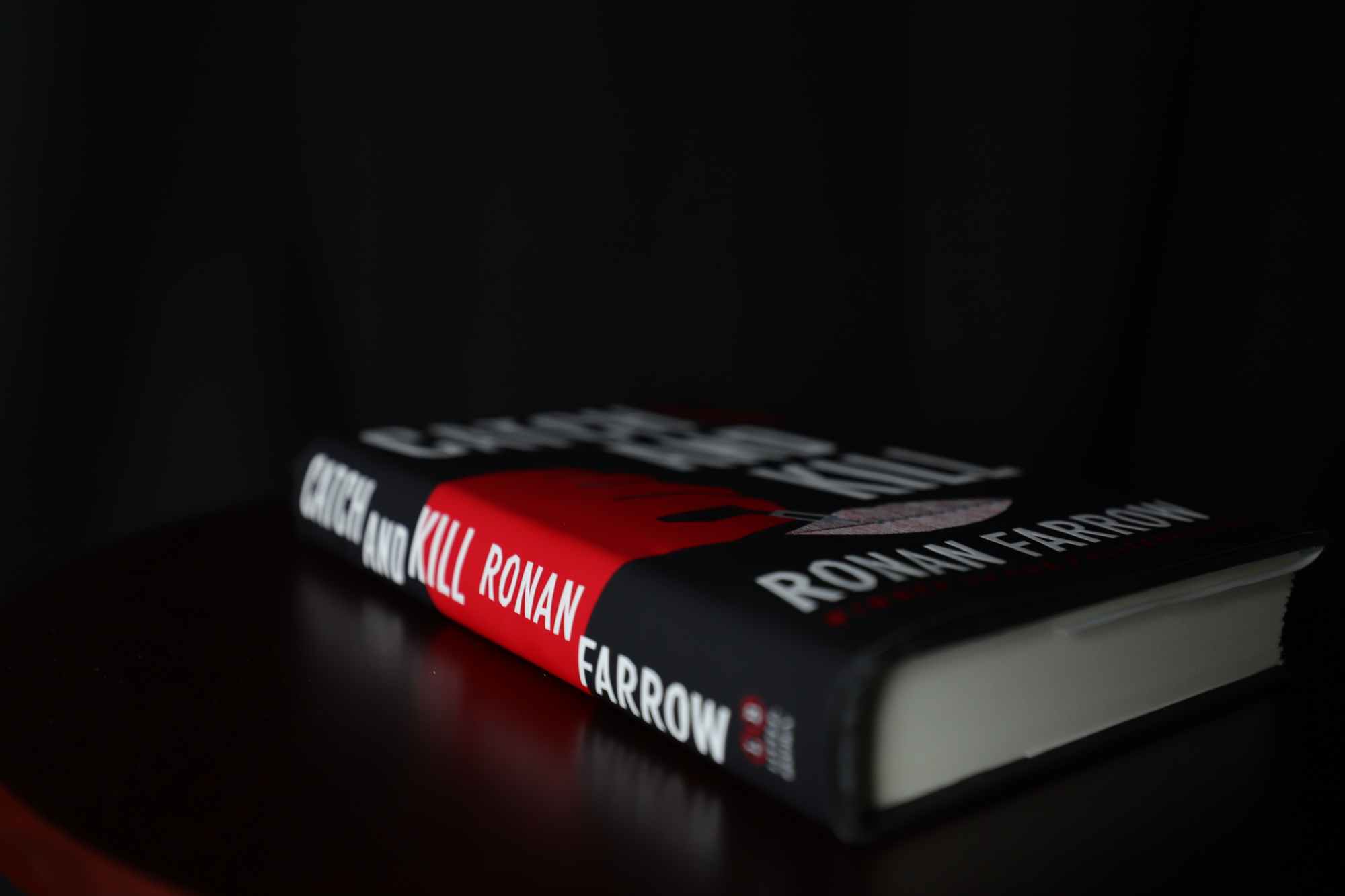 The Harvard Bookstore recently welcomed Ronan Farrow, a Pulitzer-Prize winning investigative reporter, for a discussion of his highly anticipated book, "Catch and Kill: Lies, Spies, and a Conspiracy to Protect Predators".
Advertisement
Advertisement

Ronan Farrow Is the Real Deal

Farrow's new book paints the picture of a system of intimidation operated by powerful men in order to silence their accusers — one full of spies, lies, and shadowy contracts.
By Saima S. Iqbal

It’s a Thursday afternoon in the sleepy town of Arlington, Mass., and close to a thousand Boston locals — clusters of young women and old married couples — filter through the red brick streets. Some link arms against the bitter autumn wind as the masses head straight for John Hancock Hall. The theatre is airy and full of velvet; it radiates glamor. Overheard chatter — “Did you read so-and-so’s review in the New York Times?”— makes me feel like I’m at the opening night of a hit play.

His new book paints the picture of a system of intimidation operated by powerful men in order to silence their accusers — one full of spies, lies, and shadowy contracts. A representative from the bookstore says “Catch and Kill” is “perhaps the best noir of the year, only made more chilling by the fact that it is true.”

And yet the atmosphere in the theater is anything but grave. During the talk, Farrow peppers his comments with Tweet-worthy quips, to the evident delight of an audience that can’t seem to get enough of him.

Young appears equally enamoured with the book and walks the audience members — many of whom have not yet read it — through the highlights. Farrow jokes, semi-seriously, that she should avoid any “spoilers,” a comment that gestures toward the book’s novelistic quality. He refers to the dizzying details of his reporting as the book’s “plot,” and points to the eerie but unintentional “foreshadowing” in his earlier reporting.

Farrow also takes pains to emphasize the meticulous, journalistic fact-checking undergirding the book. He cites his background as a lawyer, which he thinks makes him inherently skeptical; beyond that, he says, his editors at the New Yorker “scrubbed the manuscript clean.”

The conversation focuses on what it was like for Farrow to report these stories, as opposed to highlighting the stories themselves. When Farrow first sets foot on stage, Young mentions that NBC has just accused him of being a “terrorist” for reporting on the media outlet’s attempt to “catch and kill” stories on Weinstein. He deflects the comment with a joke — “That’s making it to my Twitter bio” — and moves on. She probes him later about what it was like being followed by Harvey Weinstein’s spies. “They were like Tweedle-Dee and Tweedle-Dum,” he says, recalling how the two men spent three days pursuing the wrong blonde man.

Suddenly earnest again, he recognizes the women and whistleblowers who “made [his] work possible.” “I was just a conduit for their stories,” he says.

But these comments do little to turn the focus away from Farrow the celebrity, the wunderkind child of actress Mia Farrow and Woody Allen. For 20 minutes, Young and Farrow discuss his relationship to his mother; his sister Dylan, who has accused Allen of sexual assault; and his engagement to former Obama speechwriter Jon I. Lovett. Time and time again, Young says to Farrow: “you’re the real deal.” I get the sense that she’s referring not just to his journalistic merits, but to the romantic image some have of him: charming, eloquent, principled.

Young attempts to circle back to the women at the heart of the story, and asks Farrow to “say the names of the brave women” for the audience. He pauses, notes that many of the whistleblowers he spoke to have not revealed themselves publicly, and mentions a few: Rose McGowan, Ambra Gutierrez. For once, the audience is still.

But as the event ends, the chatter shifts back to Farrow himself. “He’s very engaging,” one audience member says as we file out of the theater.

“He looks exactly like his mother,” says another. “Maybe with some Frank Sinatra mixed in.”