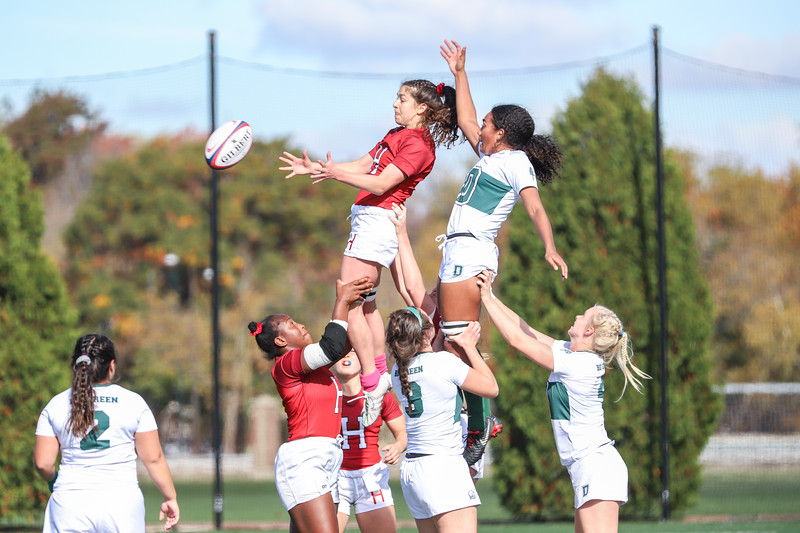 Harvard was unable to top its rival Dartmouth, but a rematch is scheduled next month. By Quinn G. Perini
By Lucy Connor, Crimson Staff Writer

This past weekend, the Harvard women’s rugby team (5-1) fell to Dartmouth (2-2) in the Ivy League Championship, 41-22. The Crimson beat the Big Green early on this season in September, 50-32, but the team was unable to channel that same energy in order to see a similar result this past Saturday.

“We always go into Dartmouth games knowing that they are going to be a really challenging opponent,” senior captain Robyn Beese said. “In preparation for the game, we emphasized the mental game because we knew we had the ability to beat them, but only if we were completely switched on and fully present for the entire 80 minutes of play.”

The first half consisted of steady and intense back-and-forth scoring. Dartmouth got on the board first with an early penalty kick, but Harvard responded with Cassidy Bargell’s try in the 27th minute. At the end of the first half, Dartmouth had the lead, 10-7.

“We played really well in the first half. Every set was super strong and Dartmouth was unable to break our line,” Beese said. “They only scored on lucky breaks or capitalizing on our personal mistakes, such as dropped balls.”

In the beginning of the second half, the two teams continued to score and respond. After ten minutes of back-and-forth play, and tries from Harvard players, sophomore Sofia Fella and first-year Achele Agada, the game was tied at 17-17. However, a few costly errors swung the momentum in favor of the Big Green, and Dartmouth took the lead 29-17. Harvard was unable to respond effectively and regain its previous intensity.

Harvard senior Sarah Lipson’s try with six minutes left was not enough to bring the Crimson back into the game, and Dartmouth left the field victorious with the Ivy League trophy in hand.

However, this is not the last time these two teams will see each other this season. Harvard will have an opportunity for vengeance when the team sees Dartmouth in two weekends in the NIRA semifinals. The Crimson will focus on fixing mental errors and basic mistakes in the next couple of weeks in order to be successful.

“It is good to know that we are in control of a lot of the mistakes we made. We have a good handle on the adjustments we are going to make,” said senior captain Emily Prentice. “We just need to work on our execution. We’re focused on mitigating the small errors and turnovers, and capitalizing on the opportunities we have.”

Dartmouth won the Ivy League Championship three years in a row, from 2015-2017, but Harvard ended the Big Green’s streak with the Crimson victory last year. Though the Crimson won Ivies, Dartmouth defeated Harvard in the NIRA tournament. The Harvard-Dartmouth women’s rugby matchup has evolved into an intense, unpredictable rivalry that always presents a fierce and engaging game.

“We make each other better and we push each other. Having Dartmouth in the Ivy League with us is just not only helping our team advance, but it also helps advance Ivy League rugby in general,” said Prentice. “It’s exciting because at any given point it could go either way. It is a really special opportunity to play them multiple times a year.

The rivalry is not one out of hatred or contempt, but out of respect. These two teams continue to challenge one another, improving both teams and the game of rugby as a whole. The next matchup on Saturday, November 9, is sure to be one of intensity and ferocity.