‘The Purists’ is Grounded, Human, and Unresolved 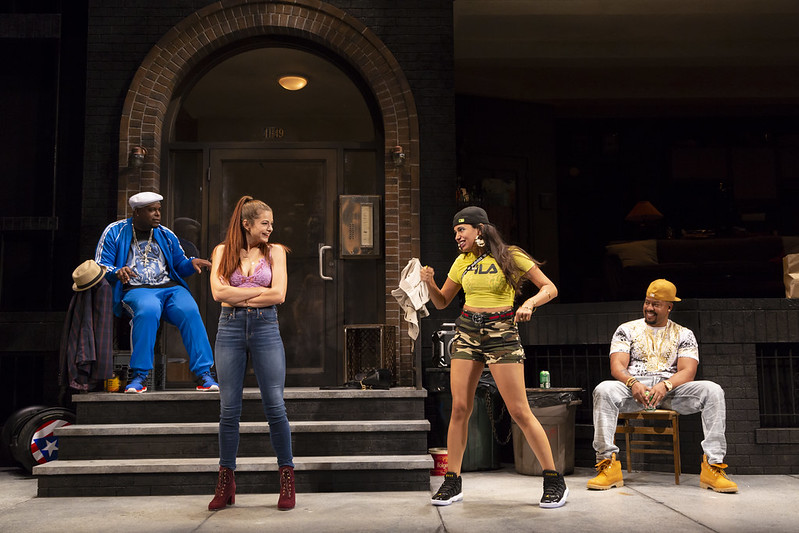 The Cast of 'The Purists' By Courtesy of T. Charles Erickson
By Jenna X. Bao, Crimson Staff Writer

Should an art form, or a culture, be forever tied to its origins? Is some art meant only for specific populations? Is evolution progress or destruction? “The Purists,” written by Dan McCabe and directed by Tony Award-winner Billy Porter, asks all these questions in a play revolving around three old men and the apartment stoop they occupy for hours each day. “The Purists” is a gripping story of music, change, human connection, and much more, steeped in hip hop culture with several impressive rap performances.

“The Purists” revolves around its characters, and each one has depth and nuance. There are only five characters: Lamont Born Cipher (Morocco Omari), a former rap legend, self-described “alpha male” passionate about preserving hip hop, Mr. Bugz (J Bernard Calloway), a legendary DJ forced to come to terms with his sexuality, and Gerry (John Scurti), an elderly, bisexual, musical snob form a core trio, rounded out by two young female MCs, Val (Analisa Velez) and Nancy (Izzie Steele). Each and every character is flawed yet redeemable, broken yet loveable. They all fit together perfectly to complement one another in a story ultimately driven solely by their conversations (and rap battles).

Each character has their flaws. Gerry consistently makes racist statements (while complaining about PC culture) while Lamont expresses blatantly homophobic sentiments and behavior. Gerry detests everything that isn’t classic, Sondheim-esque musical theater, while Lamont lives for old-school hip hop. Meanwhile, Bugz serves as a liaison between the two as he finds his own views on music and sexuality shifting. There is nothing simple about their relationships with one another; often, they can’t stand one another, and yet they consider each other close friends. Better yet, the writing and convincing performances pull off this dynamic so that it doesn’t seem far-fetched, but beautifully genuine. At the core, the play is about the messy contradictions inherent in human relationships and finding connection despite the odds.

The two female characters, while they have fewer lines, are also well developed, with idealistic dreams that contrast with their older, jaded male counterparts. Val is a rambunctious Puerto Rican drug dealer who pours everything into her rap career, while Nancy is a bubbly white telemarketer running a one-woman hip hop musical about the life of Amelia Earhart. Despite being set up in stark contrast and pushed to competition and comparison with one another, they’re able to connect over their passion for rap, distaste for misogyny in hip hop, and deep drive. These five jagged pieces fit together perfectly as each one forces another to grow and confront their own misconceptions, and viewers find themselves invested in each of their journeys.

Music also plays a central role in the play in every way; it’s not just in the dialogue but it’s used as a form of expression and symbolism throughout. In the first scene, Gerry’s record of “The Sound of Music” is cut off by Lamont approaching the apartment blasting rap from his boombox. No conversation is complete without references to musical artists, while Val, Nancy, and Lamont each perform several raps built into the narrative. The play could perhaps be best appreciated by hip hop fans, but the compelling dialogue and lyrics leave plenty of access points for strangers to the genre with an open mind. The integration of the performances feels seamless and helps the play maintain a sense of momentum and energy in what is essentially two hours of dialogue in and in front of an apartment building. Yet music is also used to symbolize the apparently fundamental differences between characters, like Gerry and Lamont’s polar opposite tastes (yet strikingly similar views on purism), and critiques of the contemporary rap scene bring challenging questions about racism, class, and masculinity.

In fact, what may be the play’s primary shortcoming is that it raises more questions than it can answer. Or, perhaps it sees those questions as too personal and nuanced to fully answer. As a result, the show ends at what feels like a climax, rather than a resolution. Relationships are tested and strengthened, and long-held views are challenged, but it’s unclear whether any of the characters really come out on the other end with growth. Some characters criticize misogyny in rap, while others insist it’s merely a result of powerful figures in the industry without coming to any consensus. If Gerry can come to admire Nancy’s efforts to create something new in the theater space, but he and Lamont still express unrelenting distaste for art that defies tradition, what is the piece trying to say about purism? The play doesn’t seem to provide an answer. Certainly the audience is challenged to grapple with these questions for themselves, but they’re also left craving a deeper sense of resolution. Yet even that goes back to the careful development of each character, so their stubbornness feels authentic instead of just frustrating, and their conflicts are heartbreaking rather than perplexing. As much as viewers will walk away with big questions, the character and relationships in “The Purists” they won’t be able to get out of their heads.

—Staff Writer Jenna X. Bao can be reached at jenna.bao@thecrimson.com.